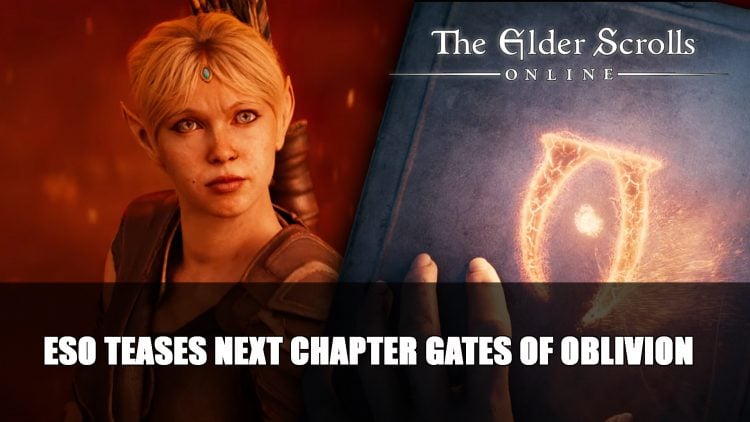 Zenimax reveals the next chapter to unfold for the Elder Scrolls Online, teasing Gates of Oblivion.

The latest trailer release by Zenimax which was shown at The Game Awards 2020 today, revealed that the next adventure will be Gates of the Oblivion. The short teaser didn’t reveal all but did share a few hints of what it will entail.

It showed character Eveli Sharp-Arrow asleep, tormented by a book laid next to her. In her visions we see hell, the Gates of Oblivion, with the Daedric Prince Mehrunes Dagon, while the Oblivion symbol, an “O” in Daedric letters, is seared into the book. It looks like Dagon will be the next villain of this expansion, but there’s not much else to go on from the trailer.

Zenimax have however announced a big reveal will be happening on January 21st 2021 at 5PM EST. Director of the studio Matt Firor and Bethesda Softwork’s senior vice president of marketing and communications Pete Hines will introduce the next chapter, with a year-long themed adventure.

No, we’re not time traveling. Can 2020 please end already. pic.twitter.com/U18hvxpuNy

This is similar to what happened with the previous expansion Greymoor, which was teased at TGA 2019, and then big reveal event happened later on. We’re looking forward to hearing where the next expansion will take players. 2021 also marks the 15th anniversary of the original The Elder Scrolls IV: Oblivion game, so this is quite fitting.

For more TGA 2020 news, be sure to read next Dragon Age 4 Teased Once Again With New Trailer and Crimson Desert Gets Gameplay Trailer At TGA 2020.