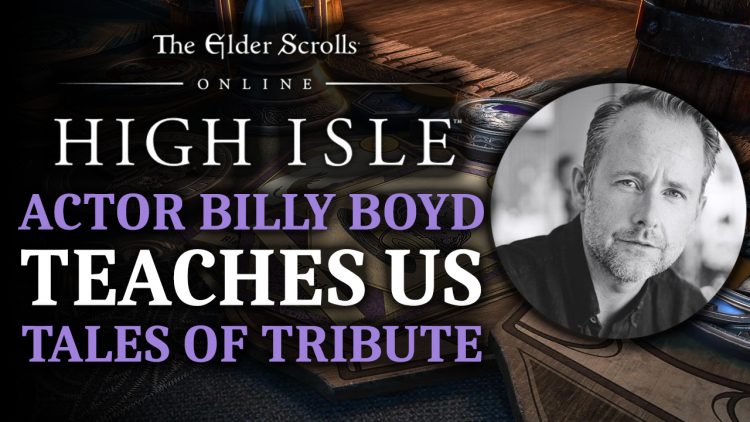 Elder Scrolls Online is ramping up its marketing just before the release of the High Isle Chapter on June 6, 2022. Part of this expansion is the much-awaited Tales of Tribute card game, similar to The Witcher 3’s Gwent.

ZeniMax Online Studios recently shared a trailer for The Elder Scrolls Online. In it, we see Billy Boyd, famously known as Pippin in The Lord of the Rings Trilogy, in the middle of voicing the Wood Elf Brahgas. He introduces himself as a “professional gambler and semi-professional everything else.” This new character will guide the player in understanding the Tales of Tribute minigame.

This is quite similar to Gwent, which was initially introduced as a game within a game in The Witcher 3. Similarly, you will seek out NPCs who are interested in playing you in Tales of Tribute. It is definitely a deck-building game. In addition to doing battle against the AI, players will also get the option to test their skills against other humans via the Activity Finder.

Up for a Round of… Tales?

One of the things Brahgas encourages is for people to have fun. “People need a place to relax, chum. The ancient anchor’s fine for sailors on shore leave. But people looking for a really good time always come here. Go out and win some games, my friend. It really is true that experience is the greatest teacher, especially when it comes to Tales of Tribute. I’ll be rooting for you the entire way”.

Boyd really got into his character and seems to have enjoyed himself immensely playing it.

What is the Tales of Tribute?

Tales of Tribute is a card game that was conceptualized back in 2009 for Elder Scrolls Online. According to ESO Creative Director Rich Lambert, he initially pitched the idea of having an alternative game in the universe. He envisioned a place where players will hang around with the purpose of having a good time while learning more about the MMORPG’s lore. 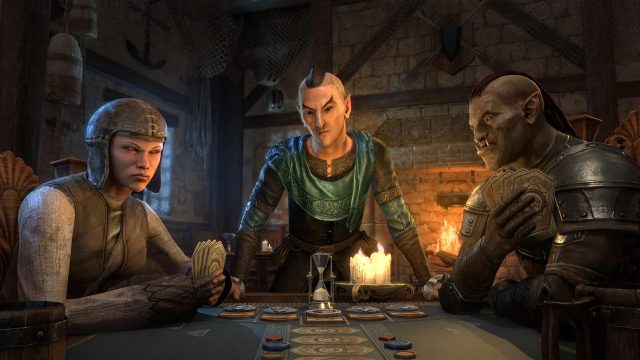 Tales of Tribute has 8 “patron decks” to collect. Each patron has a different playstyle from the other. Initially, you will unlock four Patrons upon finishing the tutorial. These are Loremaster Celarus, Delmene Hlaalu, Duke of Crowns, and St. Pelin.

Players will have to participate in Tales-related quests and achievements to gain access to the other four decks. These decks are also part of the drop pool in the High Isle Chapter so it is something to look forward to while you are progressing in ESO!

Right now, the team’s focus is on implementing the first public iteration well enough before moving on to new heights. Eventually, this could lead to the possibility of creating a standalone version akin to Gwent, Thronebreaker, and Hearthstone.

How does Tales of Tribute work?

The ESO team released a Tales of Tribute Guide detailing the basics of the card game a few days ago. So now we can give you a glimpse of what to expect.

At the beginning of every match, each player will prepare two patron decks that contain 40 cards in total. This, as well as 20 neutral cards, will then be shuffled into what is known as the Tavern. The Tavern is where you and your opponent will draw cards from. 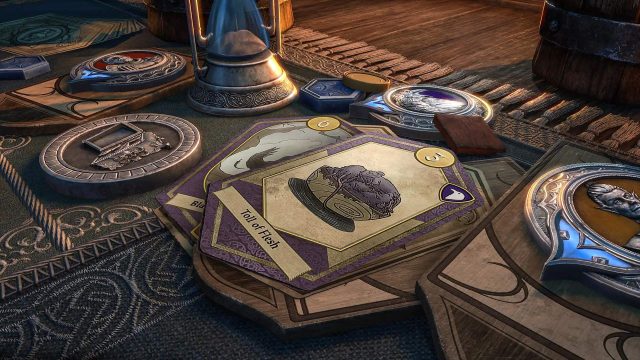 Patrons can be activated to unleash powerful special effects, much like Leader Abilities in Gwent. The power of patrons is quite significant. It is also important to remember that you will have certain cards which will allow you to use the boon of the enemy’s patron… if you wait patiently.

To defeat your foe, you must remember 2 things. The first is to accumulate 40+ Prestige. This number is gained from your cards or patron’s abilities or if you manage to convert Power. Once you reach 40, you ought to maintain that lead such that the enemy will no longer be able to catch up with you.

Alternatively, if you reach 80 Prestige you will take home the crown! The second way to victory is by gaining the favor of all Patrons in the encounter. This can be done by trading certain resources such as cards, Power, and Coin. If you secure the trust of these 4 Patrons regardless of what your Prestige Score is, you win.

Tales of Tribute has a 90-second turn timer in both ranked and casual matches. You only have 90 seconds to complete your moves, otherwise, your turn automatically ends. This may be a rather long time to make decisions about your actions unless they are extremely complex.

Billy Boyd joins a list of famous personalities who have voiced ESO throughout the years including the likes of Bill Nighy as High King Emeric, Kate Beckinsale as Queen Ayrenn, and Malcolm McDowell as Molag Bal, to name a few.

Looking even further back into the Elder Scrolls Universe, we can find even more. Who can forget Sir Patrick Stewart as he played Uriel Septim VII in Oblivion? Or that it was Sean Bean who played Martin, the emperor’s son?

The list goes on and on and one cannot deny how excellent voice acting in the entire Elder Scrolls universe.

The High Isle Chapter was announced back on January 28, 2022. The focus this time around centers on the Legacy of the Bretons as well as their background. The expansion is expected to provide over 30 hours of content including Tales of Tribute, 2 new Companions, World Events, World Bosses, and more.

Elder Scrolls Online’s latest chapter will release on June 6th for PC, Mac, and Stadia owners. Console players will be able to get their hands on it later on June 21, 2022. The expansion will cost $39.99.

With the energy and passion of people like Billy Boyd tied to the project, we can expect to be in great hands.