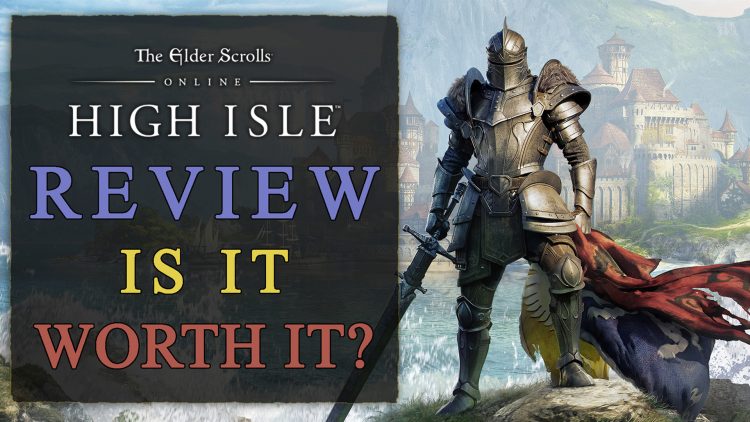 The latest chapter for Elder Scrolls Online is High Isle which releases today for PC. The expansion takes players to the Systres Archipelago which all follows the theme of The Legacy of the Bretons. Mystery, politics, volcanic vents and a new card game to best will all be a part of the journey. The expansion introduces two new companions, reintroduces some familiar faces, and unravels more about The Ascendant Order.

The Elder Scrolls Online High Isle follows the Three Banners War and The Ascendant Order. The Ascendant Order are a group who have the intention to put a stop to peace talks designed to put an end to the war. These rogue knights are now wreaking havoc in High Isle, posing a threat to not just the area but the leaders. The story begins with ships that have gone missing in Kynareth under some mysterious circumstances. Some believe it was the storm but storms are unusual for the area, and so the plot thickens. 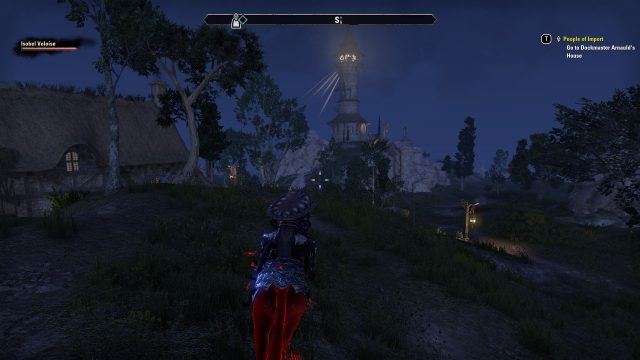 But what exactly is High Isle? The region is treated as a place where the rich and wealthy can go to relax and unwind, a sort of holiday destination. It’s also been picked for its remote location in the Systres Archipelago as it’s perfect for secret peace talks. The area is located southwest of Daggerfall, and it is here where players will get to explore the different isles.

While previous expansions have had quite big face-offs with the main baddies of the game, such as Mehrunes Dagon in Blackwood, High Isle follows a different approach. This chapter focuses more on the nuances of political factions and lore that any Elder Scrolls lover will enjoy. That being said there is still plenty of action.

A few familiar faces are also involved with Jakarn providing some comic relief and distraction when needed. Khajiit Captain Za’ji from Southern Elsweyr also makes an appearance, and if you’ve played the intro quest for the chapter, you’ll have met Lady Arabelle.

One of the big additions to ESO in High Isle is the introduction of a new card-collector mini-game called Tales of Tribute. We actually went over some of the features of the in-game tabletop in our preview earlier this year, however getting more time to experience it I got a better feel as to how this works within High Isle.

In case you missed it, Elder Scrolls Online is no stranger to activities you can take part in between your main questing, exploring and dungeon fighting. With the addition of Scrying in Greymoor, a new way to spend your time in Tamriel is in the cards. Heading to the gaming hall in Gonfalon Bay you can embark on your card quest to earn rewards and unlock dailies for Tales of Tribute. The game gets its own introduction and tutorial by Lord of the Rings actor Billy Boyd, who played the infamous hobbit Pippin. 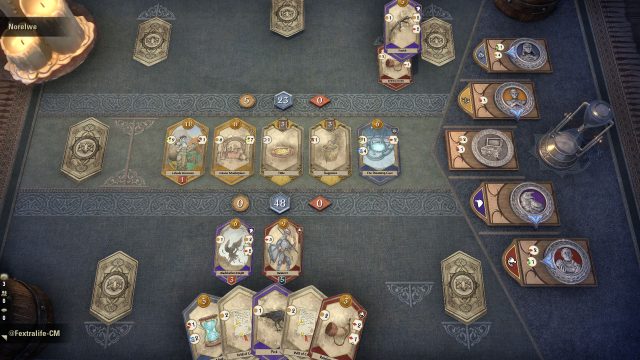 Playing against others in The Roister’s Club you can gain ranking points. You can also unlock dailies called Kishka’s Challenges which give bonuses and will send you to different regions of Tamriel. It’s great that you can revisit other areas to take on these new challenges.

The card game takes a few goes to get the grasp of it, but once you have the basics down it becomes very addictive. The idea of the game is to win Prestige or you can win by gaining the favour of all the Patrons. What’s interesting about ESO’s Tribute is that you don’t feel as if you’re outmatched by your opponent’s deck, as both players will pool their cards together, meaning you both have chances to purchase cards from the middle of the table which is called the Tavern, and use them in your own hand. Each deck represents a different Patron, with its own set of strategies. Each card has a coin value, a suit and an effect. You can use a mix of cards to defeat your opponent and trigger combos which is where the fun comes in.

While I didn’t have a chance to play against many other players playing early, the NPCs will give you a good idea of what strategies can be used. You will start off with some starter decks, but you can find new decks out in the wild. Games can take some time to complete, depending on the strategies used. I almost want this as a standalone game, however, it fits well into ESO as you can interact with other NPCs to challenge them to a game, and head to different regions to complete these tasks.

The game also feels a bit different to how Scrying was introduced, as Tribute feels a bit bigger in the sense you’re not heading to some random spot to dig for treasure but part-taking in the local inn, making it feel more alive and interactive. While it might not be for everyone, it adds to the world of ESO in a great way. It also rewards players with cosmetics, furnishings, gold, materials and more.

As with the Companions introduced before in Blackwood, there are two new additions Isobel and Ember. Each have some interesting set of abilities a little bit different from the main skill lines players can choose for their characters. They also both have one ultimate, for Isobel she has Baneslayer, conjuring a weapon to downward strike her foes. While Ember has a moving Raging Storm which follows the target to deal damage. Out of the two Ember seems to have the most interesting Companion Skill lines in my opinion for her Sorceress class, as she can conjure weather, lighting and storms. Isobel on the other hand has more knight-like skills, which is fitting for the expansion. 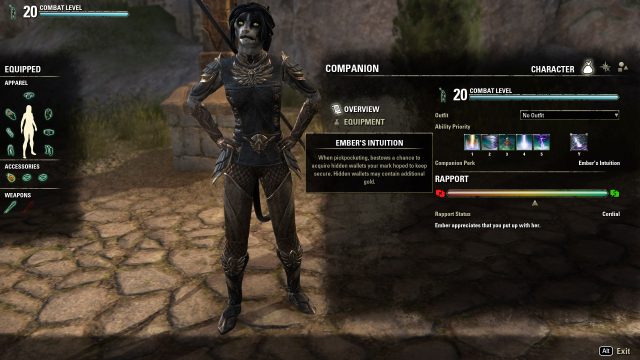 The introduction of Companions was an interesting new feature as it means solo-adventuring doesn’t have to be so solo. The new Companions are great additions, with new Companion Perks to take advantage of. If you’re someone who likes taking down World Bosses, you can gain some extra loot by using Isobel to accompany you, with a chance to gain a slain Knight’s pack. If you’re more into ill-gotten gains, have Ember in tow when you pickpocket to gain an extra wallet of items. 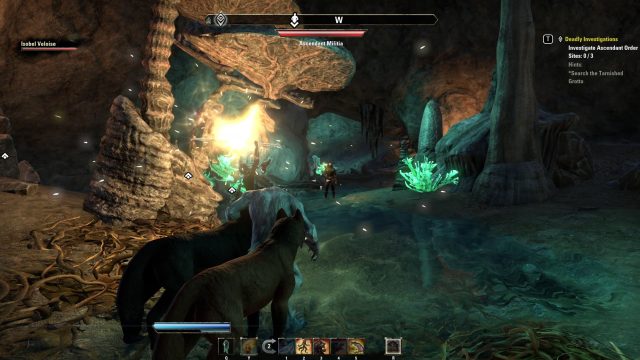 New enemies also await in High Isle, as you will run into menacing Knight Sentinels that will tower over you. There are also Fauns that can be found in the sunflower covered fields, waiting to attack. Along with the main quest players will head to crypts, and take on The Ascendant Order throughout. This was done really well, with highly detailed underground areas which are very atmospheric as you get closer to unravelling more of the truth. If you’re someone who enjoys a full-fledged adventure High Isle won’t disappoint in this aspect. 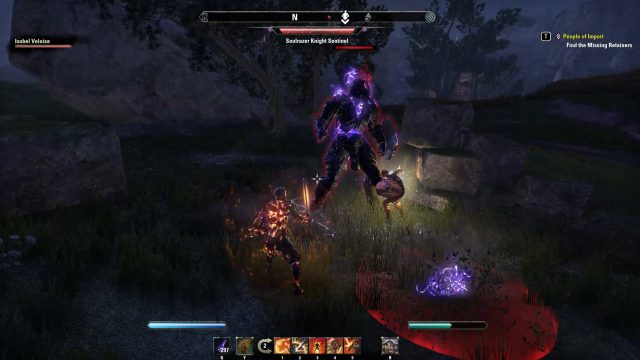 New World Events come in the form of Volcanic Vents, which will feel familiar for ESO players who have taken on previous ones. This time however you will be faced with a number of powerful enemies that not only spawn creatures but also deadly lava and AOEs. This will pose a challenge if you’re in a smaller group as enemies deal quite a bit of damage together with spewing lava.

A new trial called Dreadsail Reef will have players face fearsome Dreadsail pirates and take on a reef full of marine beasts that will not only hit with weapons but have water magic that will pack a punch. New sets are available that come in the form of Coral Riptide, Pearlescent War, Pillager’s Profit and Whorl of the Depths. Pearlescent War is an interesting heavy set as it will give a 5 piece bonus of a boost to Weapon and Spell Damage depending on how many players are still alive. 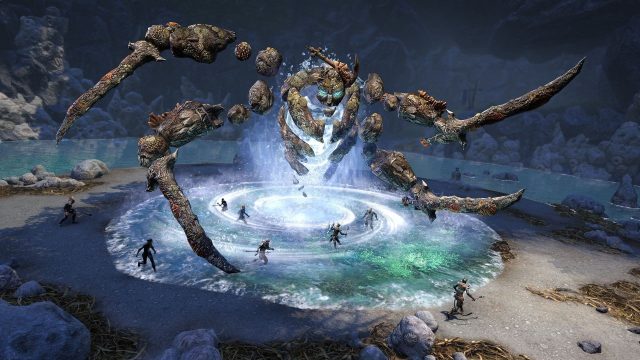 ESO has quite the stacked voice acting experience, and this expansion is no different. Billy Boyd does an excellent job of giving the finer points to the game of Tales of Tribute as Brahgas. While Lady Arabelle is played by none other than Sniper Wolf from Metal Gear Solid herself, voice actress Tasia Valenza. Questing is always a great experience in this MMO, and having such a solid cast of voice actors is very immersive. 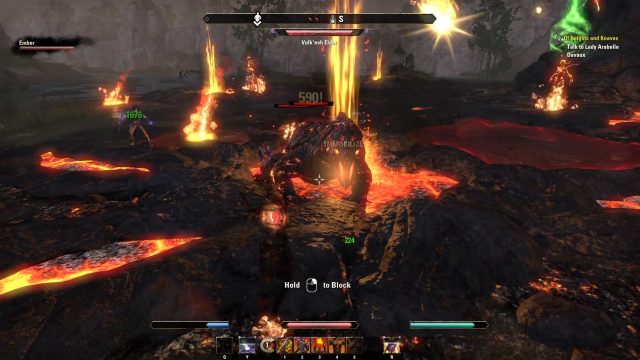 The music is equally a highlight and we’ve been enjoying the main theme for this expansion as well. You can also hear a tale or two from the local bards that sing about Gonfalon. Visually the area is stunning, ranging from idyllic sunflower fields to bustling towns that rival that of the Summerset chapter. The isle of Amenos also has quite stunning surroundings for a place that has a prison. This expansion is a great one to explore as it has lots of curiosities to discover.

Elder Scrolls Online High Isle adds a unique story with this expansion, following a different kind of setup for the narrative which is a welcome change. The new addition of an in-game card game will have many spending time to challenge others and build strategies to best other characters, adding more to do between questing and dungeons. While you could choose not to take part in Tales of Tribute, it’s a fun way to spend time and you’d be missing out on the mini-adventure it takes you on. 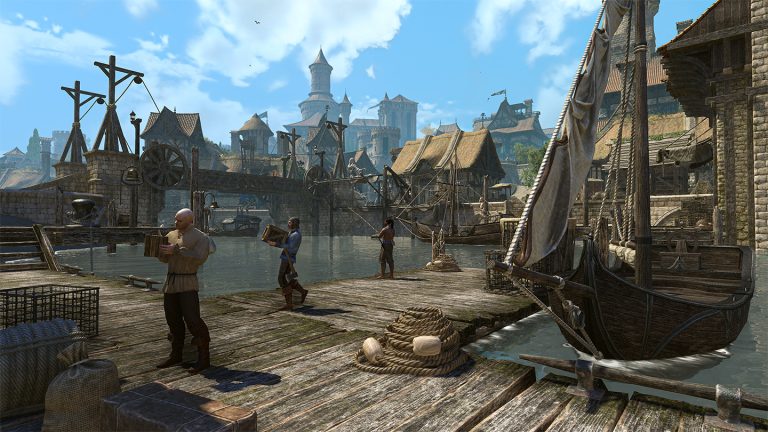 From the docks to the forest region of Amenos, High Isle has plenty to explore

While no new classes arrived with this chapter, the new companions make for some more ways to customise combat when solo adventuring or even in dungeons. I may be a bit biased but I think Ember is probably my favourite out of the two, a quirky Khajiit who wields the power of storms, what’s not to love? If you looking for a new region to discover, and are intrigued by the lore of the Bretons, this will be a fun expansion to delve into. This chapter feels a bit different from the others and offers quite a bit of content to experience as well as a whole card-mini game to master.

Elders Scrolls Online High Isle releases today for PC, and on Playstation and Xbox on June 21st. Be sure to drop by our Elder Scrolls Online wiki for all the latest.

If you enjoyed our review for Elder Scrolls Online High Isle be sure to look out for more ESO content as we’ll be putting out guides for Tales of Tribute so you get all the useful tips and tricks.

7.9
Summary: The expansion holds roughly 30 plus hours of content, not only providing a solid main quest line but also plenty of side quests, Volcanic Vents, new enemies, and card collectible fun along the way. Exploration is enjoyable as the region is split into different isles which can be travelled to by the boat ports. If you enjoy mystery, political intrigue and diving into dark crypts, this one is for you.
Story & Setting (8.2)
Gameplay (7.8)
Audio, Visual & Design (8)
Replayability (7.5)
Pricepoint (8)