The Elder Scrolls Online is heading to High Isle in the latest chapter releasing this June. We got our hands on an early preview of the expansion which focuses on the theme of the Legacy of the Bretons this year. High Isle will follow the quest to end the Three Banner war, but of course, there is going to be adventuring and it’s going to be eventful.

We got to have a hands-on look at the upcoming chapter for MMORPG The Elder Scrolls Online called High Isle. Since we had an early preview, not a final build of the expansion we cannot share any footage from our playthrough but we do have some first impressions and details about some of the upcoming features including a new region to explore, new in-game collectible card game called Tales of Tribute, two new companions, world events and more.

The expansion was headed up with the Ascending Tide DLC, adding two dungeons.

Legacy of the Bretons

The chapter will involve the Three Banners War, and The Ascendant Order. The order is described as a group of rogue knights with their identity shrouded in mystery. What we do know about them is that they want to stop the Three Banners War. While it might sound like a noble cause, their methods to stop it are far from knightly.

What can you expect for the next chapter? The expansion will hold 30 hours of unique story content about the home of the Breton’s as well concentrating on their noble chivalric society. Expect political conflict as three alliances are fractured by the continuing war. 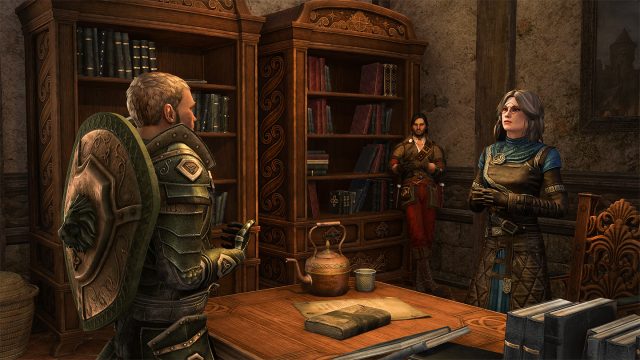 While High Isle is a new story addition, you will run into some familiar faces such as the khajiit Captain Za’ji from Southern Elseweyr and the return of Jakarn the Breton who also appears in Ascending Tide. This expansion looks to tie in some previous characters which is also great for veterans of the game as well as some new ones such as Lady Arabelle. Prepare to unfurl the mystery of The Ascendant Order.

There is plenty of narrative to discover in High Isle, even some interesting side quests. You will have plenty to sink your teeth into when it comes to the stories in High Isle.

What is High Isle?

This expansion takes us into lands not seen before, as it’s part of the Systres Archipelago. High Isle is one of four islands, located southwest of Daggerfall, and has previously only been mapped in Redguard. High Isle acts as a sort of holiday destination for the rich and elite, and because of its remote location, it makes it the best place for secret peace talks among the alliances.

However, not everything is smooth sailing. Not everyone wants the war to end though, as they stand to gain a lot more from the continued animosity than they are when the alliances are at peace. 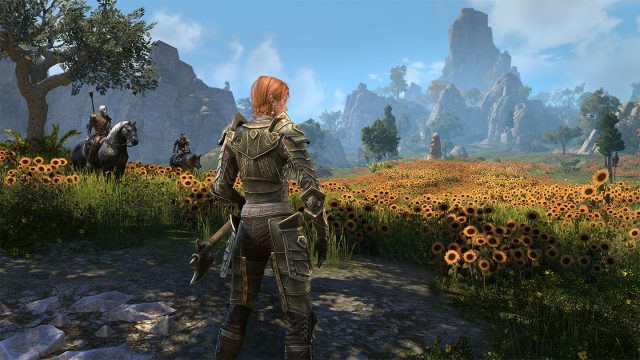 The difference with this chapter area is that the region is split between the isles, which makes for a different experience when exploring. While it looks a little smaller than in previous chapters, there is still a lot to do. The architecture is stunning and has a comparable beauty to that of the Summerset chapter, but of course in a Breton style.

Simply roaming around the place you will find areas filled with curious places such as crypts, mighty castles and also scenery covered in sunflowers. While it does paint quite an idyllic picture, you will run into some new enemies here and there which are quite horrific to fight, some knights that quite dastardly, as well as some new world bosses that you will have to figure out manoeuvres against which are quite a challenge.

As you might imagine the new world event called Volcanic Vents is similar to previous world events, but a lot more fiery, with spewing lava and a number of AOEs. There are numerous creatures and enemies that pop up, and you will need to take them down before they cause some real damage as well as defend, posing some challenges.

A new mini-game is available with this expansion called Tales of Tribute. Between your questing, you can visit the local tavern and play a game or two, not only challenging NPCs but also other players, gaining rewards such as cosmetics, furnishings, gold, materials and more. It’s quite a big addition as you can potentially take on card battles everywhere.

The idea of the game is to win Prestige or you can win by gaining the favour of all the Patrons. In the preview you could visit the Gonfalun Gaming Hall to be taught the rules of the game by Bragus who is eager for a new opponent. Each player has two decks of cards which gives different strategies. What’s interesting about ESO’s Tribute is that you won’t be going head to head with your decks as you and your opponent will actually pool cards together, which adds a twist to the card game. This means you will both have a chance to pick cards in the game, without one player having the unfair advantage of owning better cards which happens too often in games.

The preview on PTS didn’t give a chance to see how we’d be gaining cards but simply set you down to a tutorial match with a set of two premade decks and let you battle against players or NPCs. Since there weren’t too many players on, you could practice against the gaming hall’s opponents. But previously mentioned Zenimax have shared the general idea is you will be able to collect cards and challenge other players as well as characters in a sort of Gwent experience. Each turn players will use their hand to buy new cards from the middle of the table called the Tavern. Each card has a coin value, a suit and an effect. They can also trigger combos if you manage to pick up cards from the same deck, which is where the strategy comes in.

Any resources at the end of your turn will be cleared, except Prestige which will remain. Any power leftover will be turned into Prestige. To even the playing field a bit, the player going second will have more cards than the first player.

Another interesting mechanic is the use of Patrons, who are located on the right side of the table. They represent each of the decks being played and can offer boons/rewards in exchange for payment. Paying a Patron will make them favour you, gaining a boon from them, but each starts out in the Neutral position. If they Favour your opponent, they can be paid to switch them back to the Neutral position and paid once more to Favour you. Each turn only allows you to pay one Patron, so using your turn wisely and anticipating your opponent’s next move is going to be key.

Tales of Tribute is described as “easy to learn but hard to master” and definitely fits the bill, as I can foresee some interesting effects and combo moves that can make the game quite the challenge. Admittedly after completing the tutorial I still had quite a few questions about the rules of the game, as the introduction was quite brief and after some practice you get a better grasp of the rules.

Since the announcement of this new feature, it seems like a welcomed addition to ESO as it will give something for you to do between your usual dungeons, quests, PVP etc. It also looks like a fun way to spend your time especially if you’re a fan of mini-games. While it appears to be an additional feature, it doesn’t seem to be one that you have to partake in if you don’t want to, but from the preview it had me wanting to jump right in and start challenging everyone in sight. Of course this is PTS version of the game, so we didn’t get to see how this works in the open world, but it did give a good idea about the systems, and there could be some tweaks and changes later on.

The Companion system was introduced in the last expansion Blackwood, but we have a couple more Companions joining the ranks in this chapter. The two companions include Ember who is a Khajiit Sorcereress and Isobel a Breton Knight. They both offer new Companion Skill lines, meaning more choice when it comes to solo adventuring.

As per usual companions are collected by taking on their quests just as you did with Bastion and Mirri, which are short but sweet, and provide a good amount of misadventure. You can unlock further quests by gaining rapport with them.

Probably my new favourite companion is the loveable Khajiit Sorceress Ember, while not as sassy as Mirri, is entertaining and has her own quirky charm. She also has a companion perk that will be good for your wallet if pickpocketing is your choice of ill-gotten gains. Pickpocketing with Ember will mean discovering possible hidden wallets with the chance to gain further gold. She also has some interesting skills such as Trickster’s Trap from the new skill line, which will dazzles enemies with a ball of magic, stunning them.

Isobel Veloise, the Breton Knight is a little more straight-edged and has the companion perk of providing a recovered pack after slaying a world boss. More of a tank class, Isobel can help defend you and even heal you with the Healing Grace skill line.

While we don’t get a new class in this chapter, the addition of new companions means more customisation for solo adventuring, and these new companion skill lines are interesting additions.

High Isle offers a new adventuring experience for those curious about the Bretons, as we get to dive deeper into the lore, as well as the antagonists The Ascendant Order. New companions make for an entertaining experience plus offers more skills lines to help round out your build. High Isle is both stunning and full of curiosities, making for another great adventure.

What do you think of these new additions? What are you most excited about for High Isle? Let us know in the comments below.