Recently, we got a hands-on preview of the upcoming Elder Scrolls Online Blackwood, the next chapter coming to ESO this June. While the expansion promises a story that delves into the Gates of Oblivion, one of the stand out features that will have any Elder Scrolls fan excited, is the addition of Companions. Companions will be new allies in your adventures ahead, pretty much going anywhere with you with the exception of PVP and solo arenas. You can take your new companion to help fight the Daedric forces, putting them in any role you see fit, whether that be tank, healer or DPS. In this article, we dive head first into what Companions will bring covering skills, gear, leveling, rapport and first impressions of our newfound friends. Prepare to never fight alone again, well…almost never again.

As I mentioned, Elder Scrolls Online Blackwood is releasing just around the corner, and we were excited to get a closer look at one of the game-changing features, which is probably one of the biggest additions to the gameplay of ESO in quite some time. Companions are coming, two of them in fact, that can accompany you all across Tamriel. While they may seem like any ordinary NPC that occasionally joins you while questing, one of the major differences is that Companions will be at your beck and call. They will also have their own gear and even hold a rapport with you. You might also be wondering can a Companion die in battle? The answer is yes, yes they can, so you better watch their health or you will indeed have to revive them. 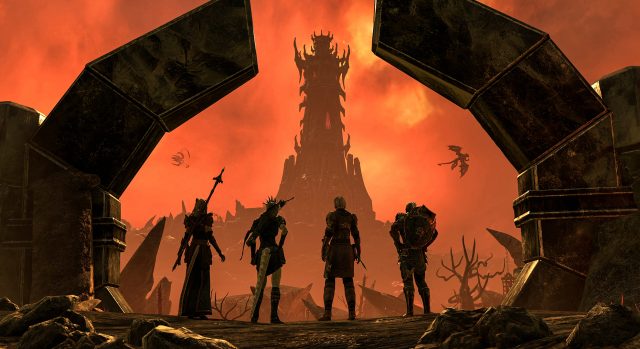 Before I go any further, I should mention that this is an early preview of the Companion system, which is why we can’t show our actual in-game footage, and not all features have been implemented yet, so things could still be tweaked and changed when the expansion launches in June. This does, however, give a good peek into how Companions will appear in the full game, so either way it’s exciting to share more of what’s coming with Blackwood.

How to Gain A Companion

First things first, let’s talk about how do you gain a Companion. Zenimax announced during their livestream covering Blackwood content recently, that there will be two Companions available at the launch of Blackwood, Bastian and Mirri, and both can be recruited by completing their quests, but you can only summon one at a time. As for how many Companions will be add to ESO in the future, this is currently unknown, however as they are added to the game they should be recruitable in a similar fashion. 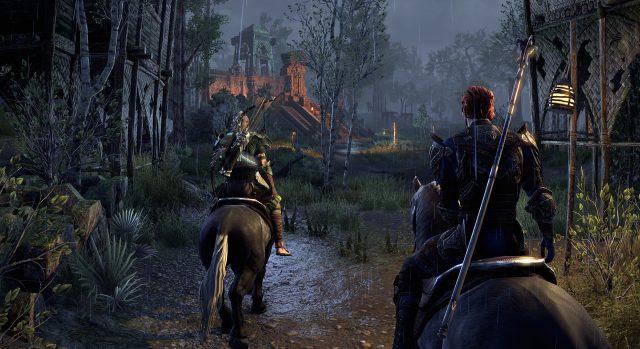 You will go through a whole quest which will introduce you to your Companion, even fight alongside them before gaining them for your Collection. Yes companions are under Collections, but get their own Allies sub-category, so you can easily see which ones are available and set them as active from this menu. I for one am glad Companions get their own story, and aren’t just dumped on you without rhyme or reason. They are actually a part of your adventure and you at least get to know them a little bit before you probably get them killed doing something stupid and have to revive them.

Another thing that makes Companions more than just your average NPC is that you can choose the gear they use. In the preview there were a number of Sets available, each with different purposes to suit the different roles Bastian or Mirri can play. The armor/weapons and accessories are called Companion Items, so you can’t use your already collected or crafted weapons or armor, but you will need to gain sets specifically for them. 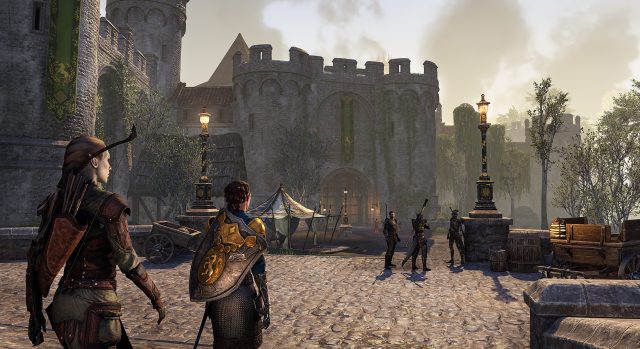 Seeing this I’m instantly thinking of the massive amount of gear I already own and accumulated from dungeons, to try to gear my Necromancer healer and Dragonknight tank, and I’m sort of dreading what this means for my inventory. As someone who suffers from hoarding in most games, I’m wondering if Zenimax will take pity on our poor hoarding souls and grant either a larger inventory capacity or maybe make Companion Items not count as one inventory slot. I’m hopeful, but not holding my breath at this point.

Skills are in the Companion Menu, which you can access by simply talking to your companion. Just like Skills for your characters, they are split into Class, Weapon, Armor, Guild and Racial. One major difference is that you don’t get to choose the type of Class they’ll play as that’s already built in, but instead choose the role they play through Damage, Healer or Tank. You can slot any of these skills in their bar just as you would when choosing your own skills for your character, however Companions only get one Weapon choice, meaning only one ability bar. This simplifies things a lot, as you simply have to worry about which ones to slot, depending on what role or activity you’re doing.

These skills will be used in the order they are placed in your Companion’s ability bar, meaning you don’t really have much control over when they will use them. Since Companions can die, and they did die when I tried using them in battle, a healing ability is probably going to be worth slotting. As far as I could tell, they won’t have access to Potions, but you can heal them with your own abilities. If you’re a Necromancer, I could see a Reanimate ult being useful to quickly pick them up.

There are two bars you will need to worry about for Companions, Combat Level and Rapport. Combat level is fairly straight forward, you can gain XP in the usual way of questing or killing things. And as for Rapport, this will be a bit more tricky.

When Zenimax revealed more about companions they shared that they will react to what you do in the game, meaning illegal activities will hold some weight on what they think of you. They showed a clip of Bastian face palming so I of course wanted to see exactly how this would work in-game. I immediately tested this out by stealing and using Blade of Woe in front of them to see how they’d react. Mirri didn’t mind if I did that, but if you fail and cause the guards to chase you, you will lose some “cool points” with them. If you decided you’re going to do some Blade of Woe-ing but don’t want to risk your Rapport with possible failure, you can simply dismiss your Companion and call them back when you’re done. 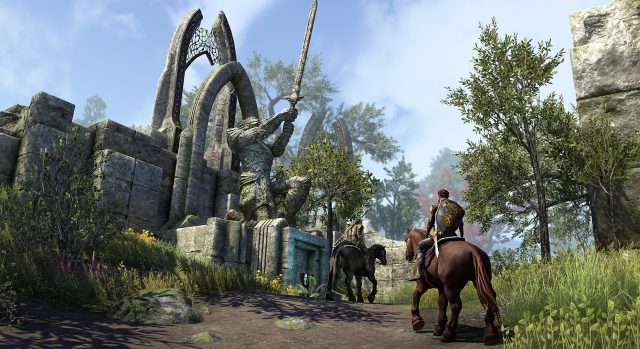 Gaining Rapport will unlock quests for each Companion, opening up more of the story and leveling. Rapport can be a hindrance but I am yet to see how much that affects your companion, as all systems weren’t implemented in this preview. It did give a good overview of how it will work, and I wouldn’t mind working on a relationship with my companion if that unlocks other things such as story. It would be kind of fun if your relationship suffers, will they react differently to you in terms of being more snarky. At the moment you can check how your relationship is going by asking them outright or simply checking the Rapport bar. This has me wondering if there will be more options in the future such as romancing your Companion, but only time will tell.

What truly makes Companions your own is the customization available, you can kit them out with collected Costumes you already have and even choose a mount for them to ride. You could go in with matching looks so they look part of your entourage, and this is a nice touch especially for someone who loves having options when it comes to not only character transmog, but now the option to customize your Companion. You can’t, however, change how their body looks as they are their own character with backstory, but I think this is great for players to have these options. 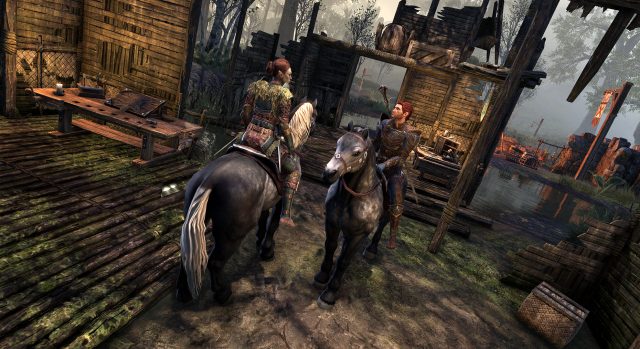 In the preview I had access to I could start either at the beginning, go through the quest of gaining the companion and level from there, start with a low-level character or mid-level at character level 35. I tried each of these, but the mid-level is where I got a better idea of how they will react in different situations when leveling. I had no problem with them aiding me in facing smaller enemies, but I really wanted to see how they’d fare in Group content like Dungeons.

I took Mirri into Elden Hollow 1, and tried a bit of Tanking to see how she would hold up healing and doing some DPS. For the most part it was fine, but it got trickier when there were AOEs, or when she would stand too close to a boss using a melee weapon. It’s safe to say I had to revive her a few times and had to take a different approach to how I would normally deal with said Dungeon. Reviving is exactly the same as rez-ing another player, so sometimes I didn’t have time to pick up Mirri, and had to choose my moment wisely. 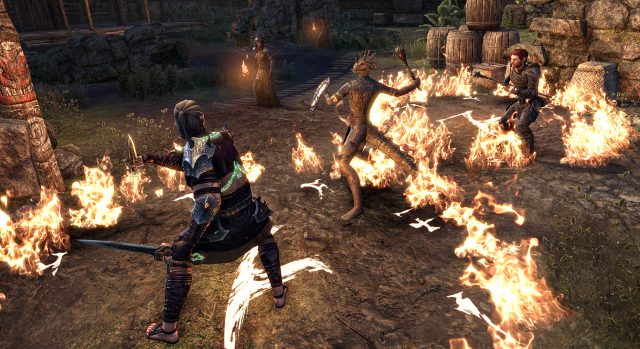 To be honest this is exactly what I’d expected to happen in this kind of content, as you have little control on where they stand or how they react. Their skills depend on where they are slotted on the bar, so you could be getting those heals or you might not, depending on how you build them. Of course this isn’t the final version of Companions, so there could be some changes ahead. I wouldn’t mind Zenimax implementing  some sort of companion bar that allows you to signal them to stay close or stand back. Maybe behaviors to choose how involved they get in a fight, or to simply assist.

The great thing about their skill set, however, is you can swap these in and out as you please. If one setup doesn’t work, you can easily swap out a skill or a weapon type and change things up to find a different tactic that works. Companions can be built in a way to complement your own skill set, acting more as an assist or enhancement. Again this is early on, from what I experienced in-game and depending on balancing things may change.

It’s nice to have a bit of company when questing, even if it is just a Companion. Questing in ESO is very much a solo experience, except for the odd NPC or so that joins in. Having a constant Companion to aid you in theory will also help with levelling and getting things done, and I look forward to seeing how they will be implemented in the big wide world of Tamriel, especially when there are other players all running around with their own. This also opens up doors to what we could expect in future for this feature, additional companion choices would also be welcomed. Will we be able to romance our Companions in future? The options are endless. I’m fully expecting some mis-adventures, though some time may be needed to fully iron out the balance of our new AI friends, but I think it’s a great addition nonetheless. 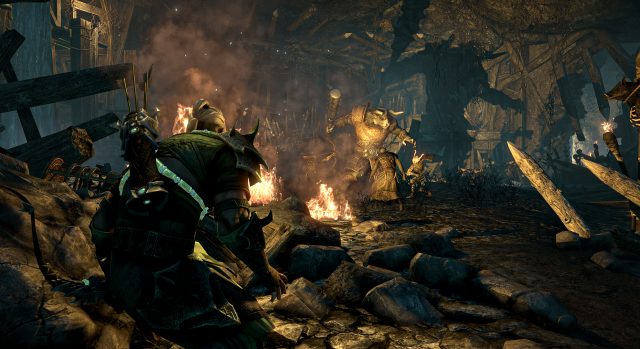 The Elder Scrolls Online Blackwood comes out June 1st for PC, Mac and Stadia, and June 8th for Playstation and Xbox. Be sure to check out the Wiki if you have further questions about it, or about ESO in general.