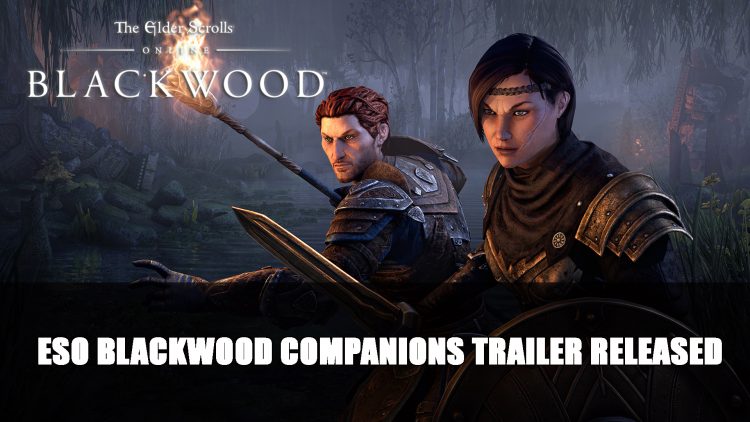 Zenimax have just released a new trailer for the next expansion Elder Scrolls Online Blackwood featuring the biggest addition coming this June, Companions.

The latest trailer for the Elder Scrolls Online Blackwood, the upcoming expansion releasing this June, showcases the new Companions feature. If you haven’t heard, ESO will be getting a major addition with the next chapter, not only diving into the Gates of Oblivion, but players will have their very own side-kick of sorts to accompany them on their adventure.

The new trailer previews the first two companions coming to the game, Bastian and Mirri. This ultimately means you will “never adventure alone” again, well only if you want to. It also shows off some stunning scenes from Blackwood, which concentrates on the schemes of the Daedric Prince Mehrune Dagon, taking place 800 years before the events of The Elder Scrolls IV: Oblivion.

We had a peek at the Companion system not too long ago in our Elder Scrolls Online Blackwood: Hands-On Companions Preview, so if you want a better idea of how these newfound friends will work in the expansion, be sure to check that out.

Companions will not only fight alongside you, but get their own Companion Equipment such as armor and weapons. You can also pick the skills they use, ultimately deciding which role they will play.

Blackwood promises 30 hours of new main storyline, an abundance of side quests, new quality of life features, and a major new feature Companions.

Official features for ESO: Blackwood can be found below:

If you want to kick off your Gates of Oblivion adventure but can’t wait for June, be sure to check out the already released Flames of Ambition DLC, which adds two of the latest dungeons Black Drake Villa and The Cauldron.