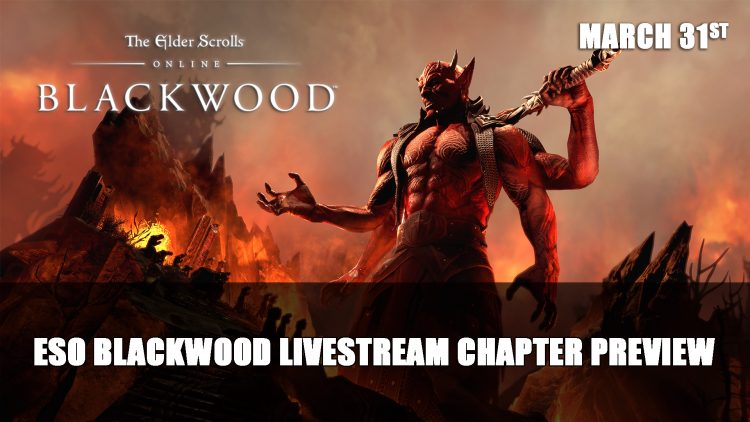 Zenimax have announced the next livestream for the Elder Scrolls Online which will feature the next chapter of the MMORPG called Blackwood.

Live on the Bethesda Twitch channel, the development team will be previewing more about the next Elder Scrolls Online expansion, Blackwood. The next chapter which is part of the year long content Gates of Oblivion will be getting a closer look  during the livestream.

The preview event will take place on Wednesday March 31st at 3PM EDT on the official Bethesda Twitch channel, with a preshow beginning at 1:30PM EDT.

In case you missed it some of the major additions coming to ESO in June is a new zone to explore, new 12-player trial, the addition of Companions, 30 hours of new main storyline content, plus new quality of life features. Blackwood will follow the schemes of the Daedric Prince Mehrune Dagon, and the chapter takes place 800 years before the events of The Elder Scrolls IV: Oblivion. It will be exciting to learn more about the Companions system, as they can fill a number of roles.

Those who tune into the live stream will have a chance to receives drops (don’t forget to link your ESO account to your Twitch account), these include Ouroboros Crown Crates AND the Flame Atronach Pony pet.

Watch the Blackwood Chapter Preview Event on March 31 to discover what adventures lay ahead in our next Chapter and the #GatesOfOblivion year-long adventure.https://t.co/3SPTILgDDN pic.twitter.com/mB0E5aVHrd

Recently Update 29 for ESO went live for all platforms adding the new Champion System plus CP 3600 max., along with the paid DLC Flames of Ambition which adds two news dungeons following the Gates of Oblivious content.

For all the latest content be sure to check out our Elder Scrolls Online wiki. For more news find it here in Atomic Heart Gets ‘Photo Mode’ Trailer Plus Screenshots and Assassin’s Creed Valhalla’s Next DLC Wrath Of Druids Launches April 29th.