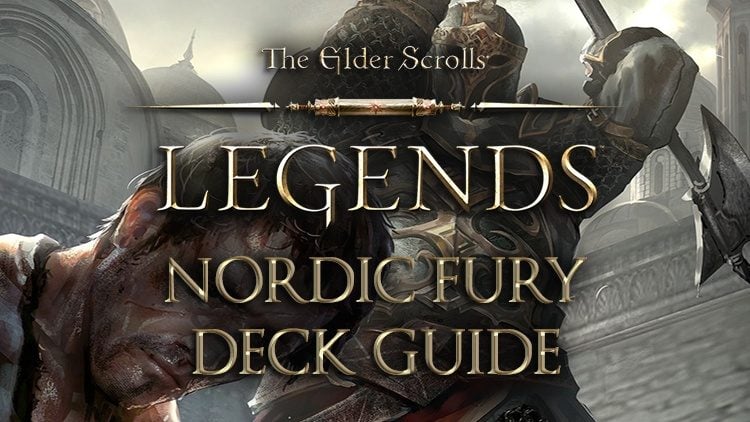 The Elder Scrolls Legends Decks are the bread and butter of the game, and since the release of Heroes of Skyrim on June 29th, they have changed significantly. As an avid fan of Elder Scrolls Legends, having spent well over the amount any sane person would on the game, I’ve decided to do a weekly segment dedicated just to Decks. If you’re a new player to the game or are simply struggling in competitive play, then these guides are for you. This week’s Deck is called Nordic Fury, in honor of July’s card of the month: Ulfric’s Housecarl.

The theme of the Nordic Fury deck is to use mostly Nord, low cost creatures, to overwhelm your opponent. Many Nords have an ability that grants you a bonus when a Rune is broken and with this deck we use that mechanic to our advantage. Put the pressure on your opponent and never let up until he/she bows to your submission. 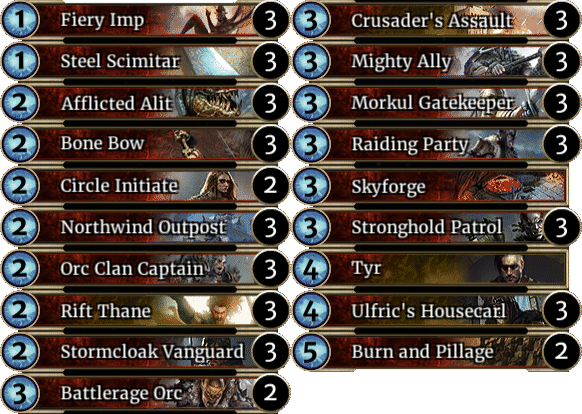 The strategy with this deck is to get out low cost creatures early and to break Runes as quickly as you can. Afflicted Alit is the best 2 Magicka cost card you can get out at the beginning of the game, because he can break a Rune on his first attack, allowing you to buff Circle Initiate on Turn 2 or Turn 3. He is also good at breaking a Rune when you can’t get through a guard, giving you some benefit. Rift Thane is probably second best as he can hit for 4 damage and has Breakthrough, allowing for him to at least put some damage into your opponent.

You want to avoid using your creatures that have Charge until they can be buffed by Northwind Outpost, Skyforge or Orc Clan Captain if you can. These cards are really good at taking your opponent by surprise, and can win you many games. Stormcloak Vanguard even gives you a 5/5 creature for 4 Magicka as a Last Gasp ability, which is great because card draw is VERY important to this deck.

The most important part of this deck is spending ALL your Magicka every turn, and I cannot stress that enough. Do the math, figure out where you will be next turn, and plan accordingly. Crusader decks have razor thin margin of error against the meta Scout decks out there, and utilizing all your available Magicka will help you keep the pressure on.

We have very few expensive cards in this deck because you MUST keep two creatures on the board at the end of your turn every turn. Decks that are heavy on removal will destroy you if you can’t keep putting out many creatures. Force them to make tough decisions and keep them on the back foot. If they have to react to you they can’t play what how want to play, and will have to play out of their comfort zone.

Lastly, against Scout decks, you will have about a 50/50 win percentage depending on how you draw and they draw. Don’t let them gain health, try not to worry if you run out of steam just before they die. Hold your cards in your hand and try to wait for an opportunity where you can play 1 or 2 charge creatures and buff them with your Items and finish off your opponent when he/she thinks they have won. It’s tough trying to gauge what to do in this scenario, so learn from your mistakes and pay attention.

We’ll start with the most important card to this deck: Northwind Outpost. 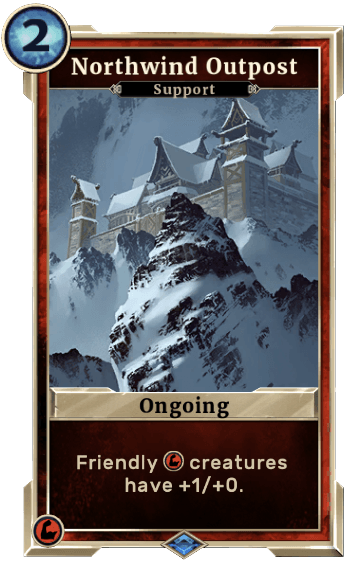 Northwind Outpost takes your modestly damage dealing creatures and turns them all into deadly killing machines and at 2 Magicka you can get this out turn 1 or turn 2 . Always put your creature(s) out the turn before and place this on the turn they are due to attack if you can. The exception being if you only have creatures with Charge in your hand. If you have 1 or 2 of these in play your Raiding Party can often finish the last 5~ health from your opponent. 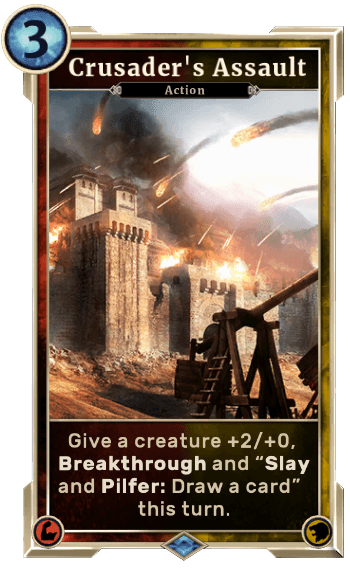 Crusader’s Assault is a life saver and will grant you the sustaining power you need to keep going with card draw. Use this card to kill off a guard and try to make sure you do at least one more damage than the creature (Pilfer) so you get 2 cards instead of one. Hang onto these until you need them to get the best effect. 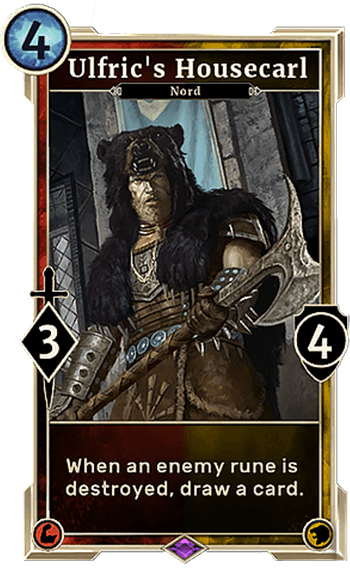 Ulfric’s Housecarl was just introduced as the card of the month for July, which helps give this deck some much needed card draw. Try to get this guy into play as soon as you can if possible, just be sure that you have at least one other creature on the board by the end of your turn, otherwise try to play a couple lower costing creatures to keep the pressure on your opponent.

These cards are not as important as the “Must Haves” but they are still vital to the deck. Let’s take a look at the first three, which are: Orc Clan Captain, Rift Thane and Mighty Ally. 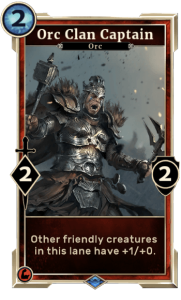 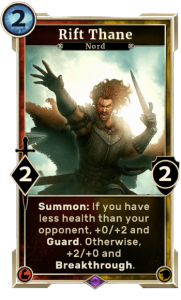 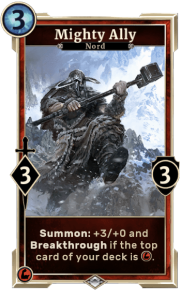 Orc Clan Captain gives the same effect as Northwind Outpost, but he’s not a support and he can be silence or killed. Always place this guy the turn after you place another creature so that the creature is buffed when attacking. This card combined with Northwind Outpost can overwhelm your opponent quickly.

Rift Thane is a 4/2 with breakthrough for 2 Magicka which means unless you are playing an Intelligence deck, you are guaranteed to get damage on your opponent. He can also gain Guard if you are behind, which can happen against Sorcerer decks sometimes. Buff him with Crusader’s Assault for best results.

Mightly Ally is hands down the best card for pure damage in the deck. Decks with low amount of creature removal will hate this guy and those with high removal will find them using 4 or 5 Magicka to remove a 3 Magicka cost creature, which helps put you further ahead. 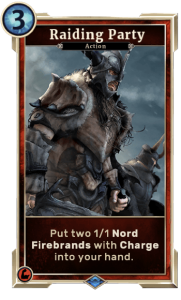 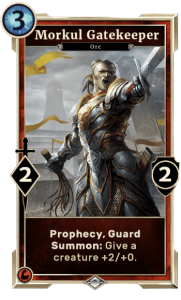 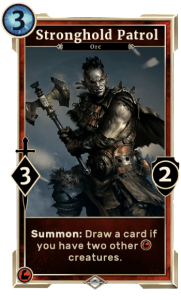 Raiding Party gives you two zero cost 1/1 Nords with Charge which at first glance seems like a bum deal considering they cost 0 Magicka normally. However you get 6 creatures in the cards instead of 3, and card space in the deck is a premium as there really ins’t much flexibility. Use these to surprise opponents and take out key targets in the other lane or finish off an opponent.

Morkul Gatekeeper is one of very few defenders in the deck, which you will most certainly need. On top of that he can buff an attacking creature or himself and…he has Prophecy, which is just and added bonus. Drop him in before you attack and get the most from him.

Stonghold Patrol is an odd card and I had to force myself to put this in, since 3 Magicka for a 3/2 that may or may not get the card draw seemed like a big gamble. However, I have yet to have a scenario when I didn’t get the card draw from it, since the deck just puts too much pressure on. Use your Raiding Party if necessary later in the game to ensure you get it the bonus.

Don’t be discouraged if you lose a few games with this deck because Scout meta decks are hard to play against, and as I mentioned earlier, you will generally only win about half of these games. Every game will be competitive though and you will have a fighting chance.

Sometimes you just get horrible draws. This is nothing new to ESL, and it happens less frequently with this deck because the cost for cards is really low, but it does happen. You really need your Cruader’s Assault, Ulfric’s Housecarl or Stronghold Patrol or you can run out of steam quickly and sometimes you just don’t get them. Don’t give up, recognize it for what it is, and just keep going.

When you play against other aggressive decks you’ll have to play smart and often you won’t just be able to out damage them. Sometimes they have health gain cards and you must deal with them or you will lose. Learn from your mistakes with these decks and improve until you know how to handle the specific cards of each deck.

Consider adding cards like Rapid Shot, Protector of the Innocent, Plunder, Stormcloak Camp, Riften Pillager, Withered Hand Cultist or Piercing Javelin. Rapid Shot can get you some extra card draw and is excellent against Sorcerer decks with Wards. Protector of the Innocent can help against other aggro decks and has Prophecy. Riften Pillager can become a 4/5 or 5/6 for 3 Magicka which is a bargain, but if you draw them early they might slow your pressure. Withered Hand Cultist is good against Sorcerers and Battlemages and Piercing Javelin is needed removal sometimes and it can be pulled with Prophecy.