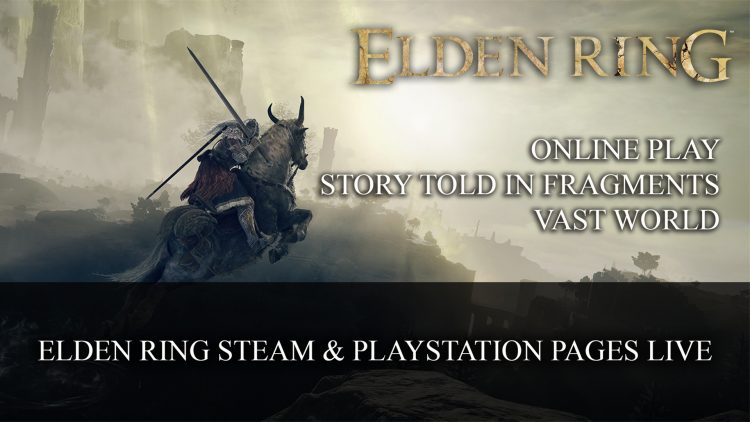 The Elden Ring page is now live on platforms Steam and the Playstation with some new details and screenshots.

Elden Ring now has a page on both platforms Steam and Playstation Store. While you can’t actually pre-order from these listings you can read about the key features, details and view screenshots of the game. It also now includes the gameplay trailer which was revealed a couple of months ago. There are also new descriptions of Elden Ring on the Steam page.

The Steam page and Playstation Store covers features of the game the open world, character customisation and online play. It explains how each of these will function in the upcoming FromSoftware Action-RPG. Information about online play which shares players can travel seamlessly through the world of Elden Ring together. You can also add the games to your wishlist on both platforms.

As for the lore, it’s described as an “Epic Drama born from a Myth” being told in “fragments”.

THE NEW FANTASY ACTION RPG.
Rise, Tarnished, and be guided by grace to brandish the power of the Elden Ring and become an Elden Lord in the Lands Between.

While there isn’t a whole lot of new information, it does solidify the core concepts of the game. Previously new sections of Lore about the Tarnished and the Lands Between were shared on the official Bandai Namco website, which also added tidbits about gameplay mechanics and Stealth.

In case you missed it don’t forget to watch our Elden Ring Gameplay Impressions video which goes what to expect, graphics, online, network test, combat, multiplayer and more.

If you want more Elden Ring be sure to check out our Elden Ring wiki which covers Lore, Skills as well as the latest Elden Ring info.

For all the details, gameplay trailer and details announced for Elden Ring at Summer Game Fest 2021 be sure to read/watch next Elden Ring Gameplay, Release Date, Screenshots Revealed At Summer Games Fest 2021. Want to see our reaction? Check out this priceless clip of when Elden Ring was revealed during our Twitch stream. If that’s not enough you can check out our Elden Ring Gameplay Impressions right here. You can also find out about Elden Ring Pre-Order Editions here.