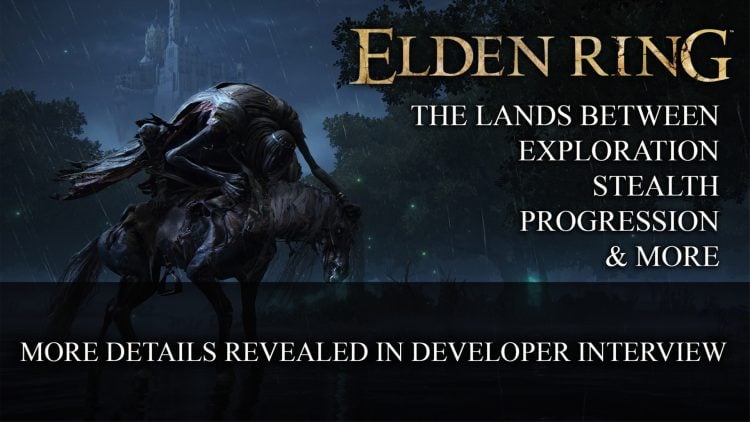 In an interview Hidetaka Miyazaki and IGN, the director revealed some details about the upcoming fantasy RPG game Elden Ring. This included providing details on lore, G.R.R Martin’s involvement, in-game systems, open-world and more. The title finally got its reveal at Summer Game Fest 2021, unveiling a new trailer previewing some of the gameplay. 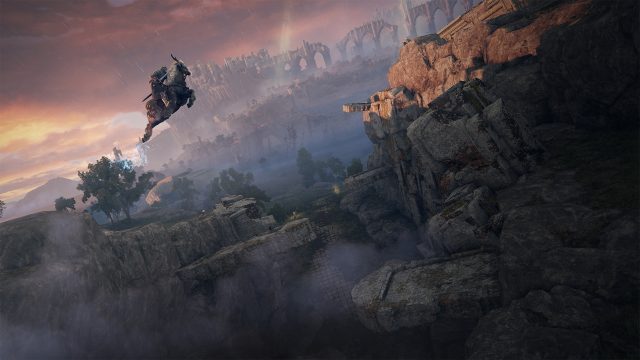 Miyazaki also touched upon adding “new action systems and game systems” which complement the open-world concept. Players will be able to ride upon horseback, giving a new way to explore and players will also be able to jump. There are also a number of new additions for combat, that will “raise the level of freedom” when compared to previous FromSoftware games. From the sounds of the description, the scale of the world is rather large.

Combat also has quite the choice, such as being able to “summon the spirits of deceased enemies and use them as allies in battles”. Choices like these help open up the way players will tackle combat with a “high level of freedom”.

One of the biggest draws for this new FromSoftware game is the collaboration between not just a great developer but a well-known author who will add to the fantasy world.

Described as a dark fantasy IP, Miyazaki explained that The Lands Between is a vast world, and bringing in author George R.R. Martin was integral to the “rich storytelling” as well as adding “that sense of character and drama”. 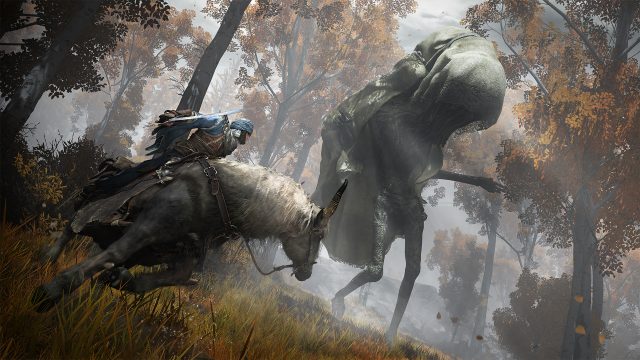 When asked about The Lands Between and the reason behind the name and the setting, Miyazaki explained it was George R.R Martin himself who created the name:

We’re happy you picked up on that because The Lands Between is actually a name that was invented by George R.R. Martin himself, when he was coming up with the impetus for this world and writing its history and its deep mythos. So we wanted to implement that into the game.

He went on to explain that the idea behind the name The Lands Between is supposed to create a sense of intrigue, “an invitation to this mysterious new land”. There is also a theme of exile and return, mixed in with an “ethereal” experience.

The Tarnished will soon return. Guided by grace once lost.

The latest trailer for Elden Ring revealed more about the game not only gameplay-wise but mentions the “Tarnished” when asked about the player-character and how is it is related to being “shattered” Miyazaki explained what the significance is behind this idea. The Lands Between are in the presence of the Elden Ring and the Erdtree, which is a blessing to the people. Those granted with this blessing have a “golden aura”. The Tarnished refer to those who have lost “grace” and have had the “light faded from their eyes”. The time frame seems to span over quite a long period of time as this refers to ancestors of characters that were banished from The Lands Between, ending up Tarnished.

This is an important theme in Elden Ring, and how not only players but characters treat being able to return to the land, gaining “this new-found grace”.

When asked about a running theme or inspiration behind enemies and bosses, Miyazaki talked about one main theme for main bosses of the game. It was G.R.R. Martin who developed characters and demigods who inherit power, tainted power that are shards of the once shattered Elden Ring. 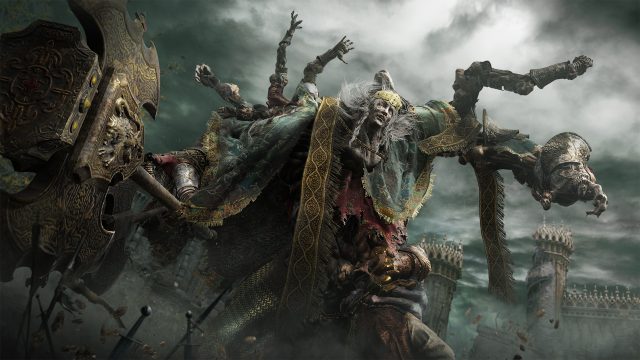 We wanted to depict these beings as not just creatures and horrible monsters, but have an element of heroism and an element of mythology to them. Essentially, they are the old gods of this world.

As for whether you will find any Dark Souls styled Mimics in  Elden Ring, according to the developer you won’t find something in the exact same form, but there are some “surprises” to be experienced.

There will be six large areas of Elden Ring, each different domain of the major demigod characters. Players have free reign on which areas they want to tackle first, without a specific order. This gives way to a “free level of progression” allowing players to explore The Lands Between in different ways. While you won’t be able to access everything at the start, there are still many ways to approach the area. That’s pretty awesome that you get to have the freedom to explore as you like, with each area having its own demigod influence, the main focus being a number of ways to progress.

While the game seems to be getting some new additions to combat and exploration one thing that will still be part of this FromSoftware game is a hub area. While not accessible at the start of the game, later on players can access six main areas through the mainline dungeon map, plus access to a number of “catacombs, castles, and fortresses”.

Fast travel will be part of Elden Ring, while you can explore freely upon horseback, Miyazaki assures that you can use fast travel as wanted the developer wanted to provide a “level of combat and ease of play”.

As Elden Ring is on a larger sense of scale with a vast map, the goal for FromSoftware when it came to progression is “reward no matter which direction the player took”. This means providing customisation and craft items that can be obtained from material found in the world.

The main focus for this game is “retention”, allowing players a sense of progression, the flow of exploration as they journey through the map. To explain retention Miyazaki gives the example of their past game Sekiro, where the Resurrection mechanic allowed players to continue progressing without affecting the flow. So while Sekiro had this mechanic, Elden Ring will have its own form of this, but it will not be a resurrect mechanic. 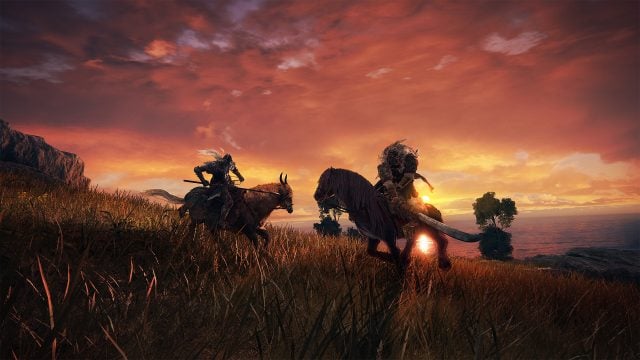 A big part of the previous titles such as Souls and Bloodborne was the stamina, Elden Ring will have a stamina bar but the overall influence. According to the developer they wanted to make it “feel less restrictive and contribute to that level of freedom” when compared to previous titles.

The same goes for customisation, the emphasis on player choice when it comes to builds seems to be quite wide. Players can choose Skills that can be freely interchanged between a large variety of Weapons with “around a hundred skills in total”.

You’re free to build your character with different weapons and equipment. You’re free to learn magic as well. So if you throw all of these things in, we think the build customization is going to be even richer and even more varied than before

One major addition to this Action-RPG will be Stealth, with a number of uses in the game. Players can crouch, sneak and be less easily detected in long grass for example. You can sneak up to backstab, or stealth attack enemies. Another use of Stealth will be to “bypass certain areas”. 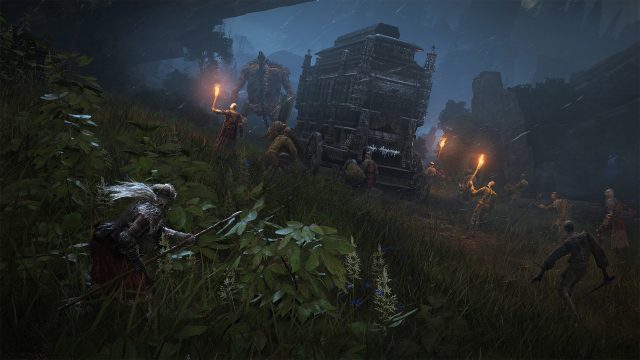 For all the details, gameplay trailer and details announced for Elden Ring at Summer Game Fest 2021 be sure to read/watch next Elden Ring Gameplay,Release Date, Screenshots Revealed At Summer Games Fest 2021. Want to see our reaction? Check out this priceless clip of when Elden Ring was revealed during our Twitch stream. If that’s not enough you can check out our Elden Ring Gameplay Impressions right here. You can also find out about Elden Ring Pre-Order Editions here.