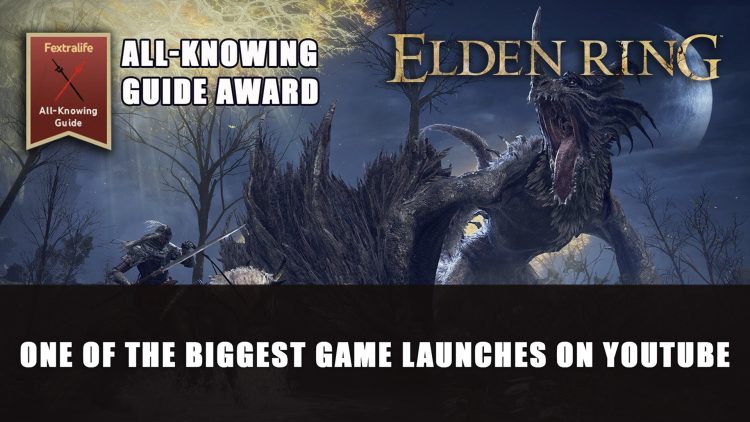 Youtube has revealed that Elden Ring had one of the biggest launches on the platform accumulating a massive 3.4 billion views. Fextralife also gained an Elden Lord Award.

Elden Ring had a major launch, but Youtube has revealed just how big it was. On the video platform alone it gained 3.4 billion video views in just 60 days. Putting that in comparison to other major game launches, they don’t even come close.

In a visual breakdown, Youtube shared that the next runner-up launches were GTA V which gained 1.9 billion in views, followed by Red Dead Redemption 2 with 1.4 billion. Others on the list include Super Mario Odyssey in fourth place with 828 million, Zelda: Breath of the Wild with 638 million and Skyrim with 456 mil.

Gather ‘round Tarnished! Let’s look at the breakdown of how Elden Ring garnered 3.4 billion video views in 60 days, making it one of the biggest launches ever on YouTube ⚔️ pic.twitter.com/252qjZsmOv

Other interesting stats revealed were which bosses were the most popular (or maybe the most aggravating depending on how you look at it) when it came to videos. The top-heavy hitter according to Youtube’s post is none other than Margit, The Fell Omen. This was followed by Malenia Blade of Miquella, Godrick the Grafted, Starscourge Radahn, and the Draconic Tree Sentinel.

As for character classes the Samurai was the most sought after video, followed by Hero, Wretch, Astrologer and lastly Warrior. Need a class guide for the mighty Samurai? Check it out below:

Youtube was also kind enough to award Fextralife with the “All-Knowing Guide” award as we provided a number of videos going over bosses, builds, weapons and more. If you have yet to take a gander at our Elden Ring review, which covers the game with no spoilers after 100+ hours of gameplay check it out below:

Elden Ring has been quite the wild Torrent ride with its launch and we’ve had many tarnished using our Elden Ring wiki as they ventured into the Lands Between.

We gave @Fextralife the title of All Knowing Guide as they’re always providing the tips & tricks needed to progress in playthroughs 🎮 https://t.co/aE8aszVkgP

Do you have a favourite Elden Ring memory? Which boss did you look up on Youtube? Let us know in the comments below.