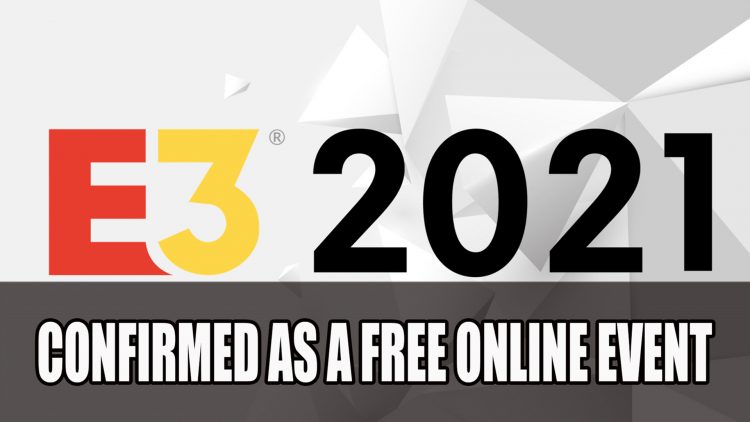 Organisers the Entertainment Software Association (ESA) have confirmed that E3 2021 will be a free online-only event.

E3 2021 Confirmed to be a Free Online-Only Event

E3 2021 will be taking place this year but in a new all-digital format, which has been confirmed for the Entertainment Software Association (ESA). You will be able to watch the showcase online for free in the comfort of your own home.

E3 2021 will be taking place between the 12th to 15th June, being a “reimagine, all-virtual” event for developers to feature their latest games and announcements. According to ESA, they will be “working with media partners globally to help amplify and make this content available to everyone for free”.

WELCOME BACK! It’s been hard waiting quietly as we got ready for today, but we are thrilled to officially announce our plans for June 12th-15th!

Sign up for updates below & get hyped for the return of the most exciting show in video gaming: #E32021https://t.co/QOa74rVCXB

CEO Stanley Pierre-Louis, the ESA president shared that E3 will be “a more inclusive event” providing fans with “major reveals and insider opportunities”.

So far the show has participants such as Nintendo, Xbox, Capcom, Konami, Ubisoft, Take-Two, Warner Bros. Games and Koch Media as part of the lineup. But there is the promise of “more to come” according to the ESA. Sony has already confirmed they won’t be a part of the show this year.

You might be wondering why the emphasis on a free event, well a recent report had claimed ESA had pitched the idea of putting some content behind a paywall (according to VGC). This doesn’t look like it’s going ahead, with many in the online gaming community not thrilled with the idea, but ESA have firmly stated that “no elements” of E3 will be paywalled.

E3’s 2021 digital show is a free event for all attendees. We’re excited to fill you in on all the real news for the event very soon. https://t.co/HzTzaQEosx

The last E3 was postponed and then inevitably cancelled due to the pandemic, but it looks like the new online format is full steam ahead. Hopefully we have some exciting news from developers, maybe a glimpse of a certain now eagerly awaited FromSoftware title? Elden Ring has yet to gain another trailer or further info for that matter since it’s revealed at E3 2019, which feels so long ago now. At this point a screenshot may even suffice for fans who are waiting with bated breath for something more. If you’re eager to learn more check out our Everything We Know About Elden Ring: Release Date, Action RPG, Souls-Like, Open World.

For more news find it here in Bioware Makes Major Changes For Mass Effect Legendary Edition Including The Mako’s Instant Deaths and Diablo 2: Resurrected Tech Alpha Announced For This Weekend.