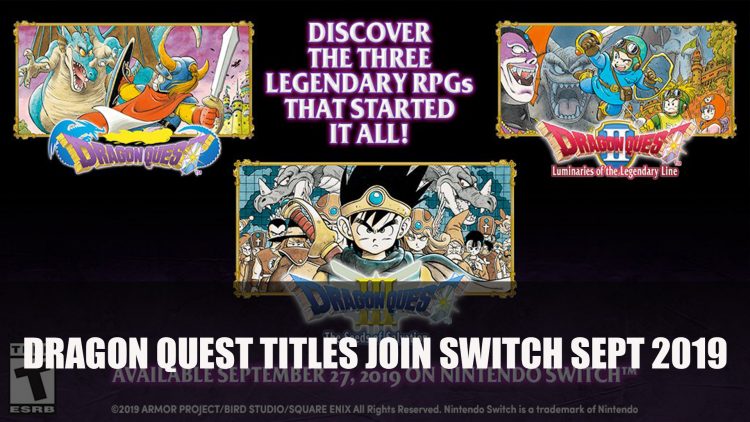 Dragon Quest I, II and III Coming to Switch on September 27th

The official Dragon Quest Twitter account has announced that the first three titles will be coming to North America and for the first time in Europe for console. The Switch version of Dragon Quest, Dragon Quest II: Luminaries of the Legendary Line and Dragon Quest  III: The Seeds of Salvation will be joining the eShop on September 27th, priced at $4.99, $6.49 and $12.49 accordingly.

Those who wish to get their hands on the physical collection of these titles can by pre-ordering from Play-Asia for $39.99 and will be releasing in October.

The Dragon Quest series released in 1986, and quickly gained traction resulting in growing fanbase of millions worldwide. The titles follow the RPG genre and will now be part of a modern collection, but will still feature the simple controls to best mimic the original gameplay.

Find out where it all began – the first three #DragonQuest games are coming to North America, and for the first time on console in Europe, on #NintendoSwitch!

You can start with any of the three games, so get ready for classic adventures from September 27th. pic.twitter.com/iPklL1k0uv

Dragon Quest I, II and III will be releasing on the Nintendo Switch on September 27th 2019.

For more news be sure to read next Monster Hunter World Iceborne Update Roadmap Announced and Nioh 2 Open Beta Starts In November. You can also get a round up of recent RPG news in Top RPG News September 15th (Nioh 2, MHW Iceborne, FF7 And More!).