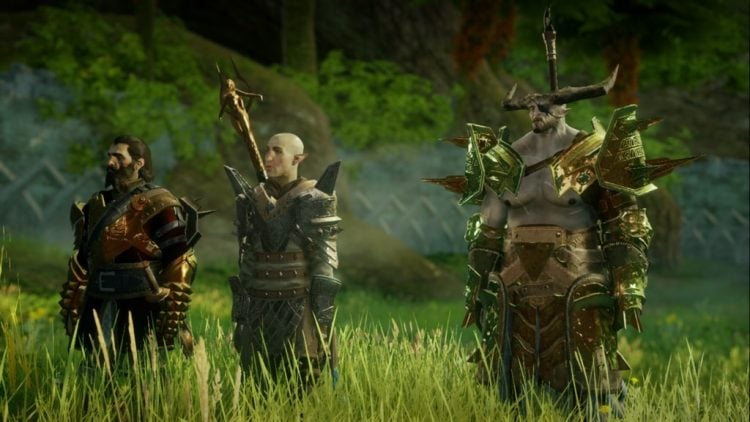 In this article, I’ll take a look at a scene in Dragon Age Inquisition, where Solas and Iron Bull play chess. Did Solas reveal his master plan during the game? Let’s take a look.

Four years ago, Bioware released this highly entertaining game, Dragon Age Inquisition. It was the third instalment in the Dragon Age series. It was an Award winning game, praised for its stunning graphics, epic story and immense character development. More importantly for this article, it was praised for its clever plot twists. Some of these plot twists were revealed after one playthrough, and some were well obscured behind certain conditions that needed to be met first.

In this article, I want to share one of the most clever ones. I only discovered it very recently, although I have been replaying this game over and over through the last few years. So, come with me and be ready for some spoilers, minor and major, and for lots of information about chess.

How to unlock the chess game in Dragon Age Inquisition?

It starts from the quest of another companion, Iron Bull loyalty mission to be specified. You remember the collection of rogues, mercenaries, and misfits under his command? The Chargers, the small band he formed to cover his true identity as a Qunari spy, then joined the Inquisition with them.

Iron Bull personal quest is all about being cornered and forced into making a very tough choice. He either keep his true identity and stay loyal to his people, by leaving the Chargers for their death, to rescue the Dreadnoughts from Tevinter mages. Or take the tougher choicer and protect his friends, the ones loyal to him, whom fought alongside him for a decade.

The choice have a big role in the story, and the sort of support and war table missions the Inquisitor gets, but also a direct effect on Iron Bull, and his ultimate fate in the Trespasser DLC.

That all we know, but as it was designed in a clever way, it turns out this decision have another subtle effect that you don’t see until you keep taking Iron Bull and Solas with you in party, many times with you after Saving the Chargers.

The scene as presented in party banter

Solas: How do you feel, Iron Bull? Do you need a distraction to focus your mind?

Sooooo, out of the blue, Solas starts a mind game of chess with Iron Bull, without even a board. A challenge, for a Qunari who can’t back down from a challenge.

And so it begins. I’ll put videos of all 6 parts as presented in conversation in game, so you guys get the feel of it. Then I’ll put a final video showing  the game on a proper chess board, followed by comments on the actual meaning behind this game for the story of Dragon Age Inquisition.

And part one ends with Bull accepting King’s gambit, a pretty standard opening for many professionals. Then they continue in a second banter after Bull draw the board and pieces in his mind.

Now they introduce different names for their pieces, according to each culture. Bishops are mages for elven, while they are tamassrans for the Qunari. Knights stays Knights for Solas, but they are Ben-hassrath for the Qunari. And the Queen is an Arishok (Who would have guessed?!)

If I may go further, I’d say this part shows how careless Solas is ready to be in this game, while Bull is more reserved and calculating. Or are they?

Bull keep hammering Solas‘ pawns, and pieces, Solas seems trying to survive, losing bit by bit. Bull taunts him, calling him Fade Walker, and hinting he lost his touch due to too much time “playing with spirits”.

Now Solas Taking his turn to move up the board, laying siege around the Arishok, the spearhead of Bull strategy, and almost getting it. Bull frustrated, but still play his pieces well and pull out almost safely. Solas have to “consider”

And it comes to this, one opening in the back line (which grew thin by all these moving high up the board), and Bull finds his way into the heart of Solas’ lines. He smashes all his pieces rapidly. Solas doesn’t even try to defend. He just runs – moving his king while pieces around it fall. His voice never lose confidence though.

And, did you get what just happened?

Solas throws even more pieces to the offensive. He loses everything, but somehow sneaks a mage forward and covers him with a pawn to finish the game. Which sounds like an incredible comeback.

Watch it on a proper chess board to see what exactly happened in this whole clever game. Will you get the metaphors behind it?

Wasn’t seeing that refreshing? The whole situation that was going one way, then turned into another one? Or was Solas…

…the dread wolf, the mastermind behind it all?

Putting the chess board to one side for a moment. The real conflict was not even played on a board. The true game was played on a Thedas-wide scale, and Solas was in control of every move. Look at it this way:

Last thing worth mentioning is that Bioware didn’t pull this game out of blue. It’s a famous real chess game actually, called the immortal game, and they adapted it nicely to the story.

So, did you like this chess game scene in Dragon Age Inquisition? Do you agree with interpretations in this article? Or do you have different opinion? Please let us know in the comments below.

If you liked this article, you may also like to read the Dragon Age 3: Inquisition Trophy Guide. You could also read BioWare’s General Manager addresses Dragon Age 4 Concerns.

Arab hardcore PC gamer, I'm from Egypt, and I've been gaming on PC and writing since 2003. I do Fan fiction, forums Role Playing, and guides for games. I joined Fextralife by Jan 2018, to share my views and ideas on the hobbit we all enjoy and love, Gaming. Favorite genres: RPG, ARPG, Third Person, Isometric, Hack&Slash, and Adventure. Occasionally I'd dip in MMOs, Simulation, or Strategy.

6 comments on “Dragon Age Inquisition theory: When Solas revealed his plan in a chess game!”