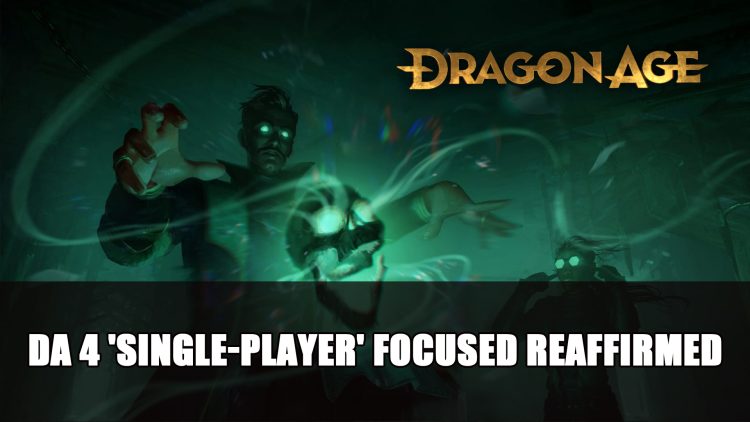 Over the weekend was Dragon Age Day where developer Bioware celebrated the franchise and shared more information about Dragon Age 4, including reaffirming that the title will be a “single-player” game.

The latest posts from Bioware to celebrate Dragon Age Day which took place on December 4th, shared new snippets of new information for Dragon Age 4. This included two short stories that featured the Grey Wardens and one about necromancers. There was also a note about Dragon Age 4.

The message explained that the developer was “still hard at work on building the next single-player focused experience for Dragon Age. We’re excited for next year when we can talk more about what we’re working on.”

The mention of “single-player” means the next Dragon Age will be concentrating on a single-player experience which goes against the previous reports dating back to 2019, where chief financial officer Blake Jorgensen had mentioned “double down on live services”. Another title that had focused on live services was Anthem which ended up not being successful as originally hoped, and eventually shut down. The single-player title Star Wars Jedi: Fallen Order however saw much more success which looks to have swayed EA away from the multiplayer side to Dragon Age 4, or at least with the main focus.

Recently the senior creative director of Dragon Age 4 Matt Goldman, was reported to have left Bioware with no replacement announced.

While it looks like we won’t be hearing more about Dragon Age this year, you can check out the latest short story:

“We made it too,” Antoine offered. He picked up a stone and fidgeted it between his fingers. The elf never could stay still.

For a rundown of recent RPG news find it here in Top RPG News Of The Week: December 5th (The Game Awards 2021, Starfield, Kingdoms Of Amalur And More!)