So Divinity: Original Sin 2  is mighty fine game.   What to do, however, once your done with the campaign?  Well, how about run your own game for a group of friends?  Enter the GM mode, which enables you to do precisely that!

So let us start off with what GM mode is and isn’t.  GM stands for Game Master, and the GM mode is for when you want a highly curated adventure, much like a tradition tabletop game.  GM mode is not  for solo adventures, and in fact the Game Master is not even optional.  Only a GM can launch a GM mode game, therefore one will always  be present. 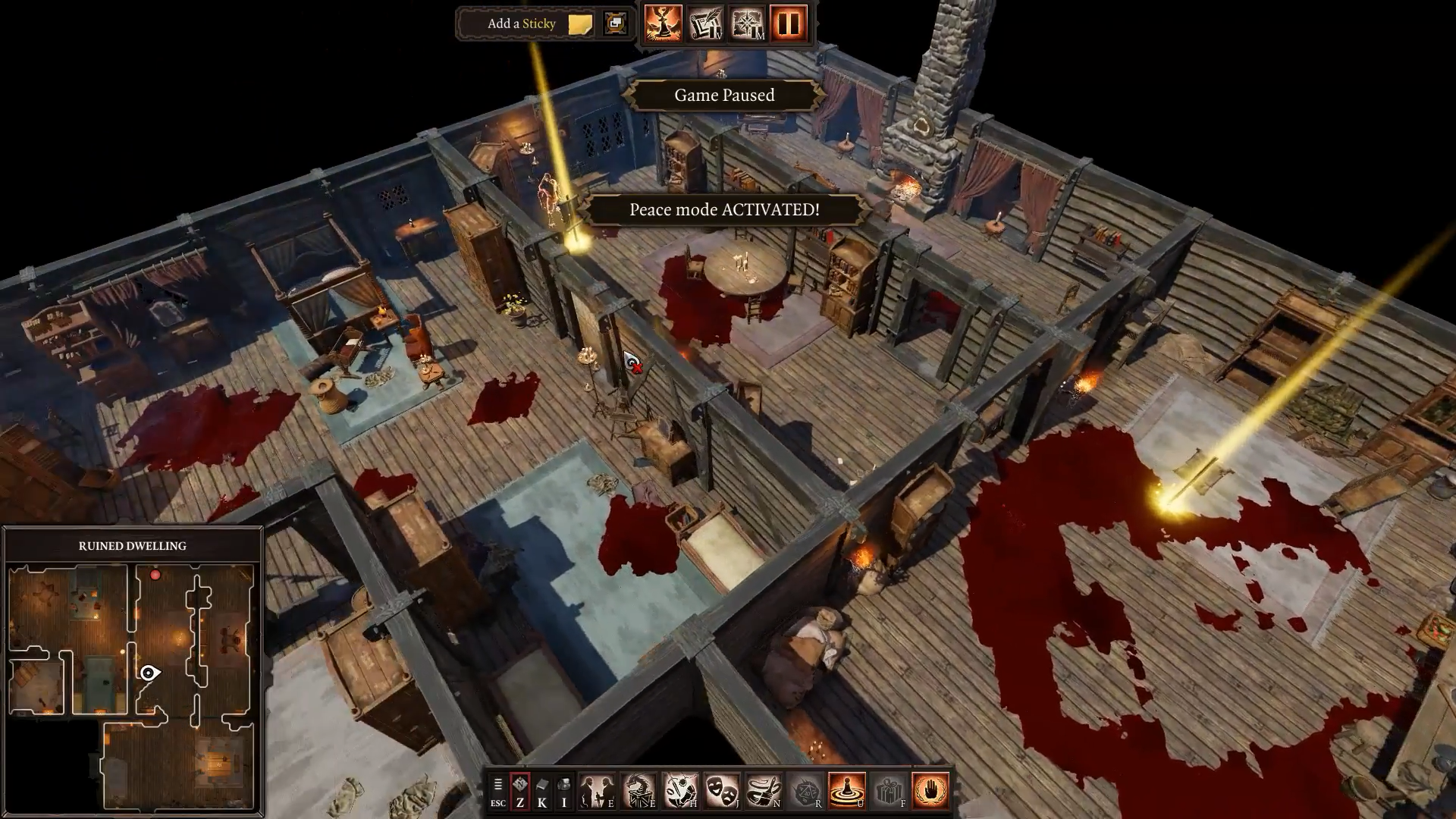 Kinda wanted broken furniture for this ruined house level, but I guess I can settle for scattering blood everywhere.

See, there’s a second part to the puzzle that the game doesn’t make obvious to you – The Divinity 2 Engine (hence forth referred to as Editor).  While you don’t have to use the Editor, not doing so will  saddle you with the aforementioned restrictions.  You want a new, well, anything?  Crack open the Editor and get to exporting.  Now this isn’t a bad setup to have.  Use the GM Mode for running games, and use the Editor to create custom content.  The problem is documentation, as in there is none on this process.  Not that I can find at least.

Now I want to make one thing clear:  I love this GM Mode/Editor combination they have, and with continued updates and few quality of life improvements, this editor has the chance to be known as one of the greats.  However, I have no forgiveness for the state of the documentation.  As I said there basically is none.  Even worse for the GM Mode, there is nothing in the game itself that even hints  at the existence of the Editor. This has led to forum post after forum post of would-be GMs not understanding why they can’t do X, or why feature Z isn’t there.  The answer to these questions is usually: “Go into the Editor and export it.” 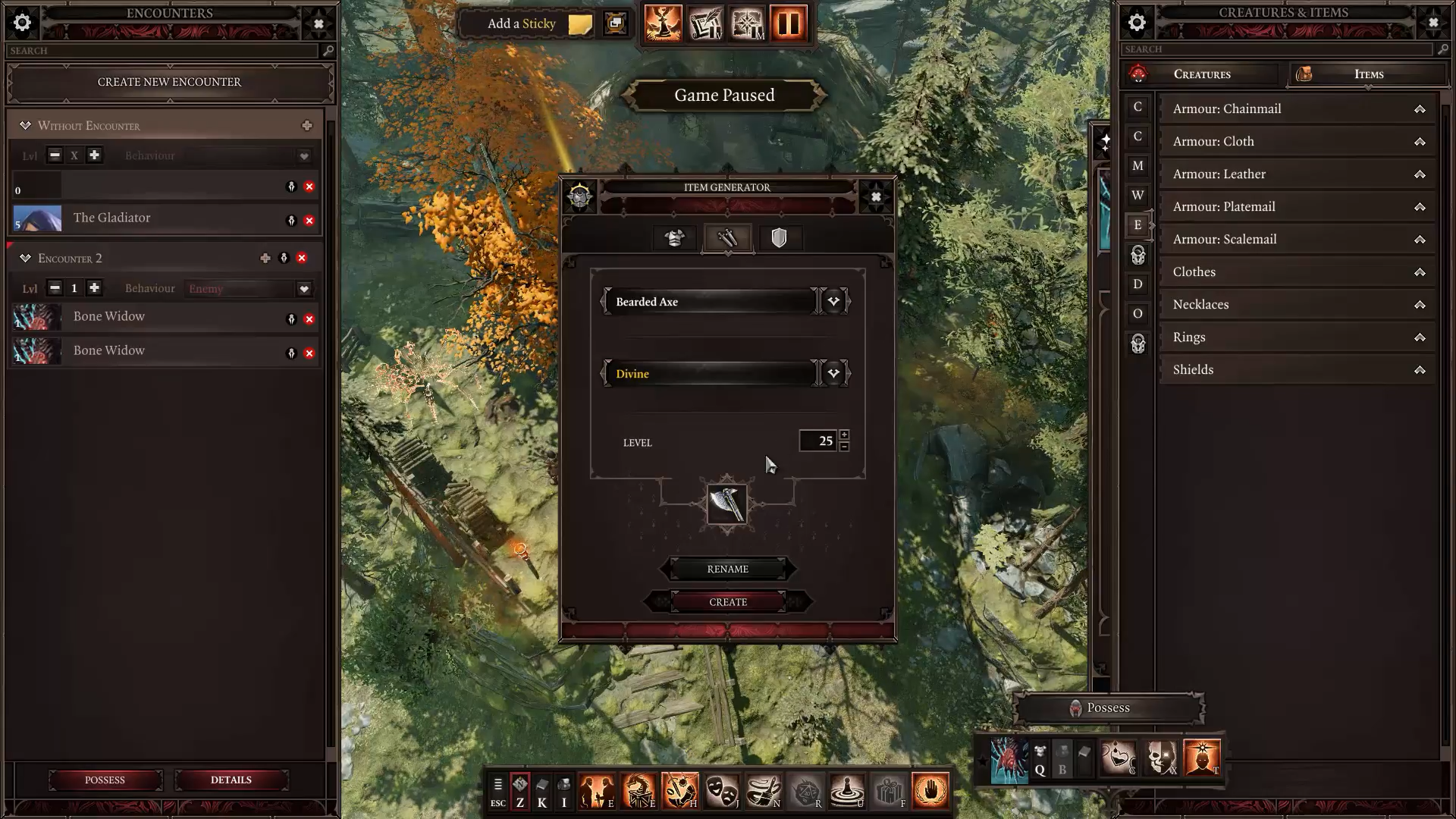 You can create a pretty sweet axe though.

Now enough of that negativity, what can we do with this thing? Quite a lot it turns out, as long as the GM and the players understand the key point of “the GM mode is for when you want a highly curated adventure, much like a traditional tabletop game.”  Really can’t stress that enough.  With that, there are three main modes the GM can be in: Overview Map, Vignette, and Game Field.

The Overview Map mode is the simplest of the modes.  All you do in this mode is setup the over-world maps you’ll show to players to give them an idea of where they are.  This is also where you place pins on the map to indicate to players where they can go.  They give a small but decent selection of maps to choose from, but you can import in any image off your machine.  So if you happen to have Campaign Cartographer or another similar map creation package, you can easily expand your options. 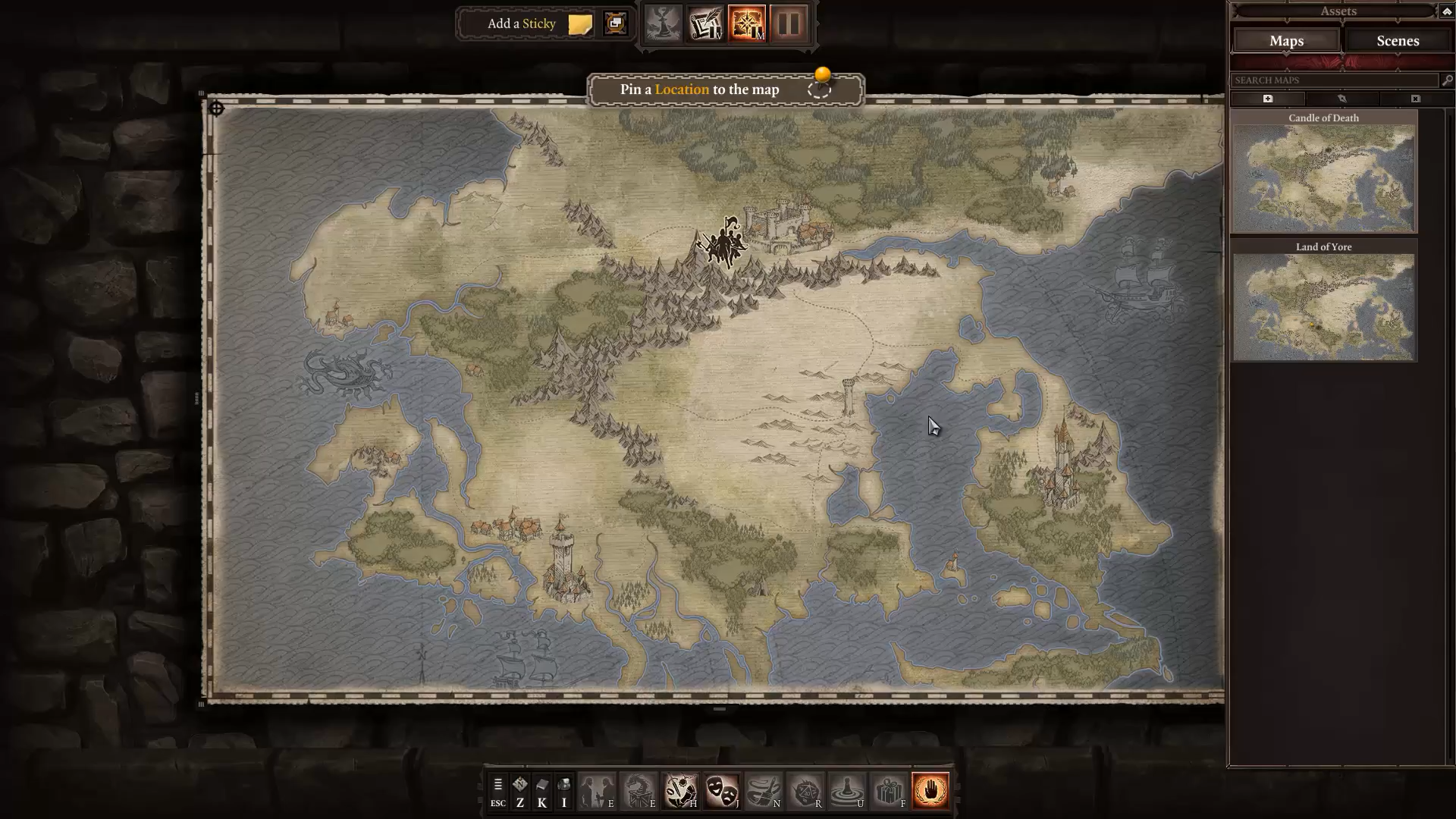 A word of caution for would-be GMs – The first map in your list is the map that will be shown as the thumbnail  for the campaign.  This is all well and good except for one thing, hidden pins.  See, you can hide the existence of pins from players.  Perhaps they need to find a map first, or talk to an NPC before they can figure out the location.  The system works well, except  for the thumbnail, which shows all pins, regardless of hidden status.  Easy fix, just make sure the first ‘map’ is a cover image of sorts, but still a minor annoyance.

Vignettes are a bit more involved.  These are designed for GMs to be able to give a little bit of exposition,  and possibly allow the party to make a choice.  When designing these you choose an image (which again can be imported from any image on your hard drive)  and then can add in as much text as you like.  You also have the ability to create choices for the players.  As the players select their choice, you’ll see their portraits appear by that choice. 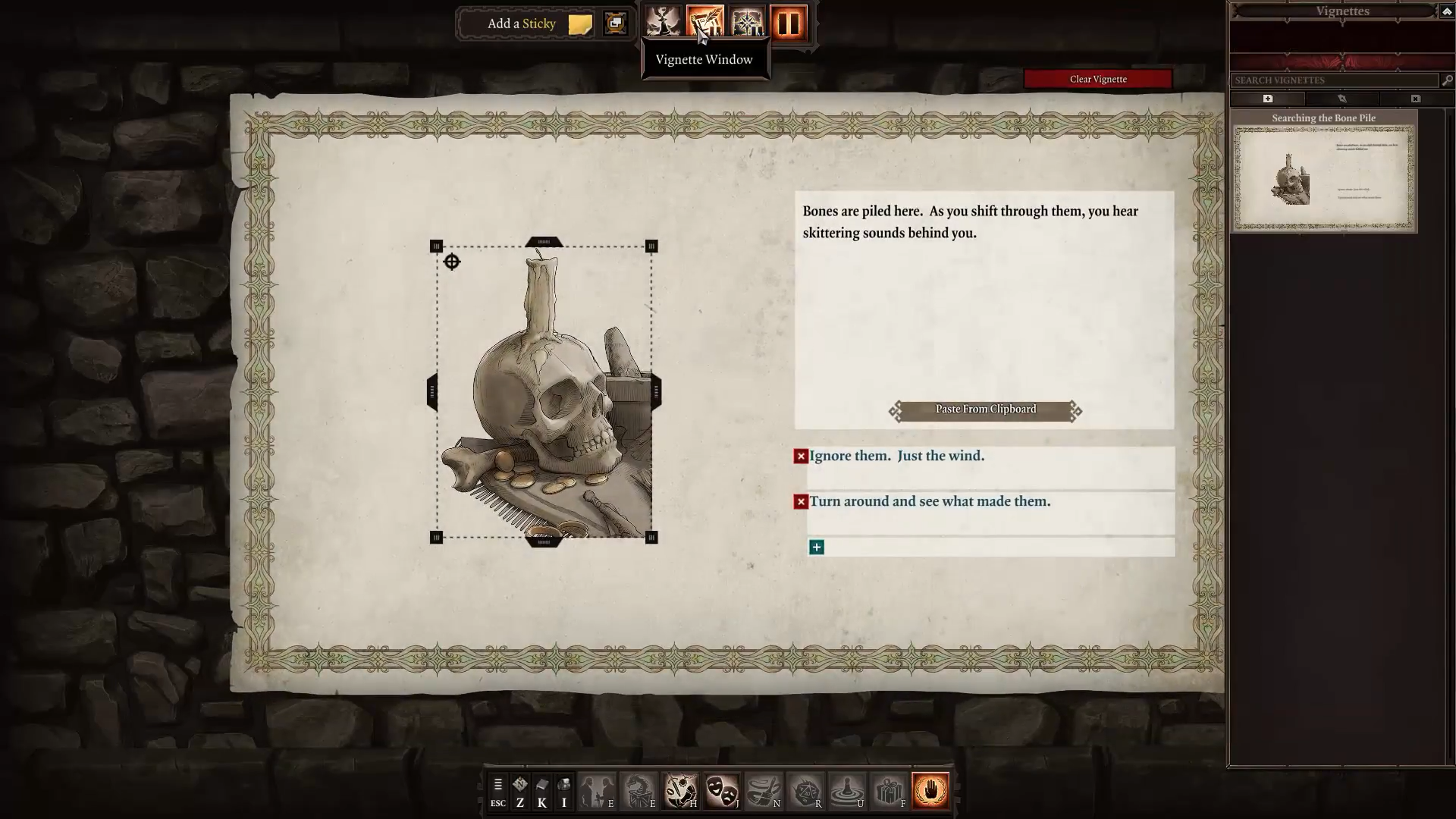 Now this isn’t binding.  Nothing actually happens when players make their choice, it’s all up  to the GM.  The vignettes can be displayed at anytime, though it’s probably a good idea to pause the game before displaying one.  The player’s can’t do anything while a vignette is displayed, but the GM does have to switch to vignette mode and publish the vignette they want to show out to the players.  That time gap could be enough for the players to wander off into parts of the map they shouldn’t be in yet.

The mode that players will spend the most time in (and the GM as well during prep time) is the Game Field mode.  To access this mode, you have to create and load a Scene.  Now out of the box there’s a decent selection of Scenes available, though certainly not  every possible Scene you can think of.  For example, I couldn’t find a ruined interior to match a ruined house in another Scene I wanted to use.  There is a large enough selection, however, that with a little imagination  and skillful storytelling by the GM you won’t notice too much. 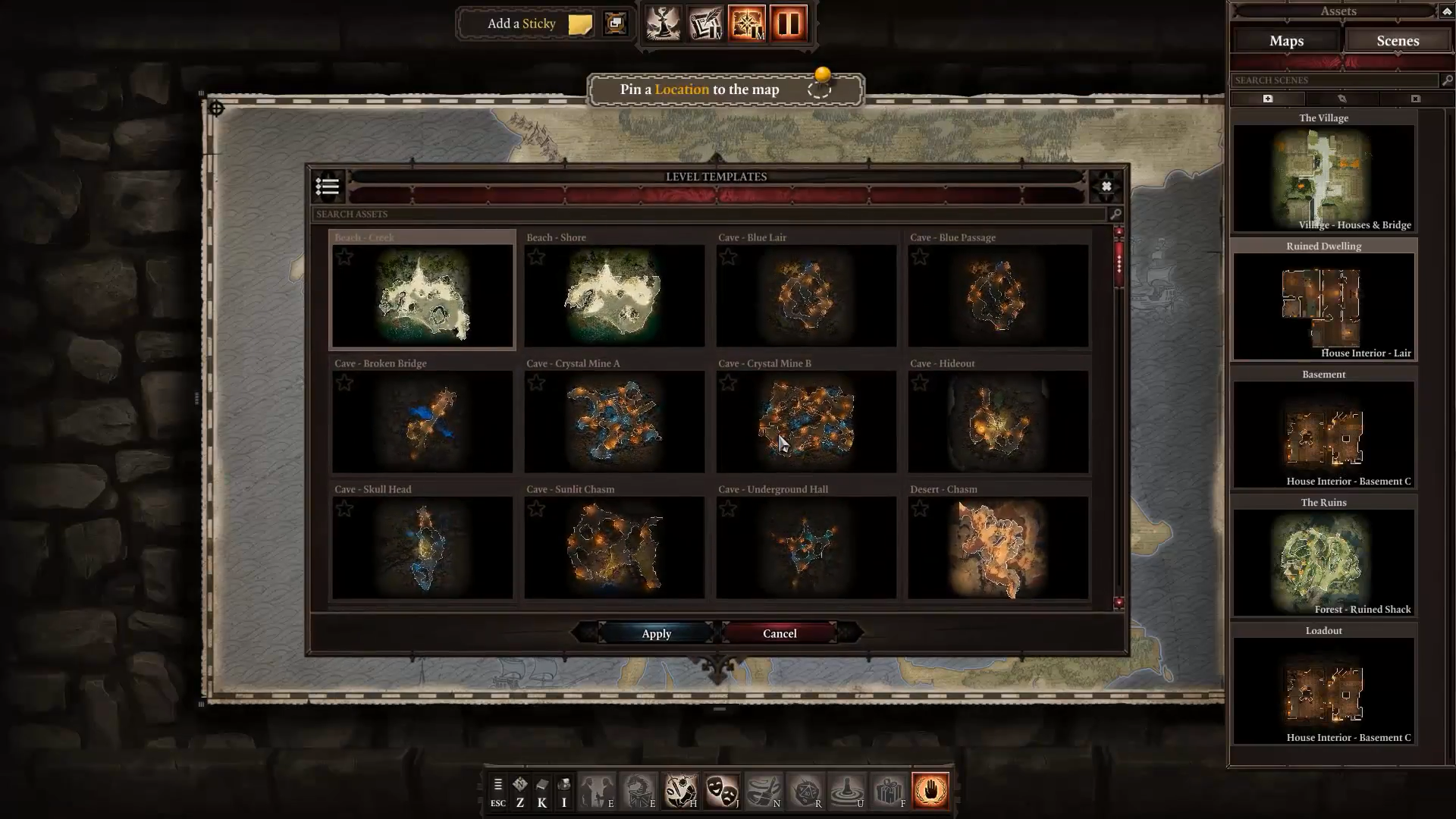 Perhaps the biggest frustration GMs will encounter with Scenes is the utter lack of scripting and customization interactivity.  Scenes are a mostly static backdrop for the story to happen, and little else.  Doors cannot be linked to other Scenes.  Objects cannot be hidden.  Encounters can’t be automatically spawned.  All such things are to be handled by  the GM.

Is it restrictive?  Yes.  Is it bad design?  In my opinion, no.  Once more, I call your attention to the point of the GM Mode – A highly curated adventure.  GM Mode is an “assist for”, not a replacement of, a Game Master.  It helps you with the backdrops, handles the combat rolls for you, and gives you an easy way to collect dice rolls from players.  Conversations, ambushes, hidden items, unexpected reveals, all of these things are upon your shoulders as the Game Master.  If you wish to see just how fun this can be, Matt Mercer (of Critical Role fame)  GM’d a game using the Alpha client and it is a blast  to listen to. 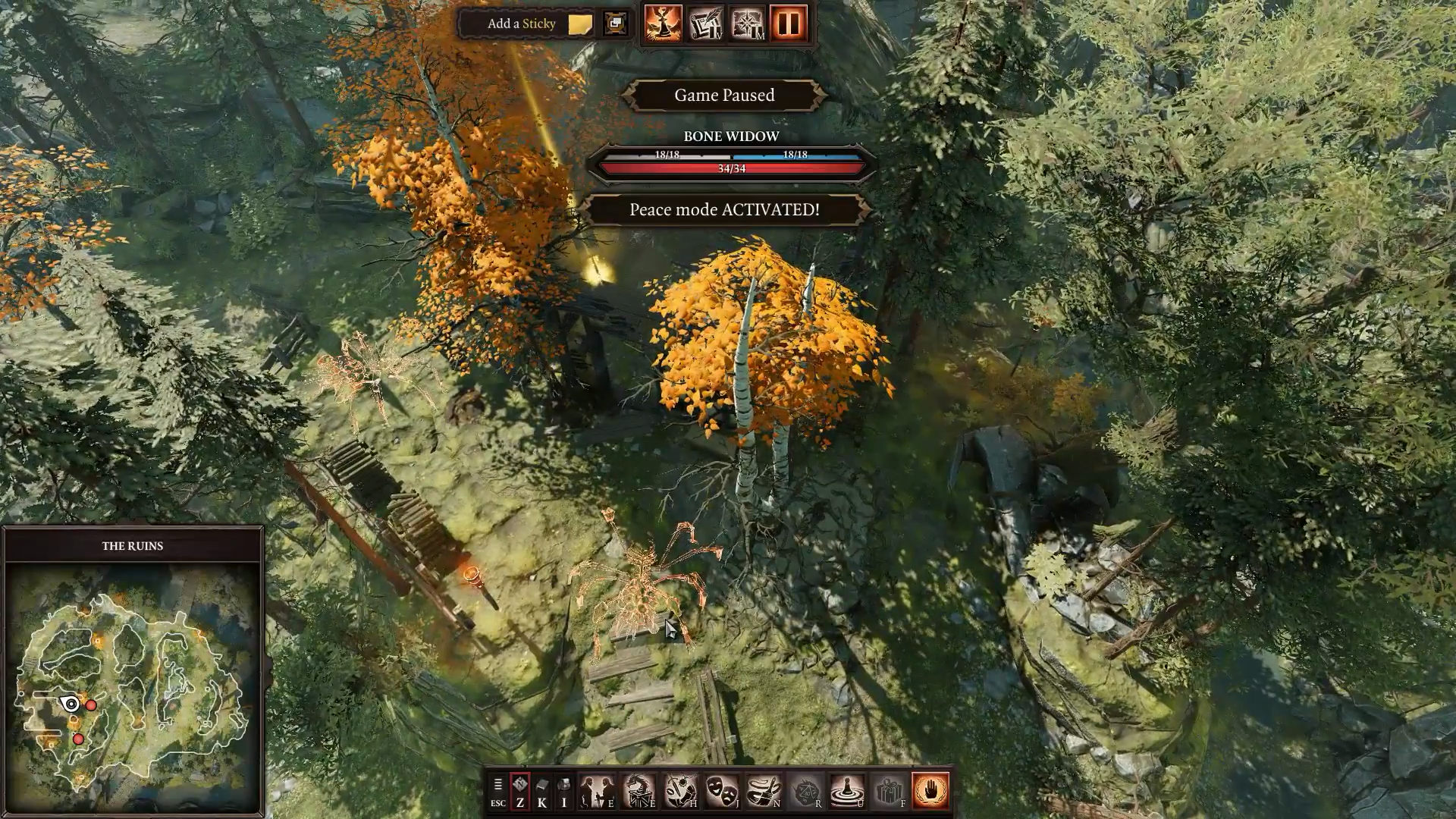 All that said, there are some definite niggles that need correcting.  There are some aspects of placing items and creatures that is very fiddly.  For example, in order to place an item on a table, I first have to drop the item on the floor and then drag the item onto the table.  Want a NPC to sit in a chair?  Well, you’re going to have to possess  the NPC and make it sit down, then release it.  And rotating items, yeesh.  For some reason, you have to start dragging an item and then scroll the mouse wheel.

I have more I could list, however they are admittedly all minor issues.  They do start adding up over the hours as you’re prepping a campaign, so I am looking forward to some patches. 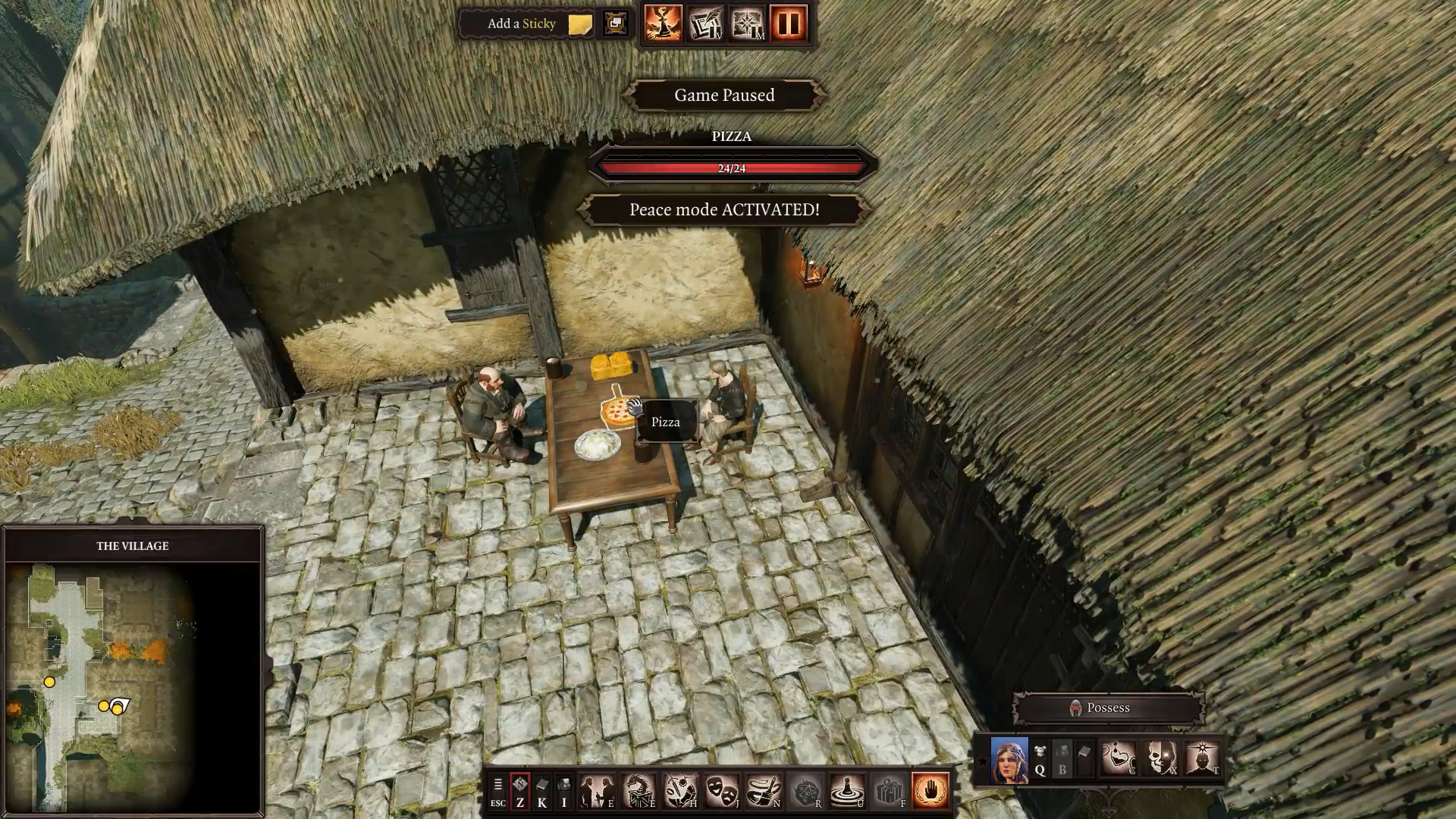 I’m looking forward to working more with this system, especially when it’s combined with the Editor.  The possibility of creating campaigns for other people to run, I find very interesting. Wouldn’t mind taking a stab at running a game or two assuming I can schedule the needed time with four other people.

Would I recommend a purchase just for this mode?  Eh, I’d have to say no.  This isn’t  a replacement for Fantasy Grounds  or similar products, so if you’re looking for a digital tabletop experience I’d suggest looking elsewhere.  However if your looking for a CRPG with a tabletop flavor, then this will be perfect.  Not to mention the main campaign is pretty darn good and can be played with friends as well.

Now if you’ll excuse me, I need to get back to placing bone spiders.  Everywhere.

You can check out our review on Divinity: Original Sin 2  to see what you’re missing out on. If you do plan to pick up this game, our Getting Started Guide will help you get the most out of your adventure.