Divinity: Original Sin 2 is in full swing, and one of the major issues players are having with the game is Builds. What Build do I use? What’s a good Build for a Warrior? Ranger? Mage? etc. Since the game is rather difficult this has come much more into focus than one would expect. In this Build Guide were going to cover the Spear user: Warden. Let’s jump into this Build and see just how it works.

The Warden is a hybrid Warrior & Ranger Build that uses Spears and Bows to vanquish its enemies. The reason Wardens can do this effectively is because both Spears and Bows use Finesse for their damaging Attribute, allowing Wardens to deal maximum damage with both weapon types. This is also made possible by pumping points into Warfare, which increases all Physical Damage from any source. Since it only costs 1 AP to switch Weapons you don’t lose a whole lot of damage per turn, especially since you can use Adrenaline, Haste or Flesh Sacrifice. 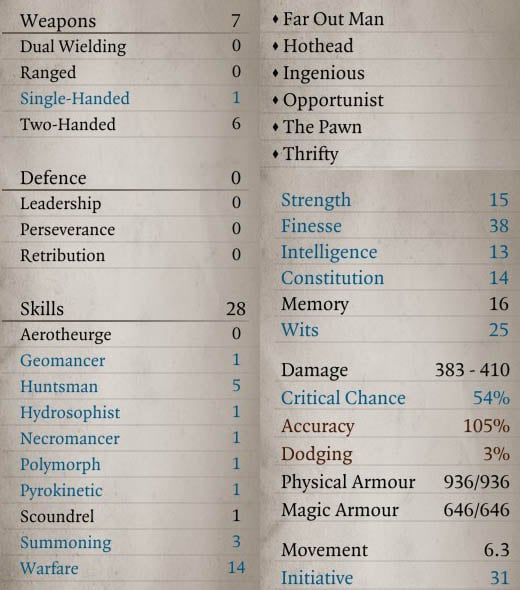 Stats on my level 16 Warden. The high Strength isn’t intentional but is mostly from gear. Putting a ton of points into Warfare allows this Build to actually work.

As mentioned above the Warden focuses on Finesse in order to increase damage with Bows and Spears. Wits are also useful to Wardens because it increases Critical Chance, and Wardens will have around 200% Critical Multiplier mid-game which is better than many Builds. There are no hard an fast rules here, but Wardens should work on pumping Finesse through out Act 1 and then consider adding some points into Wits sometime in Act 2 (Finesse should be maxed or closed to maxed by then).

Wardens can utilize any type of Armour which means they will have a good balance of Physical and Magical, which works well for this Build. Because Wardens are capable of fighting at range or close combat, this will give them some flexibility to decide how to engage based on the enemies they are facing. Wardens should look for Armour with bonuses to Finesse, Warfare, Wits and Critical Chance, in that order. Huntsman or Scoundrel are also not bad if you can get them without sacrificing anything else. Slot Masterwork Runes of Power into your Armour and Fire Rune of Power into your Necklace.

Giant Flame Rune of Power is still the best Rune to slot into your Necklace, despite the bonus to Intelligence. Mystical Giant Masterwork Rune is the best you can do in your Spear because their is no Rune that adds Finesse and Physical Damage.

As for Weapons, Wardens will need a good Spear and a decent Bow (I recommend a Bow over a Crossbow because Wardens need to move a bit more than other Ranger types). Bows are easy, but Spears can be difficult to find. The Spear of Braccus Rex is a good early game Spear located beneath Fort Joy that can get you going. It’s going to be hard to find a Spear with the perfect bonuses, but you are looking for the same ones as on Armour. Always take the one with the highest damage if you can’t decide. If you’re Spear has a Rune Slot, you’ll want to slot Mystical Masterwork Runes into them if you can.

One of the hardest parts about making a Build in Divinity: Original Sin 2 is getting your Abilities distribution correct. It’s easy to get spread too thin, and often people make the mistake of not spreading points around enough. The bonuses you gain from Abilities in this game are somewhat different than the original, so it’s easy to see why people can get confused. Let’s take a look at what Abilities and Talents you need for a Warden. 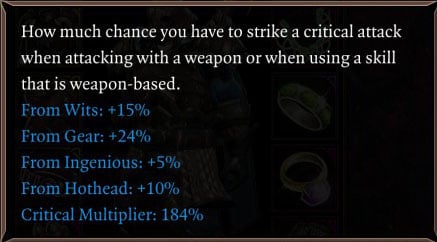 Putting points into Two-Handed will not only increase your damage with Spears, but also your Critical Multiplier with your Bow.

Wardens deal damage with two different Weapon types so focusing on the common denominator, Physical Damage, is key. This is achieved by maxing out Warfare and then placing points into Two-Handed to capitalize on high Critical Multiplier and added damage to Spear attacks. In Act 1 Wardens will want 2 points into Huntsman, 1 into Scoundrel and the rest into Warfare. In Act 2 Huntsman will go up to 3, and then all other points will go into Warfare until it is capped and then all remaining points will go into Two-Handed until it is capped. Two-Handed will not only increase your damage with Spears, but also Bows because of the Critical Multiplier increase.

Hothead – This Talent will help to increase your Critical Chance and Accuracy with both Bow and Spear. This is a solid first or second choice.

The Pawn – I like this Talent for this Build because you will need to move around a bit in order to get full use of melee and ranged skills. This will help you get up high when shooting, and get to your target when poking.

Opportunist – This will allow you to deal more damage when in melee combat. You can take this one earlier if you find that you don’t need The Pawn that much.

Far Out Man – This Talent will increase the range of your Bow attacks by 2 meters, which is helpful when shooting. You may not need this Talent, depending on how you play, however.

Picture of Health – Always a decent Talent for characters with high amounts of Warfare. Consider taking this one if you don’t need Far Out Man.

Now that you’ve decided which Talents and Abilities you want, you’ll need to identify just which Skills work best with this kind of setup. Wardens will use a mix of Huntsman and Warfare Skills to deal damage. Since Builds evolve over the course of the game, I’m going to put the Skills in order from earliest obtainable to latest, because you won’t be able to get them all right way.

First Aid – Just an all around great skill for removing Status Effects and healing a solid amount. Also only costs 1 AP which is super nice. Has a short range, so get up high to help improve that if you need to use it on a teammate.

Tactical Retreat – This skill has so many uses with this Build. Use it to get up high to get increased damage with Bow attacks, or to jump into the fray when you are ready to melee. Also grants Haste, which rocks.

Ballistic Shot – This is extremely powerful because it adds 5% damage for every meter you are from your target. This skill is a great way to take down a target in a single Bow shot from up high. Probably the best all around Bow skill there is.

Sky Shot – Not as good as Ballistic Shot, but still pretty good. Can give you a height advantage when you don’t have one. Since Huntsman doesn’t have a ton of Skills, this is another one that’s just good to keep on your bar because you may need it.

Marksman’s Fang – I typically use this skill on enemy summons or targets that have high Armour but low health. Can hit multiple targets and is just all around really good.

Barrage – This skill deals decent damage for 3 AP (180% vs a basic attack). The nice thing about it is that you can target multiple enemies. Good for finishing many weak enemies.

Reactive Shot – You can drop this into an area with a bunch of enemies and then leap into it with Phoenix Dive to make enemies walk into it and attack you. Be sure to land near an enemy so you also hit them with an Attack of Opportunity.

Battle Stomp – A great AoE with a Knockdown. You can use this on enemies above or below you, which works great with this sort of Build. Use only when you can get the Status Effect.

Blitz Attack – A great gap closer that hits up to 2 targets. Only deals 70% damage to each target though, so keep that in mind when using. You can even use this at point blank to hit 2 targets if you need.

Whirlwind – A tremendous AoE that deals full damage to each target struck. Try to make sure you hit at least 3 targets when using this or save it for a moment when you can.

Challenge – As of February 1st, 2018 this Skill now only costs 1 AP, making it viable for this Build if you put 3 points into Warfare. Buffs Physical and Magic Armour in addition to increasing your damage by 15% for 1 turn.

Thick of the Fight – A great skill that buffs ANY type of damage for 2 turns dependent upon the number of enemies around you. You can always use this when in melee and then Tactical Retreat up high and then unload with Bow attacks.

Onslaught – This skill does insane damage. Deals 250% damage vs a single target, all but ensuring their death. Save this for the hardest targets in a fight to eliminate them quickly.

When playing a Warden I advise starting battles with your Bow as enemies usually begin a good distance from you. Use Tactical Retreat to get up high and try to hit a far away target with Ballistic Shot to deal good damage. Then end your turn. On turn 2 use 2 more bow attacks trying to pick off far away targets like archers or mages. The strategy here is that turn 1 and 2 you unload with a Bow on targets that are not likely to group up. Then turn 3 switch Weapons and Phoenix Dive into the battle. AoE with Whirlwind or Battle Stomp or use Onslaught on that tough target that has high health or Armour. After you’ve exhausted your melee skills Tactical Retreat up high and finish off any remaining targets with Bow attacks, which will now be off cooldown.

Tactical Retreat out and then Phoenix Dive in. Rinse and repeat!

A couple of the reasons this combination works very well, besides the shared damage type (Physical), is that both Huntsman and Warfare have very few damaging skills compared to elemental-type Builds. Most Warrior Builds supplement their skills with Polymorph for this reason, but Polymorph uses Strength and we use Finesse, so we use Huntsman. Also, Huntsman only has really one good Source Skill in Arrow Storm, and using a Spear allows to use Skills like: Onslaught and Thick of the Fight to help supplement that.

A couple things to note here are that it will cost you 1 AP to swap to either Bow or Spear, so keep that in mind. However, the game charges you 1 AP per Weapon or Shield, so we minimize this amount by using two Weapons that require both hands, similar to the way the Elmental Champion works with Staves. Also note that Spears have a full 1m range over that of any other melee Weapon so they can strike from further away and Whirlwind has larger AoE. 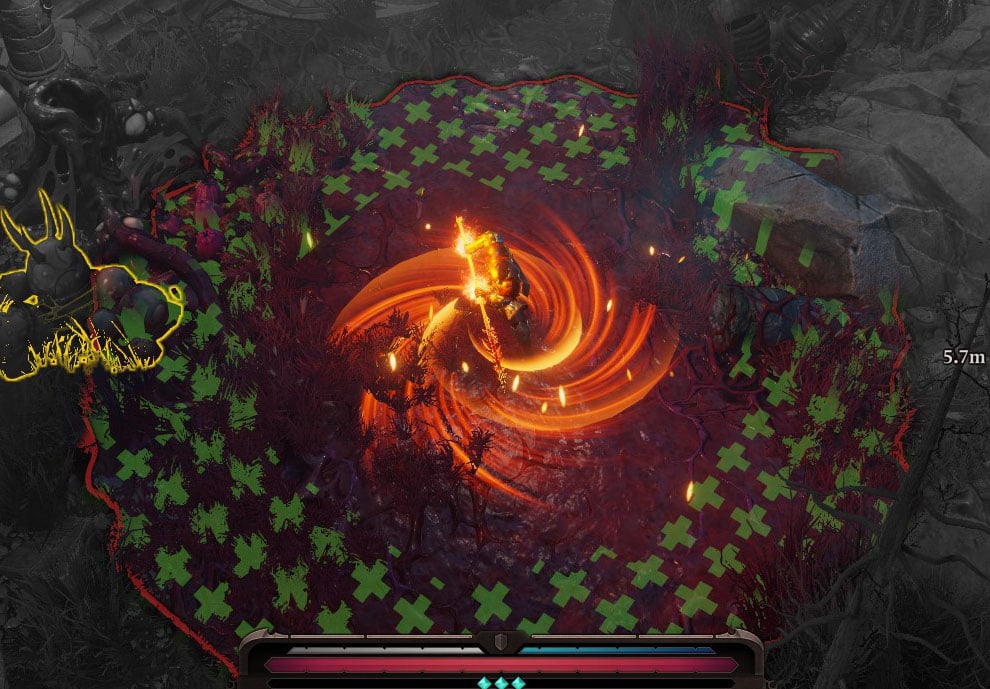 An extra meter my not seem like a lot, but sometimes it’s just enough to hit those extra couple of targets.

Lastly, if you really like this Build, consider trying it out in Lone Wolf, because it works AMAZING. Having 6 AP per turn makes this Build even more effective because: 1) you’ll hardly notice the 1 AP to swap Weapons and 2) you’ll churn through Skills much faster, making the additional Skills much more noticeable against other Warrior or Ranger Lone Wolf Builds. You really have the best of both worlds between an Archer and a Warrior and you sacrifice minimal damage to achieve this. Swap out The Pawn for Executioner if you do this.