Divinity Original Sin 2 Definitive Edition arrived a little over a 2 weeks ago, and with it came some interesting changes to the game. While most Builds remain untouched, there are some tweaks to a few of them. Players have been asking me to not only update these Builds, but also create new ones. In this guide I will be introducing the second Summoning Build this week: Summoner of Sparks, and explaining just how it works. 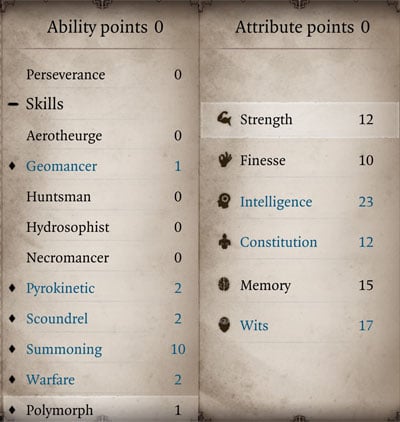 Stats on my level 10 Summoner of Sparks. At this stage of the game you won’t have had points to increase Pyrokinetic very high.

The Summoner of Sparks uses a mix of Summoning, Warfare and Pyrokinetic Skills in order to deal both Fire and Physical Damage. The skill Master of Sparks has long been used by many players to buff their own personal damage with each swing, however, with the Summoner of Sparks we take this a step further. By buffing an Incarnate and our own character we get 2x the fun. In addition, you can buff the Incarnate with Supercharger for 100% increased damage, which is something you cannot do to yourself.

The best way to start this Build is by picking the Conjurer Class, removing the points from Constitution and placing them into Intelligence and Wits. Then remove the point from Leadership and place it into Pyrokinetic. Then remove Dimensional Bolt and Elemental Totem and select Ignition and Searing Daggers.

Start as a Conjurer and change it to look like this.

Summoner of Sparks Attributes and Equipment

As far as Attributes go, you will be putting most of your points into Intelligence in order to increase you damage, but some points into Wits for the Initiative and Critical Chance doesn’t hurt. Some points will also need to go into Memory as this Build uses a LOT of Skills early on. Also consider adding a couple points to Strength in order to be able to use Strength-based Armour.

The Summoner of Sparks, if points were placed into Strength, can use a mix of Armour types and should focus on balancing their Armour as best as possible. Unlike the Battlemage, you don’t need to worry about Fire Resistance with this Build because you only use one skill that can set things on fire. You want to look for Armour with bonuses to Summoning on it first and foremost, in order to reach 10 Summoning as quickly as possible. If you cannot get Summoning, Pyrokinetic or Intelligence are recommended.

Weapon-wise you’ll be using a Staff of some sort. A fire staff is recommended, as Pyrokinetic will increase the damage you deal with it, but you can use other types if you cannot find one. Priority bonuses are Critical Chance and Intelligence, but Two-Handed or a rune slot are also good. 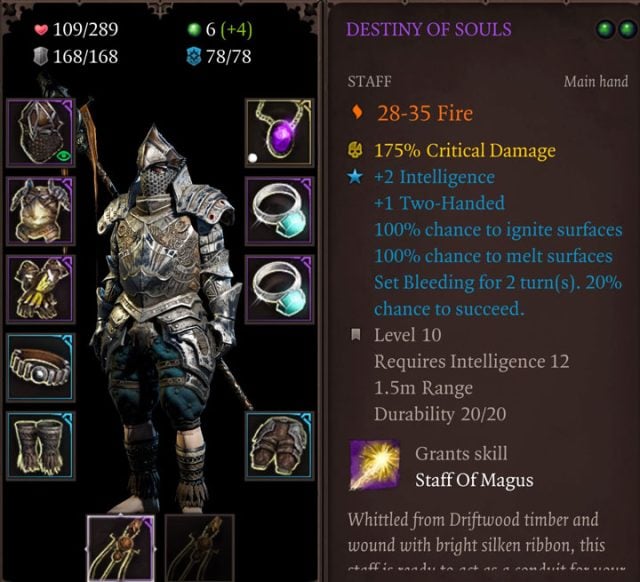 Not the greatest staff in the world, but it’s fire, has two-handed and intelligence. In addition it can set Bleeding, which works well with Torturer.

Summoner of Sparks Abilities and Talents

Torturer – Between Ignition and Bull Rush you will be able to set Burning and Bleeding on enemies through their Armor from nearly the beginning of the game. Burning enemies lose 15% Fire Resistance, which helps you deal more damage to them. Take this one during Character Creation.

Mnemonic – This Talent can help to alleviate some of the heavy investment into Memory early on in the game, but you shouldn’t need it later. I’d recommend Opportunist once you get a bit further in to the game.

Savage Sortilege – This Talent becomes more useful when you have a higher Critical Chance, and is really only used to allow your Sparks to critically strike. Consider taking this Talent at the beginning of Act 2 or when your Critical Chance hits about 20% ish.

Hothead – Because you will be relying on the Accuracy of your character in order to proc Sparkmaster, this Talent can really help to ensure your Whirlwinds hit everything around you, increasing your damage potential. +10% Critical Chance is also nice as well.

Executioner – This talent may increase your overall performance because of the extra AP that you gain, but your Incarnate will get more kills than you once you reach Act 2, so it may not be the best investment. Definitely take this one if you play Lone Wolf though.

The Summoner of Sparks does exclusively Fire Damage itself, but can deal substantial Physical Damage with its Incarnate if it wishes. Below is a list of Skills you will use and I will put them in the order you should obtain them in.

Ignition – An AoE that can set all enemies on fire and ignores friendlies. A great way to increase your overall damage against enemies for 1 AP when used with the Torturer Talent.

Searing Daggers – Although you won’t use this once you’ve obtained Phoenix Dive, it’s a great way to be able to summon a Fire Incarnate early on in the game by creating a fire surface. Can deal a bit of damage as well, or set enemies on fire.

Conjure Incarnate – This will be your default summons pretty much the whole game, and you will conjure it in fire in order to gain a Fire Incarnate. This will help improve its efficiency with Master of Sparks and Whirlwind / Battering Ram (from Power Infusion), by changing its damage type to purely fire.

Battle Stomp – This skill will proc Sparking Swings and Master of Sparks and can hit many targets so is a viable skill here. You won’t get the Knockdown unless your teammates deal Physical Damage though, unfortunately.

Sparking Swings – This is skill is not as good as Master of Sparks because it shoots less Sparks when you attack, but it’s still better than nothing earlier on in the game. You cannot cast this on your Incarnate either, and it does not stack with Sparkmaster, but is instead replaced by it.

Bull Rush – This will be your main source of spreading around your Sparks when Whirlwind is on cooldown. It sets Bleeding, which does Piercing Damage, and it can be used nearly every turn!

Farsight Infusion – This skill will increase your Incarnate’s damage by 25%, give it Magic Armour and give it a ranged attack with a 1 turn cooldown. You’re really using this one for the first 2 bonuses, but the ranged attack can come in handy earlier in the game before you gain Master of Sparks.

Power Infusion – this skill increases your Incarnate’s damage by 25%, gives it Physical Armour and the Skills: Whirlwind and Battering Ram. This will make it possible for your Incarnate to hit many targets with Sparks, so it is crucial.

Supercharger – Increases the damage of your summons by 100%, but they die the following turn. While it may seem like a bad idea to use this on a fully buffed Incarnate, you can end some fights in 1 or 2 turns by doing so. Use it when you know your Incarnate can hit many targets and you have enough AP to buff it fully first.

Whirlwind – One of the best overall ways to spread your Sparks around, be sure you can hit as many targets as you can with it in order to get best results. Bull Rush into a pack of enemies and then use this for massive damage. Bonus points if you kill everything in one turn.

Adrenaline – A skill all summoners should possess and one really any character can make use of. Getting your Incarnate summoned and buffed up costs 5 AP, and this will give you a total of 6.

Phoenix Dive – This skill will replace Searing Daggers as your means of summoning a Fire Incarnate once you reach Reaper’s Coast. It costs one less AP and will grant you some mobility, which will help tremendously. Bonus that it can also set enemies on fire.

Master of Sparks – The key to this Build, and a must once you reach Reaper’s Coast and have access to Source Skills. Use it to buff yourself, your Fire Incarnate and even other party members at the beginning of combat for best results.

Firebrand – You can buff your Incarnate and yourself with this skill so that you both deal increased damage. In addition, it will buff other members in your party as well, which is just the icing on the cake.

You can add other Skills to this list, but these are the ones I would recommend. Onslaught for example strikes a target 5x, which works well with Master of Sparks, but it has a hefty cost of 4 AP and 2 SP. You can also add Dominate Mind to this Build successfully, but it costs 3 AP, so you’ll have to decide how you want to spend your Action Points.

Race is not a huge factor in this Build, but Elf is a good choice because you need as much AP as you can get and you are not using a Shield, making the Constitution reduction from Flesh Sacrifice not hurt as badly. Lizard is also not bad because Dragon’s Blaze gives you a cheap way create a fire surface to summon your Incarnate in. Playing this as Fane and casting Time Warp can be nearly game breaking as well, so if you have him in the party consider using him for this Build. 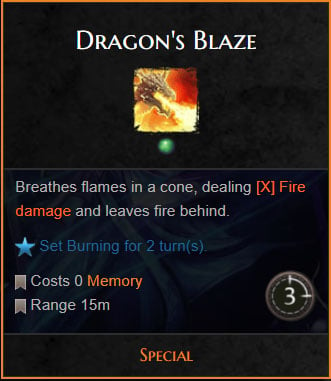 Dragon’s Blaze is a good reason to choose Lizard. For 1 AP you get decent damage, and it gives you a surface to summon a Fire Incarnate it.

Because you need around 6 AP to summon and fully buff your Incarnate it is recommended you do so before entering combat when possible. This will allow you to use your AP to attack during your first turn of combat, and make you more effective. This isn’t always possible, but try to get in the habit of doing so when you can.

If you have the Savage Sortilege Talent, Enrage will make all of your Sparks critically strike. This can improve your damage tremendously, just make sure you are in position to hit many targets when you use it. Also note that your Incarnate does NOT possess this Talent, so it will not ever critically strike with its sparks. 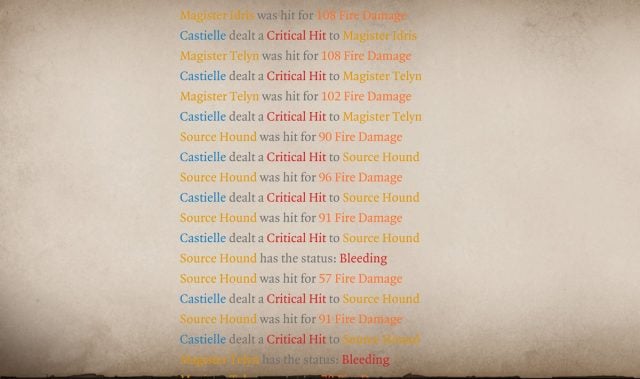 Enrage will make all your Sparks Critically Hit if you have Savage Sortelige, which can be devastating.

You can play the Summoner of Sparks and deal Physical Damage instead of fire if you wish by placing points into Strength and Warfare instead of Intelligence and Pyrokinetic. You will deal less damage with your Sparks making the Build less optimized, however, it may help to balance the damage types of your party depending on your make-up. If you need more Physical Damage consider trying this out, and remember that you can summon your Incarnate outside of fire to make it deal Physical Damage as well.

The benefits of this Build are that you don’t set the screen on fire when compare with a Battlemage, making it much safer to play with other melee units. In addition, when compared to other Builds that use Master of Sparks, you get more bang for your buck. This is because of the duality that summoning an effective Incarnate brings, allowing you to capitalize on a skill that can be used by many characters at once. Two is always better than 1, right?