Divinity Original Sin 2 Definitive Edition has been out for several months now, and with it came some interesting changes to the game. While most Builds remain largely the same, there are some differences that impact the way you play. Because of this players have been asking me to not only update these Builds, but also create new ones. In this guide I will be introducing the Occult Flameweilder, which is long overdue, and explaining just how it works. 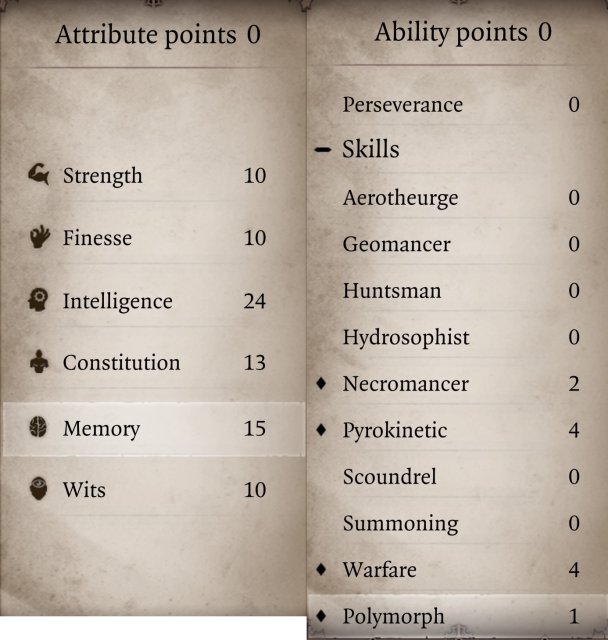 Un-gearded stats on my Occult Flamewielder (level 10). From this point on I’ll take Warfare and Pyrokinetic up to 10 each alternating, only stopping to place 1 more point into Necromancer for Silencing Stare.

The Occult Flamewielder is a Mage Build that utilizes both the Pyrokinetic and Necromancer Skill Lines to deal two types of damage: Physical and Fire. Most Mage Builds will be able to max out at least 2 schools of magic, and because they share a common Attribute (Intelligence), they lose very little effectiveness. And, what they miss out on in Critical Damage, they make up for in flexibility of damage types. This is true for all Mage Builds, no matter which schools of magic they choose, but there are solid connections between these two in the forms of Corpse Explosion and Mass Corpse Explosion. 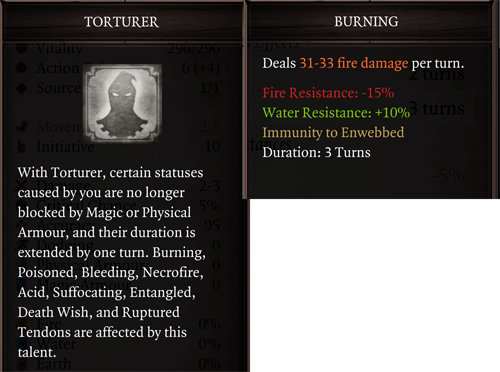 Torturer is what makes this Build work. Because you can debuff enemies to your attacks for 1 AP with Ignition, you can deal substantial damage for many turns.

I have made other such “hybrid” Builds with the Terramancer and Crystalline Cleric, but neither of those Builds relied on the Torturer Talent to be good. This is simply because Torturer was changed with the Definitive Edition, and before this change Earth/Necro and Water/Necro were more effective than Fire/Necro. With the Occult Flamewielder we take full advantage of this Talent to set enemies Burning, reducing their Fire Resistance through their Armour, increasing the overall performance of our Pyrokinetic Skills.

The best way to start this Build is by picking the Wizard Class, and changing Geomancer to Necromancer. Then select the Ignition, Searing Daggers and Mosquito Swarm skills. This will give you access to an early game Wand, but you will need to keep an eye out for a Shield. As far as Races go, Elf (or Undead Elf) is always great when you play a Necromancer because of Flesh Sacrifice, but you can play this Build with a Human as well, for the increased Critical Chance and Critical Damage.

The way I begin an Occult Flamewielder.

As far as Attributes go, you’ll want to pump Intelligence to max as quickly as you can, only putting points into Memory to gain Skills you need, and Constitution to use a Shield if you decide to use one. Once Intelligence is maxed out, you’ll focus on Wits to increase your Critical Chance.

Weapon-wise, you can go three completely different directions if you wish. You can use a Staff, Wand and Shield or Dual Wands. All will work, but they come with their own advantages and disadvantages. Of the three, I suggest using a Wand and Shield for added Armour, and to be able to use the Bouncing Shield skill. Bouncing Shield helps with your Physical Damage output, and that helps to keep the Occult Flamewielder’s damage more balanced between Physical and Fire. Your Wand would ideally be Fire Damage, and would have Critical Chance, Intelligence and a Rune Slot if possible. 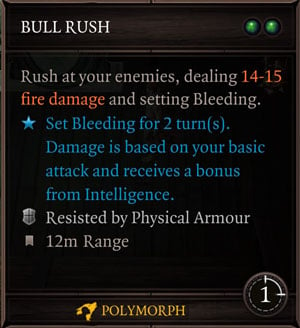 Bull Rush scales with Intelligence when using a Wand or Staff, and does the damage type of those. This makes it perfectly viable for a Mage Build, and provides some mobility.

Armour-wise you will be using Intelligence-based Armour, as that is where the majority of your Attribute points will lie. This will give you high Magic Armour, which is great because Pyrokinetic Builds tend to send Fire everywhere, and that will usually hit you now and then. Prioritize Intelligence, Pyrokinetic and Warfare, but Critical Chance and Wits are also good.

Torturer – This Talent should be taken first by all Pyrokinetic Builds because it allows you to Set Burning from your very first attack, allowing subsequent attacks to deal increased damage. Take this one during Character Creation.

Elemental Affinity – This Talent allows you to cast many Necromancer Skills if you use Flesh Sacrifice or Raining Blood, and many Pyrokinetic Skills if you are standing in fire (which happens). Take this one second.

Savage Sortilege – This Talent will allow your Pyromancer and Necromancer Skills to critically strike, in addition to Bouncing Shield. Consider taking this one when your Critical Chance hits about 20% around the beginning of Act 2.

Executioner – Because you deal two different damage types you will be poised to “finish off” enemies no matter what Armour type they have the most of. This makes Executioner a great choice for this Build and should be considered later on in the game.

Far Out Man – This Talent works well for this Build because it increases the range of Infect, Mosquito Swarm, Bouncing Shield, Bleed Fire, Fireball, Corpse Explosion, Laser Ray, Spontaneous Combustion and Bull Rush. If you find yourself not gaining the Executioner bonus AP often, then use this Talent instead.

Occult Flamewielders will use a mix of Pyrokinetic, Necromancer, Polymorph and Warfare Skills. While this may sound like a broad investment of stat points at first glance, many of these Skills have overlapping requirements. This actually makes them fit together rather well, which you can see from the list below.

Ignition – This skill will set Burning on enemies in a large AoE, with the Torturer Talent. It also avoids friendlies and deals modest Fire Damage, so it’s a good utility skill for 1 AP. You’ll use this first to debuff enemies you wish to purse with Pyro Skills.

Searing Daggers – A decent skill that allows you to Set Burning on many enemies, if not struck already with Ignition, or focus fire 1 down. This skill is also good for giving yourself Elemental Affinity.

Mosquito Swarm – Deals decent damage and Sets Bleeding through Armour with the Torturer Talent. It has very good range (13 meters) and heals you for a decent amount of Vitality, which is nice.

Corpse Explosion – A great Crafted Skill that deals insane Physical Damage for 1 AP, and one that very few Builds are poised to take full advantage of. Can hit multiple enemies, just be sure not to hit your party members!

Bleed Fire – This Crafted Skill is a great way to further reduce the Fire Resistance enemies have, allowing you to deal even more damage with your Pyro Skills. In addition, it places Fire beneath enemies, prompting them to waste AP moving.

Bouncing Shield – This skill works really well with this Build because it doesn’t scale off of Strength, only Warfare, which you will have a lot of. You can also increase the damage by upgrading your Shield, which you will be doing periodically.

Bull Rush – This Skill may seem like an odd fit here, and you would not be wrong. However, with the Torturer Talent you can Set Bleeding through Armour, and it scales with Intelligence and deals Fire Damage if you have a Fire Wand equipped. This allows you to deal more Fire Damage, Set Bleeding and gives you some mobility if you need to move out of a bad situation.

Fireball – A great AoE that deals decent damage and can help control the battlefield. This will be your main source of burst Fire Damage until you gain Laser Ray later in the game, so make the best use of it you can.

Spontaneous Combustion – A great ranged skill that not only deals decent damage, but also consumes the Burning and Necrofire Status Effects of an enemy into instant Fire Damage. Since you can Set Burning again easily with the Torturer Talent, use often to deal burst single-target damage.

Infect – Deals substantial single-target Physical Damage at long range, but has a hefty cost of 3 AP. Use this one only when you have Elemental Affinity, or would gain the Executioner bonus for doing so to maximize AP efficiency.

Character Levels 9 and Up

Laser Ray – A great damage dealing skill that can hit multiple targets in a straight line. You will use this skill and Fireball for the majority of your Fire Damage with this Build. Bull Rush can be used to position yourself for maximum effect.

Mass Corpse Explosion – This skill is hard to use effectively but when you can it deals devastating damage for 1 AP and 1 SP. Try to use when corpses are grouped on your target. Can one shot enemies if done right.

Bone Cage – A great skill for buffing up your Armour and the more dead bodies around the better. Try to save this one for mid fight after at least 1 or 2 enemies have gone down for maximum effect.

Silencing Stare – This skill is a great way to strip Magic Armour of enemies that are highly Fire Resistant. Use this to help out your other party members who deal Magic Damage types when your Fire Damage will not be helpful.

Deflective Barrier – A great skill for buffing your Physical Armour and also dealing some damage to enemies. I like to use this turn 1 or 2 of any engagement to get the best results.

Challenge – This skill costs 0 AP, increases your damage and boosts your Armour. What more could you want? You won’t get it until level 16, but make sure that you do!

Because the Occult Flamewielder can do either Physical or Fire Damage, it is advised that they go after the first Physical Damage dealer and Magic Dealer in your party. This will provide them the opportunity to see how the first few turns play out, and allow them to make judgments on which targets to prioritize based on remaining Armour/Vitality values. This should be no problem if you are playing with a Wand and Shield, since you should be able to withstand damage until you reach your turn no problem. You can Delay your turn if needed.

When placing a Occult Flamewielder into your party, you’ll want to put them in a mixed damage bunch. Ideally you’d have another Physical Damage dealer, another Magic Damage dealer and perhaps another split damage type (such as an Archer or Summoner). You’ll also want to avoid placing them with any Water Damage based characters, since these two damage types do not work well together.

Elemental Affinity can be difficult to achieve, particularly if you are not an Elf. Seering Daggers is a great way to gain it for fire, if you fling one dagger at yourself. Consider adding Raining Blood because it not only will give it to you, but it will Set Bleeding through Armour because of the Torturer Talent.

Lastly, this is a more advanced Build. This is not only true because of the split damage types, but also because Fire Damage can hurt your party members very easily, and you have no CC to speak of whatsoever. If you have a Warrior out front swinging away, he’s not going to be thrilled if you drop a Fireball on his head. This means you will have to calculate and plan accordingly, and I highly advise keeping your melee unit(s) on the outer edges of combat, so that the middle is open for AoEs.