Divinity: Original Sin 2 is in full swing, and one of the major issues players are having with the game is Builds. What Build do I use? What’s a good Build for a Warrior? Ranger? Mage? etc. Since the game is rather difficult this has come much more into focus than one would expect. In this Build Guide were going to cover the Lone Wolf Build: Elemental Champion. Let’s jump into this Build and see just how it works. 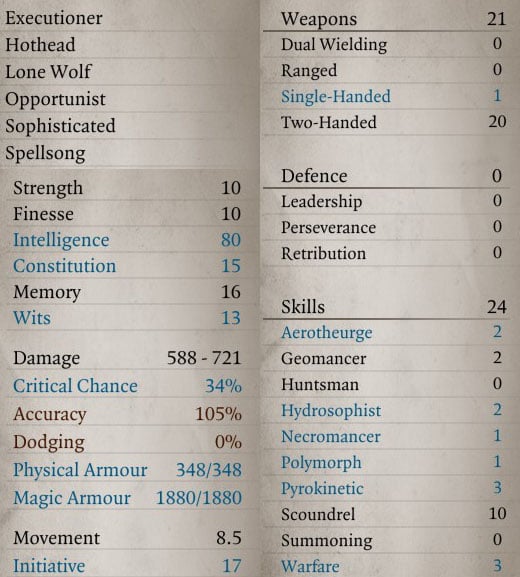 The stats of my Lone Wolf level 16 Elemental Champion. Because we use the Enrage Skill we do not need very high Critical Chance. Ideally you would have more Initiative than I have so that you would go first in combat.

Elemental Champions focus primarily on Intelligence to increase their damage with all elements, only putting points into Wits later in the game after Intelligence is maxed, and Memory to gain some Initiative and to be able to use the required Skills. The reason that we crank Wits a bit later on is because of the changes to the Definitive Edition, which prevent us from stacking Intelligence as high as we used to. Because of this Enrage will be much more useful earlier in the game, and will become less useful later in the game.

By pushing our Critical Multiplier so high in conjunction with very high Intelligence, we deal tons of damage when Enraged.

Elemental Champions use Intelligence-based Armour, which isn’t ideal for this Build because you’ll be in close proximity to melee units. We’ll supplement this with Fortify, but you’ll still be on the line between too little and just enough. You’ll want Armour that has either Intelligence or Two-Handed if possible, only looking for gear with Scoundrel after you’ve acquired Enrage. Despite the lack of focus on Critical Chance, I would still place a Fire Rune of Power into your Necklace simply because it is the best of what you can choose from. Place a Frost or Fire Rune of Power into your Chest Armour to increase Intelligence.

These Runes can help increase your damage when slotted in Armour and Necklaces.

Weapon-wise this is a tough Build to acquire the right gear for. Elemental Champions change their damage type by switching Staves on the fly, which means you will need one of each type: Fire, Water, Poison and Air. The tough part about this is that it’s hard to find a good Staff of each type, let alone just a good one in general. Ideally your Staff would have Intelligence, Initiative, Set Blinded, Set Silenced and at least 1 Rune Slot (the more the better). This will allow you to increase the damage of your attacks via Intelligence and Runes, keep your turn order high and allow you to Mute and Blind your opponents, reducing the amount of damage you may take.

One of the hardest parts about making a Build in Divinity: Original Sin 2 is getting your Abilities distribution correct. It’s easy to get spread too thin, and often people make the mistake of not spreading points around enough. The bonuses you gain from Abilities in this game are somewhat different than the original, so it’s easy to see why people can get confused. Let’s take a look at what Abilities and Talents you need for a Elemental Champion.

Two-Handed not only increases our melee attack damage, but also our Critical Multiplier. This works extremely well for what we’re trying to do.

Elemental Champions take a little bit to get off the ground because they do need to spread some points around early on to get the needed Skills. In Act 1 they will need 2 points into Warfare, 1 point in Hydrosophist, 1 point in Geomancer and 2 points into Scoundrel. Some of these can be achieved via Armour and Jewelry, which should help, but once these points have been distributed Elemental Champions will need to start dumping all points they can into Two-Handed. In act 2 you’ll get Warfare to 3 and then continue to max Two-Handed and then proceed to dump points into Scoundrel to increase your Critical Multiplier. The idea here is that when you use Enrage you deal a shit ton of damage, with every attack!

Lone Wolf – This is the obvious Talent here, and what makes the Lone Wolf Build possible. Take this one whenever you are ready to make the jump to Lone Wolf.

Opportunist – As with all melee Builds, this one Talent drastically increases your damage output, so take this one immediately after Lone Wolf.

Executioner – This Talent is pretty much a must for Lone Wolf so take it as early as you can. If you’ve already taken Opportunist and Lone Wolf this will be near the end of Act 1.

Hothead – This Talent is listed here because really there aren’t too many other Talents that work well with this Build and having some extra Critical Chance and Accuracy don’t hurt (particularly the Accuracy in this case).

Battle Stomp – A great AoE with a Knockdown. You won’t be able to take advantage of the Knockdown in this Build, but the AoE is still very useful. Deals 90% damage to each target, which isn’t terrible.

Crippling Blow – Although you won’t be able to Cripple targets with this skill, it still deals 115% damage vs a basic attack. Add in that it hits enemies adjacent to your target and it is a no brainer.

Blitz Attack – A great gap closer and can often 1 shot two targets at once. Use after you’ve used Enrage for best results. Only deals 70% damage to each target though, so keep that in mind.

Whirlwind – A tremendous AoE that deals full damage to each target struck. Try to make sure you hit at least 3 targets when using this or save it for a moment when you can.

Phoenix Dive – If you aren’t already in range of an enemy or you can’t get to one with Blitz Attack, use this to get where you need to go. Also sets burning on targets with no Magic Armour on their turn.

Enrage – This skill makes this Build work, plain and simple. Elemental Champions are able to make use of this skill when other Builds like Battlemage and Elementalist cannot, because Mute does not affect Melee Skills.

Challenge – As of the Definitive Edition this Skill now only costs 0 AP, making it viable for this Build if you put 3 points into Warfare. Buffs Physical and Magic Armour in addition to increasing your damage by 20% for 2 turns.

Thick of the Fight – A great skill that buffs ANY type of damage for 2 turns dependent upon the number of enemies around you. Between this skill and Enrage you should be dealing punishing amounts of damage.

Onslaught – This skill does insane damage, especially after being Enraged. Deals 250% damage vs a single target, all but ensuring their death. Save this for the hardest targets in a fight to eliminate them quickly.

Armour of Frost – A great way to buff your Magical Armour for a few turns. You will need to do this from time to time, especially in mage-heavy fights. Only needs on point into Hydrosophist.

Fortify – Pretty much the same as above, except that you have much less Physical Armour than Magic, so you’ll absolutely need this if you aren’t buffed by a teammate. Be sure to use this turn 1.

Venom Coating – A good way to add some decent damage to your attacks for 1 AP. Isn’t a must for this Build, but doesn’t hurt to have it just in case either. Use this turn 1.

Adrenaline – You’ll have points in Scoundrel anyway so why not take this very good utility skill. Use this when you need to a couple more AP to finish a deadly target. Try to avoid using when you know you’ll be Enraged the following turn.

Cloak and Dagger – Not truly needed for this Build, but can help with mobility if you find you are lacking. Only takes up 1 Memory slot and you’ll have points in Scoundrel anyway.

When approaching a battle it’s a good idea to save, if you can, just before and head in and then Inspect each enemy and then restart. This will give you an idea which Staff you should use for the upcoming fight and will allow you to have it equipped before entering combat when you reload. You can always change when combat starts, of course, but this will save you 1 AP. Keep in mind that Undead are immune to Poison damage so you’ll have to change Staves mid combat to kill them if you have one equipped. 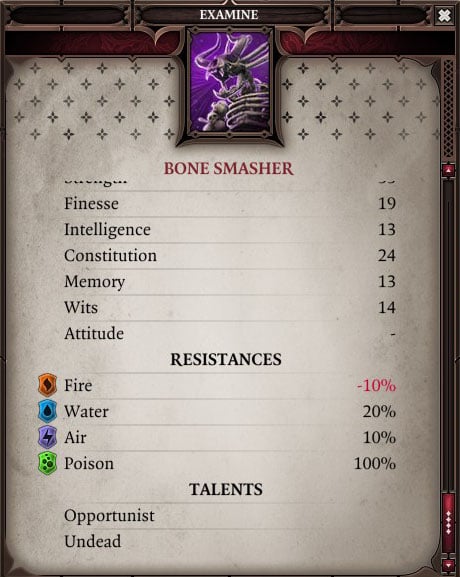 Inspecting targets will let you see just which type of damage you should be dealing. In this case Fire would work best and Poison would not be good at all.

Much like the Frost Paladin Build, I like to spend turn 1 buffing up. I usually cast Fortify, Armour of Frost, Venom Coating and any other buff you decided to go with like: Uncanny Evasion or Medusa Head. It’s a really good idea to leave 2 AP at the end of the turn if you can, but if you need to prioritize positioning so you don’t just get lit up by the enemy do so.

Turn 2 if there are no enemies in range of Blitz Attack or Battle Stomp I use Phoenix Dive to get in position and then use Enrage (if there are enemies already in range at the beginning of my turn I use Enrage straight away). This should allow you 6 AP to attack this turn, if you saved 2 AP from last turn, and then next turn you can get 6 AP to attack while Enraged again (or 8 if you use Adrenaline). This will help you maximize the effectiveness of Enrage. Note that later in the game, you will not need to use Enrage, as your Critical Chance will be well over 50% and it isn’t worth being Muted. 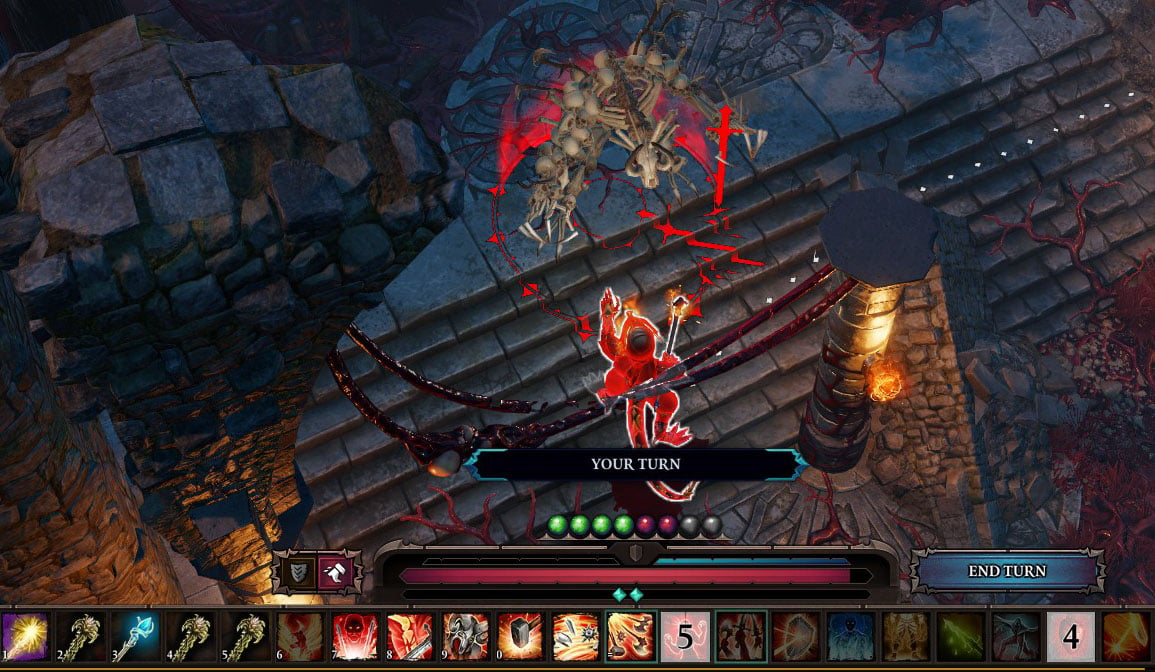 Nothing like being Enraged with 6 AP left in the turn and a whole turn after. 300% Critical Multiplier here we come!

Lastly, because you don’t have very many attack skills (6), and some do less damage than a normal attack, consider putting 3 points into Polymorph to unlock Skin Graft. This will allow you to refresh your Skills, including Enrage, which can really help you out if the fight doesn’t end quickly. This will also grant you access to Medusa Head, which Petrifies enemies near you with no Magic Armour.