Divinity: Original Sin 2 is in full swing, and one of the major issues players are having with the game is Builds. What Build do I use? What’s a good Build for a Warrior? Ranger? Mage? etc. Since the game is rather difficult this has come much more into focus than one would expect. In this Build Guide were going to cover the: Blood Mage. Let’s jump into this Build and see just how it works.

The Blood Mage is a Necromancer Build that relies on high Intelligence and Critical Chance to deal massive damage. Unlike other Mages, the Blood Mage deals Physical Damage, much like a Warrior or Ranger. Blood Mages typically have very good Armour and are extremely hard to kill because they can heal themselves and replenish their Armour (both Physical and Magical) as necessary. Blood Mages can deal extremely high damage with Grasp of the Starved or Blood Storm, but outside of these two Skills their damage isn’t particularly great, and thus they will be more of a Support type role earlier on in the game until they acquire these. 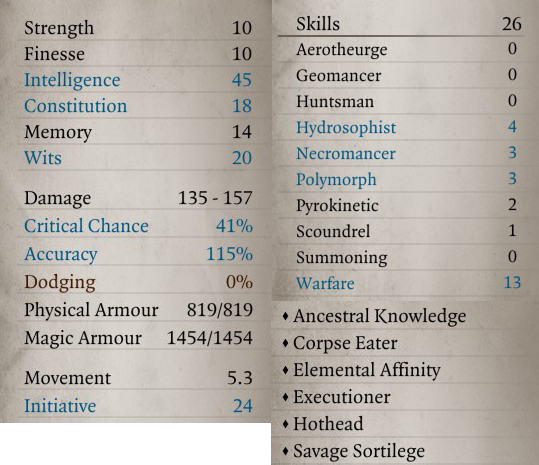 The Stats on my level 16 Blood Mage. It looks strange to have Warfare so high on Mage Build, but it is the most effective at increasing ALL of your Skills.

Blood Mages will focus primarily on Intelligence to increase the damage of a over half the Skills they use. Blood Mages can make better use of Critical Chance and Critical Multiplier than some other Builds. For this reason it is recommended that you put a few more points into Wits than you normally would with other Mage-type Builds as you get later on into the game. I would recommend a 3:1 ratio of Intelligence to Wits. Keep in mind this is not a Lone Wolf Build.

Blood Mages will use Intelligence-based Armour which works fine here, as they shouldn’t be in melee range unless they absolutely need to (this isn’t a Death Knight). Blood Mages will prioritize Armour with bonuses to Warfare since it increases the damage of all their Skills, followed by Intelligence, Critical Chance and Scoundrel (Scoundrel increases Critical Multiplier). This will help maximize the damage Blood Mages do. Also, they will want Flame Runes of Power in their Armour, and Necklace.

You can use either of these Runes in your Armour, but you want the Flame Rune in your Necklace for the increased Critical Chance. Shields should use Masterwork Runes for the increased Physical Armour, which also increases the damage of Bouncing Shield.

As far as Weapons go, you’ll want to use a Wand and Shield for maximum Armour. You shouldn’t ever need to attack with your Weapon, so we’ll take a Wand here just because you’ll have the correct Attributes for it and they generally give a bonus to Intelligence. Always pick the one with best bonuses, not damage. Shields will help keep you alive, and will allow you to replenish Armour on yourself. They also come with Rune Slots, which will allow you to increase the effectiveness of Bouncing Shield by slotting Masterwork Runes. Try to find a Shield with high Armour and 1 or 2 Rune Slots to maximize your damage.

One of the hardest parts about making a Build in Divinity: Original Sin 2 is getting your Abilities distribution correct. It’s easy to get spread too thin, and often people make the mistake of not spreading points around enough. The bonuses you gain from Abilities in this game are somewhat different than the original, so it’s easy to see why people can get confused. Let’s take a look at what Abilities and Talents you need for a Blood Mage.

In Act 1 Blood Mages will most likely have 2 points in Necromancer, 1 in Hydrosophist, 1 in Pyrokinetic and the rest in Warfare. Once you gain access to Source Points then you’ll want to bump these up to 3 points into Necromancer, 3 points into Hydropsophist, 2 points into Pyrokinetic and the rest should all go into Warfare. Any left over points should go into Scoundrel to increase Critical Multiplier. This will allow you to use the needed Skills for this Build and maximize your damage with them.

Elemental Affinity – This Talent works really well with this Build because Blood is not hard to produce. If you are an Elf, Flesh Sacrifice makes this a turn one thing, before you even cast a skill.

Executioner – This should be the second Talent you take because it works really well with this Build. Although it’s not as useful in a party as it is in Lone Wolf, it’s still better than a lot of Talents for this Build.

Savage Sortilege – This Talent is a must for this Build as it allows your spells to Critical Hit. However, you won’t need it right away because you won’t have much Critical Chance early on in the game. Take this around the beginning of Act 2 if you can.

Hothead – Another very good Talent for this Build since you shouldn’t take a whole lot of damage. Can really help you increase your Critical Damage.

Far Out Man – Will increase the range of many of your Skills by 2 meters. This Talent can help you reach your target when you otherwise might be just out of range.

Now that you’ve decided which Talents and Abilities you want, you’ll need to identify just which Skills work best with this kind of setup. Blood Mages will use primarily Necromancer Skills to deal damage. Since Builds evolve over the course of the game, I’m going to put the Skills in order from earliest obtainable to latest, because you won’t be able to get them all right way.

Blood Sucker – This is a great pick up early on as it’s a good cheap heal for 1 AP. Can also damage Decaying enemies. Combine it with Raining Blood to deal good damage or get a good heal.

Mosquito Swarm – Deals decent damage and sets the Bleeding Status Effect. Has very good range (13 meters) which is nice. Also heals you for a decent amount of Vitality, which is nice.

Decaying Touch – This skill has very limited range but can deal good damage and set decaying, which can prevent a target from healing. Not as useful early game as it is late game.

Raining Blood – A great way to help get use of Elemental Affinity if you need and also helps to ratchet up the damage of Grasp of the Starved. Can also set Bleeding, but deals no damage itself.

Shackles of Pain – This skill won’t deal any damage when first cast, but only costs 1 AP and will help you deal damage as you get hit. Be sure to use it after you have taken down your target’s Physical Armour or it won’t work.

Infect – Just like Mosquito Swarm, this skill does decent damage and has very good range. Can set Diseased on the target, which can then spread to others. Doesn’t happen often though.

Bone Cage – A great skill for buffing up your Armour and the more dead bodies around the better. Between this and Armour of Frost you should rarely take any damage.

Grasp of the Starved – This skill when properly used deals insane damage and will all but 1 shot most enemies in its AoE. Be sure to use in areas with lots of Blood or Clouds to maximize the damage.

Blood Storm – Might be the single deadliest skill in the game. For 4 AP and 3 SP you get a skill that deals insane damage to all targets in a huge AoE, sets Diseased and Decaying, then does it again for 2 more rounds. This is an instant win skill.

Bouncing Shield – This skill works really well with this Build because it doesn’t scale off of Strength, only Warfare, which you will have a lot of. You can also increase the damage by upgrading your Shield.

Deflective Barrier – A great skill for buffing your Physical Armour and also dealing some damage to enemies. I like to use this turn 1 or 2 of any engagement to get the best results.

Challenge – As of February 1st, 2018 this Skill now only costs 1 AP, making it viable for nearly every Warfare oriented Build. Buffs Physical and Magic Armour in addition to increasing your damage by 15% for 1 turn.

Corpse Explosion – Since the patch on October 26th, 2017 this skill now scales with Intelligence, and as a result this skill does exceptional damage for 1 AP.  Warfare also increases it’s damage, which is great.

Mass Corpse Explosion – This skill is hard to use effectively but when you can it deals devastating damage for 1 AP and 1 SP. Try to use when corpses are grouped on your target. Can one shot enemies if done right.

Armour of Frost – A good skill for buffing your Magic Armour, which you shouldn’t need to do often, but still helps. Can also be used on teammates, and only costs 1 AP.

Elves make the best Race for this build because Flesh Sacrifice creates a Blood puddle beneath you. This allows you to get great use of Elemental Affinity and also gain one AP and some damage for a turn (at the cost of Constitution). Be sure you move, if you need to, before using it so that you don’t waste it. Once moved, use Flesh Sacrifice before casting any other Necromancer Skills. Note: that you will lose Constitution when using Flesh Sacrifice and your Shield will be un-equipped if you don’t have enough to use it after the reduction, so be sure you have enough. 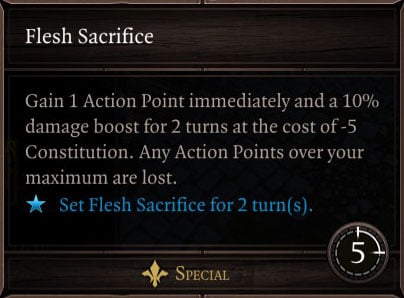 This Skill not only gives you 1 AP and 10% damage, but it puts a puddle of Blood beneath you that will reduce the cost of your Necromancer Skills by 1 if you have Elemental Affinity.

Corpse Explosion and Mass Corpse Explosion both deal tons of damage for 1 AP, which makes them really good additions to this Build. They can also hit multiple targets, and objects. You won’t be able to use these every battle effectively because of positioning, but when you can use them they perform really well. 2 points into Pyrokinetic to get them is definitely worth it, especially since you could get this on gear inadvertently anyhow.

Blood Mages have very few amazing Skills that don’t use Source, but the ones that do are EXTREMELY good! Grasp of the Starved can 1 shot just about any enemy inside its radius and Blood Storm will literally clear an entire battlefield if positioned properly. This makes Act 1 much harder for Blood Mages than Act 2 and onward, where they get Source Points. 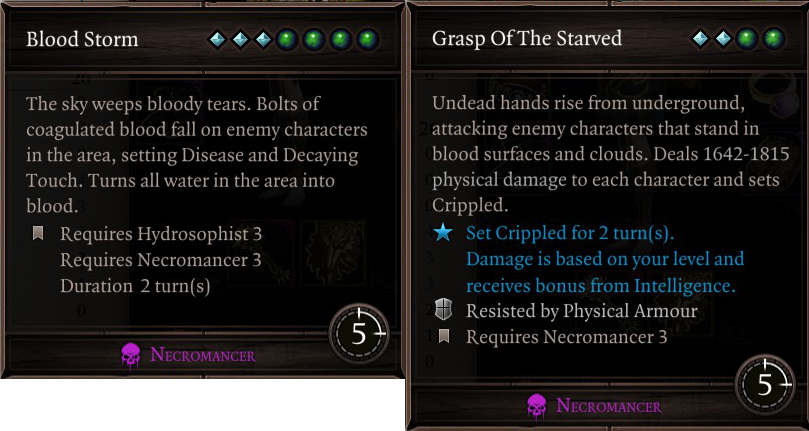 These two Skills turn a Blood Mage from mediocre at best to absolutely devastating. You can’t see the damage numbers on Blood Storm but it out performs Grasp of the Starved by double or triple.

Blood Mages deal crazy damage with these skills because there is no Resistance to Physical Damage like there is to the elements. This means when they strike they will always do 100% of the damage on the tooltip (and more if they Crit). I imagine these Skills will be nerfed in a future patch, but until then, enjoy!