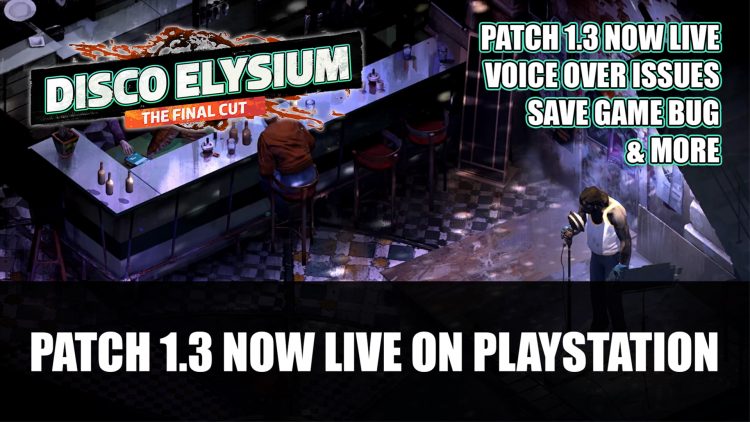 Developer ZA/UM has announced patch 1.3 for Disco Elysium: The Final Cut is now live, which fixes a number of bugs including save game and interaction errors.

ZA/UM earlier this week announced they were working on a patch update for the Playstation version of Disco Elysium: The Final Cut, in order to fix a few problems the console version has run into. This includes unfortunate save guns, controller issues in some places of the game and a number of voice-over problems.

They have now shared Patch 1.3 is now live, which addresses the following issues:

But the developer will not stop there, as work is underway for 1.4 as well. No roadmap has been shared on upcoming updates but it’s good news they rolled out some of these fixes already.

Patch 1.3 is now live on PlayStation! This fixes a myriad of bugs, soft locks, and interaction errors. We’re hard at work on 1.4. Thank you everyone. pic.twitter.com/wxBpEgBYKY

Disco Elysium: The Final Cut released on March 30th for PC and PS5, promising 4K with 60 FPS for the Playstation version. This edition also came with a free upgrade to those who already owned the game on PC. Final Cut added quests that didn’t make it into the original version of the game, and the major edition of voice acting.

Disco Elysium: The Final Cut is available on PC and Playstation 5. It will also be coming to Xbox Series X|S and Nintendo Switch in Summer 2021.

For more news find it here in Scarlet Nexus Gets Numerous Screenshots Including Costumes, Brain Map, Powers And More and Disco Elysium – The Final Cut Dev Assures Playstation Patch Is Being Worked On.