If you’ve never heard of Disco Elysium before, sadly you’re not alone. It’s an indie game developed and published by ZA/UM that if flying very much under the radar. In this review I’m not only going to tell you about the game, but why you should seriously consider picking it up this fall. It’s by no means a traditional RPG, and that is very much a good thing.

Disco Elysium takes place in a fictional universe during a time period that would be not unlike post World War II. A revolution has just taken place, and the factions of the world are very much separated and have their own agendas. Classism, Nationalism, Racism, and Sexism are all common place, and navigating these things can be challenging (and extremely hilarious as it turns out).

You play the role of an alcoholic policeman, waking up in your hotel room after a bender so bad you cannot recall who you are or why you are there. It turns out you are trying to solve a murder that has happened nearby, and despite your chemical dependency you are actually pretty decent at your job…when you want to be. 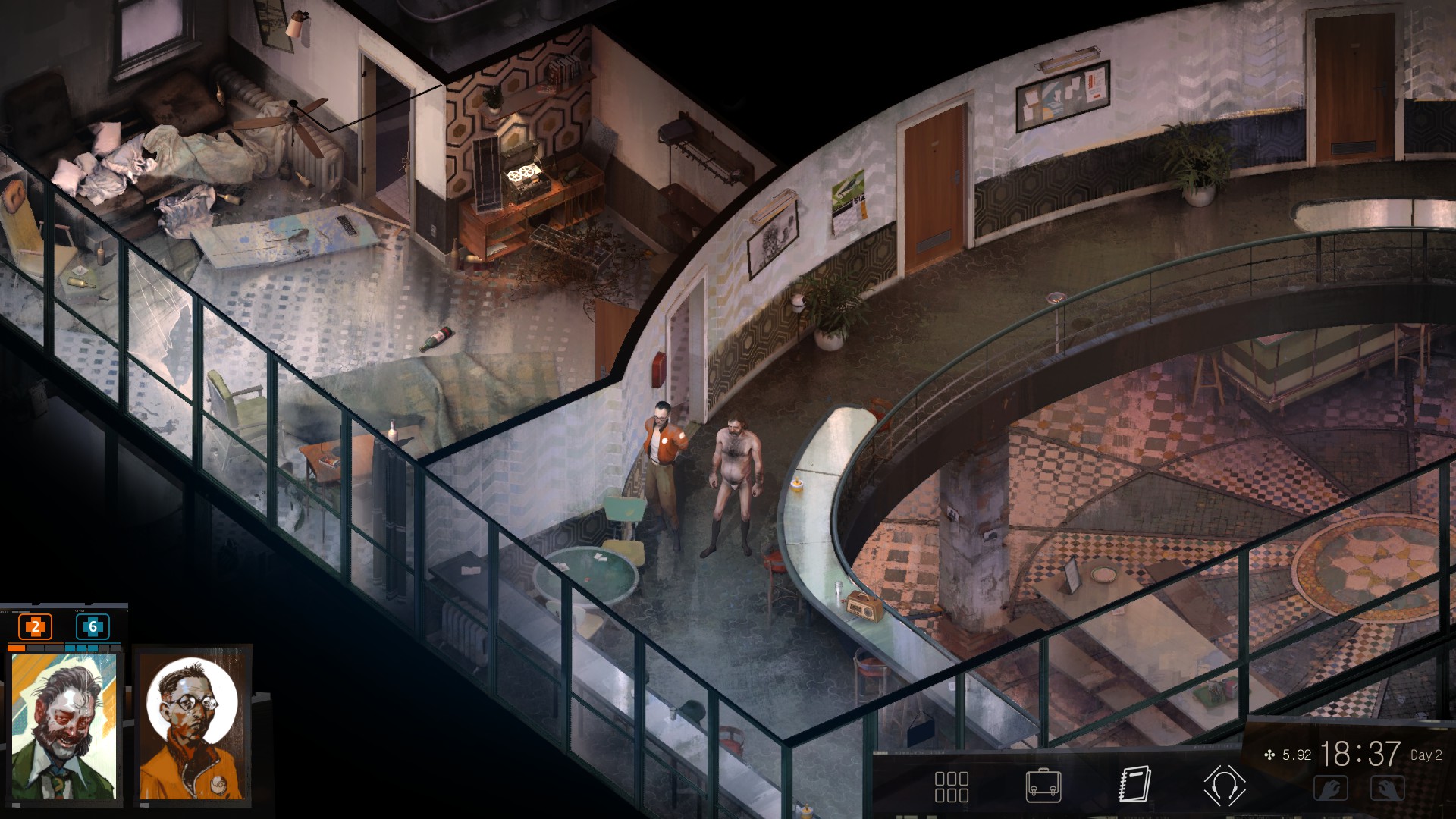 The game follows you around different areas of the war torn city of Marinaise as you try to get to the bottom of the gruesome lynching, and speak with people about the events that have taken place over the past couple of weeks leading up to the murder. Some of the things you learn are quite important, while others are just downright funny.

The common theme of Disco Elysium is taking modern day geopolitical issues, things that have become mainstays in just about every form of media there is, including gaming, and poking fun at them. It’s a game that takes something quite serious, a murder, and makes light of it and the events surrounding it until you can’t help but laugh. If you are looking for a “serious” RPG, this isn’t it.

The gameplay of Disco Elysium is extremely story driven and just about every meaningful interaction is handled in dialogue form. There is no real “gameplay” beyond exploring Martinaise, speaking to people and finding useful items that may come in handy in future dialogues. It reminds me very much of the Indiana Jones and the Fate of Atlantis or even Sam and Max games of old, just without much puzzle solving and far more cursing. Your dialogue choices may lead you to a breakthrough, but often they can lead to your death. Choose wisely!

Character progression comes in the form of improved Skills and Traits that the player selects to make up their character. Skills range from Logic and Rhetoric to Endurance and Empathy. All of your different skills work together to help you deduce just what is going on, and often give you dialogue options you would not otherwise have. And sometimes, you gain new characteristics from your interactions. 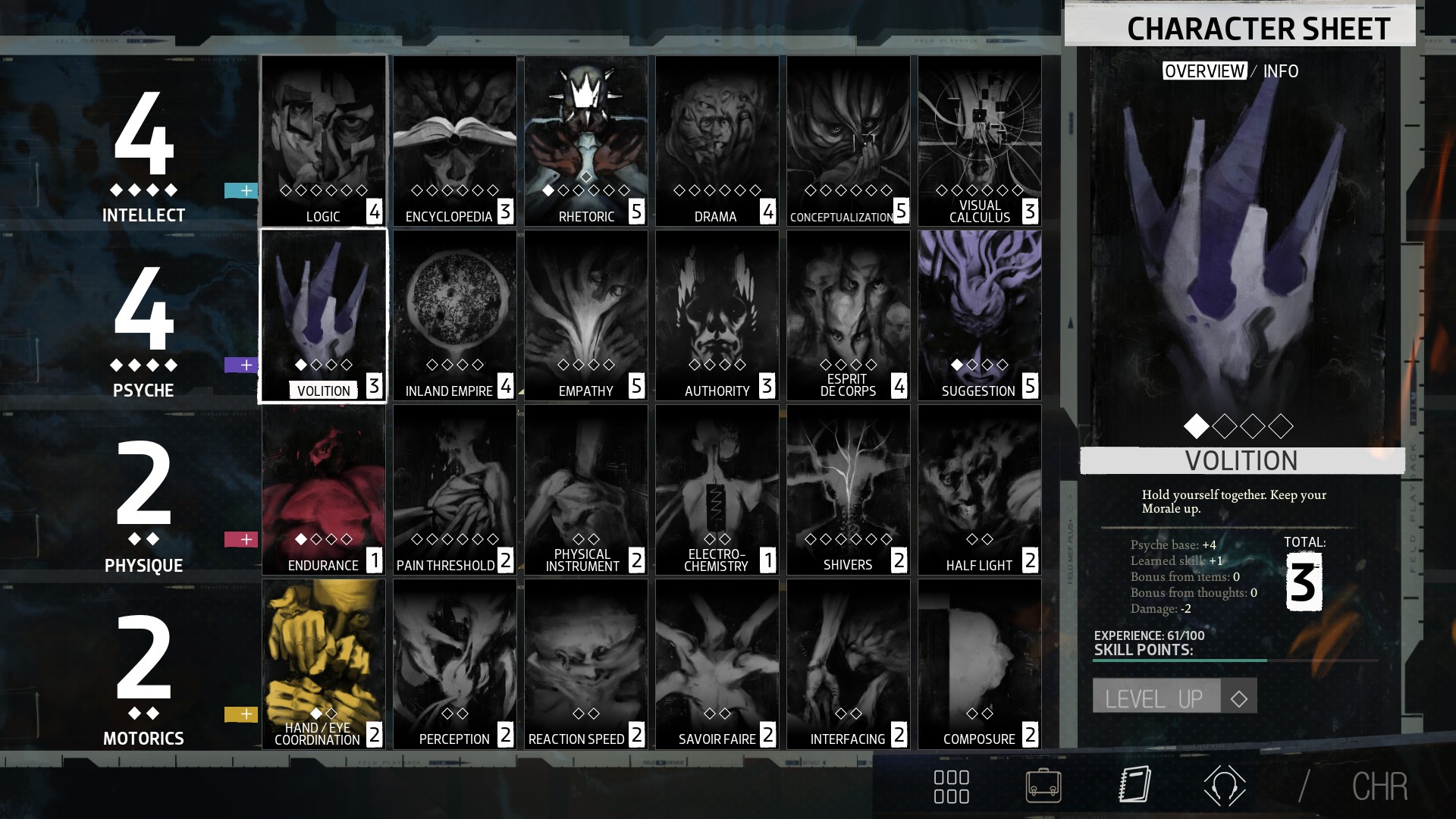 For instance, at one point my character failed a brute force skill check against a Semanese supremisist, which vaguely reminded me of a Samoan as he was quite large and have many tribal tattoos. The only option I had was to adopt his ideaology because of other decisions I had made previously in the game. All other options exhausted, I gave in and became one, and from that point forward many of my dialogue options included something a Semanese supremisist would say. While this might seem literally unplayable to some people, the manner of the responses to choose from is so over the top, you can’t help but laugh. I certainly didn’t expect to be playing a racial supremisist in an RPG, but what could I do? So, I just went with it…

There are many other Traits you can acquire, such as Hobocop, Inexplicable Feminist Agenda, Indirect Modes of Taxation, and of course Volumetric Shit Compressor. Often you will not see these things coming, and you find yourself in some precarious situations where you just do the best you can. How can an alcoholic detective with amnesia who is a feminist, communist, racial supremisist that begs everyone for change he sees possibly solve a murder? I don’t know, but it’s wildly entertaining to watch him try! 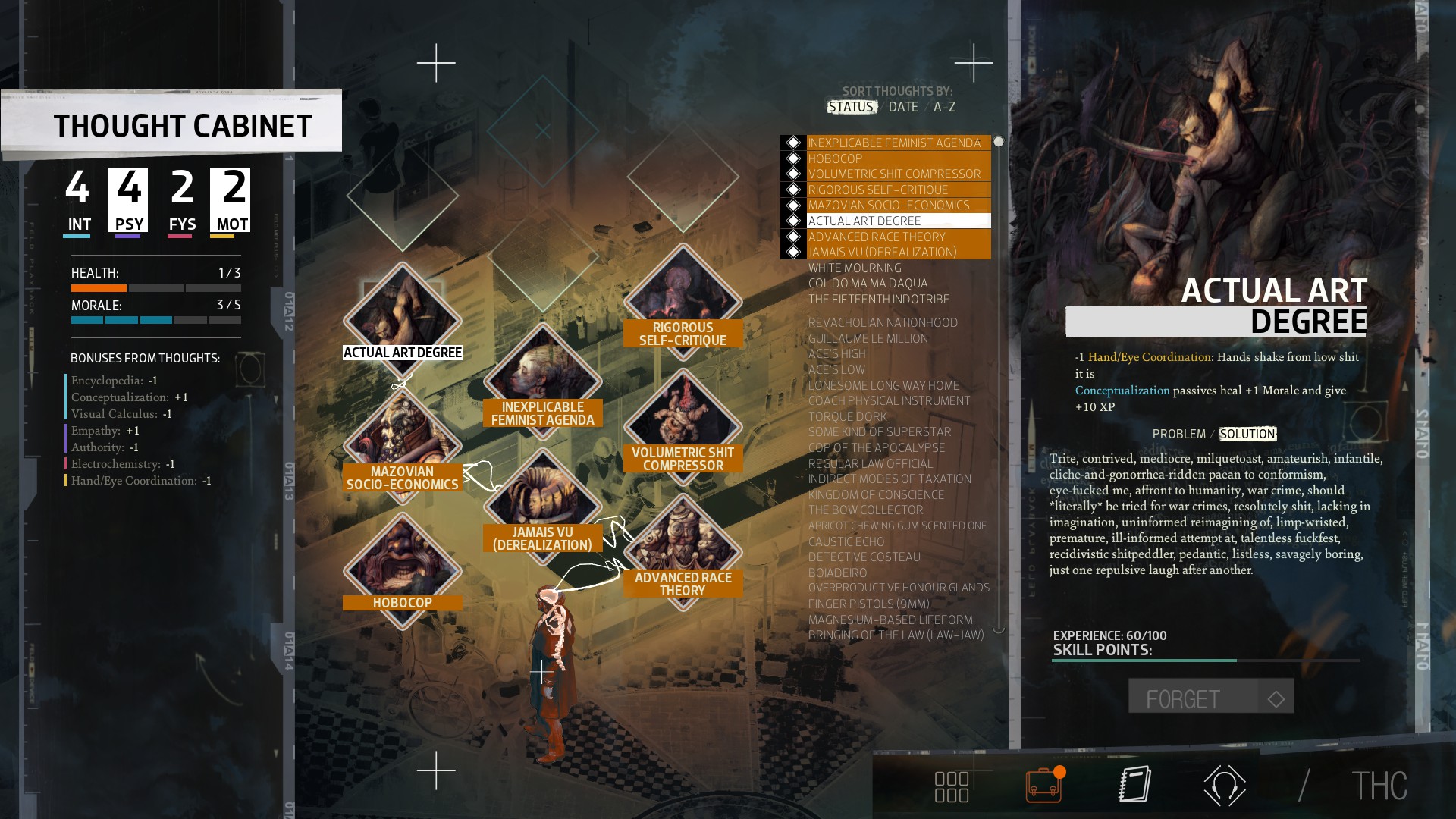 Disco Elysium features a very unique art style that is remeniscent of an oil painting. The people and landscapes are beautiful and fun to look at, and it is just generally fascinating to explore. There was a lot of care and detail here, and it really helps drive home the point that Disco Elysium is not your typical game, but something else entirely…something more.

Audio-wise the music fits the theme fairly well, but isn’t overly memorable. I think that was intentional, and I get the sense that it was just enough to give you something to listen to, but not take away from the dialogue, which is the star of the show. 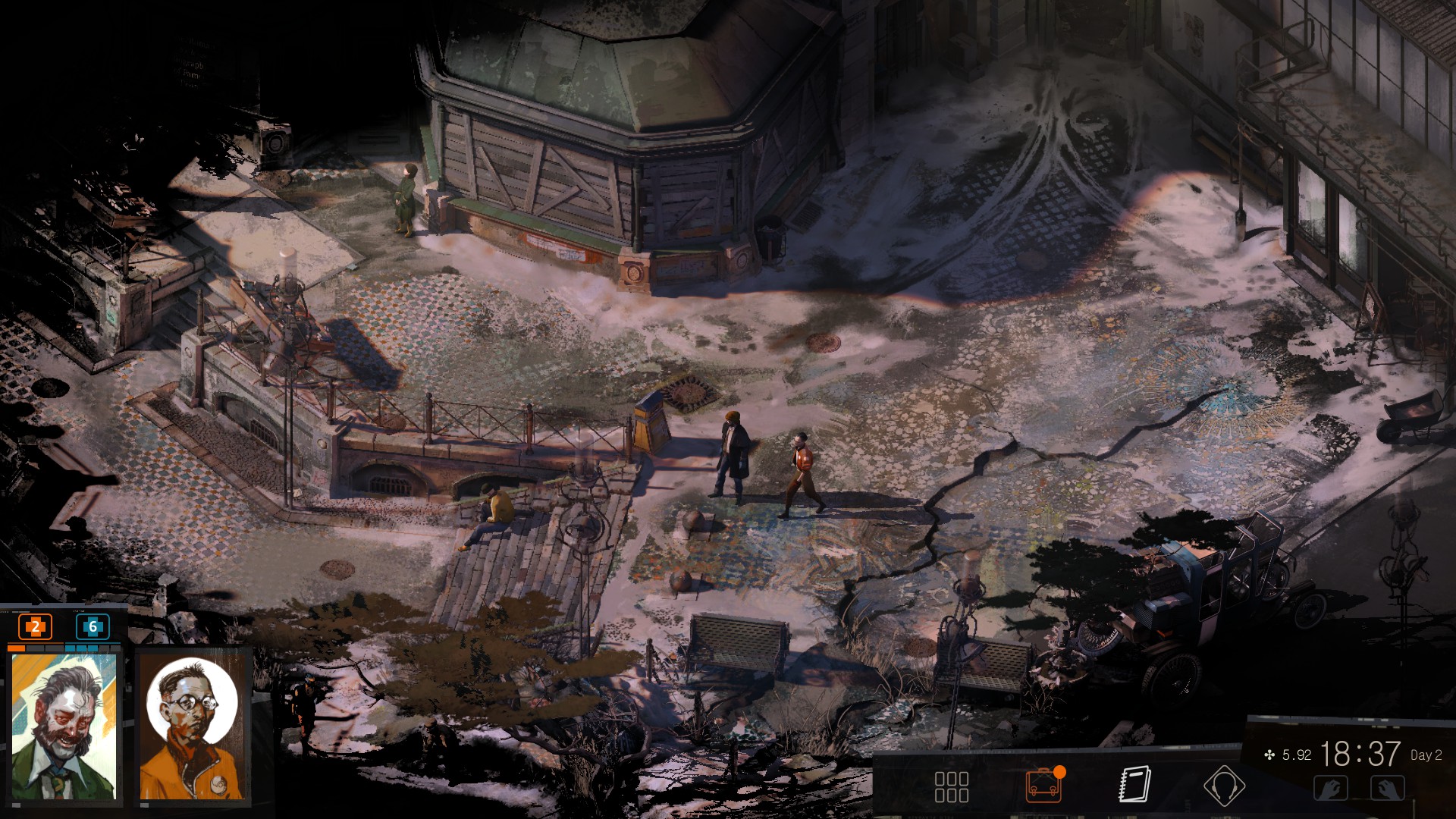 Many of the game’s lines are fully voice acted, but many are not. I’d say it’s somewhere around 40-50% if I had to guess, and I’d really have loved to see them all done. The voice acting is phenomenal, and it’s really disappointing to get half way through a conversation and the NPC suddenly doesn’t have any audio anymore. Please patch the game and do them all! They are great!

The replayability of the game comes in the form of the different outcomes and dialogue choices you can make based on the numerous Skills and characteristics you possess. You can get spectacularly varied playthroughs, though the main plot remains largely the same, simply by failing or succeeding in certain decisions. You’d have to play through the game several times to see what all is possible, and though I don’t anticipate many people doing that, I can see players giving it another go to see what happens. I know I will be. 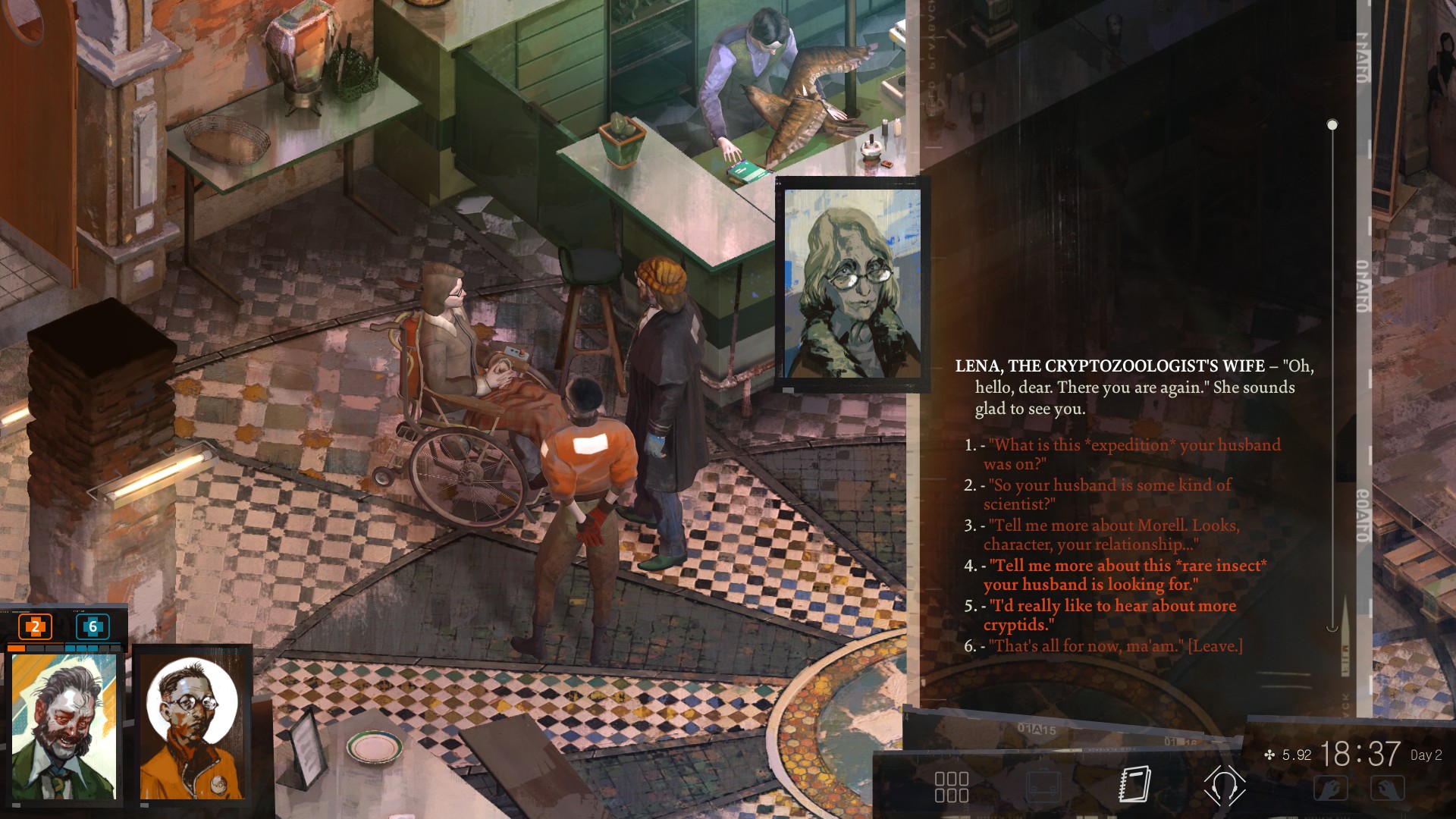 I’d heard good things about Disco Elysium before I tried it, and one of my friends (who works in the gaming industry) tried to explain to me why it may even be a game of the year contender. However, he really failed to capture in his explanation, just why the game was so good. It is extremely difficult to sum up in a few paragraphs, and I think the easiest way to understand Disco Elysium is to see it. So, instead of my usual summary, I’ll just leave you with some gameplay instead.

8.5
Summary: In a day and age where social and political issues are subtly weaved into the very fabric of nearly every form of entertainment, Disco Elysium takes them head on without a hint of shyness. Disco Elysium is certainly not a game for those that are faint of heart, but if you have a sense of humor, and you're looking for a breath of fresh air then Disco Elysium is a must buy game. If it doesn't make you laugh out loud a time or three, I'll ride the Cock Carousel.
Story and Setting (8.5)
Gameplay (8)
Audio and Visual (8.5)
Replayability (8.5)
Pricepoint (9)