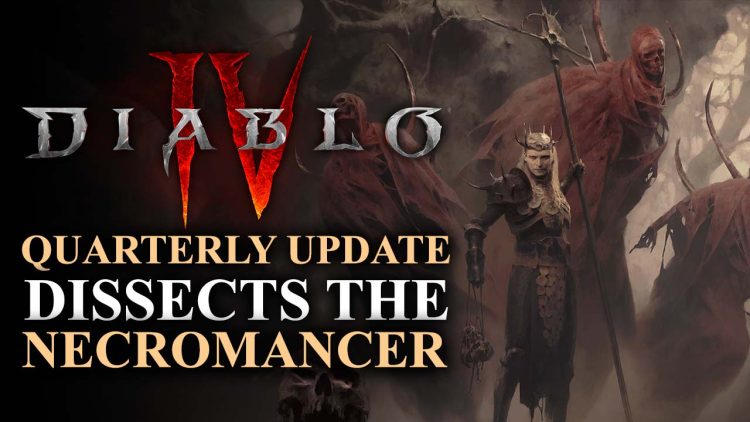 Diablo IV featured a closer look at the Necromancer in its June 2022 Quarterly Update. We got a chance to see some more skills and features of the class up close.

The Necromancer has proven to be one of Diablo’s most iconic classes ever since its inception in Diablo II. Summoning undead minions of bone, blood, and metal whilst poisoning their foes or impaling them with bones would make any macabre player squeal with delight.

It is a good thing then, that Blizzard announced that this fan favorite will make a return in the upcoming Diablo IV. A full cinematic trailer introduced the priests of Rathma will once again walk the fine line between life and death.

In case you missed it you can take a look at our Diablo 4 Gameplay Beta, video featuring the Necromancer class which can be found above.

Necromancers in Diablo IV will be able to make use of Swords, Daggers, Wands, Focuses, and Shields as their primary weapons. Unique to the class, however, is that they are the only ones who can make use of the two-handed scythe weapon.

We will also see the return of some of the most popular skills of previous Necromancers. Iron Golem and Skeletons will make the return as summonable minions. We can also expect to see Curses such as Iron Maiden and Decrepify. And who can forget the almighty Corpse Explosion?

Diablo IV’s Necromancer will be more like its iteration in Diablo III rather than Diablo II. They will have two unique resources at their disposal: Essence and Corpses.

Like in Diablo III, Essence is what will fuel all of the Necromancer’s more potent skills. It slowly regenerates over time like Mana or Arcane Power. However, this process can be sped up as certain Skills will be able to restore Essence. 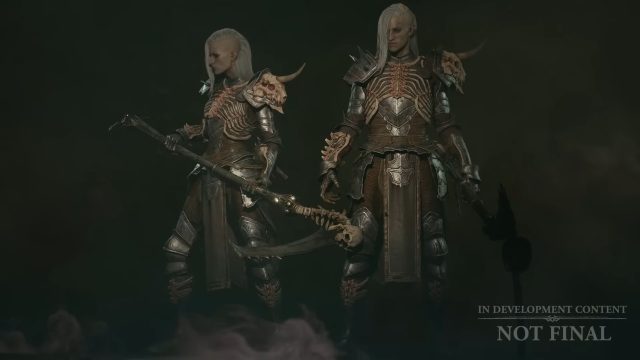 The Necromancer’s second unique resource will be Corpses. Basically, the remains of Enemies will linger on the battlefield much longer than usual when a Necromancer’s around. Their bloodied bodies will have a soft red mist emanating from them to signify that they are ripe for the Necromancer’s rituals.

A Corpse will be primarily used for summing a variety of skeletal minions. It can also be used for more powerful abilities, like Corpse Explosion. 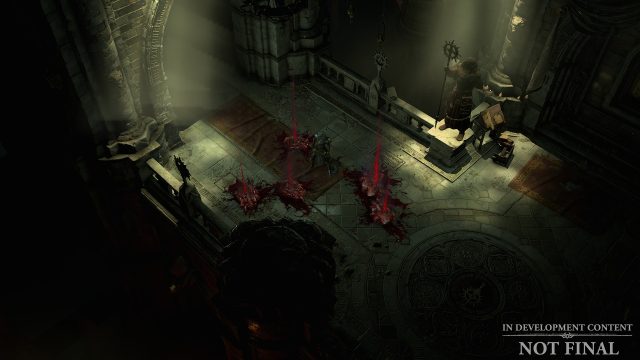 Corpses can also be created by various spell effects when fresh bodies aren’t available to be ravaged. This is to avoid the all-too-familiar scenarios wherein pure summoning Necromancers in Diablo II were helpless when starting a new run in high difficulties. The lack of a minion made fresh runs quite harsh due to needing readily available corpses.

The Diablo IV Necromancer will have their skills broken up into four distinct types of playstyles. These will be Bone, Darkness, Blood, and the Army. Each of them will be extremely different in terms of visuals and effects, but will all still tie in well with the Necromancer’s overall theme.

Bone spells will be primarily focused on dealing physical damage as bones are material objects. As such, Bone Spells will benefit the most from critical damage-enhancing effects. This playstyle will thrive on Necromancers who invest in building up their pool of Essence. 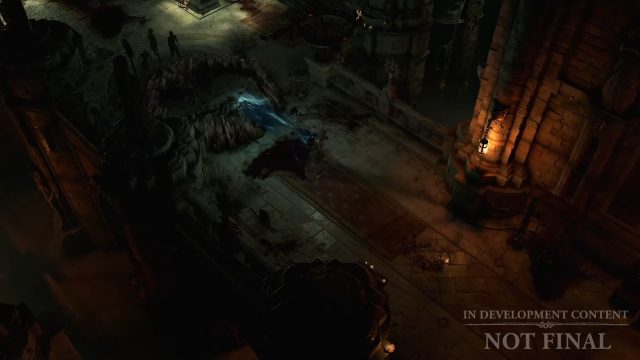 One of the more prominent spells makes a return in Diablo IV, Bone Prison. Another fan favorite, Bone Prison creates an impassable ring of bone, trapping enemies within. Instead of ensnaring single enemies at a time like in Diablo II, this version of Prison will now create a large circular wall that can entrap multiple targets.

The new and improved Bone Prison is best used when combined with other skills that create damaging effects on the ground, in preparation for large AoEs, blocking off paths, or ensnaring enemies with your minions.

The Necromancer’s Darkness tree can be somewhat compared to Word of Warcraft’s Warlock class. It prospers by making use of damage over time effects, debuffs, and heavy crowd control. This playstyle is best suited for players that enjoy causing their enemies to die of a “slow, painful death”. For all intents and purposes, Darkness seems to replace Poison Spells from other iterations of the Necromancer with a bit of CC. 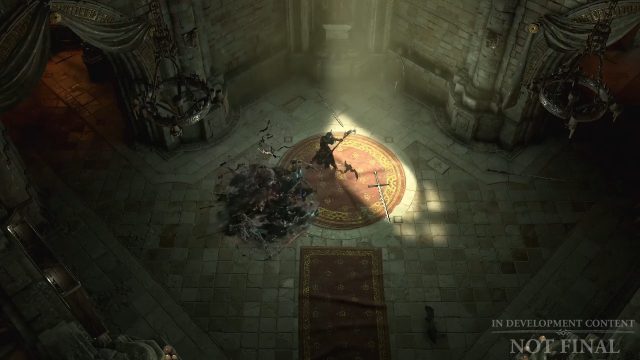 Blight is one of the notable Darkness abilities that was showcased. This projectile is basically a concentrated ball of evil magic that floats toward enemies. Once it connects, the spell will leave behind blighted ground that will deal continuous damage to anything that walks through it. Best used when enemies’ movement is hindered like while inside a Bone Prison.

Blood Spells steal life from enemies, restoring your own vitality in the process. These abilities will have both defensive and offensive options available to them. Necromancers who use blood spells will be strongest when they have high maximum health pools. 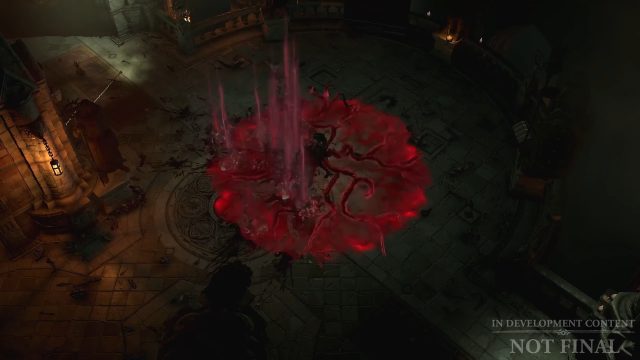 Poison Nova is essentially being replaced by the new Blood Surge. This spell absorbs the blood from nearby targets and gains strength. After a short delay, a nova of blood explodes outwards from the caster, dealing continuous damage. This damage is made stronger for each foe who got essence stolen.

Since Blood Surge is strongest when it can absorb a lot of energy, it is best used when in the thick of combat.

The Necromancer’s signature spell line has always been related to summoning. Army abilities are no different. This Necromancer will primarily focus on raising a variety of skeletons from the dead and constructing golems. Sadly, Revive will not make a return, it seems.

Golems in particular look quite beastly as they are now gigantic constructs that limber behind their master. The Iron Golem specifically looks like a hideous amalgam of various discarded weapons, shields, and other metals. 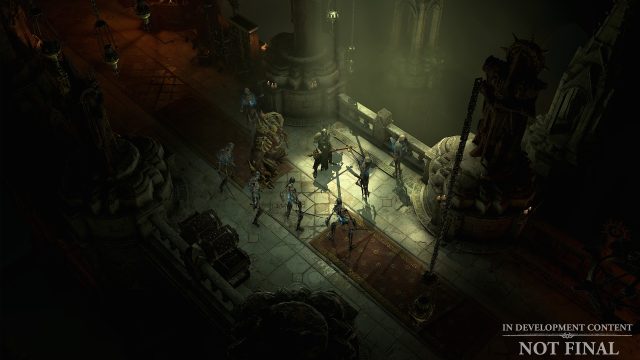 Unique to Diablo IV, however, is The Book of the Damned. This will be the summoner’s one-stop-shop for all things related to customizing summoning and the dark arts. The book will contain upgrades for Skeleton Warriors, Skeleton Mages, and Golems.

Even just the humble Skeleton Warrior can be specialized into one of three distinct forms: Skirmishers, Defenders, and Reapers. Skirmishers have increased damage at the expense of a smaller health pool. Defenders are much sturdier and are adept at tanking enemies and keeping them in place. Reapers are slow but have wide-reaching cleave attacks. 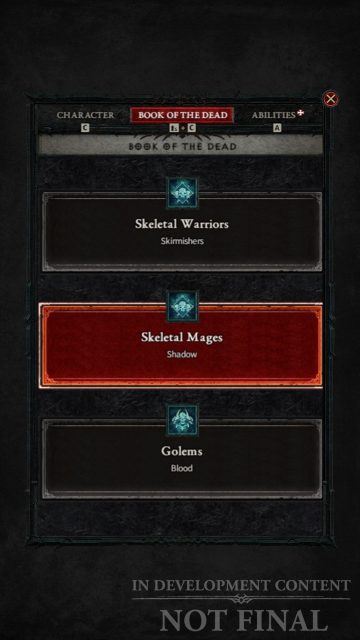 Book of the Damned

Going even deeper, each Summon will also have two distinct upgrades that can further diversify playstyles. Sacrifice is a new system that will remove a specific minion type from the pool of available summons in exchange for a powerful, permanent buff. Players can mix and match which types of minions to give up and which buff to keep.

The Cult of the Damned

The player’s choice seems to be quite the focus in Diablo IV, and the Necromancer’s available options further prove that point. Even things as basic as a Skeleton will have many options to further customize a player’s experience. No two Necromancers will ever truly be the same (unless they look up meta builds on Fextralife!)

For more info on the game, be sure to lurk in the Diablo IV Wiki. Catch up as well on how the game has evolved in the past few Quarterly Updates: March, December & October.

For more news, check out Capcom Showcase Announces Monster Hunter Rise Sunbreak Demo Plus Roadmap 2022 and Resident Evil 4 Showcase Gives Us a Closer Look at Leon and the Enigmatic Village.