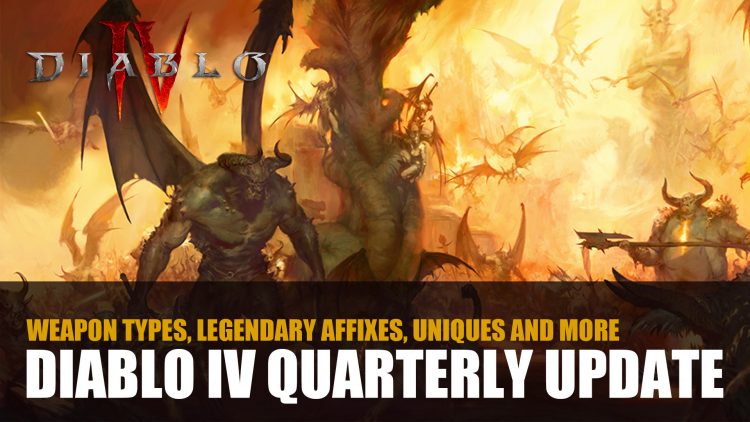 The Diablo 4 developer update this quarter is the last one this year, this time focusing on itemisation. This includes different types of Weapons, Legendary Affixes, Uniques and more.

One update which was made since the last quarterly Diablo IV coverage from Blizzard, is that players will be able to respec skills an unlimited amount of times, however this will cost you the more you character grows. By endgame, respec will be more costly, so choosing your build will have a heavier significance. 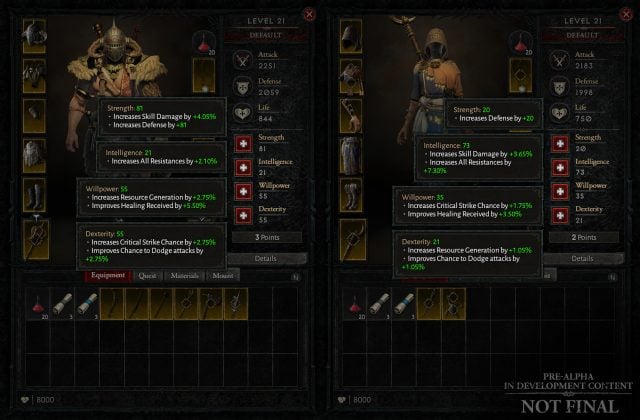 Diablo 4 will include some classic RPG elements to enhance the fantasy of the game. An example of this is for Barbarian, each time you level you will gain Strength, Intelligence, Dexterity or Willpower, for Barbarian the Strength stat will be particularly important, and matching both skills and attributes that will complement.

Of course you can use items to help supplement where your stats are lacking, but your stats will still greatly depend on where you spend your skill points.

Each Class skill tree will have additional effects once you fulfil specific primary stat thresholds, gaining a baseline effect of these nodes as you spend the skill points. Once unlocked, gain enough corresponding primary stats and the bonus effect will activate.

Each different Weapon type are distinct, and one addition Blizz has made is to include weapon speed for weapon info. The example given is for the wand Conjuration Omen, it has a “Very Fast Weapon” speed, while a staff like Arcane Embrace has a “Slow Weapon” speed. One-handed weapons have the faster attack speed, but two-handed weapons deal more damage. 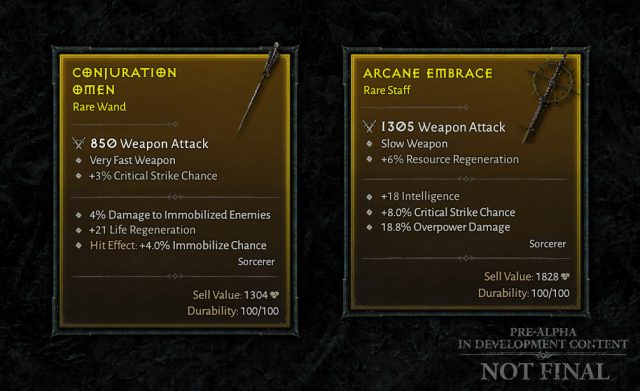 Weapons also have physical characteristics, the example given is for shields, where they have a block value, they can also have magical affixes attached. Physical properties are the same across weapon types and cannot be modified.

One major changes for Diablo 4 is for Item Qualities, Blizzard are increasing the potential power of individual affixes for Magic items. In endgame Rare and better items will have an increased maximum of affixes. While Legendary affixes will now roll randomly on Legendary Items. Replacing Mythics are Unique items. The idea is not to disregard other rarities completely, as Legendaries roll random Legendary affixes, you might find that an item of another rarity may hold a better affix or more suited towards your build.

The post explains Legendary items as Rare items but with one affix replaced with a legendary effect. These affix work akin to regular affixes and roll randomly. Many are not class specific, while some be specific to that class alone. They are not specific to particular slots either.

Uniques will have fixed affixes, follow a particular theme and possess class-specific powers, plus have a distinct look. 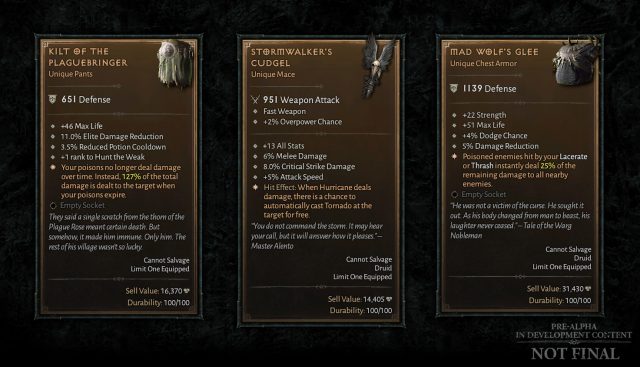 Mythics are out Diablo 4, due to the fact the developer doesn’t want players to completely disregard items of different qualities completely. This means you can still gain random legendary powers on an item.

In case you missed it you can catch up on the previous Diablo IV developer update here which concentrates on the Skill Tree, Talents and more.

If you want more Diablo IV be sure to drop by our Diablo IV wiki.

For more news be sure to read next Werewolf: The Apocalypse – Earthblood Gameplay Revealed and Cyberpunk 2077 Developer Offers Refunds To Consoles Players.