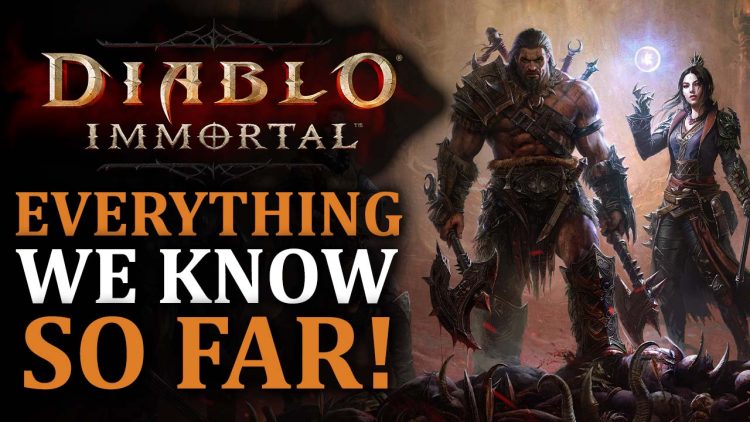 Diablo Immortal finally has a solid release date for mobile, with open beta for the PC version. Heroes will finally be able to revisit Sanctuary and rid it of evil starting on June 2, 2022.

Diablo Immortal: What We Know So Far on the Upcoming ARPG

Diablo Immortal’s open beta for PC starts on June 2, 2022 and will arrive alongside the launch on iOS and Android as well on the same day, in most regions worldwide. It will be released in late June in some Asia-Pacific regions instead. The game will be available on PC and mobile in Hong Kong, Indonesia, Macao, Malaysia, The Philippines, Singapore, Taiwan, and Thailand. Diablo Immortal will only be available on PC in Vietnam for now. Pre-registrations are currently available for Android/iOS.

Good thing it was also announced that Diablo Immortal will have cross-play and cross-save between Android, iOS, and Windows. Players can seamlessly pick up their game on mobile once they’re done slaying demons on the newly announced PC version and play with friends regardless of platform. Coming with controller as well as keyboard and mouse support with WASD controls for PC.

Fans of the beloved RPG should know that, despite its somewhat lukewarm reception, Diablo Immortal is shaping up to be quite a good title. We do know that director Wyatt Cheng is dedicated to creating a title worthy of carrying the Diablo name.

Today, we will discuss what rumblings we’ve heard on what goes on in Sanctuary. Here are a few reasons to be excited about this upcoming hack-and-slash RPG.

A Hint of Nostalgia

Nostalgia is definitely a powerful thing. It can invoke fond memories of many late nights of monster slaying. Remasters such as Diablo 2 Resurrected or Dark Souls Remastered are testaments that people love looking back. Good thing Diablo Immortal has just the right amount of nostalgia, but brings a brand new experience going mobile and being available on PC.

The Story So Far

Diablo Immortal bridges the gaps between Lord of Destruction and Diablo III. Baal, the big baddie of Diablo II has just corrupted the Worldstone, creating tons of problems for the population of Sanctuary, forcing Tyrael to shatter it. 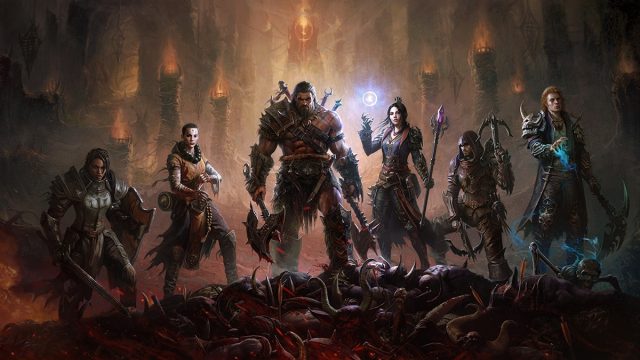 Scattered throughout the world, the shards of the Worldstone still pose a threat. Skarn, the Herald of Terror and one of Diablo’s lieutenants, intends to collect these and bring Diablo back to the land of mortals. It is up to us to stop him.

The locations and names alone are enough to bring back memories of the previous two games. Fans of Diablo II and Diablo III are definitely going to be able to reminisce. This is especially true as Diablo Immortal will let us encounter some recurring characters such as Deckard Cain, Charsi the Blacksmith, the Skeleton King, and The Countess.

We even get to interact with Xul, a prominent Necromancer created for Blizzard’s MOBA spinoff, Heroes of the Storm.

We will also get to revisit some locations post-Diablo II and pre-Diablo III. First and foremost, Diablo Immortal will let us finally explore Westmarch in all its glory. The city is bustling with trade and travelers. This will be the first time players can see the city in its grandeur, as Mathael laid siege to it in the Reaper of Souls expansion for Diablo III.

Other Diablo III locations we get to revisit are Wortham, the neighboring town of Tristram, and the Library of Zoltun Kulle. Diablo II veterans, on the other hand, will feel right at home in the Dark Wood. Some more prominent zones that players will have access to at launch will be the Ashwold Cemetery, Bilefen, the Shassar Sea, the Frozen Tundra, and Mount Zavain.

Diablo Immortal will have 6 distinct classes at launch, all of which are heavily inspired by their Diablo III counterparts. Just like Diablo III, players can choose to play as a male or female version of each class. Each class will have access to 2 Primary Skills, 12 Basics Skills, and an Ultimate.

At launch, players can choose between the Barbarian, Crusader, Demon Hunter, Monk, Necromancer, or Wizard. Sorry, Witch Doctor fans, you’re out of luck for the time being. 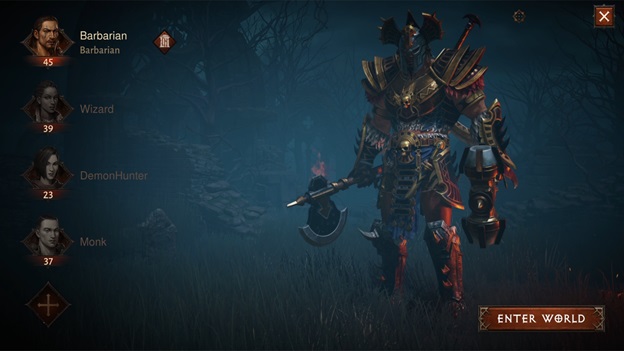 Masters of brutal melee combat, the Barbarians love charging in and cleaving through their foes. Some favorite skills making a comeback are Chained Spear, Hammer of the Ancients, Whirlwind, and Wrath of the Berserker. 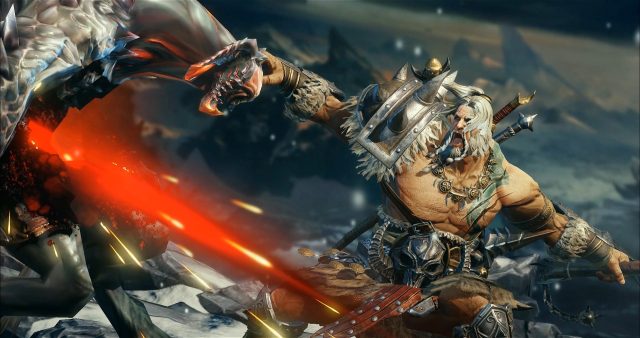 The holy Crusader in Diablo Immortal is an impenetrable living fortress that towers over her foes. Her faith and flail allow her to strike with fire and lightning, giving her access to Punish, Sweep Attack, Falling Sword, and Consecration. 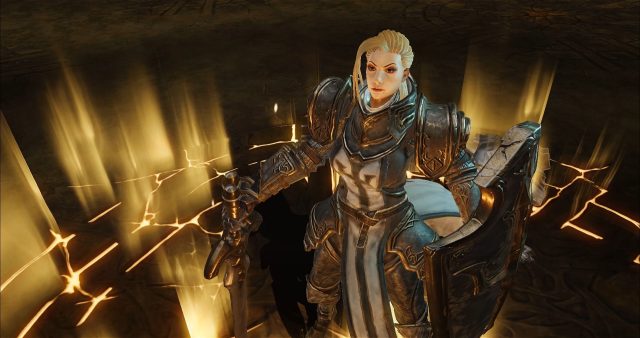 Hiding in the shadows and ready to pounce is the Demon Hunter. Agile and acrobatic, the Demon Hunter excels at pelting her foes with a variety of arrow shots. These include Explosive Arrow, Multishot, Rain of Vengeance, and Strafe. When in doubt, she can also make use of gadgets and trickery through the use of Sentry, or Smoke Screen. 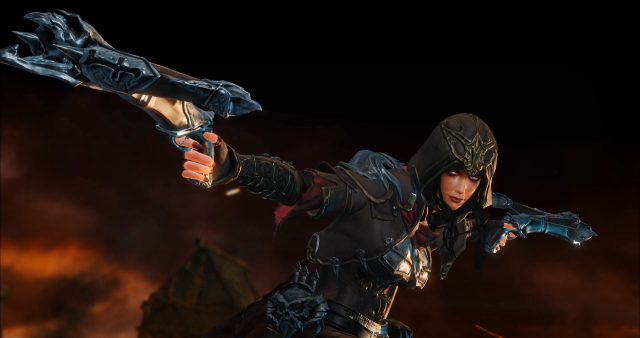 Diablo Immortal Monks are sacred masters of the martial arts. They excel in a multitude of kicks, strikes, and other magical powers. Fists of Thunder, Cyclone Strike, Flying Kick, Exploding Palm, and Wave of Light are just some of the attacks that the Monk can chain together with righteous fury. 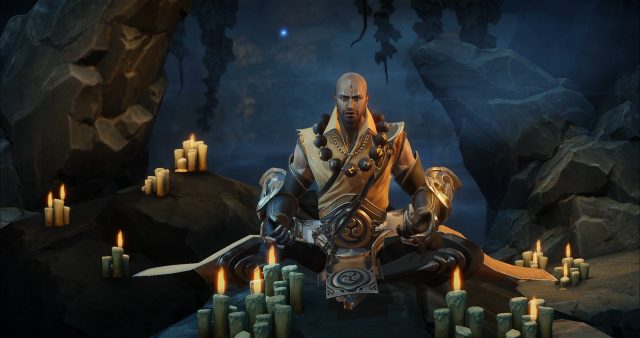 The Necromancer, one of the series’ favorite classes, are masters of blood, bone, and curses. As masters of the dark arts, they are able to manipulate life and death. Diablo Immortal Necromancers can unleash Soulfire, Corpse Lances, Bone Spikes, Bone Armor, and can Command Skeletons to do their bidding. 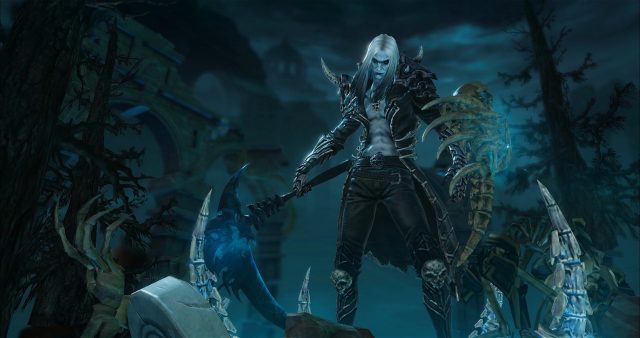 Last, but not least is the arcane Wizard. With a total disregard for the safety of others, the Wizard makes use of destructive magics unleashed upon her foes. Magic Missile, Lightning Nova, Scorch, Black Hole and Disintegrate are just some of the skills in her repertoire. To protect herself, the Wizard also has access to the powerful Teleport and chilling Ice Armor. 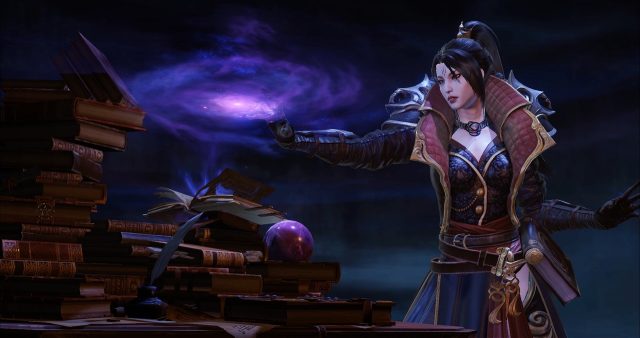 A Change of Class

Another cool feature that the Diablo Immortal team is implementing is allowing players to change their class. This is being added to let players experience different playstyles without feeling that they will lose too much progress.

Paragon Levels, one of the game’s endgame progression systems, will carry over to the new class a player selects. Players will also receive a new set of items for their new class to start off with. Legendary items will not be passed over, however.

The feature won’t be immediately available in Diablo Immortal’s launch. Blizzard hopes to have it in shortly right after in a content patch down the line.

Of course, Diablo Immortal wouldn’t be a successful ARPG without tons and tons of epic loot. With this, players will be able to fully deck out their heroes with gear, split up into 12 different equipment slots. This will be further divided into two categories: Primary and Secondary Equipment. 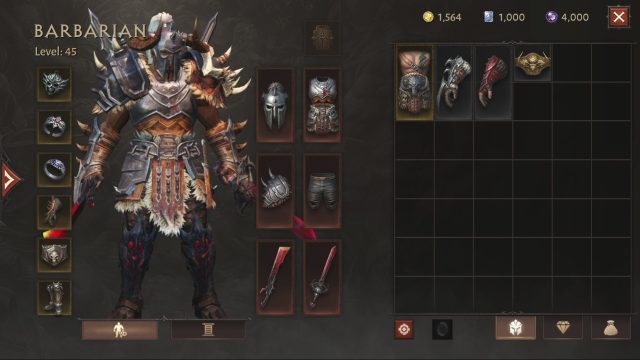 Much like Path of Exile, Legendary Quality items will be build-defining. These coveted items will have major modifications or enhancements to a character’s skills. For example, a skill can totally change the way it gets targetted, change its element entirely, or create more projectiles launched.

All equipment can be either Magic (Blue) or Rare (Yellow) quality, but the above restrictions apply to Set and Legendary Items.

Players will also be able to loot some precious gems in Diablo Immortal. Like in previous games, Gems can be socketed into items and will have many different effects on player stats. Gems can even be Legendary, and also drastically improve abilities. 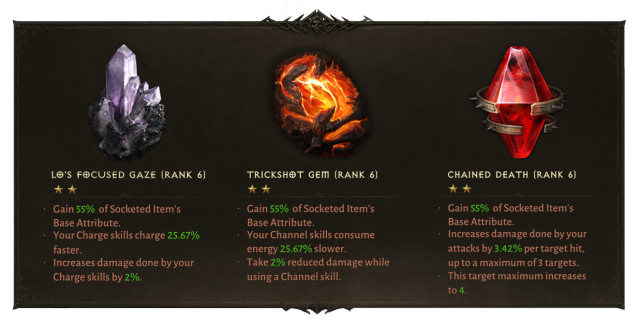 The higher the Resonance, the more unique visual effects start to appear on your character. This is a nifty way to make sure your hero stands out more in a crowd. 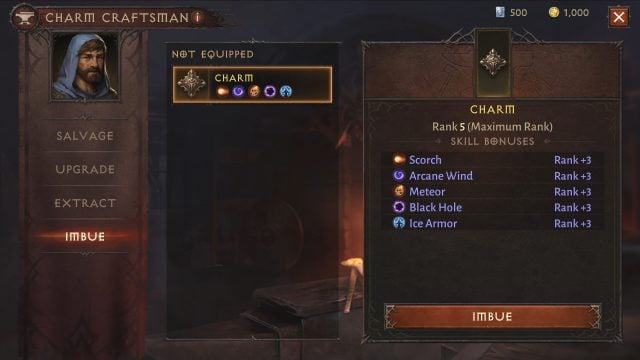 Charms can also be upgraded or broken down at the Charm Craftsman in Westmarch.

Once a character reaches the maximum level, all further Experience earned goes into the Paragon System. This endgame system allows characters to still progress in meaningful ways of the player’s choosing. Diablo Immortal’s Paragon System is a much more refined version of Diablo III’s. The predecessor’s enhancements were merely limited to small stat increases. 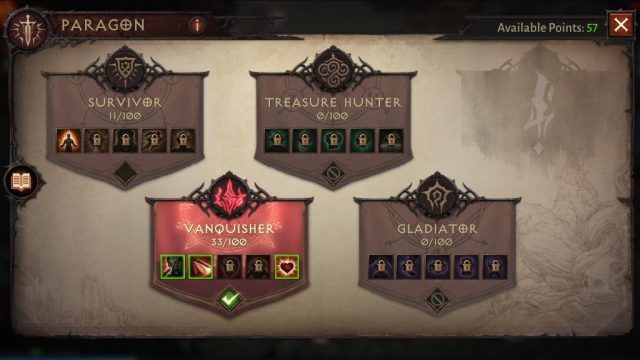 Diablo Immortal’s Paragon System, on the other hand, will feature 10 unique Paragon Trees. Each tree will have various kinds of buffs, ranging from simple stat increases to powerful passives. Four Paragon Trees have been revealed as of writing: Survivor, Treasure Hunter, Vanquisher, and Gladiator. 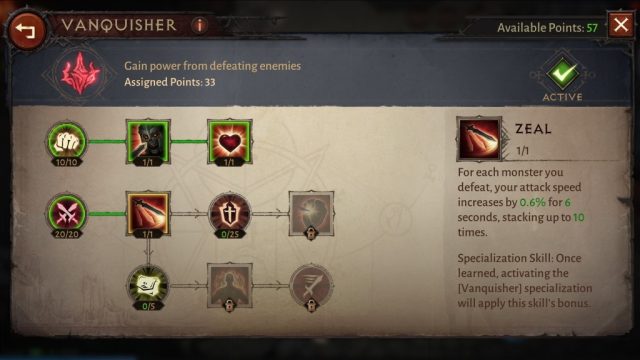 Max-level characters will also be able to participate in endgame Dungeons, Challenge Rifts, Elder Rifts, and the famous Helliquary raid.

The Tip of the Iceberg

We’ve barely scratched the surface on this upcoming ARPG. There are still many more systems and things that have yet to be revealed to the heroes of Sanctuary. Be sure to also check back for more news on Diablo Immortal here on Fextralife.

Be sure to also visit our Diablo Immortal Wiki for more information on the game.