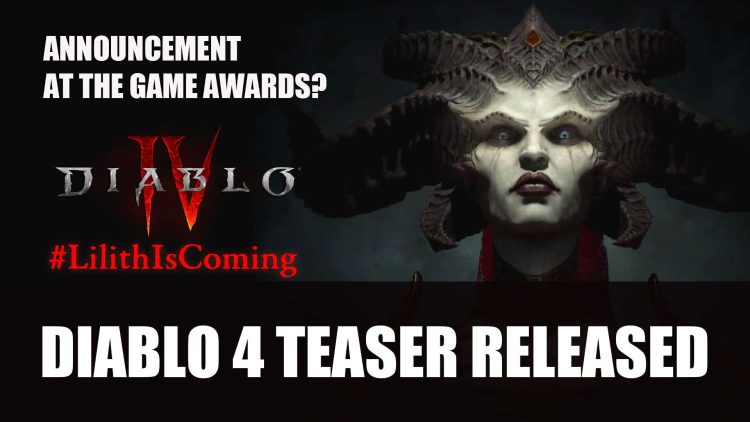 Blizzard has shared a small teaser for Diablo 4, which could indicate an announcement at The Game Awards this week.

Diablo 4 Teaser Could Mean An Announcement at The Game Awards

A quick teaser post on twitter has fans itching to know whether Diablo 4 will be getting some sort of announcement soon. The latest post simply shows a short clip of a chanting circle and then cuts to the hashtag “#LilithisComing”. The tweet even states to “be warned”. This could be the developer’s way of giving us a heads-up that something is heading our way soon.

Previously Blizz has been giving quarterly updates on the progress of Diablo 4. Last we saw more about world tiers, skill systems and more. Before that we got a closer look at character details, enemies and monster design. The aesthetics so far show incredible details looking enemies ranging from the Skeleton Lord to Succubus-type foes. Lilith is a prominent character in this entry, as the first game reveal introduced the “Queen of the Succubi”.

In case you missed it, Diablo 4 will be adding some changes to the usual Diablo formula, having an open world to explore split into five regions in Sanctuary. Players will be able to mount up to explore the map with some further customisation for mounts. The game will be online only, with a host of social activities in to take part in including public events and joining social hubs. For an excellent rundown of the game find it here in Everything We Know: Diablo 4.

Rumours have been swirling around Diablo 4 that the devs are getting closer to revealing the exact release date or an open beta in 2023. Closed endgame betas were discussed in September. As with all rumours it’s to be taken with a pinch of salt as there has been no official news from the Blizz as of yet. But the fact that they are teasing something, could mean we’re getting closer at least. Being this close to The Game Awards 2022 also seems quite coincidental. We’ll have to wait until the show to see if Lilith will be ready to make her appearance there.

If you want more Diablo IV be sure to drop by our Diablo IV wiki for all the latest info. In case you missed it you can find more details about the transmog system here as well learn more about the classes Barbarian, Sorceress, and Rogue.

For more news find it here in Lost Ark Unleashes The Summoner’s Fury This December and New World Winter Convergence Kicks Off Early This Year.