In this Diablo 4: Character Customization and Monster Design (June 2021 Quarterly Update), I’m going to discuss the level of graphic design and care that the Diablo Team has woven together to create highly customizable characters as well as the enemy design of visceral and vicious monsters.

Art is a very significant part of any game, especially in Diablo, because it makes combat feel real and impactful, from dark dungeons containing threatening and intimidating monsters to abilities that illustrate their sheer power through visual effects. All of these characteristics come together to create satisfying combat encounters which drives players to keep acquiring better-looking gear. Let’s begin with Character Customization in terms of what you can change in your character’s physical appearance.

With Diablo 4, the main goal is to retain the visual fidelity of how real characters and gear are while using the latest tools available. The developers didn’t intend to revisit the days when characters felt procedurally-generated or cinematics were pre-rendered like in Diablo 3. They wanted to push their capabilities to finally produce real-time visuals with player characters in it.

Additionally, these characters will be featured up close so you can appreciate the level of importance and detail they bring to the overall story of the game. As a result, they had to completely rebuild their engine and tools to fit their vision of incorporating hand-crafted art.

Each piece of Equipment now has greater details that clearly and realistically define what they are. Examples include the hair, fur, metal and even down to their respective highlights in relation to the environment, lighting, and camera angles. Most notably, the team focuses on bigger armor shapes to emphasize and to fit the character’s body types and the setting.

Diablo 4 has the most amount of customization compared to any of its predecessors so your characters look and feel different even if you select the same character Class. In general, you’ll be able to change your facial attributes that include but are not limited to your hairstyle, facial hair, and body markings.

What’s even more interesting is that certain customizations are class-specific in order to support who they are and their overall origins. Because of this, Rogues would look distinctly different from Barbarians and vice versa. This is the level of detail I’m excited to see because it shows how thorough the team is to deliver the most unique experience for each player. You basically create your own identity with the Class you choose and the customizations you make. 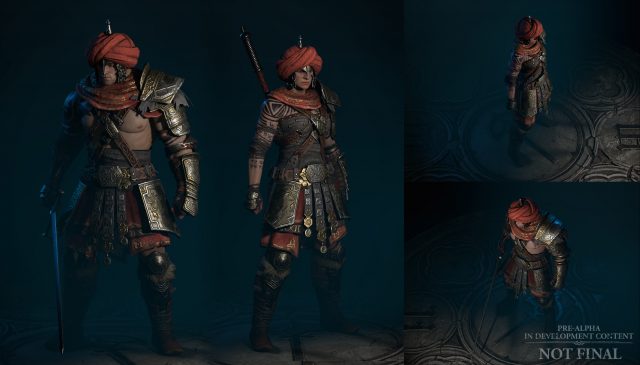 When it comes to every piece of gear, you’re able to change their respective colors by applying dyes. So Armor like gloves, pants and boots can all match each other depending on your preference. For example, if you’re wearing a red and gold scarf, you can dye your metal shoulder pad with an accent close to either of those colors. Moreover, you’ll have the option to apply a single palette to your entire Armor Set so you don’t have to worry about heavily customizing each part. 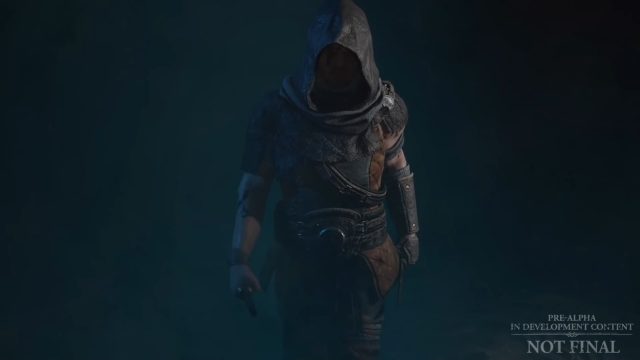 For the dye system, the Diablo Team has implemented Physically-Based Rendering or PBR in order for the colors to react accordingly to light in a realistic manner. So for instance, you can expect your character with their bulky armor, to cast a huge shadow in a dimly lit dungeon provided you have sufficient light in the area. 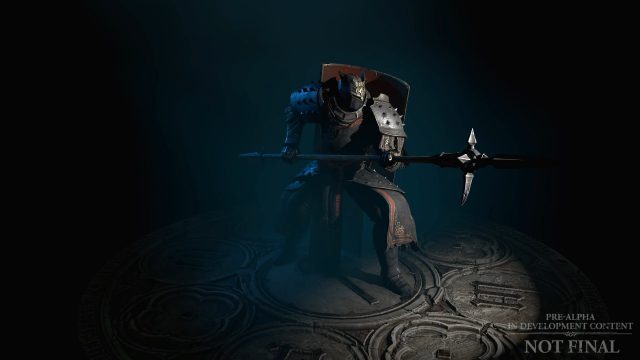 Another example is the Knight who has an intricately designed Armor made out of metal and cloth. The lighting brings out a lot of detail by casting shadows on the shoulder pad’s spikes. Metallic surfaces also believably reflect light as expected. PBR ensures that each character is portrayed correctly wherever they are in Sanctuary.

Given Diablo 4’s isometric view, the team wants characters and their gear to pop out. The reason for this is how integral and involved your character is in the world. So you’ll see them appear in social screens and definitely in cinematics, which further accentuates the degree of customization you’ve applied. To support this, they’ve added detail mapping or a type of “repetitive texture” in order to flesh out the sharpness of your character. 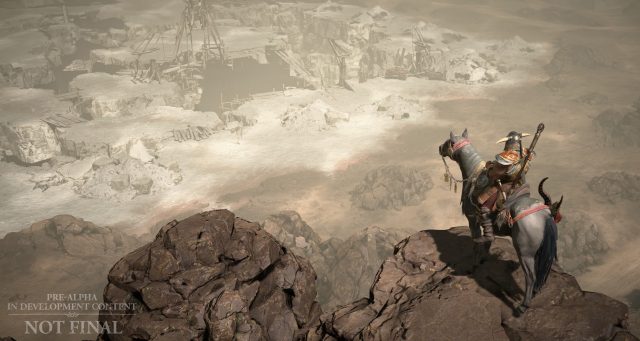 Also, remember that characters have two body types and as such, Armor Sets are adjusted depending on the body you select.

Similar to how characters are handled, monsters visually depict their core being and what they’re capable of doing. As a result, players feel the satisfaction of slaying them. The team is creating new and horrific monsters to simulate a dark environment similar to the foes we’ve seen in Diablo 1 and 2. 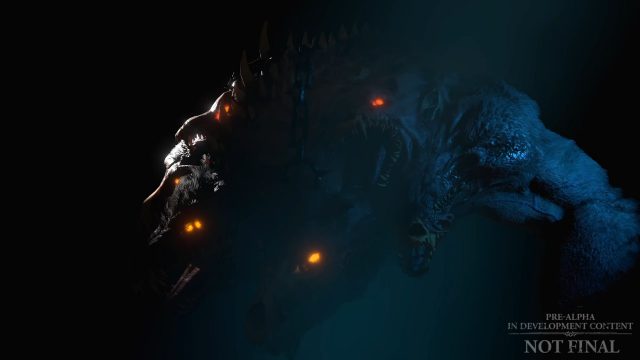 There is also the challenge of having a good balance in the artistic features of these monsters. Minute details should be visible to create unique, visually striking enemies while also having silhouettes that are immediately recognizable to players. Colors would also need to be represented and mixed well, such as in the case of the Spider. Additionally, details are optimized for good performance. And lastly, PBR is also used for monsters where their flesh and bones react to light accordingly.

In this quarterly update, the developers go into detail to discuss the monster design of the Blood Bishop, Skeleton Lord, Spider, and Succubus.

The Blood Bishop is a creature introduced in Diablo 4 that makes heavy use of blood magic. The team designed this boss with vampiric qualities in mind, and even created the back silhouette in the shape of a beating heart. Its heart, vessels and other arteries reinforce the notion that the Blood Bishop thrives on blood. 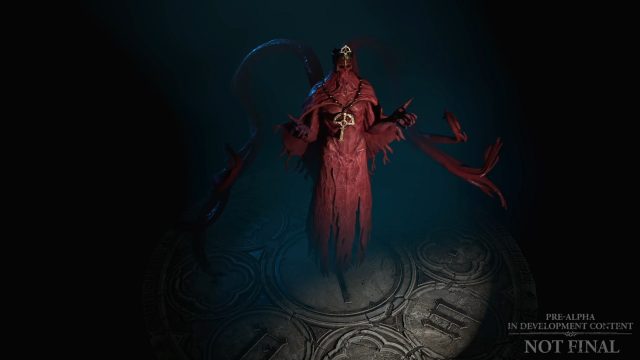 The creature model, along with the animations and effects built for him meet the visual design familiar to Diablo. This is an enemy who will make sure that the player will have a bloody good time. 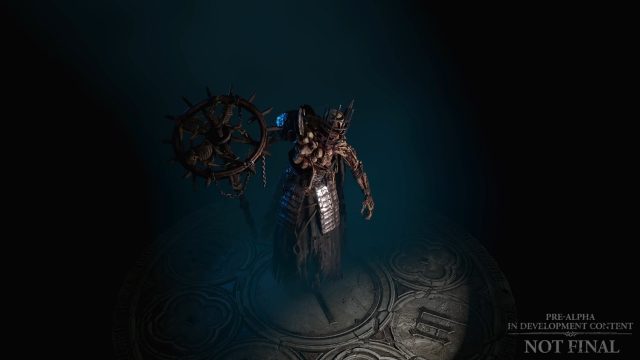 He utilizes bone walls and summoned skeletons, which are a staple of any skeletal encounter. What’s cool here is that the Skeleton Lord can hit the ground with his staff, pelting the area with exploding bone shards.

Diablo 4 The Spider and The Succubus

The Spider is a gruesome creature that attached itself to a bloated corpse and laid eggs there. The team takes great pride in the design of this monster since players will instantly recognize it as a giant spider with an unfortunate victim. The spider’s bright red shade is a good contrast to the muted tones of the bloated corpse, making this creature stand out, thereby catching the player’s attention. Long legs, along with its horrible spider eggs make this enemy uncomfortable to look at. 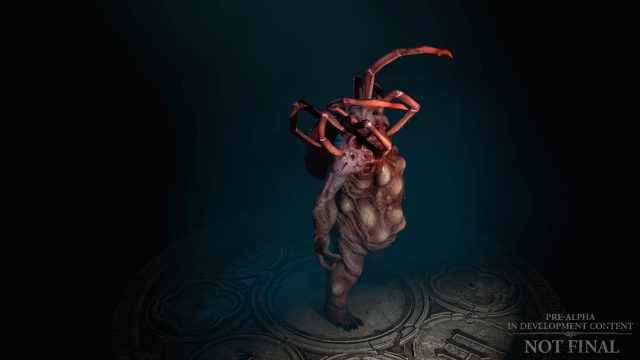 Meanwhile, the Succubus is a winged creature in scraps of clothing who is ready to pounce at her victims. What’s more disturbing is how her horns are actually demonic arms with wings that add to the horror of who she is. Succubus take advantage of distance to cast magical spells from a safer position. 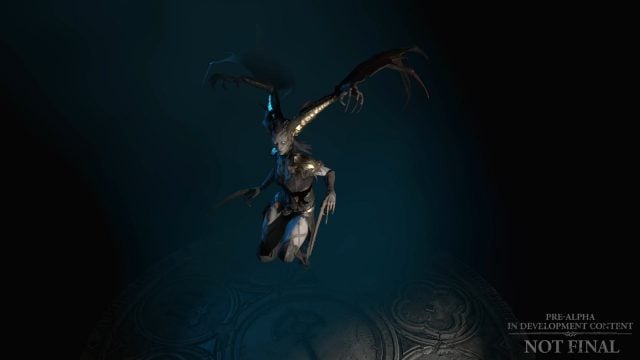 I’m definitely looking forward to how these monsters are brought out to terrorize Sanctuary.  Going through these art designs elicit different emotional responses from fear, to disgust, and even excitement at the thought of killing these grotesque creatures.

The Diablo 4 June 2021 Quarterly Update is a great avenue to share intricate details and thought processes on how the developers have been designing both characters and monsters with great care.

Lastly, the next update will focus on Diablo 4’s sound design as well as the end game implementation. I’m particularly excited for how the end game will work. Will it be totally random like Diablo 3’s Greater Rift System, or will it be like Path of Exile’s Atlas/Map System?

Stay tuned for more Diablo 4 content and be sure to check out our Diablo 4 Wiki and Twitch Channel if you have any questions on the game. What updates would you like to see next? What did you think of this Diablo 4 June 2021 Quarterly Update? Let us know in the comments section below!