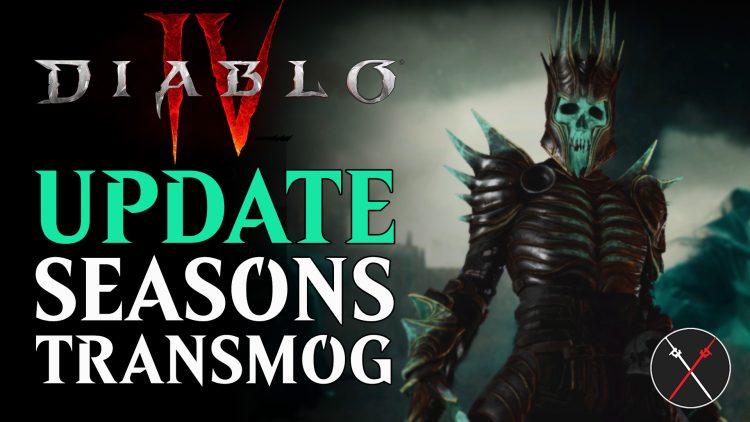 The impact of seasons in Action RPGs and MMORPGs cannot be denied as they bring value in terms of introducing fresh systems to continually capture the community’s interests. More often than not, these add variety and quality-of-life changes to enhance their experiences and to keep them coming back for new and better content. Let us start with how Seasons will be brought to life in Diablo IV.

As part of making seasons work better in Diablo IV, Blizzard has decided to build a dedicated team of developers with the intention of introducing constant and valuable changes to improve player experience. After the launch of this Action RPG, the wait time for the first Season will not be too long, however, no timeframe has been revealed thus far. Whether it will be available in the first or second month of the full game’s release is anyone’s guess.

There will be a total of 4 seasons per year in which new features and gameplay mechanics will be introduced, including but not limited to Quests, legendary Items, and monsters. What makes this interesting compared to the season design philosophy of Diablo III is the introduction of new questlines where you will uncover the secrets of Sanctuary by meeting new and old characters alike. So there will probably be associated challenges, which will serve as the fully fleshed out version of Diablo III’s Themes, rather than simply rotating a pool of rewards from earlier seasons. 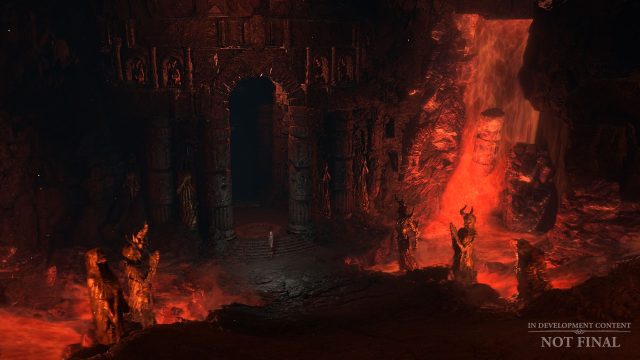 With new quests added into the mix, this brings in a certain question for players who will be joining midway into the current season or the one that will come after it. Perhaps there is going to be a big compressed quest, which will allow them to catch up on the story so they won’t have to experience the entire thing at a slower pace, much like Lost Ark’s Power Pass structure? How this mechanic will work has yet to be addressed by Blizzard.

By the sound of it, seasons will appear to follow an expansion format due to how massive the upgraded content sounds similar to Path of Exile’s Temporary Leagues. Will it be as big as Leagues? Will the questlines be divided into multiple acts with different areas? Basically, the goal is to introduce content that significantly shifts your experience of Diablo IV within the first hour of playtime. This is a great way of getting you immediately invested instead of feeling the powers of your characters only at max level like in Diablo III. 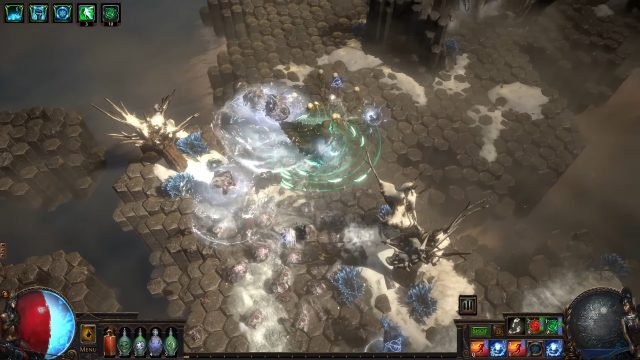 At the end of every season, the characters you have created together with their gear will be moved to the Eternal Realm. This means that progression is retained, allowing you to continue playing that same set of characters but outside of the current season. Meanwhile, at the start of every season, you will be choosing your new Class to create multiple Builds and experiment with a variety of items in order to experience newly introduced features. 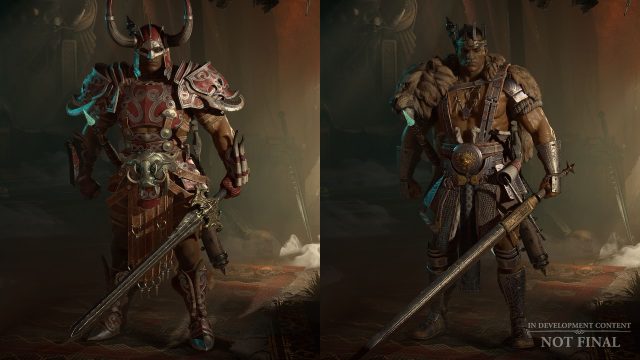 Having this gameplay loop where content is essentially refreshed after every quarter lets everyone be a part of the evolution of Sanctuary, especially those who were not able to participate as much in the previous seasons. Now as you level up, you will notice that power progression is based on how well you theorycraft and apply these changes to push your characters to the limit.

It will be about the time and skill you put in as well as allocating the right amount of paragon points accordingly, which will be capped to avoid overpowered builds. Paying your way to the top is not going to be possible either. Legendary items and the most powerful Equipment will be character-bound so you cannot purchase these from other players as well.

Given the significant improvements that are being implemented for Diablo IV, one of the things I am excited to see is the live events in terms of how they will bring Sanctuary to life. Sanctuary is known to house a variety of factions pining for domination so the anticipation and excitement of being caught in the middle of conflicts are ever-present. There are several questions in play here as to how it will be implemented.

Will it be as earth-shattering as the World Boss Events in Guild Wars 2 that can alter the lore? Or will these live events be smaller in scale like in Lost Ark where they will be instanced per server? One thing is for certain, participating in them will give you precious rewards. Some examples of these live events, which may occur during the weekend, include a group called the Drowned as they seek to conquer your realm together with the arrival of a mysterious figure on the Dry Steppes. 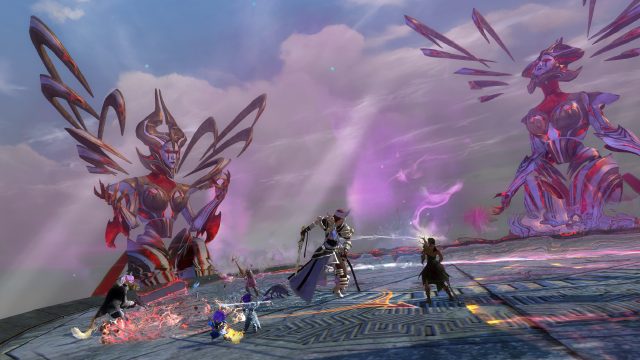 What’s more, is the team’s dedication to making sure that the experience provided by Diablo IV is commensurate to the expectations of the player base. On a regular basis, quality-of-life features and updates will roll in. These will be based on a voting system in which they will be working hand-in-hand with the community to identify the changes that will be prioritized for a given period.  But it is still not clear how frequent the implementation of these improvements will be, that is, if these are intended to be done at the start of every season or at faster sprints delivered in shorter amounts of time.

It is also ambiguous whether or not some of the improvements from the seasons will eventually make their way to the Eternal Realm as permanent features similar to Path of Exile’s Leagues so this is something worth checking later on. 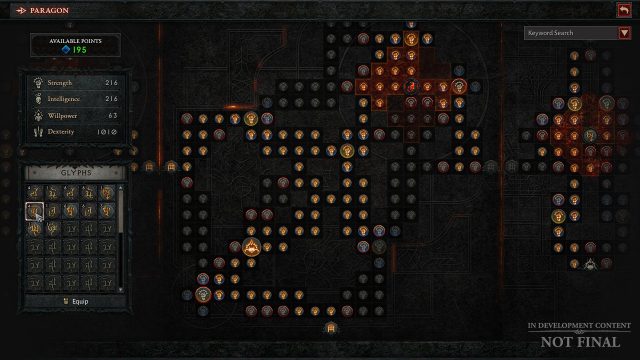 In addition to the quality-of-life features, Blizzard will be shaking up the meta when it comes to releasing constant balance patches for classes and builds. Specific to these are the continual introduction of new legendary items and Paragon Boards to ensure that overpowered builds will not take out the excitement and challenge of going against tough Enemies.

Diablo IV’s Season Journey will follow the format of Diablo III’s in that it will continue to be free for players. You will still be able to earn limited rewards during the season as you explore the Sanctuary. What’s different this time around are the “pinnacle-level difficulty challenges”, which once completed, will result in receiving exclusive cosmetic rewards, much like in Destiny 2.

Another new feature to be introduced in Diablo IV is the optional Season Pass. Similar to the implementation of regular Season Pass Models in Destiny 2 and Lost Ark, there will Free Tier rewards, which you will automatically gain simply by playing and progressing in the game as well as those that are paid. It is worth noting that the Free Tier will grant journey boosts, allowing you to reach max level faster by accelerating the pace of gaining experience points. As such, you will be able to progress multiple characters efficiently in every season. 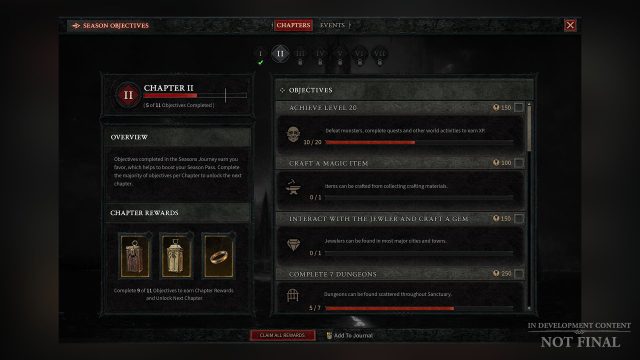 Remember that these boosts cannot be purchased so you will have to invest the time and effort to gain them. Comparatively, the Premium Tier is geared towards providing you with exclusive cosmetics and Premium Currency, which will not have an impact on how powerful your characters become. This is purely aesthetic in value rather than progression-related. Now, what is the Premium Currency you might ask? Well, this is an in-game money that you can spend on cosmetics in the Shop. These items purely alter the visual appearances of your characters without providing any bonus stats or perks. 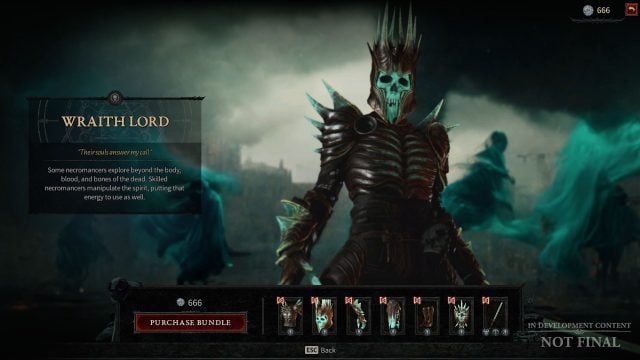 Players can also purchase the Premium Tier of the Season Pass at any point in the season, even allowing them to purchase levels to quickly acquire cosmetic rewards similar to Gwent. To progress efficiently, you should focus on completing Season Journey objectives.

The goal of Diablo IV’s Shop is to showcase cosmetics, which are optional, meaning that players won’t feel obligated to purchase them. So you can decide to spend on the game only once when you purchase it on launch and then participate in the Season Journey for free. 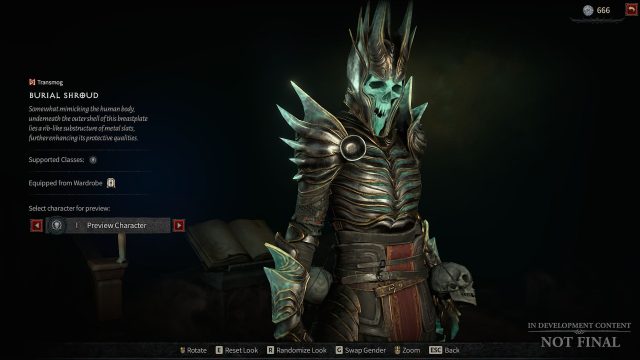 Since transmog is going to become a huge aspect in determining the best Weapons and Armor for your characters to look spectacular, it is important for Blizzard to show in great detail what players are expected to get with their money. There will be a preview functionality to scrutinize every piece of gear before purchasing it to identify its true value. Transmogs are available for every character of the same class rather than all of your characters because the designs may not make sense for a different class.

Don’t fret since some gorgeous-looking cosmetics in the form of unique and legendary armor sets will also be available as in-game drops. It’s just that there will be additional choices available in the Shop. In this Diablo 4 Quarterly Update, several unique sets have been revealed for the Barbarian, Sorceress, and Rogue Classes. You have the Barbarian’s Roman-inspired rust-colored armor set as a drop versus the Viking-themed wardrobe with the head and fur of a lion draped over his neck from the Shop. 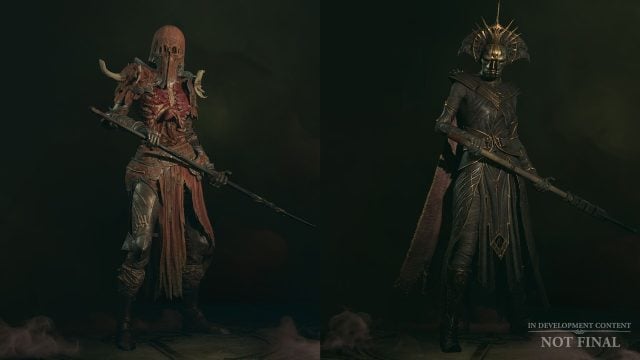 Next is the Sorceress with her grim armor depicting shards of bone, tissue, and muscle on her upper body versus an assassin’s look shrouded in mystery due to the tightly-wound and intricate headgear piece. Here, gold and black colors are emblazoned to outline the entire wardrobe. And finally, there is the fantasy-themed Rogue with a gold-embellished sophisticated design, which can be obtained as a drop versus the Scandinavian armor set with a heavy emphasis on materials gathered from nature. 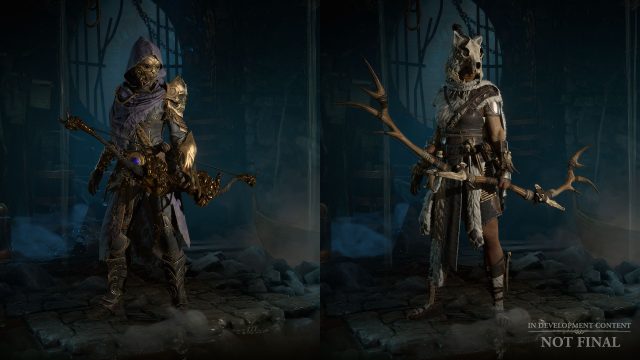 That’s it for the Diablo IV August 2022 Quarterly Update. For the Winter Blog, we can expect to receive more details about the endgame systems. One interesting idea that Blizzard has put out there is how characters on the Eternal Realm can possibly affect the way you progress in the current season. Typically, in Diablo III and Path of Exile’s case, such characters are shelved so you are required to create new ones to progress further in the season.

Diablo IV is shaping up to be a worthy successor in the Diablo franchise based on the regular updates we have been seeing so far! However, there are still questions brewing at the back of our minds as we head closer to its launch date. Hopefully, we will be given an exact date within the year – maybe sometime in 2023 as confirmed in the Xbox 2022 Showcase?

Stay tuned for more Diablo 4 content and be sure to check out our Diablo 4 Wiki and Twitch Channel if you have any questions on the game. What updates would you like to see next? What are your thoughts about the Diablo 4 August 2022 Quarterly Update? What endgame systems are you hoping to know about in December? Let us know in the comments below!