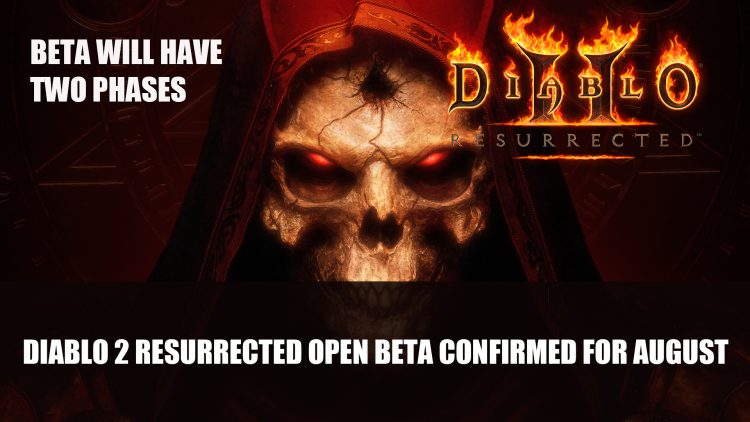 It looks like the Diablo 2 Resurrected open beta which was originally set for August is still going ahead. In a recent response to a concerned fan on the official Blizzard forum, Global Community Development Lead for Diablo, Adam Fletcher who goes by the username of PezRadar confirmed the open beta will still be taking place this August. There were no further details in this post but also assured that there would be “more news soon”.

In another post, a Diablo fan asked about the beta phases, one for pre-orders and one for all players, as well as how long they would the beta phases last. The same community manager confirmed there would be two phases, each happening over the course of different weekends. The post explains that this is typically when the “most people can play” which will help stress test the servers and multiplayer aspect.

The exact dates for the beta it is currently unknown, but as the release date is slowly getting closer we would have to assume it won’t be too far off. As for the response from the forum, some are not so happy about the length of the beta as hopes of a 2-week stint would seem to be preferable.

Previously it was announced that multiplayer beta will be coming in August but only available for certain platforms. The beta will feature 5 of 7 classes which are Amazon, Barbarian, Paladin, Sorceress, and Druid. Players can enjoy up to 8 player co-op, or go it alone as a solo experience. Blizzard originally announced Diablo 2 Resurrected earlier this year at BlizzConline 2021, confirming that it was a remaster and not a remake. We had a chance to check out the technical alpha in April, which we found stayed pretty faithful to the original. If you’re curious to know what we thought of alpha you can check out our Diablo 2 Resurrected Alpha Gameplay Impressions: How Does The Diablo 2 Remaster Hold Up?

You can check out the previous trailer for Diablo 2: Resurrected below:

Diablo 2 Resurrected will be launching on September 23rd on PC, Xbox One, Xbox Series X|S, PlayStation 4, PlayStation 5, and Nintendo Switch with pre-orders already available. The beta will be held in August.

One comment on “Diablo 2 Resurrected Open Beta Confirmed for August”