Capcom’s Devil May Cry 5 Review: Action game reviews are often hindered by the issue of accessibility and the skill of the reviewer, which can skew impressions depending on what fence you sit in: the casual audience or the min-maxers aiming to do flawless Hell or Hell runs. In this DMC5 review, I will aim to breach that gap between skill levels, and explain why Devil May Cry 5 is a game you really should buy and enjoy, regardless of how “good” you think you are.

DMC5 follows DMC4 hero Nero and newly introduced V as they set forth to stop a dangerous demon from awakening and overtaking earth. New players are treated to a short introduction to the events so far in the form of a video, which is “just the highlights” but still provides enough context to ease newcomers into the world of Devil May Cry. I was happy to see that the horrible aberration by Ninja Theory DMC did not make it into the game’s cannon. Thank you Capcom!

The story is delivered via a complex back-and-forth that makes the player take on the role of different characters at different points in the game’s timeline. Despite the initial confusion this generates, it is not long before the player gets the hang of the storytelling method and can follow through easily. However, it does create an issue where you just learn one characters controls and then switch to another, which can be frustrating at times.

The game also provides detailed records on characters, enemies and situations that may be referenced in an internal library. This is particularly useful for those wanting to understand the actually complex lore of the series, which is an underappreciated aspect of the title as most coverage focuses on gameplay. 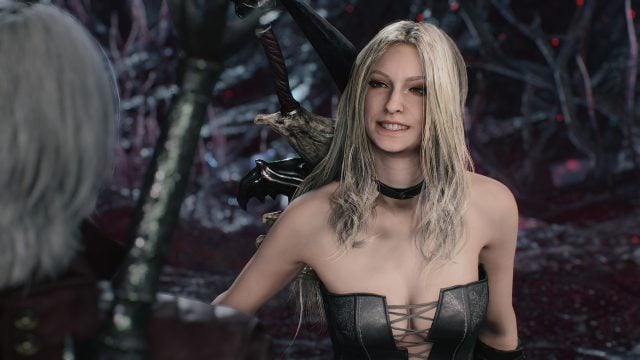 That’s the kind of outfit one wears to hunt demons! What? It might distract them?

Of course, Devil May Cry follows the tradition of manga titles such as Bastard! and is a demonic hard rock paradise of cocky demons who flaunt their stuff with the addition of naked girls wherever possible. The game embraces the corny and rebellious hard rock teenager feel of its origins and unabashedly commits to making you, the player, feel COOL. And that, I did, as I fancied myself an unstoppable force of awesome wrapped in a mantle of tricksy shadows with a side of several swords, all to the tune of some modernized metal. Feels good, man.

In short, the game walks the right line for an action title, delivering decent worldbuilding and over-the-top characters that match the over-the-top action, with intermittent humorous moments – mostly provided by a demon bird called Griffon who is most certainly inspired by Jafar’s parrot Iago (from the movie Aladdin). Seriously though his voice nearly sounds identical. The one-liners and punchlines had me chuckling, which only added to the giddy overall feel that results from kicking demon butt “SAVAGELY”. 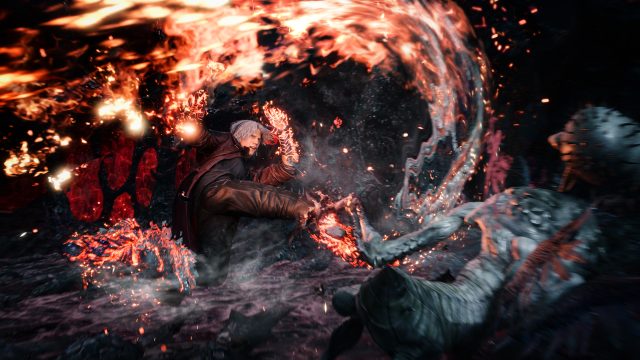 Gameplay is the main appeal of this title, as players take on different characters and master their skills. Nero is down an arm from the previous game, but this has been replaced with a powerful Devil Breaker that adds depth to his range of actions, which are certainly not few. Players will gather Red Orbs dropped from enemies and the environment or by completing missions Stylishly, and use them to upgrade and unlock skills, adding to a veritable arsenal of combinations that make it so no encounter is likely to be the same for any two players. The complexity of move combinations are further reinforced by the fact that each playable character has their own set of moves, unlocks and weapons.

As I progressed through the encounters, I found myself wanting to redo them to get that combat rank up and showcase my moves to perfection, and that drive to keep playing comes from the fact that any frustration I felt with the fight was 100% my own fault and a result of my execution mistakes. I never felt an enemy was cheap, or an attack unwarranted, but rather that I could have done better and gotten that SSS ranking “if only I had just…” 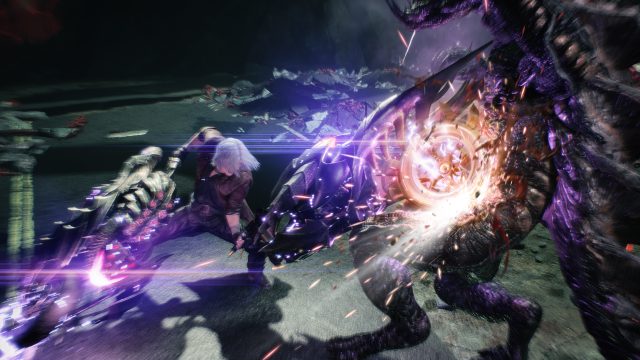 And thus, DMC5 lures you into its cycle of progressing through the game’s difficulty options and replaying each mission dozens of times on all its 6 difficulties. This is where the misconception that players must be skilled to enjoy this title should be addressed: just like Dark Souls requires you to be patient and learn, so too does DMC require you to invest time learning mechanics. To enjoy the game, you don’t need FPS no scope headshot skills, but rather you need to learn the combos, figure out the counters, and be creative in your battling.

DMC5 is here and with it action games are back for real. Many players are likely eagerly awaiting the release of Sekiro Shadows Die Twice, and to them I say: go buy DMC5 now, as Sekiro will likely be your From game of the year but DMC5 is THE action game of 2019, and rightly so!

DMC5 has excellent voice acting, which is saying something when you consider how cheesy some of the lines must have felt to the actors. The music does not disappoint, bringing each demon encounter the right amount of tension and excitement, and even delivering some unique nostalgia feels as players can customize their jukebox with tunes from DMC1 through DMC4. I can hear Capcom in the idle screens, that vaguely reminded me of Resident Evil and even Dragon’s Dogma. Overall, a well-balanced and well-implemented combination of calm and quieting tunes, tension-building violins, modern techno and hardcore metal.

The game’s visuals are, without a doubt, the best that Devil May Cry has ever looked, and the most important part is that the glorious graphics do not affect performance at all. I played for hours and hours, on 4k at 60FPS and did not see 1 frame drop. There are zero stability issues and I encountered zero glitches. Combos are executed flawlessly with accurate and responsive controls that have zero input lag or deficiencies. This is where action games must deliver or they fail: both controls and performance must be perfect. Devil May Cry 5 nails it on both counts. 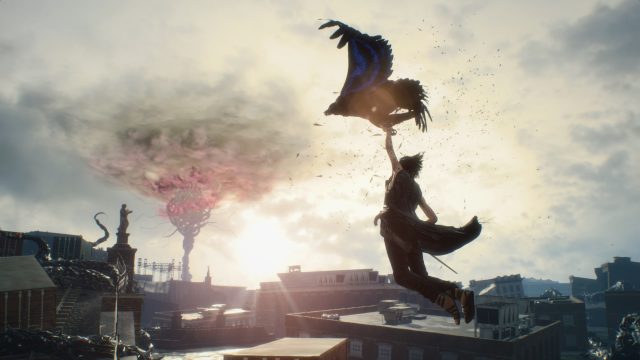 DMC5 is a pure action game, which means that if you don’t want to play it over and over again, the game is doing it wrong. Fortunately, Capcom has delivered in the gameplay department, and provides ample reason for re-visiting missions in the form of hidden collectibles, secret missions, and of course to farm red orbs and unlock more skills. Further, the game has tons of unlockable artwork and even unlockable skins that open up as you progress in difficulty.

Each difficulty mode adds its special touch, making enemies tougher and adding different combinations of them to the mix. If you start on normal difficulty (veteran players), you’ll find yourself quite enjoying NG+ on Son of Sparda, as you get to chain longer combos and make full use of your new abilities and extended powers. If you’re new to the series, you might be surprised to learn that you can get better mission ranks on higher difficulties, and this can be incredibly satisfying. 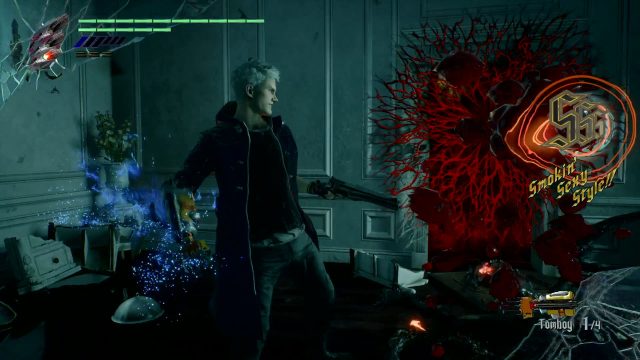 You’ll get to pull of better combos as you unlock more abilities, face tougher enemies, and get used to the flow of combat

There’s also the new multiplayer component, that gives players both asynchronous and real time options for interacting with other players. In some missions, secrets and collectibles on “your side” of the mission depend on whether your online partner has done specific tasks that affect your progress. Multiplayer also adds the option to rate other players, and good ratings result in Gold Orbs (a continue for your mission), so we can expect new players to be able to obtain several of those from generous strangers, or even from signing in as there’s a daily login bonus. This further enhances the appeal to new players, whilst adding a fun factor for veterans.

Please note that multiplayer interactions were sparse at the time of review, so we only had limited experiences with this aspect. 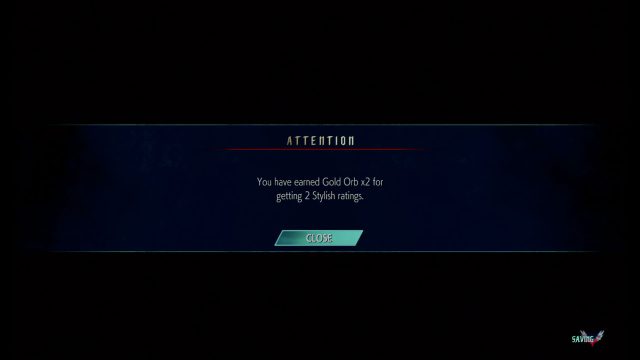 You will get a daily login bonus, and daily rewards for your rankings from “Link” missions.

DMC5 is hitting a sweet spot for a release window, as there’s a lull in all action, rpg and adventure genres in late february-march. This puts the game in a good spot as it won’t be competing for your time with other titles, but of course the question is whether it is worth your hard-earned cash. At 60USD, the game gives a basic 15 hours of content for a playthrough for a casual player. From there, the replayability kicks in and you would be looking at 70+ hours for full completionism, depending on your skill.

For the average player who enjoys action titles but doesn’t want to unlock everything and see every secret, 60USD for 30 or 40 hours of content might be steep, but the game more than makes up on it in terms of fun. The fun factor is simply off the charts with Devil May Cry 5, and playing it is an enjoyable endeavor regardless of your skill level, so long as you give yourself a chance to learn a combo or two and get satisfaction from smashing demons. 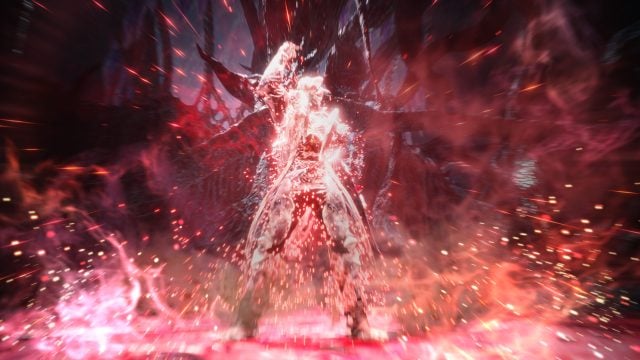 Many hours of content for the dedicated, average for the casual, but all of them packed to the brim with action

I had been waiting for DMC5 (the “real” one, not the DMC abomination) for many years. I am positively thrilled that the title is here, but as all fans I am always wary that microtransactions or modern business practices could ruin a beloved series.

Those fears were unnecessary, as Capcom (much like they did with Monster Hunter World), kept to the title’s original appeal and amplified it rather than reinvented it. Microtransactions are there for certain cosmetics such as previous title soundtracks, and there’s an option to buy Red Orbs for those who do not want to farm them, but none of this made me feel as if the base title was lacking, or if any mechanic had been tinkered with to favor an extra purchase.

All in all, Devil May Cry 5 is unexpectedly leading the pack for Game Of the Year due to great production values and an incredibly polished delivery. 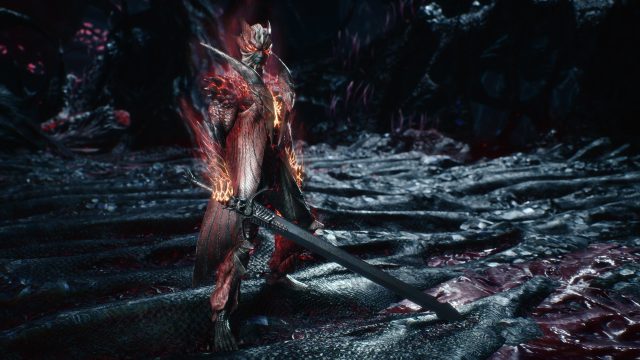 I’m sexy and I know it

9
Summary: DMC5 is a worthy return to the main stage for action games, delivering unparalleled gameplay executed beautifully and with consistent, remarkable performance. Fans of the genre will love this title, and newcomers are likely to become fans.
Story & Setting (8)
Gameplay (10)
Audio & Visual (9)
Replayability (9.5)
Pricepoint (8.5)