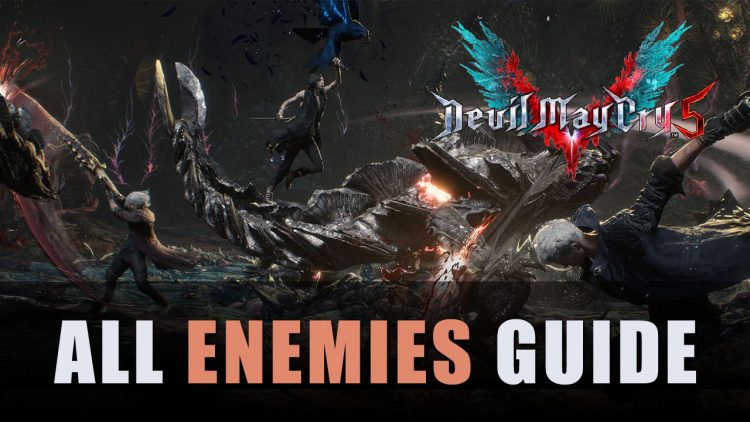 All Enemies Guide for Devil May Cry 5, featuring the in-game model images and descriptions by Nico, as well as where to find the enemies and some tips on how to take them on. If you want to learn more about DMC5, see our Bosses and Weapons guides as well!

All Enemies in DMC 5

There are a total of 19 unique enemy types in the Devil May Cry 5, and each enemy has its own moveset, strengths, and weaknesses. Some enemies can block and deflect attacks, some enemies have special rage modes, and others can only attack on melee or range. Learning their attack types and weaknesses is key to success, so read on for a full list of all creatures found in game and the best way to deal with them. 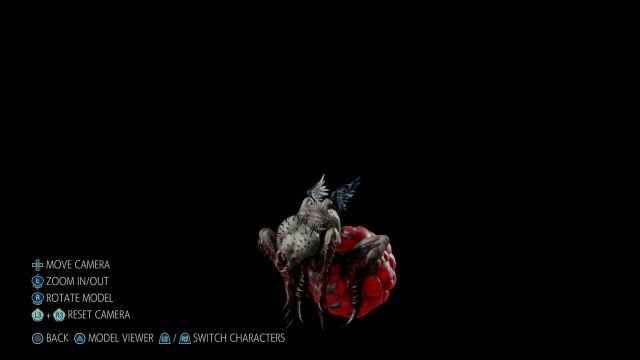 “Seems you’ll be running into a lot of these ugly suckers— and I mean “suckers” literally!

The good folks of Red Grave have had their blood sucked dry by these lil’ worker ants. Once the creatures have a butt full of the red stuff, they carry it off to the Qliphoth.

Well, on the plus side, they are pretty dumb—they might even ignore you and keep working until you turn on the heat. Be careful, though. Worker ants don’t seem so weak when you’re being swarmed by ’em.” 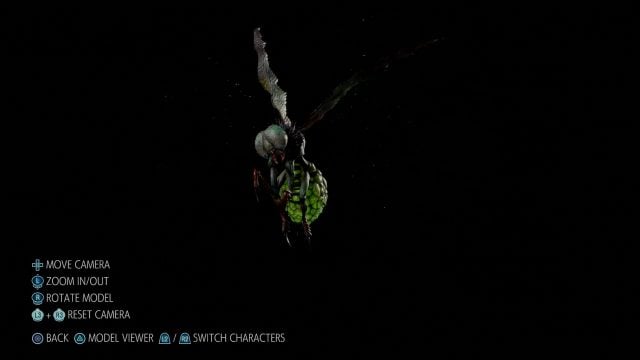 “If you thought those other bugs were bad, you’re really gonna hate these guys.

The green stuff in their butt ain’t any kind of blood—it’s a healing nectar that’ll fix up other demons’ wounds in no time at all.

My recommendation: Kill these first, before they make themselves a nuisance.

Oh, and it looks like they spit some kinda poison juice too. So, uh, maybe bring an umbrella.” 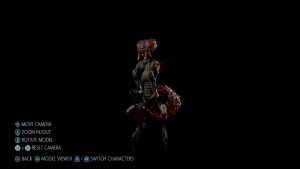 Just goes to show the power o’ blood—this one’s sucked up so much of the red vino that it’s crystallized its body. You could probably knock some of the crystals off with a few hits, or take this guy down and get the whole lot.

Trouble is, from what I’ve seen, these shy lil’ monsters are mighty skittish. First sign o’ danger and they’re outta there. Better work quickly if you want the big payoff.” 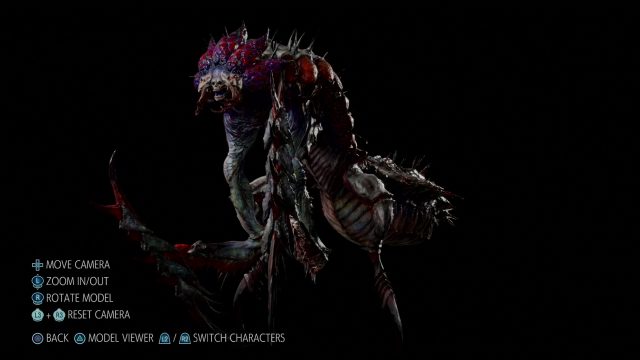 “I knew it! Where there’s worker ants, there’s gotta be a queen too.

This big gal’s got the armor to take a beating and the tools to dish one out. And when she’s angry, she ain’t picky about her targets—she’ll scythe through her own demon buddies to get to you.

If that ain’t enough, she’ll get fired up if she sucks enough blood. Watch out if her body turns red—that’s your sign that it’s go time.” 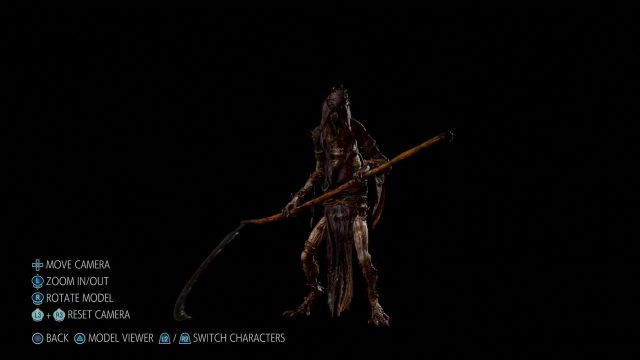 “These shambling meatsticks are residents o’ the underworld, foot soldiers straight from the legions of Hell.

Time was, these things only appeared on the mortal plane by possessing a wooden doll, lump of clay, or something similar.

Now? Those creeps walkin’ around Red Grave are the genuine article. It’s a sign that the barriers between the demon world and the human world are breaking down.” 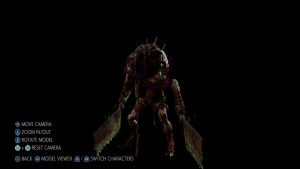 “Take a Hell Caina, torture it till it goes mad, throw weapons in its hands, and this is what you get.

Their hatchets are real nasty, and they’re nimbler than they look. Expect quick attacks when they go into a frenzy.

Judging by the samples we got, these things are extremely susceptible to pain—so you better believe they won’t take any punishment lying down.

Knock ’em down, but keep your guard up. Next thing you know it’ll be back swinging like a madman on fire.” 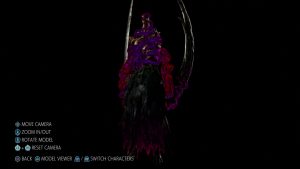 “A high priest in the choirs o’ Hell. Ain’t that somethin’?

These fellas tend to leave close-quarters fighting to the grunts, which they can summon in to take the heat off themselves. Meanwhile, they attack from long range by extending those snakey tentacle arms.

They’ll try to keep their distance and dodge gunfire when they can. You’ll just have to show these slitherin’ scumbags you got the smarts to get past their defenses and send ’em screaming back to the pit.” 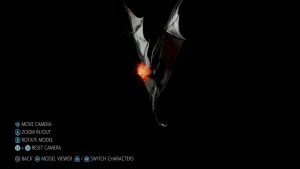 “Ever heard the phrase “like a bat outta Hell”? Well, this is it.

These leathery lir pests have got some kinda combustion chamber built into their biology. Meaning? Well, they breathe fire.

On their own, these critters ain’t gonna burn your ass up too bad. Just watch your back when a whole swarm tries to crash the party.” 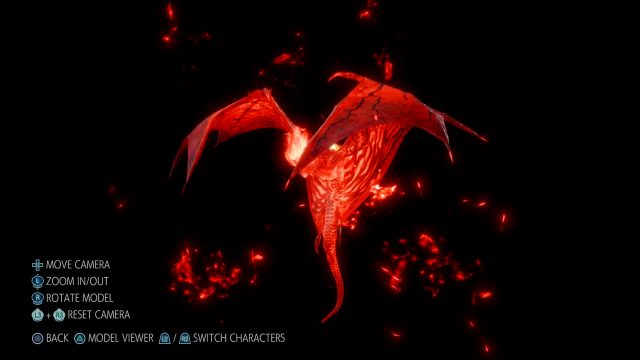 “Y’know, we see a lotta weird things coming up out of the hot place, but this one’s really somethin’ special.

See how the combustion chamber is mounted on its spine, so when it spits flame it sets itself on fire? That’s the kinda design I can get behind.

Not that I’ll object if you smash these little assholes to kingdom come. Try aiming for the combustion chamber on its back—should take the fire out the critter and make for easy pickings.” 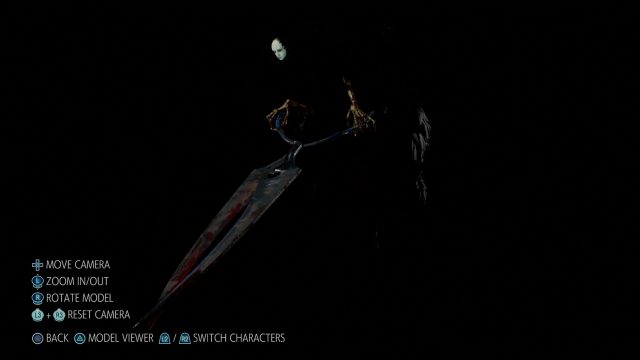 “Now a master engineer like me’s gotta have a profound respect for the laws o’ physics. So when these creepy specters come drifting through walls with their shears a-choppin’, it kinda gets on my nerves.

But they’ve gotta be solid sometime—otherwise they couldn’t block your attacks with them shears.

Near as I can tell, that noggin controls the whole shebang. Look for some cue from the head, and aim your attacks there. Might go down easier’n you think.” 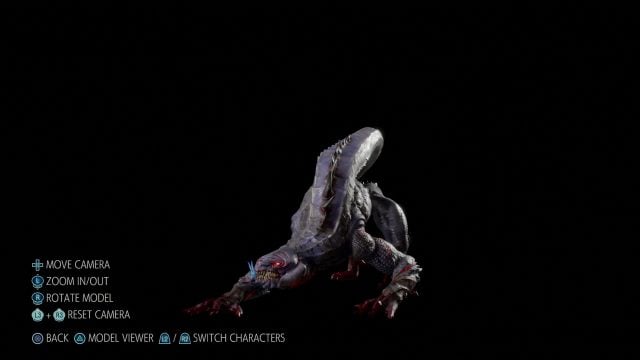 “The pits of Hell spew up all kinds o’ reptilian nasties, and this is one of them.

I studied their cell samples and let me tell ya, their muscle tissue is something else. Each limb has power like a hydraulic cylinder. That’s how they jump so dang far.

And I ain’t exaggeratin’ when I say their retractable claws are razor sharp. I tried one on some sheet metal—zzzzip! cut right through. Weak to impacts though. Think you can break ’em off?” 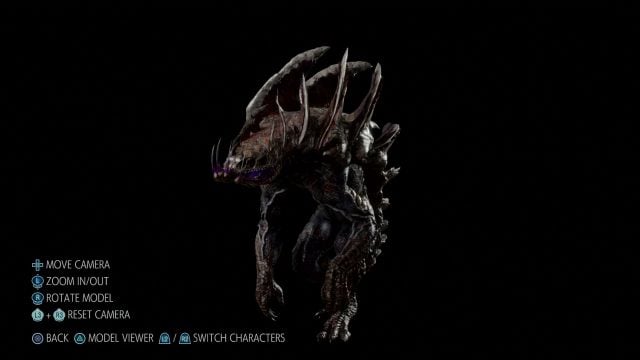 “Another big lizard that’s crawled outta some deep dark hole in the underworld.

Each one of those spikes on its back is like a giant saw tooth, and it’s not afraid to get ’em spinning!

They’re sharp but brittle, so try snapping ’em off in between dodging its attack runs.

Oh, and it’s got these nasty little neurotoxin sacs inside its chest. Step aside when it starts hackin’ something up —that stuff is lethal!” 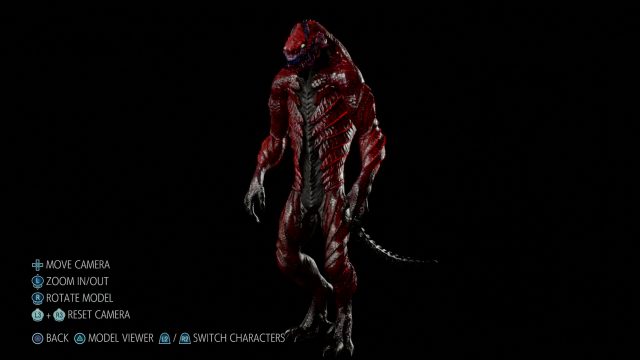 “I got this theory that demons mutate based on their deepest, darkest desires.

So take this big lizard. It wants to hunt, right? It wants to go faster. Wants to kill faster. Day in, day out, all it can think of is speed.

A few generations of that twisted killer instinct, and you get a freak so fast it ain’t even moving under its own power no more. This sucker uses raw demonic power to do little space-time jumps. It’ll warp right next to you and bite your face off before you can blink! Hope you got quick reflexes.” 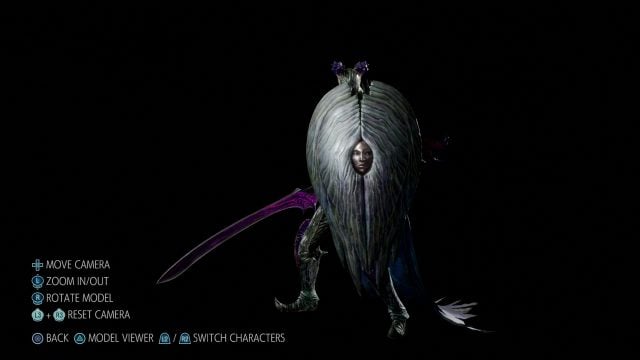 “In his journals, my daddy sometimes mentions the Black Angel—some kind of powerful demon that used to inhabit the underworld.

Daddy had a theory that it was created by transubstantiating an unwilling human victim into demonic flesh.

If that theory was right, then these dead-eyed creeps are like a mass-produced version of the Black Angel.

Their shields? Hella tough. If you wanna get around ’em, you’re gonna have to use your head. Good luck with that.” 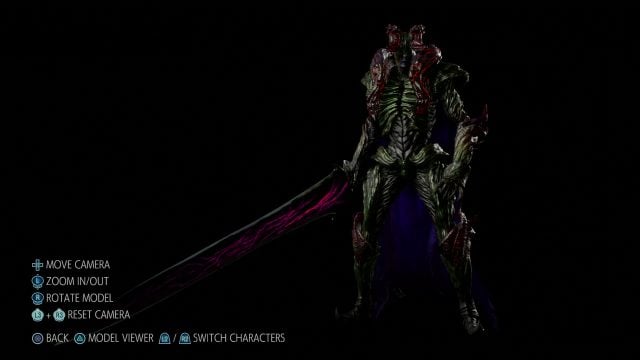 “Check out the armor and weapon on this demon. I’m seein’ clear similarities to the Black Angel.

My guess is these are some kinda prototype, or maybe modified version of the Black Angel.

We’ve seen these weirdos speaking to the mass-produced types, giving them orders like they’re in command. Seems they’re smarter than your average hell-beast.

And hey, I know you think you’re invincible, but that sword’ll give you more than a close shave. But, if you can parry it, I reckon you’ll have a pretty big opening to do your stuff.” 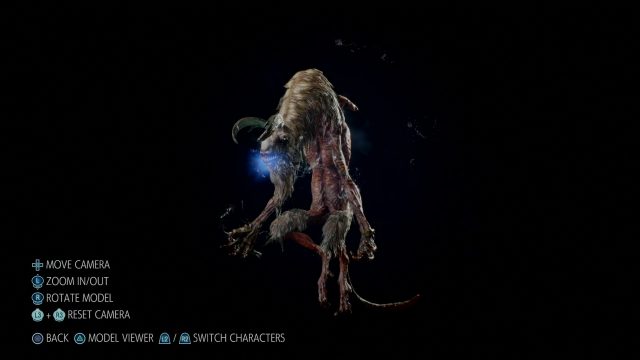 “Your average demon don’t have the smarts to actually wield their power as magic.

This fella breaks the mold, though—he may only have ice tricks up his sleeve, but that’s still enough to kill you if you don’t watch your ass.

Just look at those freaky, stick-thin limbs. Physically speaking it’s weak, and it knows it, too. It’ll try to keep its distance and throw up a magic shield to block your shots. You’ll have to get in its face, or wait for your chance to shoot past the shield.

Hey, nobody said this business was easy.” 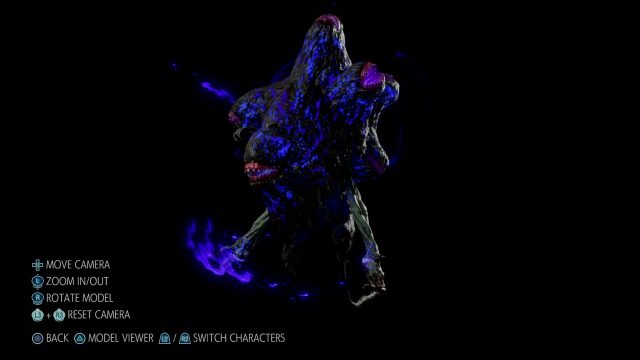 “Sure was interesting dissectin’ this demon.

This thing bears out my theory on demon evolution. Can’t do magic incantations without a

mouth, right? So after a few generations of demons obsessed with arcane chants, you get something that’s all mouths, with its muscles so atrophied it can hardly move its limbs.

And more mouths means more power. My guess is this thing could kill you dead with a single spell if you let it get the chant out. If you see it startin’ something real ominous-looking, you better shot it down real quick.” 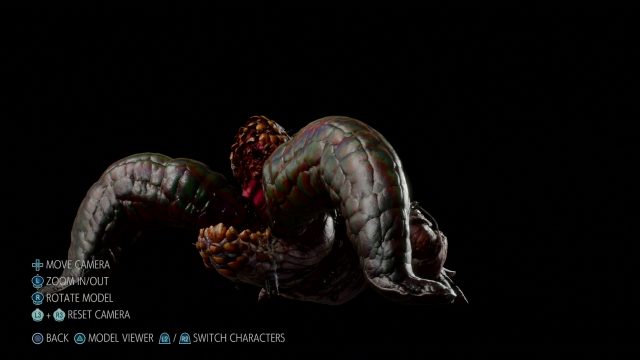 “Every now and again you get a demon so absorbed with gluttony and power that it starts cannibalizin’ its own demon kin.

See how other demons have chained up this thing’s mouth? It’s good to know that even the demons are afraid of becoming chow.

With the restraints in place, this big boy’ll just stumble around lookin’ sorry for hisself. Not too dangerous.

Bust the chains off, though, and it’ll go hog wild, eatin’ everything in sight. If it chomps a few bad guys, all the better. Just don’t come cryin’ to me when it nips your buns.” 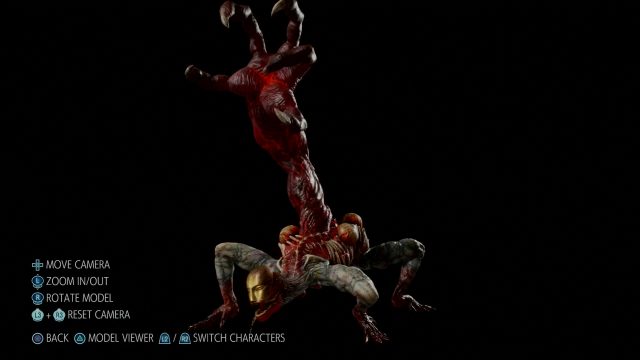 “At first glance, these uglies seem half-formed, like they broke outta the egg too early. I gotta admit, there’s still a lot I can’t figure out about lem.

Half-baked or not, theylll tear you a new one if you don’t watch out. They got more strength in those spindly arms than your three average demons combined.

And what else is on the menu? Magic powers. When you see ’em kinda dancing around, they’re absorbing demonic power right outta the atmosphere.

What really bugs me is those masks they wear. The masks are important to ‘em somehow…Just wish I could figure out how.”