Desperados 3 launches today for PC, Playstation 4 and Xbox One, and is a direct prequel to the game Desperados: Wanted Dead or Live that launched in 2001. It is developed by Mimini Games, the team behind the smash hit Shadow Tactics: Blades of the Shogun, which released in 2016 and plays in a similar fashion. In this Desperados 3 Overview we’ll take a look at the features of Desperados III, and although this is a sponsored video, our thoughts and opinions about the game are our own.

As I mentioned just a moment ago, Desperados III is a prequel to the original Desperados game, and follows a young John Cooper on a quest for revenge in 1870s Colorado. Players will travel with John and company across the Rocky Mountains, to Louisiana and finally back to New Mexico where the first game took place. You’ll travel through the western frontier of the united states and see the boom towns of days gone by. 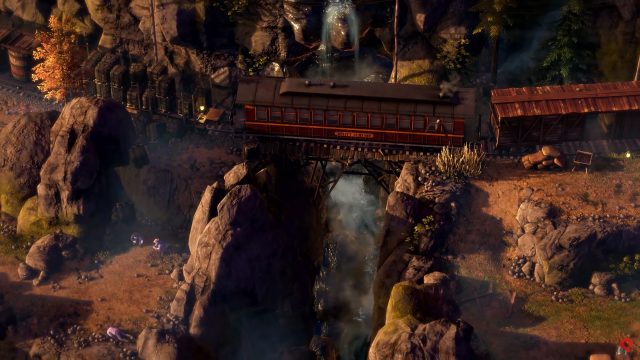 The game has a western theme and feel, and it really does justice to this time period, perhaps more so than any game I’ve played recently. Even Red Dead Redemption 2, a game I enjoyed very very much, doesn’t give off as much western vibe as Desperados III. A statement that is surely to get me in trouble without a doubt, but nevertheless is true.

From crashing a shotgun wedding, to blowing up a bridge, Desperados must have cashed in on nearly every cliche Western film I’ve ever seen. However, there is something absolutely charming and nostalgic about it, and you can’t help but enjoy this aspect. It takes you back to being a kid and reading about the “Wild West”, or watching an old John Wayne movie, and it’s an experience that I have not had in many many years to say the least.

Mechanically Desperados III is a real-time tactics game where you take control of one or more characters on a map with certain objectives, and use the skills and abilities of your character(s) in anyway you see fit to accomplish these objectives. It plays very similarly to Shadow Tactics, and for those of you that remember, it reminds me a bit of the old Commandos games from the late 1990s and early 2000s. Man I miss those games… 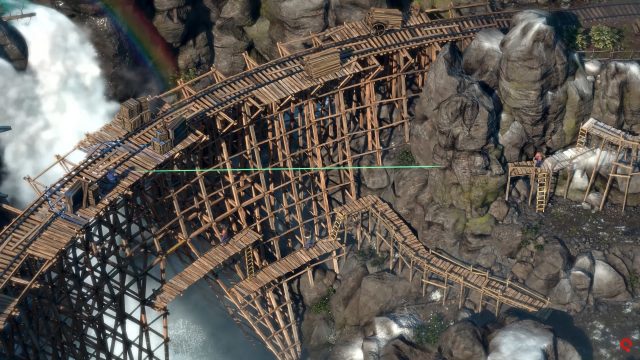 Desperados has a large focus on stealth combat, and ideally (though not always easy) you’d make your way through each mission without alerting any enemies to your presence. This is made possible by the abilities of each character, and in Desperados III you will have 5 different characters that you play, depending on which mission you are on.

One particular aspect that makes some of the amazing things you can do in Deperados III possible, is the Showdown Mode. This mode allows you to queue up certain actions with each character and then execute them all with the press of a button. Why this is important is because often you need 2 or more characters to certain actions simultaneously in order to pull off a missions successfully and you can’t do this effectively from the normal UI. For example, maybe there’s a guard that needs taking out, but if you down him another guard will see you. Well you can queue up two separate characters to take down these guards at exactly the same moment, preventing you from being spotted and the alarm sounding.

You don’t have to complete each mission in stealth though, and gunslinging is a lot of fun too. Sometimes you just feel like “Screw i!”, and open fire on some guards and deal with the aftermath, because there are sections that are challenging and you just don’t want to spend any longer figuring out how to do it perfectly. And other times, you just feel like mixing it up and having a little fun, seeing just how many enemies you can take on at once! 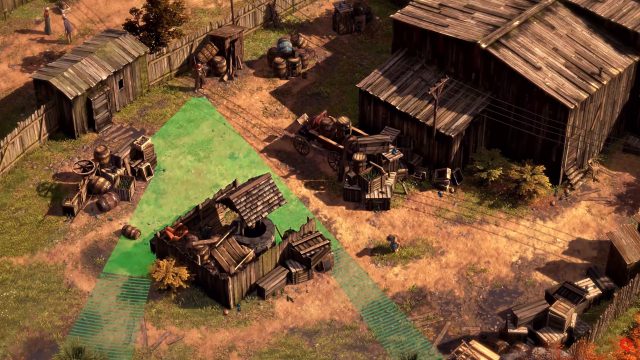 What I love about Desperados III is that it is very easy to learn, but challenging to master. The concept is simple, but there is tremendous freedom in each mission, allowing for various ways to solve problems. For instance, in areas where there are lots of guards maybe you can whistle them over to you 1 by 1 and pick them off, maybe you throw a stick of dynamite and blow them all up, or maybe you drop a boulder on their heads crushing them all at once.

You can often use the environments on a particular mission to your advantage, and that really enhances the feeling of freedom that Desperados III brings. It’s just a good feeling when you toss a coin at a horse, spook it, and it kicks some unsuspecting enemy in the face killing it instantly. Or knocking over a pile of logs near a lumber mill onto unaware enemies below, only to see them crushed in an instant.

Though the Missions themselves are scripted, there’s a surprising amount of replay value in the game as well, not only because of the sheer amount of ways things can be done, but because of the challenges the game has. 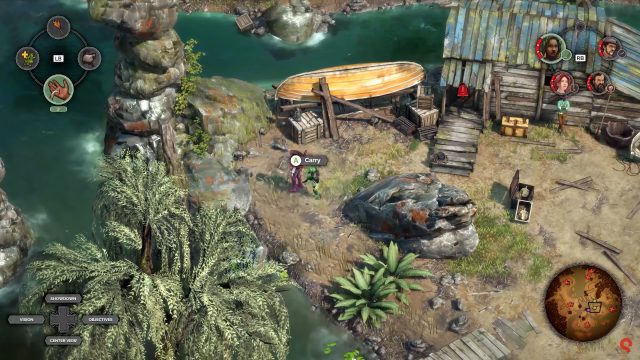 Each mission has its own set of Challenges, testing the skills of the player to not only beat the mission, but to do so with extra style, or maybe even speed run it. Additionally, you will be contacted at some point in the game and be offered very specific challenges called “The Baron’s Challenges”, that have you replay older missions with a very rigid set of rules and with different characters than you previously used on certain maps. So there are new ways to play each map, even after you finish the game.

Another feature that has been added, is that you can now see what you did at the end of each mission via a recording of your movements and actions (saves too!) This helps you better isolate where you could have done better or what worked well for you, and is just generally a nice to have, even if you don’t use it all that often. It also shows you enemy placements, which might be useful for future challenge attempts.

The graphics of Desperadoes III are not overly impressive, nor are they terrible to look at. They are somewhere in the middle of what you would expect for this sort of game, and honestly I have no real complaints with them. They were quaint, charming and enhanced the game rather than distracted from it.

On the audio front, the game’s music really helps to set the western feel of the game, and I don’t think it would be quite the same without it. That twangy guitar really sets the mood, and make you feel like you’re actually in a western. I have not played all maps of the game, so I’m not sure how much new music there is all the way through, but it did vary a small amount from mission to mission early on. 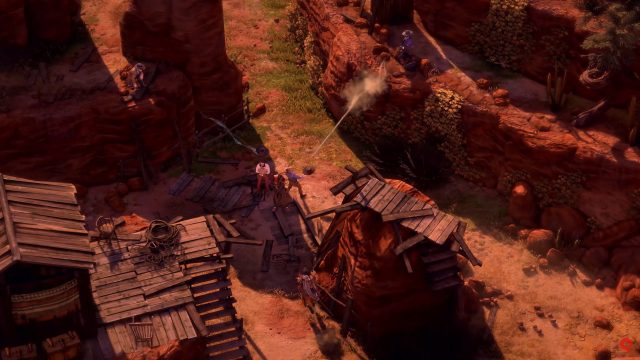 The voice acting was phenomenal, and the banter between characters as missions went on really added immersion to the game, and made the story telling a bit better than I was expecting. The southern accents were really pretty well done, especially on enemies who you hear say some of the funniest things, and again really helped to create a western vibe. This is one thing I think more games could learn from, and Desperados III really comes through here.

Technically the game ran fine for me at max graphics on my Corsair One Pro, as you’d likely expect. But I had no crashes, or bugs of any kind, and the game always loaded promptly and swiftly.

One thing that I was particularly happy about was the speed with which the game loaded a quick save. If you didn’t know, you quick save a ton during each mission because you’ll be replaying the same area of a mission repeatedly if you make mistakes, which you will. The game loaded in like 1 seconds every time I messed up or needed to redo do a portion, so I was instantly back into the action, and had no dread of dying and having to wait for a reload.

Though this is a sponsored video, Desperados III is easily one of “those games” that I probably would have played anyway. In fact, I enjoyed my time with it so much I tried really hard to fit it into my stream schedule just so I could play it more. The extremely addicting gameplay, coupled with a solid story and great characters had me waking up thinking about it, which is rare for any game these days, to say the least. 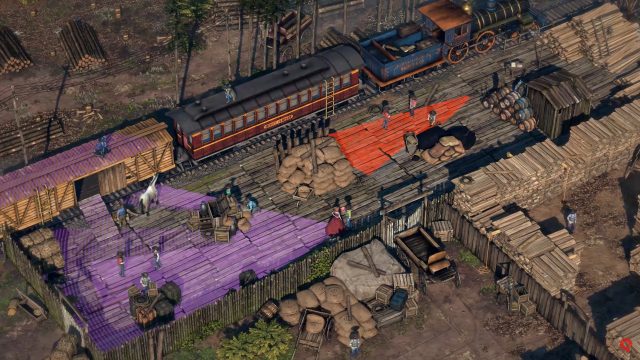 I don’t know exactly how long the game is, to be truthful, and I can see this being the main concern for people that would be paying 49.99 USD on PC and 59.99 USD on console. But I probably played 12 hours (on Normal Difficulty) to get to Mission 7 and I know that there are at least 14 Missions, so you’re looking at around 25 hours or so for one play through. That’s if you don’t try any of the challenges, and I’d expect it to be even longer on Hard, since it was by no means easy on Normal.

I think that’s pretty fair for the price, especially since there are really no other games out there quite like it. If you’re looking for something a little different, and you love strategy games, or games that involve a high level of tactics then I think you’d really enjoy Desperados III. It comes out today for PC via Steam, and on Xbox One and Playstation 4. Make sure to use the tracking link below to help support the channel, and head over to the official discord of the game if you have any questions at all about it!

For more more overviews/previews be sure to check out next Almighty Kill Your Gods Preview and Alaloth Champions Of The Four Kingdoms First Look: Isometric Souls-Like RPG Indie.