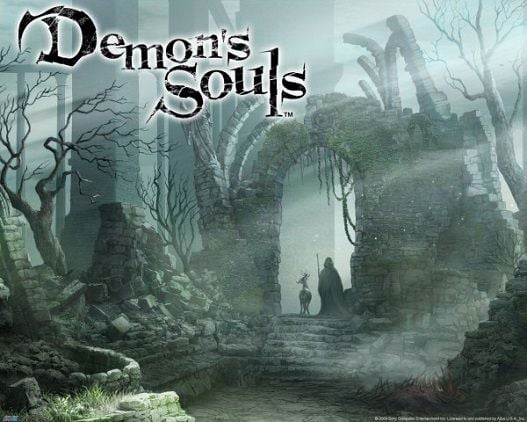 Our hero put his journey on hold after some frustration with a dickweed claiming to be the Old Monk.  Prior to said dickweed, we vanquished Hall and Oates and possibly Donny and Marie along the way.  There’s a lot of corpses.  It’s possible theirs are in the pile somewhere.

I’ve come to the conclusion that the Tower Shield is pretty much useless.  Not only did it not stop the Storm King’s attacks, my inability to get out of the way of the second volley meant death.  Back to the Kite Shield.  In case you hadn’t guessed, my decision for the night was to take care of unfinished bidness. Storm King kinda bidness.

And back to the rocks.  I figured From put them there for a reason(1)….might as well use ’em.  I use the Storm Ruler for a little bit.  The slow recovery time is more than aggravating.  Especially when the Storm King is so big it’s hard to accurately judge distance.  Most times I was able to hit him twice a pass.  Sometimes only once.

Time to get the bow out.  As soon as that little beady eye shows itself I open fire.  This allows much more than two hits for sure.  Even with his cruise missiles he’s no match for a rock and a bow.  The missiles make a pretty splash when they hit the rocks though.  So he’s got that going for him (anyone getting that reference gets imaginary loot).

Fun Fact: “hitting” the Storm King from a crazy distance for 0 damage still makes him yell at you.  He’s pretty whiny for such a big dude.

I get the pure stone from his death and another pure from the lizard below.  Are pure stones really as easy to get as they have been?  I don’t recall that at all.  It’s not like I’ll use most of them but I’ve made sure I have room to carry them.

With that jerk done for it’s time to harass everyone’s favorite crow(2).  She calls me scary.  It’s a little weird that, apart from a misspelling (should be “skary”), the game knows who I am. Get it?  The Krow is Skared of me?  Ha ha ha ha!

I get some white arrows and another colorless soul(3).  Time to up my penetrating sword a level(4).  Also, for the record, there is absolutely, positively no way at all that I visited a couple NPCs in the Nexus first to make more of these(5).  So get that idea out of your head already……

In unrelated news I managed to upgrade a Rune Sword and Shield all the way somehow(6) and I have to ask the question to From: Why is there even an option to upgrade the Rune Shield(7)? Whose sick idea was that anyway?  Miyazaki talks about masochistic tendencies in game creation but that’s pure sadism buddy.  Ain’t fooling nobody.  Double negative for the win!

With a slightly better weapon it’s time to take on the Old Monk again.  It’s the quest for the non jerk human player.  Will I ever find one?  Eventually…

It actually only took three tries but the first two make me question humanity to some degree.  The game already gives you some pretty heavy advantages for this fight if you’re the Monk.  I mean the yellow orbs, the gigantic and intimidating life bar at the bottom of the victim’s screen, etc. etc.  Do you really need to invade people questing with max gear and more grass than…a…um…field.  Of grass.

The first guy looks mostly like a repeat of last time.  Falchion, shield.  This time, instead of hiding at the entrance and changing things up with some casting, this guy is using something to be “invisible” (not sure if it’s a spell or a ring because I don’t remember casting).  Either way, it’s not like the small glowing cloud is THAT hard to see.  I actually almost get a win from sprinting in and mashing R1.  Sadly, he dips into the field and is full health again.  I’ve only brought 4 full moon and 8 late moon grass in.  I refuse to have a marathon fight with the victor being the one with the biggest field.

After he shows the level of restraint of a certain blue monster around a jar of cookies with his grass, I stop healing which essentially concedes the fight.  I don’t have quite enough stamina to finish him.  It’s always a hit or two away.

Pro tip: Even though I’ve only done this four times since being back total, I still know to IMMEDIATELY roll as soon as you step into the fog(8).

The second opponent shows the same level of general asshattery as the first.  I’m again in a position in which I run out of stamina before I can land the killing blow.  The grass addict isn’t going down anytime soon.  Let’s try it one more time before going offline and removing the human (dickweed) element.

I ascend the steps with a little more hesitation.  I’m better at shooting Mindflayers in the neck and chest and the face worms aren’t a challenge but the realization I might need to not win this against a human opponent is a little sad.

Apart from attacking me the second I walk into the fog, this guy seems different. Executioner ax.  No shield in sight. At least he’s being creative.

He’s also with one of the worst possible loadouts to fight me.

Big, slow weapon whose distance I am familiar with?  Check

No viable means of consistent defense except dodging?  Check

Remember me describing my “Kiln Challenge” earlier?  Learning to space yourself to make your opponent miss and then close in for the kill.  I did it with these guys in mind (well actually the Black Knight Great Ax/Sword users that used to be everywhere in Dark Souls but same idea).

So here’s the play by play:

Old Monk swings at Skarekrow as Skarekrow enters the fog.  Skarekrow is already rolling and the hit misses.

Skarekrow locks onto Old Monk and steps back a few paces.

Skarekrow goes R1 happy on Old Monk, missing no hits and leaving the Old Monk with about 5% health remaining. I don’t know if he was a grasser actually.  I don’t think so.  If he was, he missed the second he had to use it.  Either way….another area clear.  More importantly, Pure White World Tendency!

I suicide in the Nexus to be on the safe side.  Then I return to Latria.  I get a twinge of frustration thinking that I’ll have to go aaaaaaaalllllll the way back up near the first Barbershop Quartet.  But honestly, I’m there very fast.  It only takes forever the first time.  AKA the “adrenaline” time.

I now have the key to Rydell High’s cage so I use “evacuate” and then head back to the prison.  He thanks me with a ring I’ll never use.  Thanks Champ!

I walk around the ledge to the area that used to be blocked by rubble.  I get some new threads.  All in all…..not a bad night. The Cheat’s New Boots (A cute girl and an astronaut gave them to me)
(1) The actual reason is that they’re decorative speakers for the Storm King’s outdoor sound system
(2) Snuggly the Crow!  Place a gift in her “nest” and she provides you with a surprise.
(3) White arrows = best arrows, and colorless demon souls are used for upgrading some equipment and are pretty rare
(4) The Penatratiest!
(5) I’m in now way referring to the Stockpile Thomas glitch that allows you to duplicate items…..nope….didn’t do that.
(6) Ok, ok….YES!  I did use the glitch.  However, to keep the integrity of the playthrough I only used the ill gotten colorless demon souls on items I didn’t plan on using like the Rune Equipment. I kept a count of how many legitimate colorless souls I found and only used that amount on the Penetrating Sword.  Still the Penatratiest!
(7) Literally zero benefit
(8) Because people are dickweeds

Read the rest of the Series