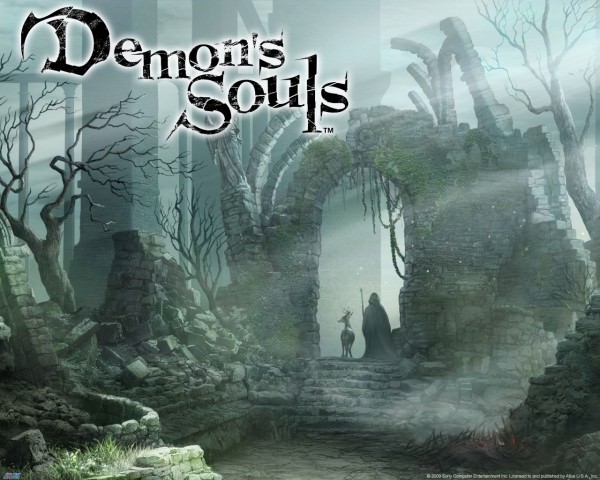 Every loose end but one received a knot last time.  Here we go…

The King is Dead (by Megadeth?)

The False King awaits me.  My last challenge.  The end of the road for all intents and purposes.  I have some souls.  Enough for a few levels actually.  I end up with enough slots for Firestorm and enough magic to use it once.  Adding some ultra masculine Old Spice to my pack,  I head up for my last battle.

I’m torn between excitement and sadness.

At the Penetrator Archstone (perhaps for the last time ever) I make quick work of three archers.  The Red Eye Knight is next to fall.  Two more archers.  An assassin.  One more Red Eye.  Lastly, two ministers.  They look like they’re chuckling with some great secret.  It must be great to keep laughing through the pain of archery.   I retire my old ally, the White Bow.

I take a last look at the carnage a Blue Dragon once caused.

An invasion message, something unheard of in this playthrough, appears.  For a second I think I’ll accept the challenge.  But only a second.  I’d rather not go head to head with a guy with a field of grass.  And likely the phantom will have some weapon combo that’s far more effective than I’m willing to put forth the effort to figure out.  But mostly, it’s no longer the right time.

I can almost see Ostrava’s lingering shadow on the steps.  This vision is replaced with another of my former friend, wreathed in red bearing down on me on the narrow walkway.  Strangely, this second vision is recalled no less fondly than the first.

One button.  A single depression of “X” is the only barrier left.  I enter the fog with this single and small movement.

For those of you who have been here before, you know how this fight goes.  I intended to list the pertinent facts like I did with the Black Phantom duels.  But all of us know that there’s no justice in simple facts, no beauty.

The False King is no ordinary battle.  It deserves better.

The battle starts with surprising quickness. Should you survive this initial assault, you are greeted with something unique.  Coldness.  Calculating and methodical, this boss is like no other in this game.  Sure, there are “slow” bosses.  But the King is not slow.  When he wants to be, he’s right there.  Yes, there are other bosses that react to you.  But not like the King.  The slow walk.  The stare.  Every bit of his posture and being is intimidating.

He isn’t big enough to make you look like a mouse.  But somehow, you feel smaller than that.

What can I say about the fight itself?  That he managed to take three soul levels away from me?  That Firestorm in the hands of a beginning mage is less effective than the blade?  That I’m not sure if my kunai can poison him, because I can’t use them fast enough to feel confident he’s immune?

That all happened.  It’s part of the battle.  But this boss transcends the individual movements that the fight actually “is.”  It rises above the clash of steel.

So what can I say about the fight?

Two beings collided in a world far above Boletaria.  One was meant to walk away.  Though the fight weakened me, I emerged victorious.

And let the sun bathe over me I returned to the Nexus and was greeted by a thunderous crash. The Maiden in Black reached out to me as if an offer of an embrace.  Instead, I was dragged into the void below.

How many of us imagined the Old One before this moment?  I know I did.  Did any of us get it right?  I did not.  Can this truly be a demon?  I am welcomed inside and meet the real King.  The one to pity.

Since around the time I first ventured into Boletaria, I’ve been playing games quietly.  I’ve missed much in the way of sound.  I am taken aback when I hear the real King.  The clarity is something I had not experienced before.  This, coupled with his feeble attempts to wield such a mighty weapon, makes it hard to win this battle.  But mercy and compassion lend itself to the same conclusion as greed and hatred.

I am asked to leave by the Maiden.  So the Old One can go back to sleep.  I am inclined to allow this.  Surely the majestic being cannot be truly evil.  I am too enamored of its existence for this to be so…and truth is what those who write history wish it to be.

I am given a few last words.

I am told that the Nexus shall trap me no longer.

As I turn my back on her, I forgive the lie…