As we predicted in 2017, a Demon’s Souls Remake has been announced as coming to Playstation 5, with Bluepoint Games and Sony Japan Studios work. This is incredibly exciting news for any Souls or FromSoftware fan, as it’s the game that propelled the studio and series to international fame.

Why is it a Playstation Exclusive?

A lot of Souls players have enjoyed the games on PC and Xbox, and are therefore surprised to see Sony has exclusivity over this title. While there is controversy about the role of exclusives, the fact is that Sony Japan Studio was part of the development of the original game, and Sony Computer Entertainment funded the entire project and owns the IP. It’s not unreasonable for Sony to make games for their own platform, and since they are in the business of selling that platform and the games they make for it we see it unlikely that their titles would make the jump to others in a hurry. This is possible, of course, but it’ll likely be long after that game has stopped driving PS5 sales. 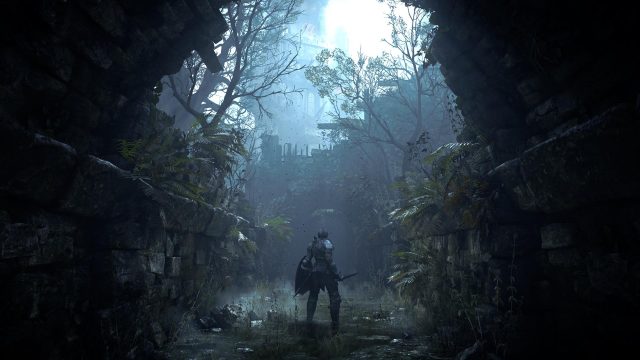 But what about Atlus? And Namco?

As we explained back in Dec 2017, the original game’s reviews by Famitsu were not flattering (two 7’s, a 6 and a 9). Additionally, initial audience tests revealed the difficulty was perceived as so high that the marketing team wanted to wash their hands of the project, effectively discarding a global launch.

“This is crap. This is an unbelievably bad game.” – Shuhei Yoshida after playing 2 hours of Demon’s Souls in 2008

Before the game was released, and the games playing public had a chance to deliver their verdict, Sony had already decided it was “way too hard” to succeed based on the opinions of marketing executives and the press, and made the significant decision to sell international publishing rights.

“What happened with Demon’s Souls was until very late in the game’s development, we were not able to play the game through. There were framerate issues and the network was not up and running. We underestimated the quality of the game and to be honest, the media in Japan did the same.” – Shuhei Yoshida to GameInformer, explaining the previous quote in 2012

As a result, the game was published in Japan by Sony, and no amount of “Japan Hardcore” success convinced them that they may be in the wrong. The North American publishing rights were sold to Atlus and the European rights to Bandai Namco.

So did they get the rights back?

– I feel one of Sony’s biggest software mistakes this generation was passing on publishing Demon’s Souls in North America and Europe. – GameInformer
– Absolutely! Tell me about it! 100 percent agree! – Shuhei Yoshida in 2012 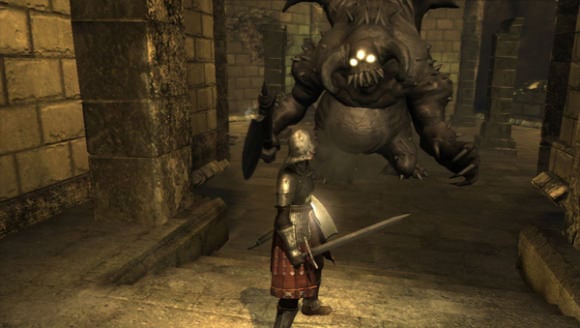 Screenshot from the original Demon’s Souls

Following the “cult hit” properties of Demon’s Souls and rolling into the success of Dark Souls, Sony realized they had made a mistake, and set about to fixing it. The details of the deal are unknown, but it is clear that this was worked out sometimes in 2017-2018, with the announcement of the simultaneous closure of all Demon’s Souls servers worldwide. This was also hinted at by Yasuhiro Kitao, who had a cheeky “Hello Boletaria” tweet around that time.

Fast-forward to 2019, and Miyazaki is asked about a possible remaster and deflects that it would be “Sony’s decision” and that he would not be opposed to another studio taking the project. Two months after that, the Bluepoint rumors started flying, with the studio stating:

We [Bluepoint Games] originally remastered Shadow of the Colossus for the PS3 and then remade it for the PS4. It’s the only one we’ve touched twice and to date it is our greatest achievement, so it’s easy to say that is our personal favorite. However, there’s no question in our minds that our current project will become the achievement we’re most proud of.

This leads us to last week, then the internet was taken by storm by rumors of a Bloodborne or Demon’s Souls remaster… and here we are! The dots connect, and there’s a clear picture of ownership and decisions that lead to the game becoming a PS5 title.

What is a Remake vs a Remaster?

Remaster and Remake are mainly referencing the engine, core aspects and ground work of a game. A remaster would imply a game’s graphics have been retouched, framerate improved, and maybe animations balanced, but the base character models and such would remain as they are and you should not expect significant differences with the original. A Remake is more of an “all bets off”, and a “re-envisioning” (which is what Bluepoint has called this) implies even more.

So what should we expect in the Demon’s Souls Remake?

Entirely rebuilt from the ground up and masterfully enhanced, this remake invites you to experience the unsettling story and ruthless combat of Demon’s Souls in unparalleled visual quality and incredible performance 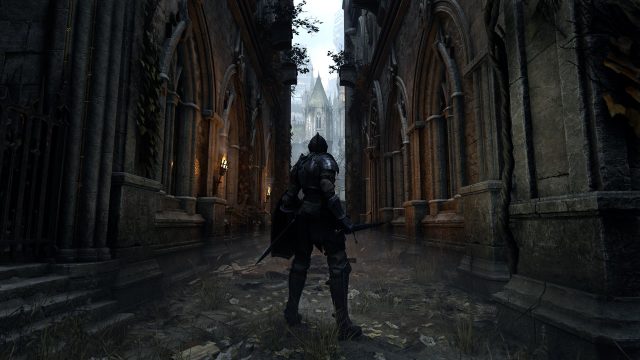 If the game has been “rebuilt from the ground up” as the Sony video description says, we expect to see 4k graphics and 60fps. I expect that the animations and models have been reworked to match this, and this would likely impact the game’s combat.

For those of you who are unfamiliar or don’t remember the original title, it was a lot less fluid than what you’ve grown accustomed to with Dark Souls, and it had several exploitable balance issues and enemy AI.

The game also ran on dedicated servers rather than as P2P, which allowed for the whole world to align to the entire playerbase performance. This is a feature I am very much hoping has been left in place, as the P2P aspects of Dark Souls and their netcode have left much to desire, giving you feast or famine moments of coop and pvp, and pretty much inventing the dreadful “lagstab”.

Will it be the same Game?

I did a frame-by-frame of the trailer to try and discern as much as possible regarding the content, so let’s have a look. The intro scene is clearly re-done, but remains true to the original work, with the crescendo of now nostalgic tunes letting you know what’s up. We then go to the Tower of Latria sequence soon after this boss, where you are elevated to new heights (much like your trip to Anor Londo in Dark Souls). We then catch a glimpse of the boss that will make you use That Sword “From” Dark Souls 3, and of course the incredibly deadly skeletons of the Shrine of Storms, and those Reaper bastards that killed me way more times than I’m going to admit to on this article. 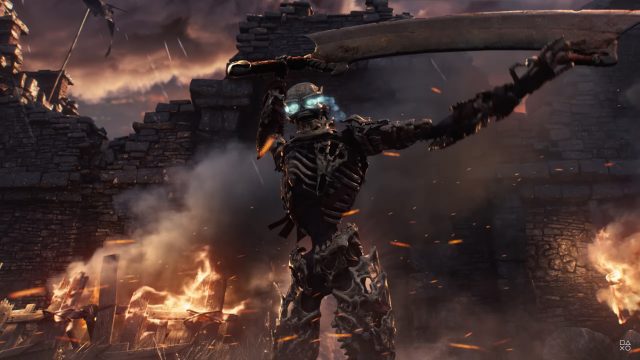 The impressive Tower Knight boss also makes an appearance, and we can see his arena remains largely unchanged. The last two enemies introduced are none other than Flamelurker and the fearsome Dragon God… but here there is a twist. I must have played this game for thousands of hours, as it became the obsession that essentially started Fextralife. Yet I cannot remember a scene like the one depicted for Dragon God… could we be getting a new setup for this boss fight? Or is this simply an intro scene to the attack on Boletaria? We’ll have to wait for info to find out, but I’m pretty excited!

How about the Broken Archstone

I’m going to go into full speculation mode, but we heard something about a “fractured mode” being leaked by Playstation themselves due to a bad video description that was later on amended. It is very likely that mode means something graphics-related, but to me it brought me straight to the mysterious Broken Archstone we could never visit and always wanted DLC or a Sequel for. Could this be the time? Will we FINALLY learn what lies within the “Land of the Giants” and what led to its breaking? You can have a little look at the cut content that dataminer Sanadask found for a teaser of what could come. 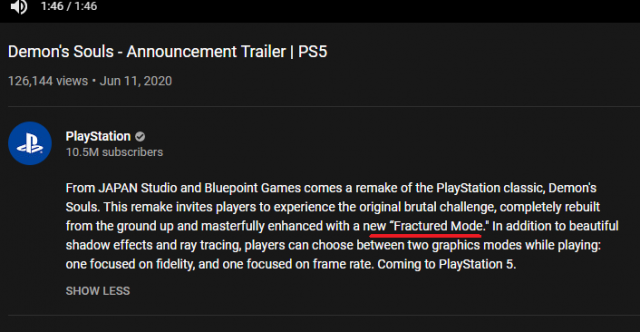 No Demon’s Souls Remake release date has been announced yet, but everything here seems to signal a PS5 launch window. Souls titles move consoles, and Playstation will want to have a good arsenal of content to push people to jump from PS4 to PS5. So, we’re going to bet our souls against Holiday 2020, together with PS5 launch, pending any delays to it from unexpected events.

So what do you think of the announcement? Are you hyped? Do you have theories on what changes might be? Do you have favorites that you hope stay the same, or things you hate that must be reworked? Let us know in the comments and refresh your game knowledge by visiting our Demon’s Souls Wiki.