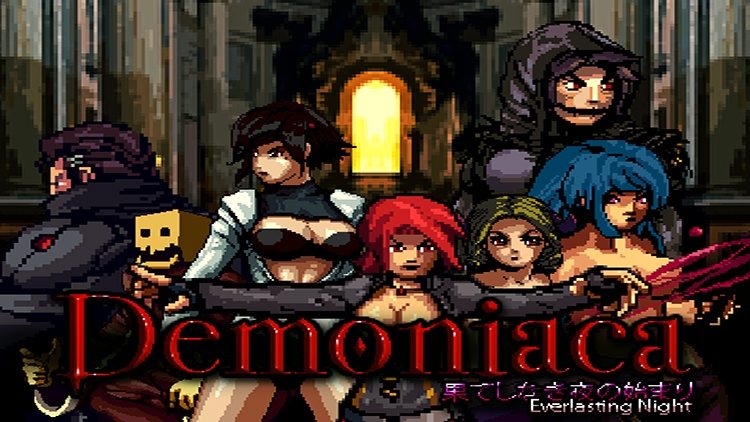 Anytime someone says the word ‘Metroidvania’ my ears perk up.  I am an unabashed fan of the genre, and personally rate Super Metroid and Symphony of the Night (SotN) as two of the best games ever.  Thus, I am very interested in any game in the genre, even more so when it claims to add something new or different. Demoniaca promises exactly this.  It promises a Metroidvania experience combined with a combat system based on King of Fighters.  When it works, the demo is incredibly fun to play.  Quite often though, my playtime was filled with frustration.  This is mainly caused by the many unfair deaths I suffered. What follows are my hands on impressions of the game that has recently entered a 2nd kickstarter round after a successful initial debut. Please keep in mind this preview is based on an alpha (as in not feature complete) build of the game.  There are aspects of the demo that I really dislike.  There are aspects of the demo that I really love. The game is not done, so all is subject to change. 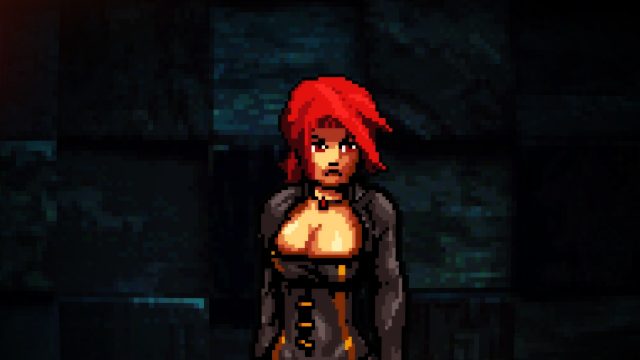 Yes lady, I’m not happy either that we’re back to the start.

In Demoniaca, the basic premise is that a clan of demons destroy a village in their attempts to rebuild the Tower of Babel. They sacrifice all its inhabitants, but one girl survives. Gutted and apparently dead, she wakes up upon piles of smoking corpses, surrounded in a pool of blood. Her own blood has been contaminated with that of the demons, giving her inhuman powers. She sews her mangled body back together and decides to avenge her brothers.

I’m honestly not sure here if the dev team just hasn’t really finished the story, or if it really is as sparse as it seems.  The main character is literally referred to as ‘Her’ in the credits at the end of the demo, and we get no other hints as to her name.  At the start we get a scrolling text intro, complete with some body horror shots, that confuses more than enlightens.  Some very basic editing (I’m sure they meant ancient and not ancestral demons) and rearranging would vastly improve the intro. 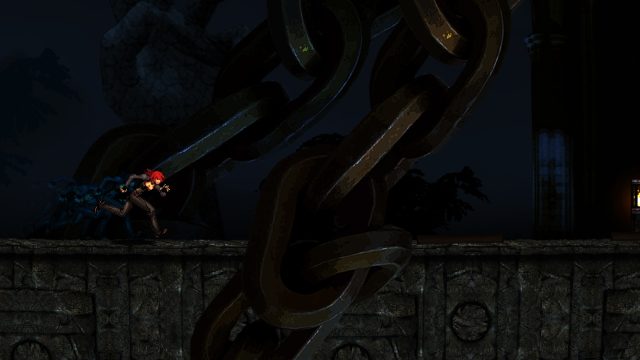 I approve of the SotN reference of running into the tower 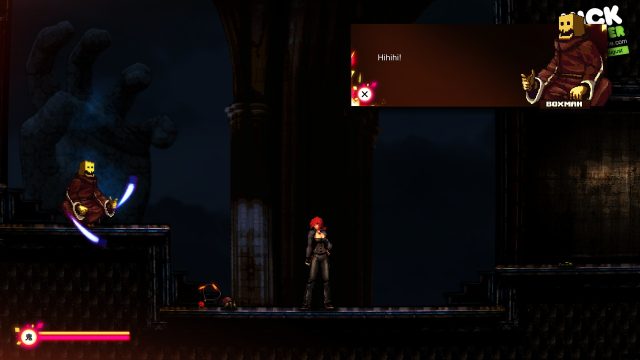 Just what are you, sir?

Here is where we hit a real mixed bag.  When everything comes together and functions as intended, it is a lot of fun.  It often doesn’t however, though at the moment that can be excused as the game isn’t close to being finished. 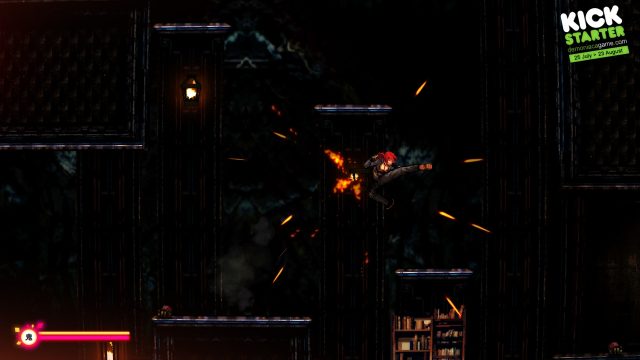 Take that you foul lantern!

The only way to play this game is with a controller.  While keyboard binds are included, they just don’t work well for my hands as positioned.  I also ran into an interesting (and infuriating) issue where the game was unplayable on my laptop.  Ancient or not, I expect it to run 2D games, but for whatever reason it had massive input lag.  That said, I noticed very few issues on my main machine.

On a controller, everything is setup decently, though you can’t rebind anything.  You have light/heavy punch/kick, along with a block and a jump.  The block I found utterly useless.  Not only did the enemies not really telegraph enough to use it on reflex, the few times I did use it it seemed to not work very well.  It is quite possible I was doing something wrong, but I found the best defense was a good offence. 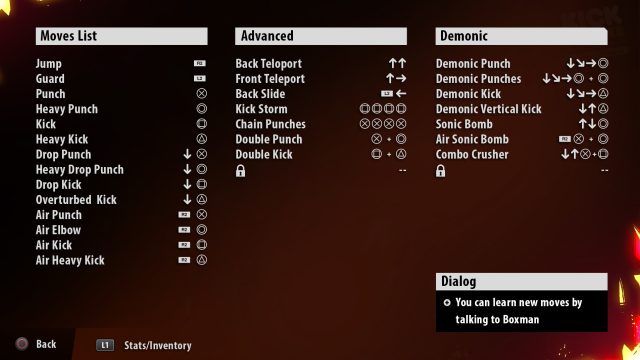 The combo system works well in game.  I had no more difficulty than I normally do executing them.  There are even a couple spots where using the teleports is really helpful for navigating the environment.  However, unless I was facing a really heavy opponent, it never seemed worthwhile to use the combos.  They all burn Demon Points or DP, which regens a bit slow, and seemed to be easily interrupted. 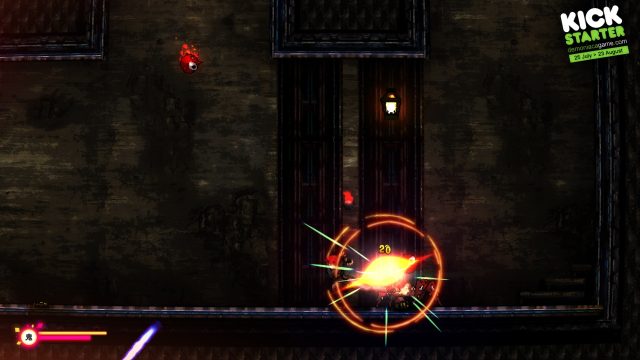 Instead, the attack I used 90% of the time was the low kick.  Really, there was seldom any reason to use any other attack.  It had the best range, could hit all enemies, and in the case of the mini-boss and two hard monsters, made it very hard to get hit.  Damage output wasn’t the best, but given everything else, it was the go-to attack.  I would still occasionally use other attacks for variety, and when everything game together killing the monsters was a lot fun. 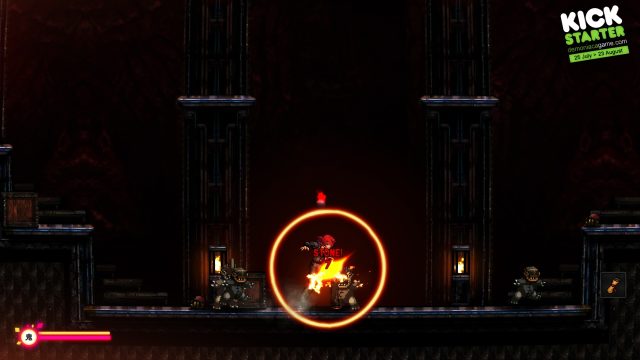 This room.  _Screw_ this room.

Coming together, sadly though, is an important qualifier.  Many time though things did not come together.  I had many, many unfair deaths.  In particular there is a room that is filled with enemies that can stone you.  You can easily lose half to three-quarters of your health if just one hits you because you’ll get stuck in a loop of being stoned.  Of course if you were already down in health, you die.  It is very hard to break out of unless you know exactly what to do. 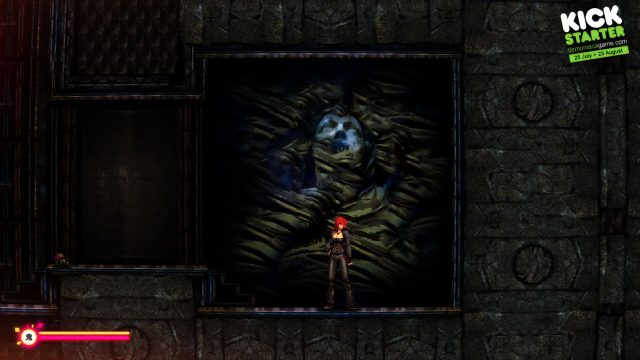 Part of the extreme frustration in dying is precisely because this is a demo.  Saving does not work.  You don’t realize just how critical something is to the overall feel and enjoyment of a game until it is gone.  It will be in the game, as they show off what the save room looks like, it just doesn’t work in the demo.  The other part, which fuels into the feeling of unfairness, is that the menu doesn’t pause the game. 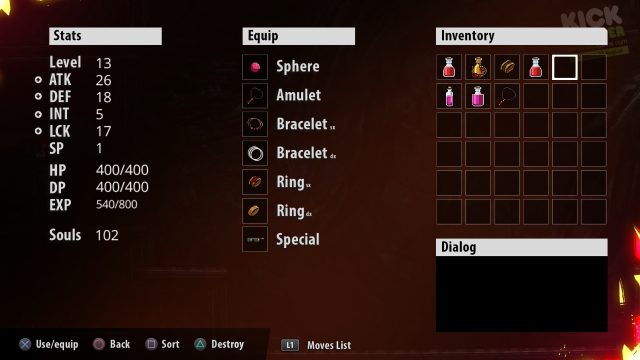 The monsters never, ever stop.  Even if you get caught in a bit of dialogue, the monsters can still attacks you.  In addition, monsters respawn, sometimes really freaking fast.  Compounding this is the game forces you to hold down X for half-a-second to activate a potion.  So you have to open your inventory, move the cursor to the potion, and then hold down X.  This does not work.  At all. Many times I could have saved my character if the game sensibly paused when entering the menu.  And no, there is no way to bind a potion to a button to use outside of the inventory system.  This is something that, in my opinion, must change in the final release. 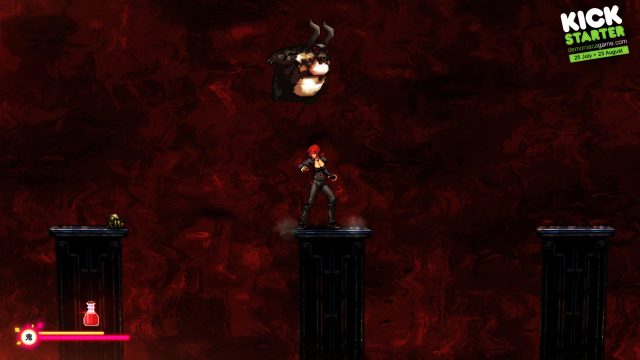 Alright, that’s enough whining about combat, how about the other pillar of Metroidvanias, movement and platforming?  It’s fun.  When it works.  There’s that darn caveat again.  Honestly though, for the most part navigation through the demo is a fun task.  The controls feels snappy, the animation is good, and most spaces are fun to navigate.  Until you get to precision jumping.

The jump is…odd.  The character has a really large jump arc and distance, but almost no air control.  This makes for some very frustrating jumping in some spots, as you’ll frequently overshoot your target.  This again falls squarely under the ‘it’s alpha, it’ll be tweaked’ category, but it’s worth mentioning.  If they don’t change anything about the jumping, it is really going to frustrate new players.

So, final verdict, is this a game worth keeping an eye on?  If you’re a fan of Metroidvanias without question.  While the opening scene had some intense body horror to it, it never really came up again, though the enemy designs were on the creepy side.  While the demo has a lot of flaws, there is far more potential here.  All we can do now is cross our fingers, and hope the devs can pull it off.