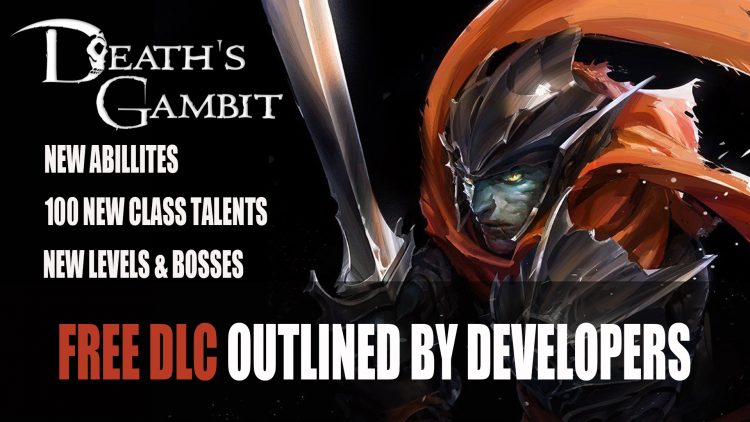 Developer of Death’s Gambit White Rabbit release a new developer update letting fans know how they’re getting on with the free DLC. According to the post, “most of the content is now playable”.

In a post on their Tumblr developer White Rabbit share that they won’t be attending E3 2019 as they are busy working on their DLC for Death’s Gambit which sets to be a biggie. The post also explains that it’s fast moving into the “polishing phase” and “most of the content is now playable”. You might be wondering what’s the hold up, they share that this update comes with a lot of new features:

The DLC is enormous. It includes almost 100 new class talents, many new levels, bosses, a metroidvania style map, new game modes, and weapons. It also progresses the story beyond our last conclusion.

This DLC will bring a lot of new additions to the title, not only weapons, classes and talents but even continuing the story. The update also will help with numerous fixes including animation for the Golden Drake Knight and Y’Inoth enemies.

The devs want to keep most of their content a surprise but have shared a new ability which allows players to set bear traps without any stat requirements. The damage dealt will scale by level. You can have up to 5 bear traps at a time, once you run out they will be replenished when a save point is used. There is also an ice trap version which is gained by using one of the new class talent trees.

You will also be able to double jump and use a “crash down” ability which can help you stumble on some secret areas that display a glowing sigil. These new abilities are part of what the devs are calling “Metroidvania” upgrades.

Adding some extra replayability to the game, each level has been altered in some way to account for the additional abilities. Meaning you can replay with some new places to explore.

While the devs have not shared when the update will be released, its great to see all these new changes and additions. The DLC sets to be a free update according to the dev post.

If you’re currently making your way through Death’s Gambit be sure to check out our Trophy Guide to aid you in gaining 100% of the game achievements. If you’re new to the game you also check out our New Player Help section.