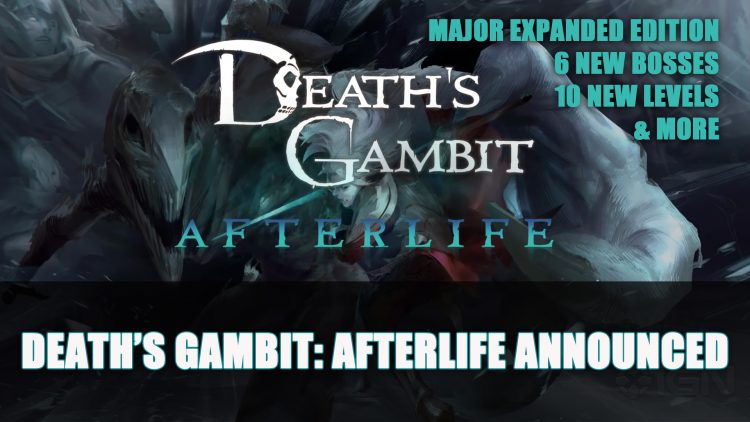 Death’s Gambit is getting an expanded edition called Afterlife, which was announced by developer White Rabbit and publisher Serenity Forge at the IGN Expo. The Afterlife edition doubles the side of the original game, adding new areas to explore, storylines, weapons, abilities and modes, plus tuning elements from the original. A new trailer featuring Death’s Gambit: Afterlife was released.

On the official Death’s Gambit Twitter account the developer has shared that there will be a number of additions including six new bosses, ten news levels, a revamped world/systems, twenty-two new weapons, a hundred talents, metroidvania upgrades, multiple endings, crafting and a world map. Phew that’s quite the generous amount of content.

No exact release date has been slated but the expanded edition so far has been announced to be coming to the platform Nintendo Switch. No news as of yet whether the Afterlife will be coming to original platforms PS4 and PC. [UPDATE – Additional platforms coming in 2021 according to the Death’s Gambit discord].

Death’s Gambit: Afterlife
The much anticipated expansion is coming to the Nintendo Switch 2021!

Death’s Gambit: Afterlife will be coming to Nintendo Switch, no release date as of yet.