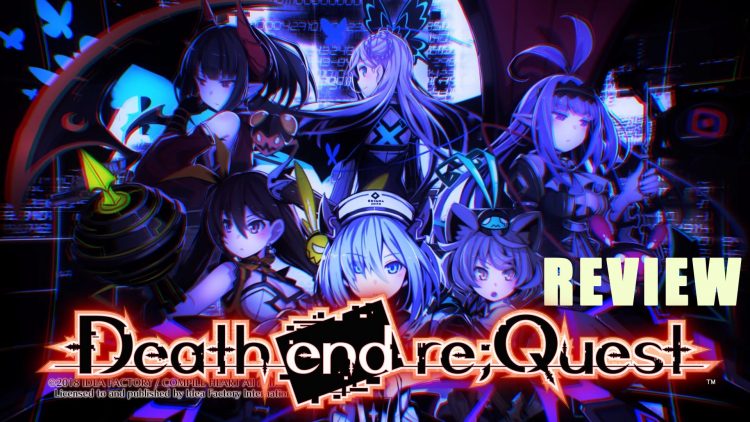 Dark JRPG Death End Re;Quest review: Enjoy anime-style genre-melding combat that includes turn based, fighting, shooting and slots. This game review covers everything a prospective player needs to know, such as: How does the game play? Is the story engaging? How about replayability?

In Death End Re;Quest, players will explore a real and a digital world to unlock the secrets to multiple endings that blend fantasy and reality. And here’s what we thought while playing.

As many JRPG stories, the start is straight-forward, as players encounter a computer that is quickly parsing lots of code, only to “bug out”. The player then dives into the computer, into cyberspace itself and finds its digital world is being corrupted. The game sets the tone with a haunting piano tune that changes the otherwise bright digital world into an error-ridden, dark and buggy nightmare.
From here, the game introduces several heroines, each with its own color and animal theme, as well as distinctive approach to situations. Each heroine will find challenges in the digital world, as well as their own backstory and influence on the game’s multiple endings. 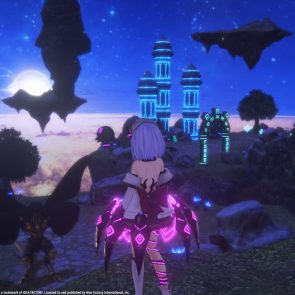 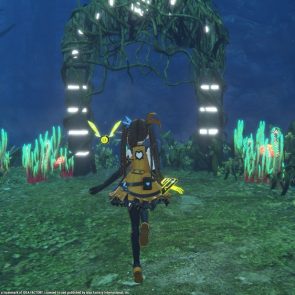 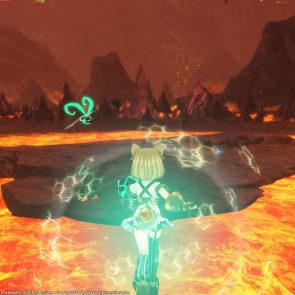 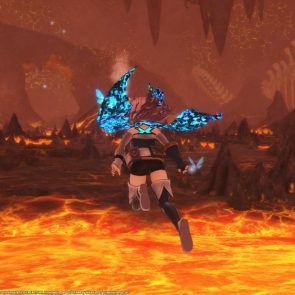 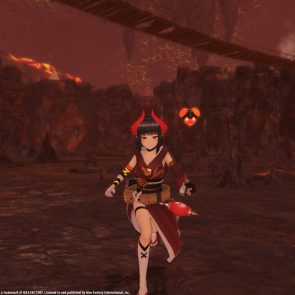 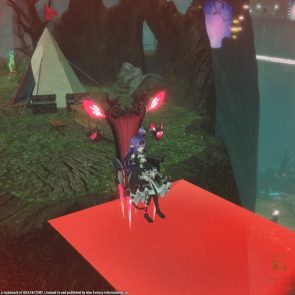 We are first introduced to Shina, who wakes up inside of World’s Odyssey with amnesia. She vaguely remembers she is an adventurer looking for the fabled Odyssia, a city in the skies. Despite initial appearances, progressing the story will reveal Shina’s true background and the darkness that lurks within it, while also allowing players to meet a close friend of hers and as both attempt to complete the game’s perfect ending.

When not in the digital world, players explore the world of Arata Mizunashi. The game sets constant peril for Arata during the investigation, but allows players to learn more about his daily life and his bonds with friends and associates. The story and setting provides a compelling experience of a normal life turning bizarre due to unforeseen events. 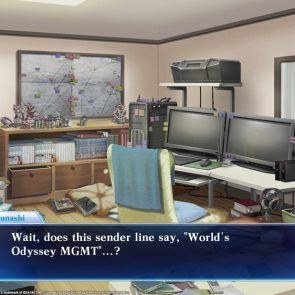 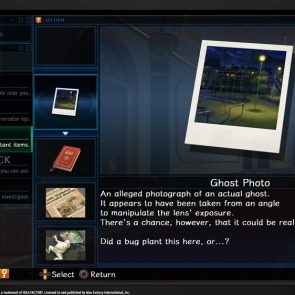 Regarding progression, players will be mostly handing Shina in the World’s Odysessy program until they reach an impasse. Then its time to swap to the real world and play as Arata. Exploring the real world and interacting with NPCs reveals clues about the world’s descend into the paranormal that will then be fed back into the game world. Solving these clues and obtaining this information allows Shina to progress further. Changes from Shina to Arata feel to happen naturally and at well-paced moments of the game, building up the suspense and atmosphere.

Players control Shina as she explores the world of World’s Odyssey, a VRMMORPG she worked on with Arata. Shina and her group of NPCs will encounter enemies in turn-based combat. Players will fight monsters by shooting them with an energy ball in order to start the encounter in a favorable position (increase speed and ailments immunity). The game thus provides a familiar formula for a role-playing game including: merchants, equipment, spells, typing (sun, moon, star) and powerful bosses. 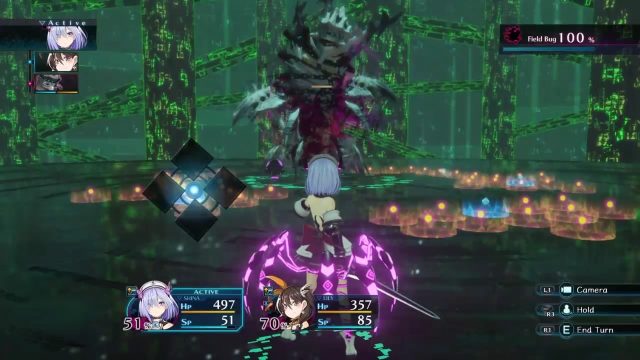 The game is not necessarily forgiving, and players will meet their demise often. However, and unlike other titles, death comes with its own rewards and lessons. Exploring everything and seeing how going down one path will affect the game is a tempting and rewarding experience, even if it ends in tragedy. Thus, we feel players are encouraged to explore all paths and options despite their apparent cost, and this provides great replayability and a fantastic feeling of impact and consequence to your choices. 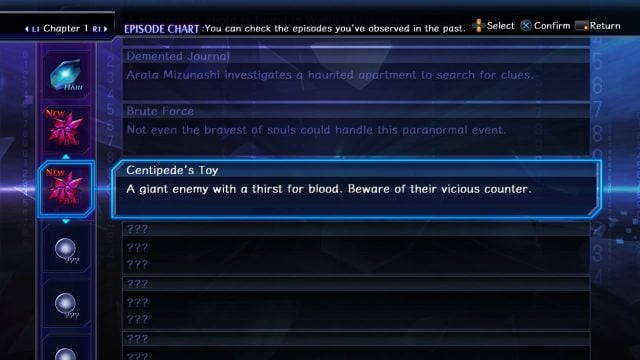 Death and Re;Quest has several innovative ideas and mechanics that set it apart from similar titles. These include the bug system, glitch mode, triact command, and the knockback system. A heavy and central theme is the introduction of bugs in the digital world of World’s Odyssey.

Glitch Mode provides an increase in stats and allows a powerful attack to be dealt in the triact command. The triact command allows players to use 3 actions in one character’s turn giving players a slew of options on approaching each fight.

Using the triact system allows players to knock an enemy into another enemy, wall, or at another friendly character to deal extra damage to them. At times, this will look like a chaotic ping pong game yet is so satisfying to pull it off successfully. 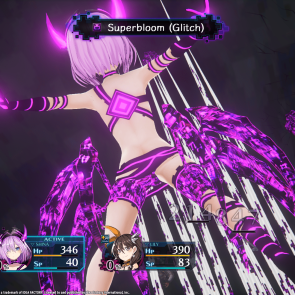 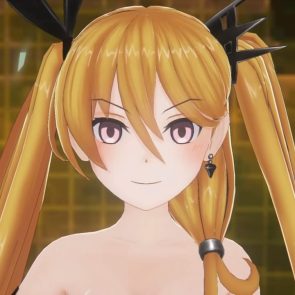 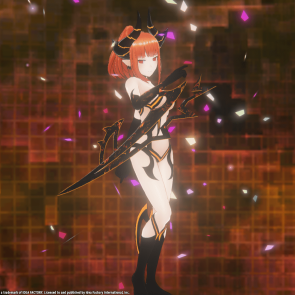 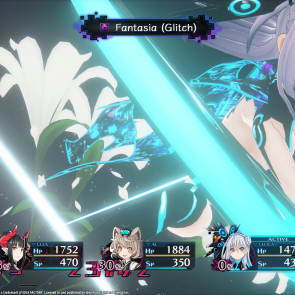 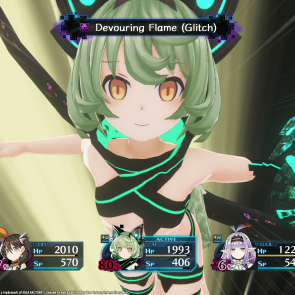 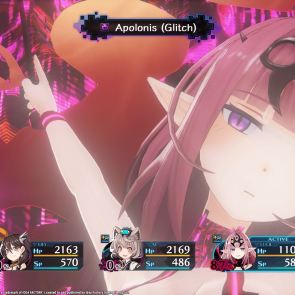 Like many RPG games, Death End Re; Quest has a typical status screens displaying stats, equipment, accessories, and costumes for each character. The screens help provide insight on how to optimize a character base on their strengths. (Magic character vs Strength character). 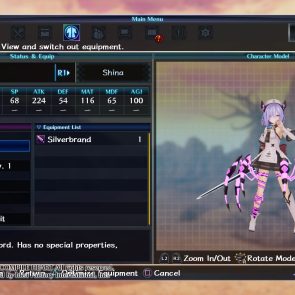 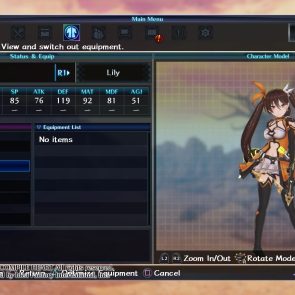 The atmosphere of Death End Re:Quest is hauntingly beautiful. Locations are often bright, colorful and serene. The excellent world design gives players a great contrast of the intended digital world and the corruption plaguing it. The contrast between the gorgeous environments and the dark and gruesome corruption succeeds in making players care about fixing the errors.

Voice Acting for these type of games is typically scarce, so it was a welcome surprise to see excellent voice talent that added emphasis and eloquently delivered dialogue. This is accompanied by a matching music score that sets the right tone for each situation encountered. 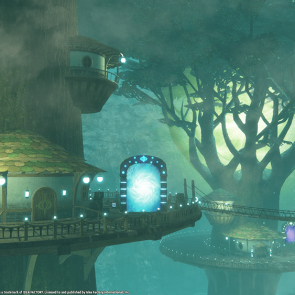 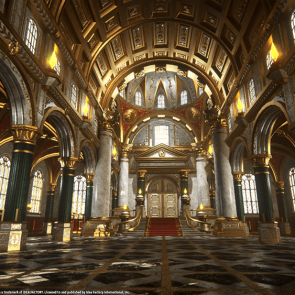 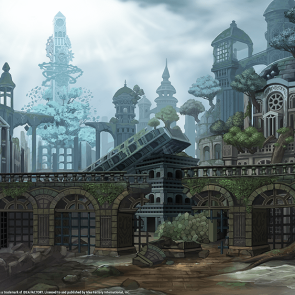 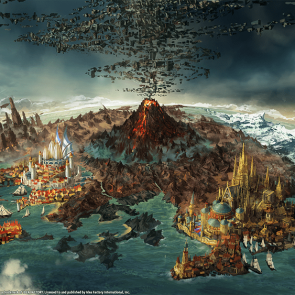 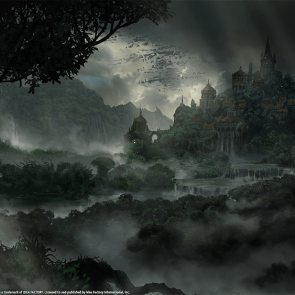 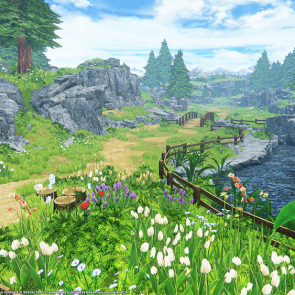 Although the visuals doesn’t push the PS4 limits, I found the artistic style of the game to be quite charming and a nice contrast to the darkness of the game. Graphics are probably the weakest aspect of the game, and there is a noticeable difference between cutscenes and the game engine. There are also some strange object rendering issues, but nothing that was terribly off-putting or game breaking. 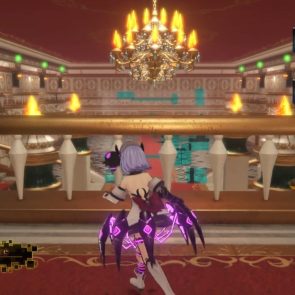 If you are a fan of anime and JRPGs, this is an excellent title that does well at its core RPG elements and provides plenty of exploration and story choice. Seeking the consequences that lie down each of the many paths available is an enjoyable experience.

The game’s replayability lies in the ease of tried and true RPG mechanics and exploration, and is only slightly hindered by some boring side quests that might feel like a filler. But, whoever watches anime is plenty used to those and Death End Re;Quest is a well-rounded, fun title for JRPG anime fans.

We have Death End Re;Quest guides here! Or you can check out more Reviews

8.5
Summary: A game for anime JRPG lovers, Death End Re;Quest delivers a good story with plenty of choice and exploration, with a beautiful design backdrop. Providing a good rpg system with plenty of replayability and multiple endings, the game is good value for fans of the genre.
Story & Setting (9)
Gameplay (8)
Audio and Visual (8)
Replayability (9)
Pricepoint (8.5)