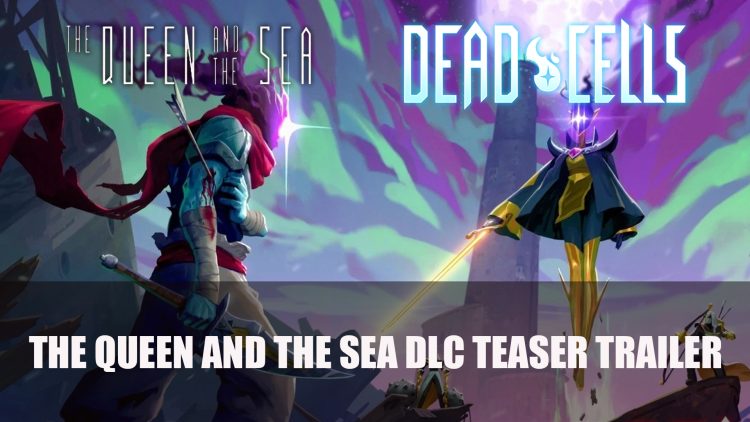 Dead Cells next DLC The Queen and the Sea gets a teaser trailer previewing the enemy to join the game.

Dead Cells has been ramping up the content recently after releasing their free update 26 which added a number of crossovers with indie titles such as Hollow Knight, Blasphemous, and more. The next DLC coming to the game takes the title The Queen and the Sea. The latest teaser trailer hints of a new evil in town, who sends her minions to take down The Prisoner, Dead Cell’s main character. The latest tweet from the developer shares this is the epic conclusion to the DLC Trilogy.

The trailer reveals that The Queen and the Sea DLC will be releasing for platforms PS4, Switch, Xbox One and PC via Steam in Q1 2022 for $4.99 USD. The DLC will add alternate biomes to explore at the end of each run which are the High Peak Castle/Derelict Distillery and Throne Room according to the Steam page. Developer Motion Twin tease that this biome is a “twist” and not a “standard-issue Dead Cells level you’re used to” according to an article by Kotaku. We can only imagine what’s in store for player this time round, with this intriguing comment. Players will also gain new weapons and of course face new enemies.

Battle your way through sunken shipwrecks, scale a soaring lighthouse and confront your deadliest foe yet. If you manage to make it through all that, maybe you’ll finally get off this god-forsaken island…

This late-game content will give you an alternative to the High Peak Castle/Derelict Distillery and Throne Room biomes.

There’ll be new weapons and enemies to play with of course – we’ll be putting out more details as we get closer to release day.

In case you missed it you can find out who else has joined Dead Cells in Update 26, in the form of weapons and outfits.

Dead Cells is currently available to play on PC, Playstation 4, Xbox One, Nintendo Switch, iOS and Android. The Queen and the Sea DLC releases in Q1 2022.

For more news check out Cyberpunk 2077’S Next Major Update Will Arrive Alongside Next-Gen Versions and Marvel MMORPG Currently In Development By The DC Universe Online Team. Want to know what’s releasing this month? Head on over to our Top 5 Upcoming RPGs Of December 2021.