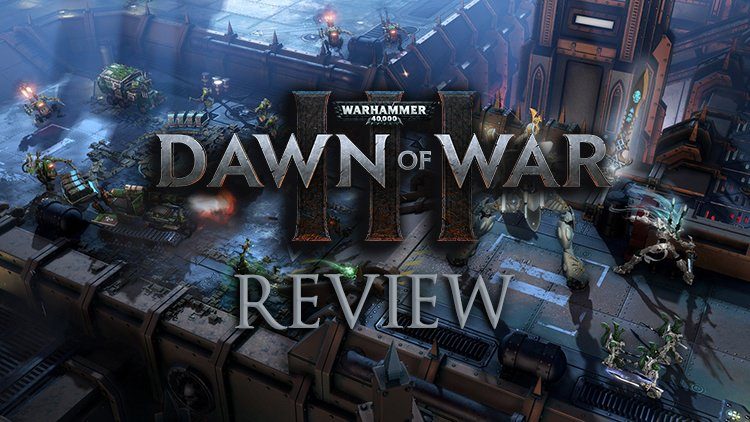 I have always been somewhat of a closet Warhammer/Warhammer 40,000 fan for as long as I can remember. Chaos Gate was the very first experience I had with the iconic table-top game that has since been turned into turn-based strategies, real-time strategies, RPGs, an “FPS” and now finally a MOBA. Since Chaos Gate’s release in 98′, several dozen Warhammer video games have been created and published, most of which I have played. Having done that, I can confidently tell you that you almost never know what you are getting with each game because they are generally all different. The one exception being of course, Dawn of War.

When Dawn of War released in September of 2004, it had tremendous shoes to fill because of a popular game you might have heard of: Starcraft. Starcraft was simply the best RTS ever created up until it handed the reigns over to Dawn of War 6 years later. What made Dawn of War so great was that it took a similar formula to Starcraft, but added squads in place of single units and also added cover dynamics and morale that made combat MUCH more strategic. This system was so well received that a couple of years later Relic went even further with it when they developed Company of Heroes, which currently is tied for second all time on Metacritic’s RTS list (behind Command and Conquer). 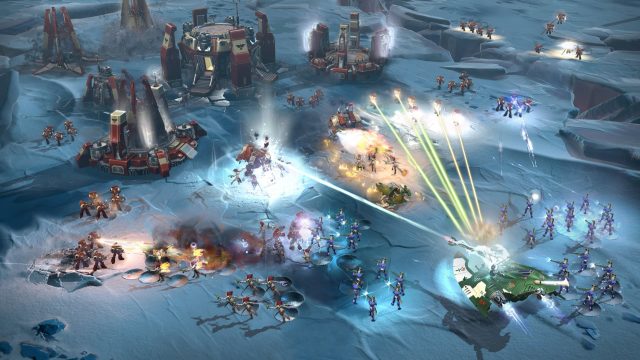 With the development and publication of Dawn of War II, Relic attempted to scale back the size of battles in favor of more player control and tactics. Although they succeeded in some ways, they failed in others and ultimately the game suffered for it and it is widely considered a disappointing sequel. Many players saw Dawn of War III, not unlike Dark Souls 3, as a chance for redemption and an opportunity to make the “proper” sequel that we all knew was possible but did not receive with the second installment. Unfortunately, not only did the game fail in this regard, but Dawn of War III is a shell of its predecessors and feels like Relic simply made a different game and slapped the title upon it. 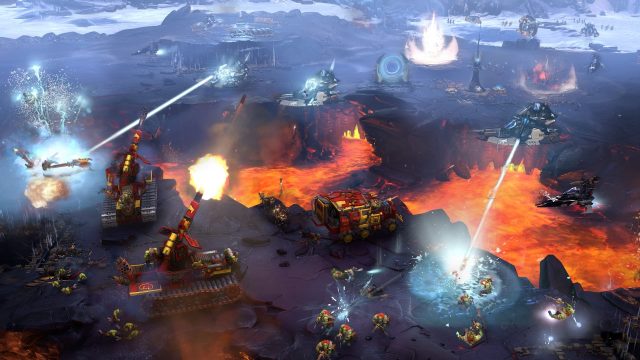 Players begin the game as Blood Ravens, landing on the planet Cyprus Ultima against the wishes of the Imperial Inquisitor to help defend an Imperial Knight house from an Ork assault. You command the Blood Ravens Chapter Master Gabriel Angelos, one of the game’s many Heroes that has special abilities and skins, all of which can be unlocked as he levels up. As the story progresses you learn that the Spear of Khaine, a weapon of legendary power, is discovered on the lost planet Acheron. You will alternate fighting as each of the three factions: Space Marine, Ork and Eldar as each faction vies for the Spear. And while this is certainly not the worst way to tell a story, I found it disappointing that I could not play the Space Marine campaign and then the Ork and Eldar if I wished, but was forced to play round robin.

The stories of Warhammer 40.000 games, while I’m sure are extremely important to most players, I personally never found all that intriguing. I fell in love with the universe because of the unique features, factions, customization and sense pride you take in your army as you outfit them, customize them and finally control them in battle, so it is hard for me to judge how the story compares to other Warhammer games. I would simply say that if you enjoyed them in past games, then you will most likely find the story sufficient but not imaginative or exceptional. 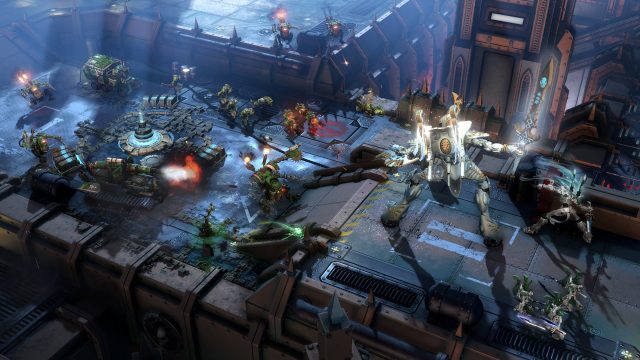 The gameplay of Dawn of War has always been the core element, like many games, that makes it worth playing and playing and playing. Unfortunately Dawn of War III takes the tried and true formula from the previous games and throws them mostly out the window, which is a HUGE disappointment. Relic has taken the focus of the game away from cover, morale and battle tactics and instead into something that loosely resembles a MOBA. While you will be in control of your army, players will be forced to pick and chose from many of the games Heroes, that will immediately remind you of League of Legends or Heroes of the Storm, and level them up to unlock abilities and make them stronger. 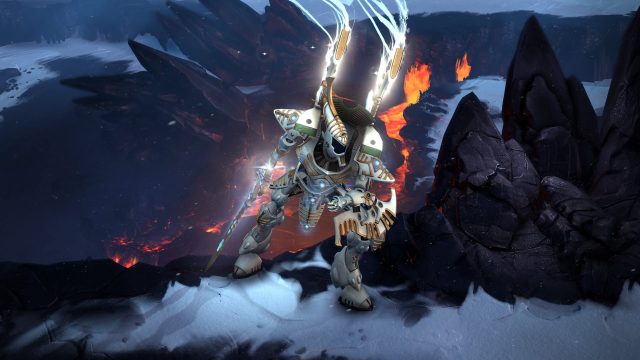 In Dawn of War III, Heroes are so powerful that often your other units are just fodder while the real battle is dictated by 1-3 units on the entire field of play. To make matters worse, nearly every unit has a special ability that it can use, including your Heroes, which have many. How is that worse you say? Because you simply cannot manage that many units on a battlefield, have to locate the specific one whose ability you need, and use it in a timely manner without being decimated in the 10 seconds that takes to do. Imagine playing League of Legends, but instead of controlling 1 Hero, you controlled 3…and all the soldiers marching to the opponents towers. That gives you some idea what combat in Dawn of War III is like.

Aside from the exceptionally mediocre combat, much remains the same from past games. You will follow along in a campaign, getting new units and structures with each map you complete, which is nice.  Along with that, you will gain access to new Heroes, which you can unlock with currency you obtain from completing objectives. You can also unlock Doctrines that give your army a permanent buff as long as you keep it equipped. These can do anything from increasing melee damage of your units, to increasing range the fire rang of units or even upgrading buildings to deal damage to enemy units. This is a nice little improvement to spice up the strategy element of the game, but sadly you will hardly even notice the difference when playing with or without them. 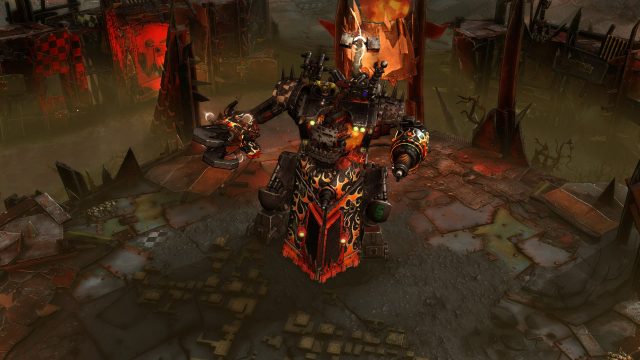 Dawn of War III has changed their multiplayer mode to a bit more like what you’d expect from a MOBA because of the Heroes. Players can play 1 vs. 1, 2 vs. 2 or 3 vs 3 game types and while the 1 vs. 1 can be extremely fun, the team-based multiplayer is where Dawn of War III really shines. It is just too much fun teaming up with a friend or two and building up your armies and Heroes and vying for control of the central point so you can gather your troops together into one massive army and storm the opponent of your choice. The key to these games is the center, hold that and you hold the keys to  victory. I didn’t get to play a lot of games, but I really enjoyed the ones I did play and even managed not to suck too hard. 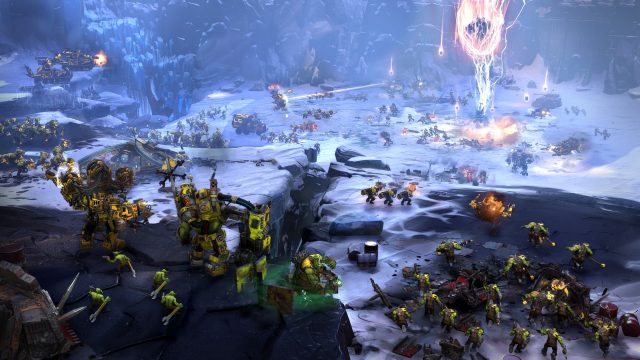 Visually, Dawn of War III is probably somewhere in the upper middle of the pack when it comes to its graphics and artwork. It’s certainly not an eyesore but I felt the units could have been better. How exactly do you make units in an RTS look better? I’m not 100% sure to tell the truth, but you just don’t get the same feeling as you do from games like Company of Heroes or Starcraft II. 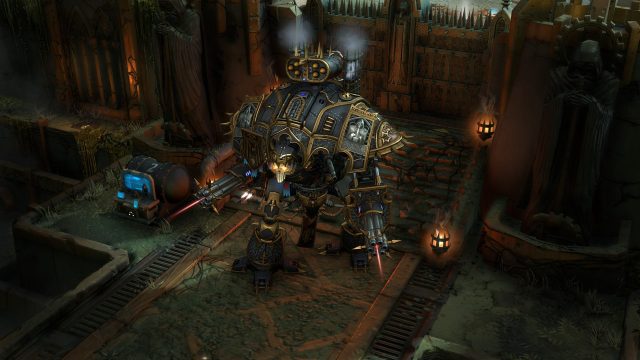 On the plus side, the environments you explore and play in are extremely well done and feel alive and active, not just a static map to be played upon. There are environmental effects such as snow, fire, smoke, moving machinery etc on many of the levels and it really helps to immerse you in the Warhammer 40,000 universe. Unfortunately, because of the lack of a cover system you don’t pay as much attention to it as you did in previous installments because where your units are positioned doesn’t play much of a factor. 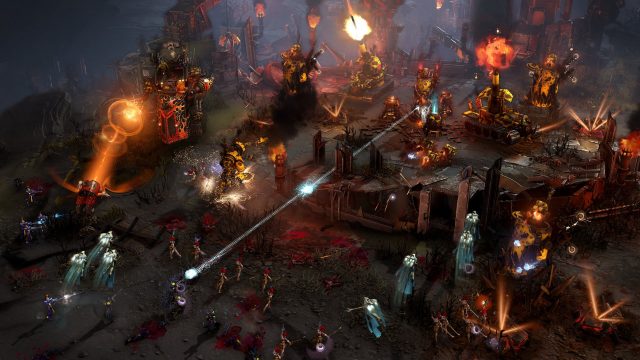 On the Audio side of things, you really can’t ask for more. The music and sound effects in the game are stellar, so much so that you almost feel like you’re playing inside a movie. Heroes speak to one another, bullets and explosions all over the place, and epic music makes your heart pound and gets you ramped up to play. In short, you feel like you are in a war film and you’re the cameraman, capturing it all. This is definitely the best aspect of the game’s production. 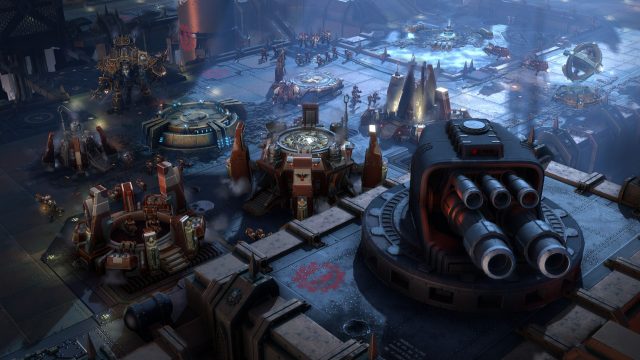 7.4
Summary: For a game whose namesake implies a certain standard of tactics and strategy in an RTS, Dawn of War III is a bit of a bait and switch. While Dawn of War III on its own is a good game, you have to be completely objective in order to see that and many long time fans of the series won't. It remains to be seen if this iconic branch of the Warhammer 40,000 franchise is heading in a new direction entirely or if this was just a bad judgment call, but I believe many players will be skeptical of a future release and Relic may not be able to rely on their brand alone to sell their next installment, should one ever be developed. For 59.99 this game is a bit overpriced and I would wait for the next Steam sale to pick it up for around 39.99 or less.
Story & Setting (7)
Gameplay (7.5)
Audio & Visual (8)
Replayability (8.5)
Price Point (6)