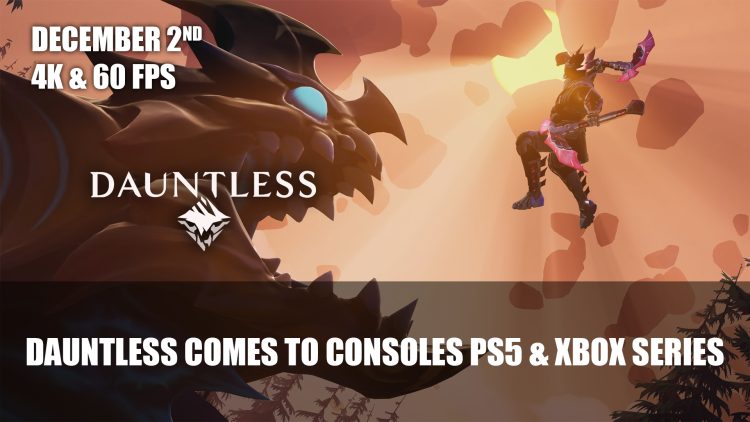 The free-to-play monster hunting game Dauntless will be coming to consoles Playstation 5 and Xbox Series X|S on December 2nd 2021.

Developer Phoeniex Labs has announced they will be bringing the free-to-play monster hunting title to consoles Playstation 5 and Xbox Series X|S on December 2nd 2021. This joins current platforms Playstation 4, Xbox One, Switch and PC. Both Playstation 5 and Xbox Series versions will also feature cross-play and cross-progression, as well as featuring improved visuals such as new lighting, atmospheres, improved view distance, volumetric fog and other effects. The environment textures, trees, water, grass and shadows have also been reworked.

In addition to graphical improvements, 36 trophies and achievements including a new Platinum trophy for Playstation 5 will be added. The PS5 version will support dynamic adaptive triggers and integrated sound through the DualSense wireless controller, which also features 3D audio and Activities.

The Action-RPG Dauntless was originally released in Early Access for PC in 2016, fully launching in 2019. The title supports cross-play and cross-progression with both consoles and PC. Dauntless features character creation, Behemoth hunting, crafted weapons, upgradeable gear, multiplayer and more. The game is free-to-play and also has a Hunt Pass for those who want to gain more bonuses and rewards.

If you want to know what we thought of the free-to-play monster hunter game be sure to check out next Dauntless Official Launch Overview: Free To Play Monster Hunting.