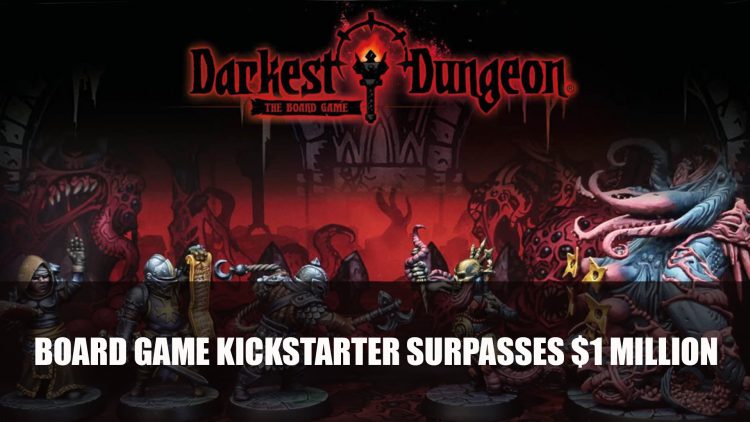 Red Hook Studios launched their Kickstarter campaign for the board game version of Darkest Dungeon, which was met with great enthusiasm from fans as it surpassed $1 million in backing in just one day.

Darkest Dungeon Board Game Kickstarter Surpasses $1 Million in One Day

Red Hook has also launched a Kickstarter for Darkest Dungeon The Board Game, which currently had 15 days to go and had already reached it’s original goal of $300,000 USD within 35 minutes of going live. It then surpassed $1 million milestone in just one day, now reaching 1.3 million in backing.

Darkest Dungeon: The Board Game is a dungeon crawler designed for 1-4 players. It’s based on the video game of the same name which release in January 2016. Red Hook are now producing a physical tabletop top version which will contain a rulebook, 72 minatures, 32 dice, 12 double sided room tiles, 16 hero boards, 4 skill boards, 1 hamlet board, 3 main dashboards, 10+ dungeon cards, 400+ cards, and 200+ tokens. Those who back the Dungeon Pledge for $100 will also gain a free Musketeer Mini. The Crimson Pledge comes with all that is previously mentioned plus the stretch goals for $150. There are also optional additional expansions available for purchase.

You can check out some of the official features below:

In recent news, Red Hook has announced the sequel, Darkest Dungeon 2 will be launching next year in 2021.

Darkest Dungeon: The Board Game is currently on Kickstarter and the campaign will end in 15 days, so if you want to help back the project be sure to get your pledges in before it ends. According to the page the first backer to receive the full the game will be November 2021.

For more news be sure to read next Darkest Dungeon 2 Coming To The Epic Games Store Early Access In 2021 and Grime The Unforgiving Action-RPG Gets Gameplay Trailer.