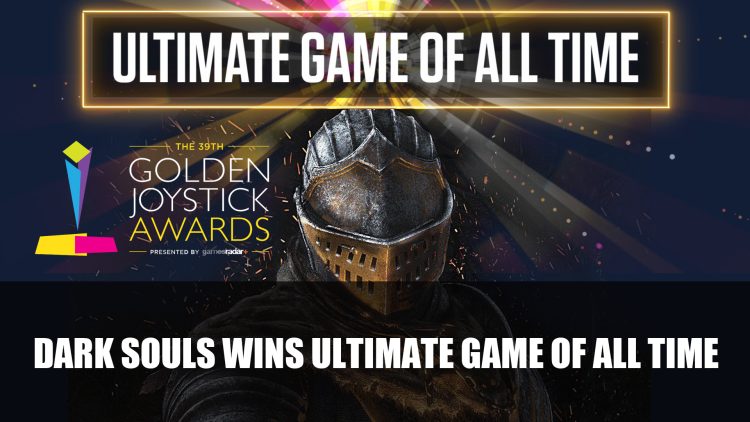 The Ultimate Game of All Time award has been won by Dark Souls for the Golden Joystick Awards 2021.

The Golden Joy Awards 2021 have awarded Dark Souls the title of the Ultimate Game of All Time. The award was voted in by the public, as part of the celebration that marks 50 years of gaming. The category seems to have taken a wide look at genres as the contenders included the likes of Tetris, Metal Gear Solid and The Last of Us. Taking second place was Doom, followed by The Legend of Zelda: Breath of the Wild which came in third. Elden Ring also snapped up the award for Most Wanted Game.

While FromSoftware weren’t able to be there in person to pick up the award, but on behalf of both From and Bandai Namco, PR, communications & events director Wouter Van Vugt accepted the award. FromSoftware are in no doubt busy with the launch of Elden Ring, which was recently announced that the release will be delayed to February 2022.

You can check out the full list of nominees for the Ultimate Game of All Time below as well as winners for all categories:

What do you think of the nominees’ list? Would you have voted differently? Let us know in the comments below. You can also vote and check out the nominees for The Game Awards 2021 which will be happening this December. Elden Ring has also been nominated for Most Anticipated Game for the second year running.

For more news be sure to check out next Genshin Impact New Playable Characters Revealed Shenhe & Yun Jin and Elder Scrolls Online Blackwood And Base Game On Consoles Now On Sale.