On The Strength Of Its Community

Ask anyone who has been playing the Souls’ franchise (Demon’s Souls and Dark Souls) from the beginning, and they’ll tell you how important the community has been in terms of injecting longevity into the game.  What began as a loose-knit group of dedicated players who frequented the Demon’s Souls forum on the PS3 boards slowly grew in size, eventually migrating to a dedicated wiki and forum.  Sharing their passion for what many consider to be the finest game franchise of this generation, they share strategies, builds, and gameplay stories with each other and newcomers to the games.

To understand the Dark Souls Community, you have to understand the game.  It is relentless, punishing, unforgiving, and does not reveal its complex layers willingly.  The fellowship which is shared by the community was born from a desire to unearth tactics, lore, and information, then share it with others in the hope that everyone’s journey might be a little easier.  In short, they help people because they’ve all been there, up against a wall, facing a seemingly unwinnable battle.  Then some piece of advice shared by a member gives you just enough edge to get out from whatever hole you’ve dug.

People sometimes drop off the forums for a while if they are playing something else, but DkS always lures you back with its dark kiss, and the promise that if you try something, anything, different, you’ll rediscover the game in ways you’ve never imagined.  Members suggest new challenges all the time, and their imaginative ideas always spark freshness long after the game should have gone stale.

It’s hard to say whether or not the developers understand the importance of the communities to the success of this franchise.  Demon’s Souls could have been just a little niche title, a footnote in gaming history.  But passionate members of the community who migrated over from the PS3 forum made sure that the franchise would be elevated so something more. 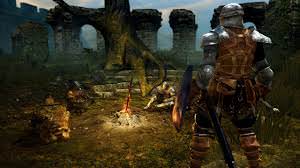 Finding new ways to enjoy Dark Souls has always been a goal of the community.  Whether making a cosplay build, or creating a unique PvP covenant, members wear their love for this game proudly, for the whole world to see.  The Dark Souls community is a microcosm of any collection of people.  Some PvP as Darkwraiths because they thrive on invasions, pushing people to defend themselves.  Others counter this with a dedication to co-op play in the Warriors of Sunlight, providing a sort of Yin to the Darkwraith’s Yang.

Although PvP is not policed in any organized way, a sense of etiquette and decorum has evolved independently of what the developers had in mind.  For example, in the original game, Demon’s Souls, veteran players determined that a build could be optimized at level 120.  Over time, this became a PvP norm.  Nothing in the game suggests this is required, but community members new and old accepted it.

In Dark Souls, when “griefers” became an issue (players who acquire high level, endgame gear, but remain at a low level to invade new players), many in the community began creating anti-griefer builds, essentially doing the same thing, but offering to co-op with new players to help them fend off such predators.  All of this was done with a simple goal:  to make sure that new players are given a fair opportunity to experience the game, and to stick with it so they can find out all it has to offer.

Through word-of-mouth, the community has spread deep praise for the Souls’ franchise, and ensured that gamers in general get a sense of buzz surrounding the upcoming sequel, Dark Souls 2.  The months following its release next March will be a time of great discovery as everyone works to dig beneath the deceptively simple surface and find out all the secrets.  No other game in recent memory has been able to benefit from the influence of this level of passion from community members.  This trend illustrates just how important they can be to the success and longevity of a game.