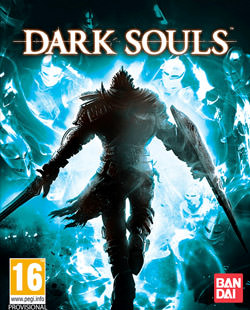 So to begin, I will give an incredibly brief telling of how I found out about this game in the first place. My friend, whose nickname is Commander Shepard (the name’s not important for youto know), is basically my go-to friends for game, specifically RPG, shenanigan talks. During marching band season last year, he’d spin the tale of this game he’s been playing recently, mostly spoke of this one enemy he had encountered early on who you’re not strong enough to kill, per say, that guarded the bridge to some shortcut. I later learned this game was called Dark Souls, and bought it, wanting a real challenge for my epic video game skill-ishness. Soon after I bought it, I realized Dark Souls II wasn’t too far away, specifically five months at the time. So I vowed that I would defeat this new game before the release of the next one, or die trying. And I indeed did die trying, many, many times.

Now, I must say that this’ll probably ruin the game for those who haven’t played it, so don’t read this if you want to keep your DS virginity. I’ll even put up a blockade to block out DS virgins.

Now that we’ve successfully waned the demographic down to Dark Souls patriots, we will begin. I assume most of you have played this game, so I won’t bother explaining everything that we happen to talk about. I could try Skare’s Demon’s souls format, but eh. We have larger fish to kill, and as we’ve said, the DS virgins are gone.

So without further ado, we shall set sail… on land… to an asylum…………

I was too excited to consult the Commander (Shepard) as soon as I received the game, so I went into customization blind (Which was a very good idea). My usual beginner strategy for fantasy is to tank for days, so I picked the knight class, and spent an overzealous amount of time on making my dude’s face just right… (“Prepare to Prune”, customization edition) As for gifts, I had literally no idea what anything was, but I’ve heard that Humanity was really important, so I picked the Twin Humanities as my starting gift, which was probably the third most important decision I made the entire game. As for my name, it only made sense that my name was to be Superdude8. With my character finally finished, I began my sure to be successful trek into the land of rainbows which I’m sure will welcome me in the opening cutscene.

Oh, dragons. And a cell that I’ve been thrown in for no apparent reason. Well, there’s a significant lack of rainbows in this dank area. Luckily, some knight decided to hiding keys within bodies was a brilliant exit strategy. Thanks, Oscar! Where would we be without your magical Estus/key finding abilities?

I began the game as most people do, “Oh gosh, this is so easy; these enemies are laughable; maybe I’m the hardcore RPG player this game has been waiting for!”

I move along, walking through the door to that’s-one-mean-n’-big-fella-ville, and promptly run screaming into the next room. Cautiously continue onward, hit by a rolling ball, and eventually come to see the rolling ball sized hole in the wall. There I meet Oscar, properly, and watch him spin the tale of the undead, and vow to continue in his stead.

The hollows up ahead prove to be significantly harder than the ones before Mr.BigandTall, what could have caused such a steep difficulty rise? Here I learn that you can change your gear, and familiarize myself with the items screen. (Let pretend this happened instead of me running screaming from three Hollows)

Reach the fog gate with my sexily fashionable Longsword in hand, I drop down to confidently face Mr.BigandTall. I found it unfair that I could take fall damage, AND BigandTall could swing at me whilst I was staggered. This cycle continued until I realized that buttons can be used to do things, specifically, rolling.

I fat rolled to safety, and expertly died to BigandTall two times before ending his rein on the asylum. Me:1  Bosses:3

So I took a trip with Mr. NotSnuggly to Lordran, and was rudely thrown off after reaching Firelink Shrine. Crows have absolutely no manners, I tell you.

So I explored the area, although I completely missed the steps to New Londo AND the Catacombs, so it was more of a skim-search. I learned through Sir Crestfallen that there where actually “TWO bells of Awakening. One was above, in the Undead Church, and one far, far below, in the ruins of Blighttown.” Churches sounded infinitely more inviting than blights, so I headed upward.

I made it through the first leg of the trip with ease, finding my way to the bonfire in the burg. I then proceeded to die many times on the approach to The Grumpy Old Troll. (Who, for some strange reason, lived on TOP of the bridge. From Soft has no respect for traditional fairytales)

Eventually, I did indeed make it to the bridge of the Troll. I died to him on my first bout, having not accounted for the archers placing arrows into my delicate spine. On the second try, (which, mind you, came much, much later) I deployed a new stratagem, which I believe the dutch call “cheating”. This strategy entailed exploiting his backstep, hoping that he’d jump off of one of the broken spaces in the bridge. This proved successful. Me:2  Bosses:4

I merrily danced to the new area, where I was told I’d meet the Commander’s favorite character, and the Adherent to Sunlight, Solaire. I happily gobble up his dialogue, and take the Soapstone for my trouble. In high spirits, I skip across the heavily scorched bridge, not noticing the scorches, or the drake in the distance.

“FWAAAA” said Mr. Hellkite, heavily burning me and my Hollow chums. I crashed to the floor, begging for the pain to stop. I slowly rose, only a sliver of health left. About 100 meters ahead, the drake rest on his perch, which just so happens to be my planned destination. Things just became infinitely more complicated…

That one dude you see on your computer, you basically comments on everything because he's an avid fan of all things gamey and stuff. Yeah... that guy. Right there. See him? Yeah...he's kinda weird.