The world is on the brink of despair. Not so long ago, we prospered in a relative paradise by exploiting what was available in nature around us. But now that we’ve learned our actions affect our environment, the story has changed. Though we know our fuel taints and pollutes the environment and has disastrous consequences on our society, we desperately cling to the last few sources of energy left. And who can blame us? Without it, humanity as we know it would cease to exist.

True to our predictions, we’re running out of fuel fast. Though there have been rumors, promises and initiatives, clean and renewable energy has so far proven impossible. It will take the effort of a veritable god amongst men to save us from the impending disaster.

My friends, welcome to Dark Souls…

The lore and setting surrounding Lordran – the history of the world of Dark Souls – is unique in its ability to resonate with those of us who listen. Countless fans have dived in to better understand it, and most of us came out the other side with the feeling that we knew things that some had said were unknowable. I like to think of this as the achievement within the achievement. It is, in my opinion, one of the reasons why Dark Souls stands so far above other games; the delivery of the story (or rather, the lack thereof) doesn’t pull any punches. Just like the gameplay. But now isn’t the time to heap more praise on the game (I already did that).

Dark Souls is also very good at taking millenia-old stories and repackaging them in a way that creates something new – like when Miyazaki repurposed elements of a Dionysus myth and applied them to Crossbreed Priscilla.

Soon, the Flames Will Fade…

Throughout time, there have always been myths, scares, prophecies and predictions that spell out the details mankind’s doom. While some certainly had more merit than others, the amount of effort we as a species have put into describing our future demise has always fascinated me. I was so intrigued, in fact, that as a psychology major I decided to take an elective called Apocalypticism. Yes, that is exactly as cool as it sounds. One of my final projects for the course was comparing and contrasting public perception of climate change (back then it was called global warming; before that it was called global cooling) to perceptions of Y2K back in 1999. The Y2K Problem, in case you didn’t know, was a scare in the late 90s because people thought computer calendars couldn’t count high enough and all our systems would break after rolling over to 01/01/2000. Or something like that. In that particular “nightmare scenario,” some computers would start to think it’s the year 1900 and stop being able to run critical software. Having just recently established a reliance on these rarely-understood machines, that was a scary prospect to many. …and Only Dark will Remain

At the heart of most discussions about climate change lies humanity’s current dependance on fossil fuels. As living beings, we have naturally pursued paths to survival and prosperity. We progressed from hunters to domesticators; from domesticators to farmers; from farmers to specialists; and so forth. Each era had its own built-in dependencies: the dependence on good weather, on literal horse power, on our community. As we’ve stairstepped into our current situation, we’ve attempted to mitigate risk by shifting dependence from things we have little control over (the weather) to things we have more control over (oil production).

Since the nineteenth century, the industrial world has created an infrastructure contingent upon the relatively new energy sources available to us. Which makes sense; why make a horse pull a plow when you could make an engine that does it better? Horses are expensive. And cute. The population soared only because of the explosion of fossil fuels – its efficiency eclipsed every other energy source before it. Because we created this infrastructure, humanity was able to grow by leaps and bounds. We leapfrogged over our roles as specialists. We became tycoons. Physicists. Astronauts.

As a whole, we’re fortunate to live in a place where there are constant discoveries – new sources of fuel, new methods to refine it, better ways to use what we have. Now imagine if all that slowly ground to a halt. One by one, our fuel tanks empty, our refrigerators grow warm and our lights go out. A tractor that was once able harvest enough to feed hundreds now rusts in a field. The fittest and most ruthless among us steal what’s not hidden by the furtive. That which is hidden is forgotten, either scavenged or swallowed by the dark.

But what if we never truly understood this fuel in the first place? A fuel source found by people who knew nothing compared to our 19th century selves? What if, instead of harnessing our fuel, we allowed our fuel to harness us?

The Strength of Lords

Ever notice how “they,” the beings from the dark, are so decrepit and primitive? Take a closer look. They resemble Hollows. 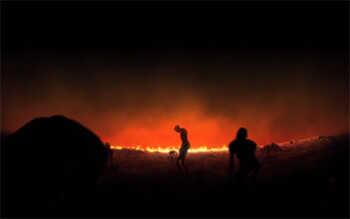 Then, from the Dark, they came…

What happens between this frame and the war with the dragons is anyone’s guess. A cursory glance tells us that Gwyn picked up the Lord Soul and suddenly he & his crew were sporting some new duds. But as with life, in Dark Souls a cursory glance doesn’t usually give us enough facts we need to make an educated decision. The simplest explanation is that it took time and effort for them to prepare for war. The gods never had a chance or desire to become familiar with their fuel the way we did. They discovered it when they had an immediate need. By the time they realized their fuel wasn’t infinite, it was too late to understand it.

The Witch’s folly, subsequent fall of Izalith, battle at Ash Lake and the seal on Gwyn’s fate was a matter of the gods misunderstanding their fuel and taking it for granted. Are the parallels between Lordran’s Lord Souls and our fossil fuels coincidence, or were Miyazaki and his team trying to send us a message? We may never know. But the next time you put gas in your tank, maybe you’ll understand what it was like to live in the last days of Lordran’s glory.

Addendum: I’d like to thank the folks participating in the discussion in the forums. Emergence in particular had some points I didn’t think of. Emergence asserted, “I don’t think that the sludgy, viscous nature of humanity in Dark Souls is a mistake, and that’s further highlighted by how flammable it is. You burn it to reverse hollowing, firekeepers who keep the bonfires burning possess infinite humanity…”

What do you think? Join the conversation here.