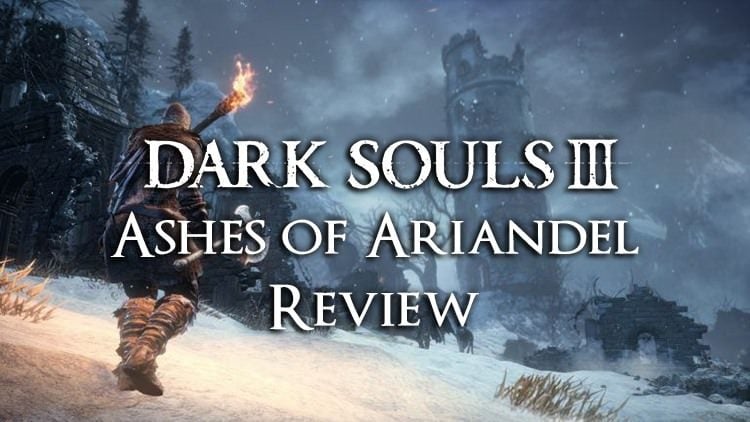 The long awaited first DLC for Dark Souls 3, Ashes of Ariandel is upon us and as the weather begins to turn cold for parts of the world, this expansion serves as a chilly harbinger of things to come. Dark Souls 3 was a full circle sendoff to the diehard fans of the series, giving players both the new and familiar as it closed out it’s iconic trilogy. Expansions for the past 2 games have set high standards for DLC, bringing large new areas to explore, full of new weapons, armor, magic, bosses and lore. Does Ashes of Ariandel stand next to those past releases or does it leave players out in the cold? We find out in this mostly spoiler free review, sensitive to players looking forward to its release next Tuesday. We also waited to publish until trying the new balancing patch, to ensure that the new changes don’t dramatically alter the game in any way.

The expansion takes place in the frozen Painted World of Ariandel, a location that conjures up images of the first Dark Souls and its similarly named Painted World of Ariamis, but that’s where the parallels end. This is a new area, with a new layout, and it’s expansive if not a little barren. There are some unique geographical elements here: a snow laden valley, an all but abandoned village, a signature cliff portion and a final piece of reverent architecture that we’ve come to know across all Soulsborne games. Accessing the content is similar to other past DLCs in the series, and involves you speaking to an NPC at the Cathedral of the Deep where you are whisked away in an all too familiar fashion.

The story and motivations for your journey are predictably obtuse and puzzling at other points but there are some lore payoffs here for the studious. The descriptions for the new items and spells flesh out the new tale being told, but they also connect back to the events of the base game, giving players a few “aha” moments as they piece together the location’s history. 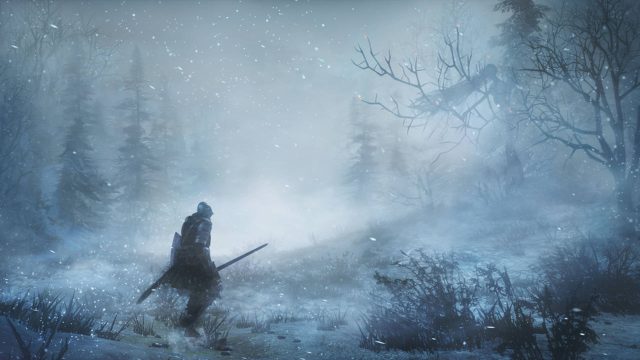 The theme of the expansion is frost and everything in the content is designed with it in mind. We have the obvious snow and ice environments that inspire chills on sight as well as several new spells and items that reinforce this theme. Enemy design takes on a similar Viking like inspiration, with accouterments and flair that indicate a culture of harsh elements, as well as other foes like packs of wolves, and trees that seem to be bracing themselves against a harsh wind. This gives the environment an austere feel and makes the game’s signature bonfires feel all the more warmer in contrast.

The bonfires may be welcome in sight, but not entirely necessary in practice. The amount of content itself makes the entirety of the DLC on the short side. You can complete this in a long session if you’re committed. Although the area itself is not small, it is sparsely populated and can be run through rather quickly from section to section. This does work in the sense that when encountering a singular foe, like a particular mini-boss or NPC, the isolation adds to the cinematic tension of battle. 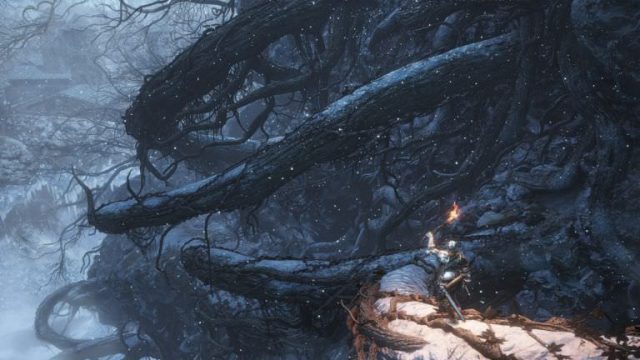 Otherwise, beyond a couple of rehashed passages to somewhat hidden areas, the content is very plainly laid out, and the DLC does lack that signature element of surprise and discovery. Every new item to be found is more or less scattered along your way, and none of it is too particularly difficult to obtain. Fundamentally, Ashes of Ariandel is designed around arriving, advancing and challenging the boss. This is a straightforward formula that is sometimes refreshing but in the case of experienced vets, can be a bit jarring. We’re used to things being a lot more circuitous, so call us spoiled. Or scarred?

The expansion offers players more of the familiar gameplay from the Soulsborne series and augments it with a variety of new weaponry, armor and spells. This is the DLC’s strongest contribution and many of the weapons will be instant additions to player arsenals. There are 15 in all if you include shields, and they are carefully selected across a spectrum of the game’s weapon categories, meaning that enthusiasts of any kind should find something to play around with. A few also take the formula a step further and add elements that we haven’t seen before, and it will be interesting to see if it and some of the others transcend novelty use. Overall, many of the weapons provide very fresh applications and feature inspired skills that will leave their mark on the PvE and PvP landscape. 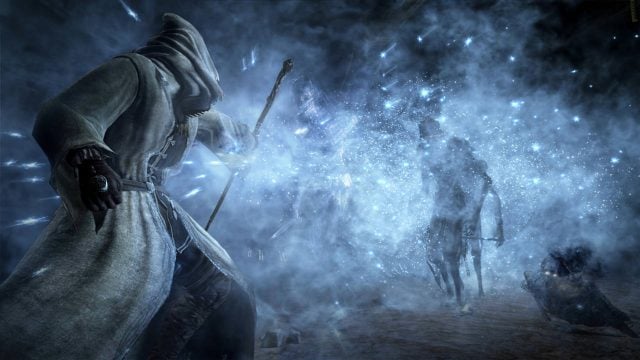 The armor sets provided also fit well with the frozen theme, if not a little uninspired. There’s a lot that seems borrowed from past games here, but a few of the pieces are worthy additions to the Fashion Souls wardrobe.

There are 4 new spells for players here and though they are few, they are useful and fill immediate roles. Past Dark Souls expansions have been criticized for introducing spells that were so similar to existing spells as to be indistinguishable, or were such clear improvements that they rendered the old spell pointless. The spells presented in Ashes of Ariandel have more thought put into them, and each one of them does something quite unique. Projectile, turret, weapon buff, and mist, and each with their own tweaks on that formula. The key here is that they are all fun to use, and as a result we should see an immediate proliferation of them when tackling both human and in-game enemies. 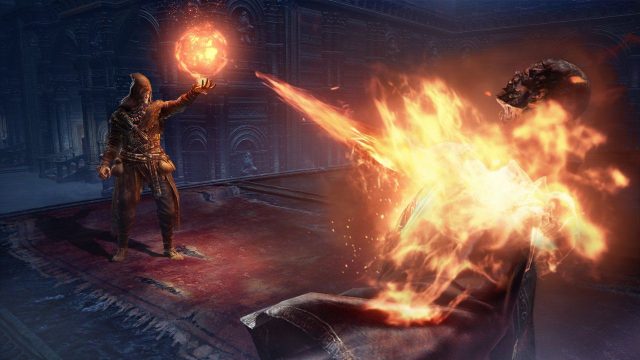 The enemies in Ashes of Ariandel are mediocre. There are some definitive highlights, some of which are the stuff of player nightmares. At their best the new foes are lethal, fast and dynamic, posing an impressive and memorable challenge to players. At their worst, they are reskins of old enemies, which is something the series is unfortunately getting a slight reputation for. Overall, they are appropriately hideous when they need to be and several provide significant gross out moments, but wind up mostly unmemorable fodder on the way to the bosses. 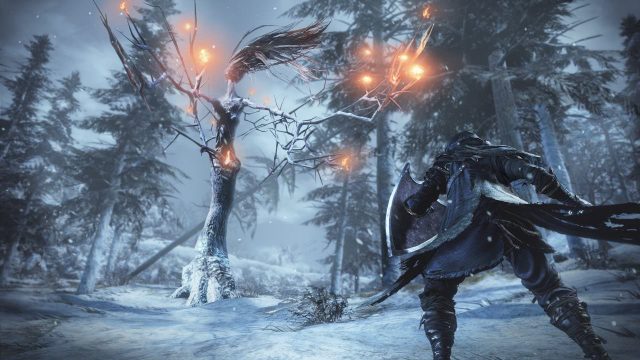 The bosses, of which there are 2, are the most memorable portion of the DLC, although as with much of the DLC, it’s the strength of 1 that carries them through. Without getting into spoilers one of the boss fights is a bit of an homage to the past, as so much of Dark Souls 3 is and provides a nice flavor even if the fight itself is fairly run of the mill. The main boss of the content however is a doozy and is going to rank up there with the pantheon of ass kicking bosses. It took me several hours to get through the entirety of the expansion, and this boss constituted a quarter of that time. At the risk of sounding cliché, prepare to die. It’s an instantly iconic boss with multiple phases and surprises in store for players. It also brings the entirety of the expansion, lore included to a complete full circle, helping to finish things on a high point.

The expansion also brings the new Hollow Arena, a dedicated PvP battle zone. It’s mostly an add on for the fans of the series who have been begging for an arena in this iteration and it delivers in that respect. There are 2 distinct game modes, a 1v1 Duel to the death and a multiplayer Brawl. The Brawl should draw the most activity with its variety of team based and free for all permutations. Players compete to rack up the most kills during timed matches and the formula from past games has been tweaked for the better. Estus use is limited, respawns are protected with a concussive Wrath of the Gods, and kills restore some health giving the battles a much more structured feel when compared to something like the Battle of Stoicism in the first Dark Souls. Launching in as easy as porting from a bonfire. It’s an addition towards longevity and will no doubt be drawing combatants for months. 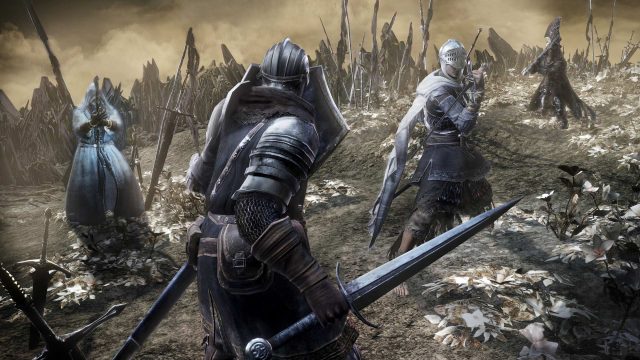 Ashes of Ariandel is a good PvE expansion and a really good PvP expansion, so you’re experience with it will be varied depending on your affinity for either. The content is shorter than usual for Dark Souls expansions, but it does bring a good amount of well designed equipment and spells that should fit nicely in player setups. The bosses are an invigorating affair and will challenge even hardened vets. The PvP arena gives players another means of ongoing value and evens out the entire content’s offering. While the content can be completed in a casual weekend, there is enough going forward with the new gear and arena to keep diehards satisfied and dying over and over again, as we are all well accustomed to by now.

8
Summary: A piece of content that falls short of past expansions in length but makes up for it by adding a well designed assortment of weapons and spells as well as some memorable boss fights. The addition of the arena adds longevity for PvP fans or those just looking for a rumble with friends.
Gameplay (8)
Visual & Audio (7.5)
Replayability (8.5)
Story & Setting (7.5)
Pricepoint (8.5)