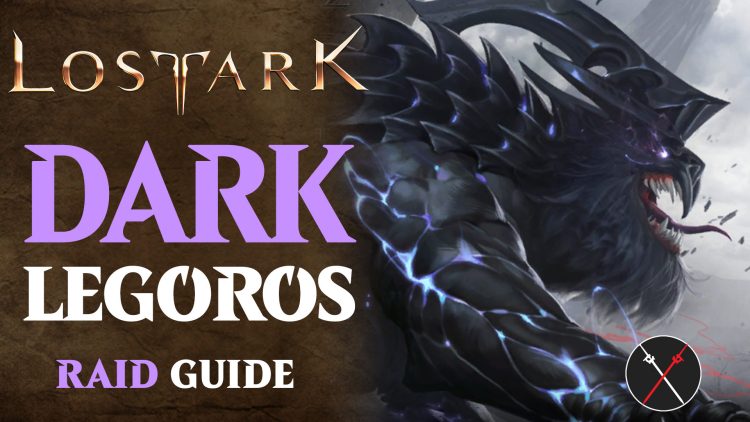 After honing your gear sufficiently, you’ll reach Item Level 802, which will allow you to fight the first Level 3 Guardian Raid boss in Lost Ark. Defeating Dark Legoros will reward you with higher-tiered Rare Accessories, a Rare Ability Stone, and honing materials, to name a few.

For these types of activities, it’s important to allocate the right Tripods for your Skills. Since this Guardian is weak against Holy, you’ll want to select Tripods that ought to change the element of your damage if possible. Doing so will significantly improve the amount of harm you inflict. Next, you’re going to want to equip HP Potions or those that restore a percentage of your HP since they’re the only ones allowed in Guardian Raids. Alongside this are Flares, which are essential to identify his location quickly given the size of the map. 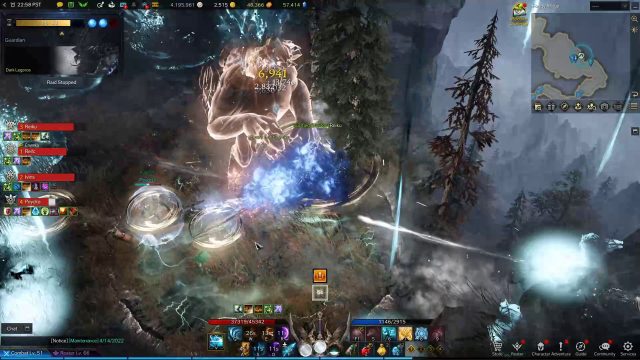 You should also remember to bring Panaceas. Unlike Icy Legoros who focuses on dealing ice damage against players, Dark Legoros has abilities that allow him to inflict blindness, which lasts for 20 seconds. To be able to see once more beyond a small range of vision, you’ll have to use a Panacea after you’ve accumulated enough blind debuff stacks. This lets you save enough of the item for succeeding stages in the encounter. Let’s talk about the debuff more in the next section.

Dark Legoros inflicts blindness, which results in very limited vision. This is particularly difficult for ranged Advanced Classes such as the Sorceress, Gunslinger, and Sharpshooter because their surroundings will be pitch black. As such, they’ll be forced to approach the Boss to target him. This Guardian can also keep attacking you to increase the debuff’s stack to a maximum of 5 to considerably limit your range. 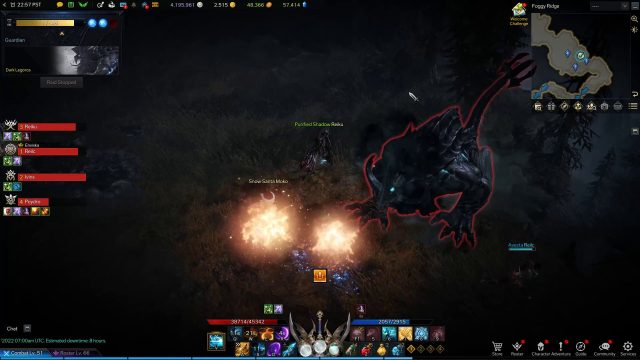 What’s more is that on the 4th stack, Dark Legoros will disappear in a split second, only to hit you from behind using both of his claws, which is lethal as you’ll be dealt with high damage that you can die from. To prepare for it, remember to keep moving or pop in a Panacea.

Like the majority of bosses, Dark Legoros will suddenly glow blue to charge at whoever is in front of him. Note that the period between changing colors and rushing forward happens in an instant so you have to be prepared to sidestep to avoid the attack. Dark Legoros is quick and if you get crushed, you’ll be knocked down. If you manage to combat this move with a Counter Skill, he will be staggered, which would allow you and your allies to hit him hard for the time being. 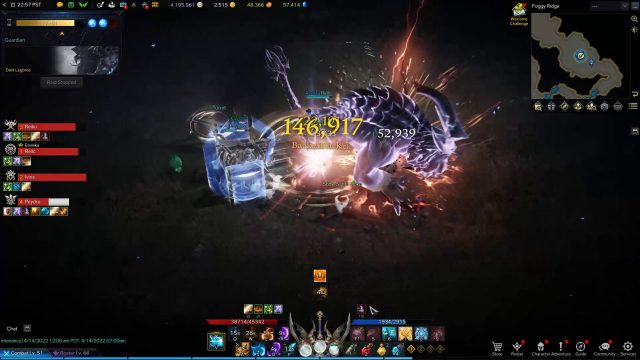 Additionally, this Guardian can also charge without glowing blue. At which point, no one from your team can use a Counter Skill to stop him. He’ll simply turn towards you to knock you down and deal low to moderate damage.

There are several queues when Dark Legoros is about to perform his blinding breath attack. One of which is when he performs a mini leap in place. The skill can be pretty tough to spot since it happens instantly but as long as you have quick reflexes, you can simply dash farther away from him to avoid the impact. 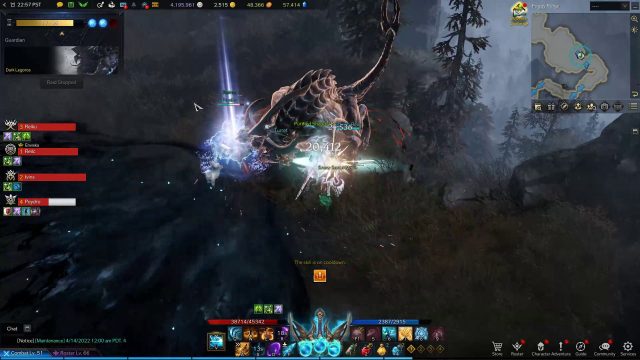 Alternatively, he will grunt loudly, lift his right paw and then place it back down on the ground, or breathe deeply before he does his breath attack that follows a fan pattern. This is quite simple to dodge from because you can easily dash to either side. However, if you’re one of the squishier Classes, and you get repetitively hit by the breath attack, you’ll be pushed back and can be killed in the process.

Hitting Dark Legoros with Point and Normal Skills is the best way to instantly damage him. This is because he performs a backward jump out of nowhere. What he’ll do is he’ll face a player and will suddenly hop backward. If you’re standing in front of him, be sure to quickly dash to the side to dodge any follow-up attacks. For instance, he can execute his breath attack to deal low damage and inflict the blindness debuff thereafter.

When you notice this Guardian’s paw trailing behind his opposite paw, he’s planning to strike with the former. It happens almost instantly so be sure to run to the side to avoid getting staggered and taking low damage. Note that he can then follow through with the other paw in quick succession when he intends to move forward to attack targeted players. 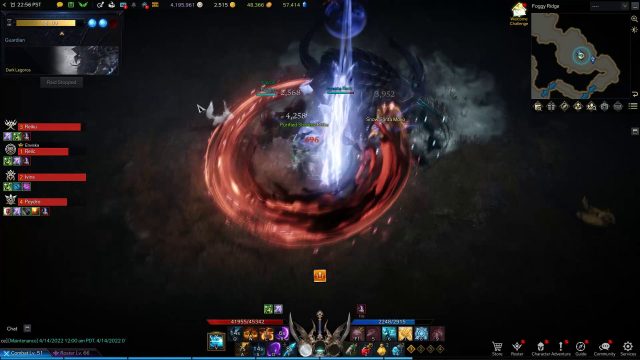 Dark Legoros will engulf himself in a sphere of energy and then vanish from thin air. The moment he does this, be sure to keep moving because he will suddenly spawn in a random spot near you and your allies to execute one of his attacks. For example, he can opt to strike you with his right paw. 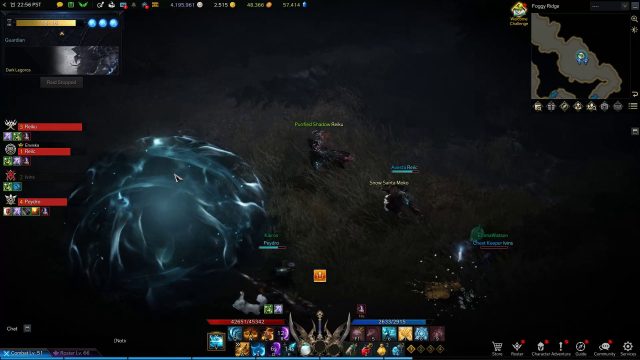 When Dark Legoros stops in place and rears his head upward, he’s about to summon multiple geysers on the ground. Remember to tread carefully because dashing may result in getting hit by them. If you do, you’ll receive the blindness debuff. The safest place to be is right behind the boss so you can opt to continue attacking him from this angle until the geysers and their subsequent explosions disappear. 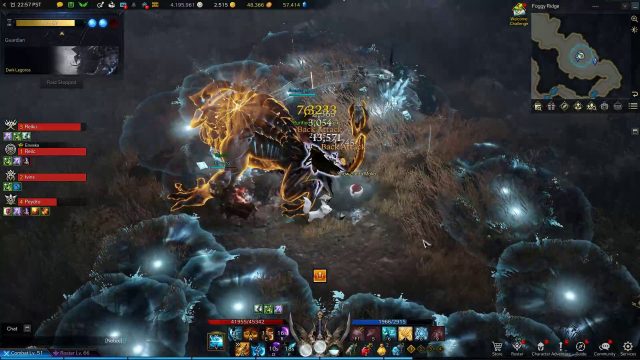 Moreover, Dark Legoros will also stand on his hind legs and roar towards the sky to conjure even more blinding geysers. As long as you stay close to him, you’ll be able to avoid these altogether.

Dark Legoros is surprisingly not harder than his brother, Icy Legoros, but he’s tankier. Although he’s aggressive and his blindness debuff is debilitating especially for ranged classes, the Guardian’s attacks can be circumvented by moving behind him constantly. Alternatively, you can also position yourself beside him if you wish. He also has the ability to teleport to another location by disappearing without using the same sphere of energy as his vanish skill. Thankfully, this won’t progress the fight to another phase, which would’ve made him stronger. 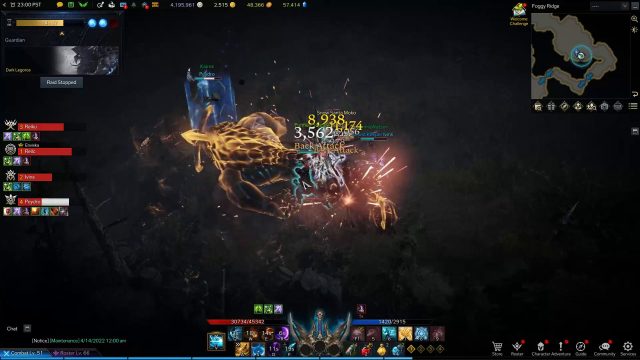 Remember to bring Panaceas in order to cleanse the blindness debuff stacks he inflicts. Don’t let it accumulate to 4x the stack to prevent getting assassinated from behind. And finally, staggering Dark Legoros enough will make this boss plop to the ground, allowing you and your allies to bombard him with a series of potent skills to finish him off efficiently.

Stay tuned for more Lost Ark Boss and Endgame Guides and be sure to check out our Lost Ark Wiki or drop by our Twitch Channel if you have questions about the game. You can also check out our recent endgame content including the Flame Fox Yoho and Vertus Boss Guides, Silver Farm Guide, Best Ways to Get More Skill Points, and Best Combat Engravings. We also have Build Guides for the Soulfist, Artillerist, Striker, Deadeye, and Bard, to name a few. What did you think of this Lost Ark Dark Legoros Guardian Raid Boss Guide? Which bosses are giving you a hard time? Let us know in the comments below!